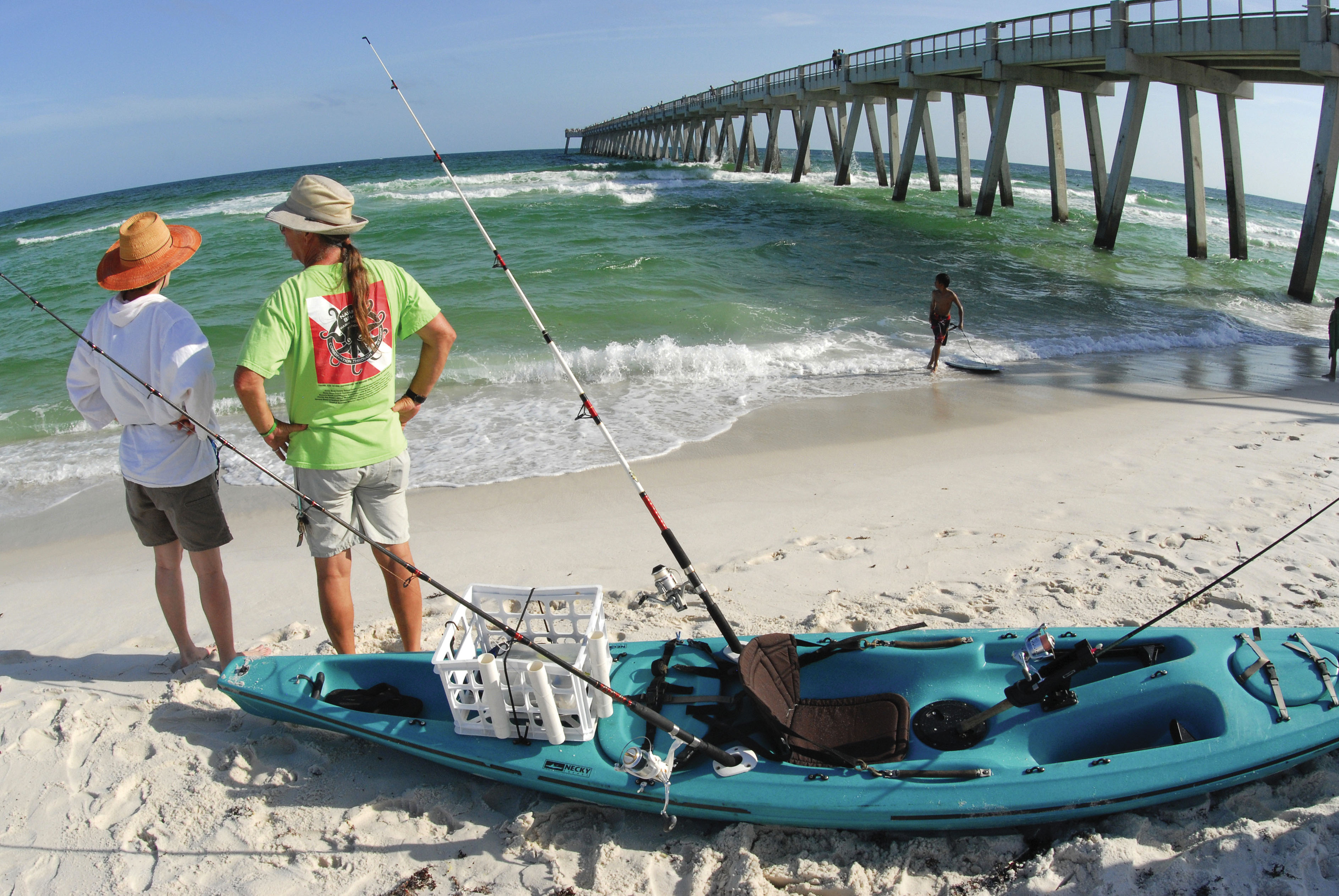 Judging the waves before launching. This area near Pensacola generally has a longer surf-launching kayak season, than South Texas.
Paddling a kayak offshore is a real trip, so to speak. There's a certain amount of satisfaction in paddling and catching fish of any kind, but paddling offshore is different.

It's certainly different from regular boats; you're down there close to the water with a wet butt and maybe a hungry gut, as old fishermen used to say, and it takes getting used to. It's also quiet; there's no engine noise or exhaust fumes. Waves come and go, and you make adjustments in balance that become automatic. You have to pay attentionthere's no napping out there, or ignoring a distant thunderstorm, and no speedy ride back in. Hook a big fish, and you can be towed for miles. If the reel's drag is too tight, it can actually flip the boat. Or a big bull shark can smack you around.

That's what happened to Glenn Madden, often known as Professor Salt, who teaches at Corpus Christi College. He targets Gulf fish from kayaks, and while doing so has racked up quite a few adventures. Like having his kingfish eaten by big sharks, one of which gave his kayak a good thumping as it lunged past him, only inches away. You definitely have to keep your cool out there, in a 'yak. He also fought a 5-foot mako shark that jumped repeatedly. That one seemed small enough to land and bring home, but it chewed through his wire leader and escaped. He's also lost a sailfish.

The standard kayak for these guys paddling offshore is a 12-foot, sit-on-top "ocean kayak" model. They're maneuverable, fast, and you can easily climb back aboard if you bail out. They say models shorter than 12 squat too deep, while a long 15-foot tandem, built for two fishermen, is less maneuverable when chasing after big, hooked fish. It's the 12-footers that are making the big catches.

"Last summer I hooked a big king right off the Aransas jetty, and that fish made a crazy run right under a passing barge," says Madden. "I had to paddle backward, the tugboat was honking. We got clear, but then the king ran to the other jetty, right in front of a ship, which caused more problems. That fish measured 54 inches, we called him the suicidal king."

Lots of fun out there. Glenn and his buddies seldom weigh their fish, they can only measure them. Imagine trying to standing up offshore in a kayak with a Boga Grip, trying to weigh a 4-foot kingfish or bigger.

"I enjoy double-header hookups on kayaks, it keeps me busy," says Madden. "A couple of years ago, it was July 4, I hooked 31 kings, and eight were double-headers. I landed 23 and uploaded lots of video on You Tube. There were powerboats around me that weren't getting much action, so I advised them to shut their engines off and try drifting their baits."

The silent approach is a very effective way to catch kingfish, alternating a slow troll with occasional stops. And people are catching on. Consider that last summer's Corpus Christi Bluewater Kayak Classic had 121 kayaks offshore. Which puts it in first place these days in Texas, for number of boats signed up for a single-day kingfish tournament. The trend for 20 years has been faster and bigger boats, topping out at a quarter-million dollars or so, but today a tournament with 12-foot plastic boats with paddle power, draws more entries.

How times have changed from the early 1980s, when family-owned boats of all types signed up by the hundreds for long weekends offshore. In 1999 the Southern Kingfish Association (SKA) arrived in Texas, with bigger, faster boats, but lower participation. That concept finally collided head-on with the economy in 2008. Today, it's kayaks that lead in numbers. (Jacksonville, Florida had seen the same thing happen there, though so far they've restricted their huge kayak tournament to inshore fish species).

In Texas, the Bluewater Classic has a modest entry fee and prizes. "The tournament only pays about $1,200 for best 2-fish kingfish stringer, but when you've spent $10 all day on expenses, then first place doesn't look too bad," says Madden. "Entry fee is only $30 bucks, because they like to encourage new people to get into the sport."

Kevin Kieschnick, who is tournament director, says, "This year check-in will be at the pavilion behind Bob Hall Pier, at Padre Balli Park. "Fishing day is Aug. 2. "Online registration should start on June 1 at www.bluewaterkayakclassic.com. All rules and info will be posted there. And also as a sticky on www.texaskayakfisherman.com
under the BTB section."

Anglers generally visit and register the evening before, and are free to launch next day at first light, anywhere along the beach or in Port Aransas. From there it's a mad scramble to paddle offshore for that prime, early-morning bite. In the mid-day heat of summer, these guys know kingfish may go deep for siesta.

"Four years now, I've been fishing this tournament," says Madden. "Third place was my best fish. Last year I took a long shot at Port Aransas, paddled out to the ships that anchor offshore 4-5 miles. Worked it and the jetties hard, and there just weren't a lot of fish. The kings shut down that weekend where it had been good for days, and they returned soon after. The guy who won the tournament, they say he put on a clinic offshore, landing two kings that totaled 92 pounds. That's a 46-pound average"

These guys have caught bull redfish, big jacks, red snapper, even tarpon. At least, they've had run-ins with tarpon. Glenn and a friend were trolling the beach with big Storm plastic swimbaits, knowing jackfish were running in large packs. Both guys hooked up. While Glenn fought a kingfish, his buddy hung onto to a huge tarpon that pulled him miles offshore, out of sight. This guy later swore it was eight feet long, but his video camera ran out before he got it alongside the boat. The fight drew near a Gulf platform, and the tired fish finally sprinted through the structure, cutting the line. If it was eight feet long, it would have been a state record. But getting that tarpon back to the beach with a kayakthat would have been like the Old Man and the Sea, when sharks ate the catch while it was tied alongside. From a kayak, that would have been a dicey experience if Mr. Bull Shark came calling for lunch.

Kingfish exceeding five feet have been hooked and lost from these kayaks, though I haven't heard of a 50-pounder landed yet. But it seems only a matter of time before the STAR tournament kingfish is won by a kayak angler.

"Ribbonfish seems to be the best bait out there, and the bigger the better," says Madden. "Live ribbonfish don't wiggle underwater, they ease along with only their long dorsal fin undulating. So trolling them slowly from a kayak looks very natural. Catch your own ribbons, they're a whole lot bigger than from the stores. Sometimes I'll dress up the ribbonfish a little, with a Sea Witch skirt in front of it. A lot of times in the middle of the day, kings stay deep, maybe 20 or 25 feet, and a little weight certainly helps. There are also lures, like the Sebille Magic Swimmer. It's a high-dollar bait, I didn't want to feed a store-bought to a bunch of underwater chainsaws. So I ordered some blanks and painted them and they work good. They're 9 or 9.5 inches long, made of hard plastic. They have two joints, so they're in three pieces. Jointed lures wiggle more at low speed, so they're best for kayaks.

"One day we were offshore and I told my buddy there's a storm popping up, a little further out," says Madden. "I trolled around the rig once, and then headed inshore a half mile, then stopped and looked back. Richard was still out there, tied to the rig fishing, and the sky was turning black. I stowed my gear and hustled back out there, got him headed inshore, and we sprinted for two miles before that storm caught us. A black wall passed over us. Soon enough we had six-foot seas. It blew so hard, I could have lost my paddle to the wind, and the lightning was bad. But we tied down our rods so they didn't stick up. We basically surfed inshore and right up on the beach. I lost one rod and that was all. Today Richard is more careful with storms. Another group of kayaks got caught three miles from us. They had a tough time getting in. They had no platform around them for safety."

Why not climb a platform with a storm approaching, and pull the 'yak up there with you?

"Most of our rigs in state waters are really rusted and we sometimes worry about being under them. I was worried the administration was going to pull our platforms in state waters. Out of Aransas six miles, those rigs are gone. But there are still rigs we can fish off the beach from a kayak," he says.

"I tell some of the new yakkers to be careful out there, if they don't have much experience on the Gulf," Madden said. "Or even common sense while boating. We had a guy show up one morning offshore, no life jacket, a Pelican kayak with a leak in it. He'd been reading the blogs, and was fired up to get offshore. I lent him a hand-pump and he used it, but with water still coming in, we advised him to head for the beach. He started back, but after a half-mile he fell out of the boat, it was too waterlogged to continue. We paddled over and he held on to my boat, while my friends pumped out his 'yak. While holding on, he got his ponytail hung up in my kingfish plug, and we had to cut him loose, he lost some hair. He climbed back in and made it back to the beach, but I worry about those guys. We haven't seen him again."