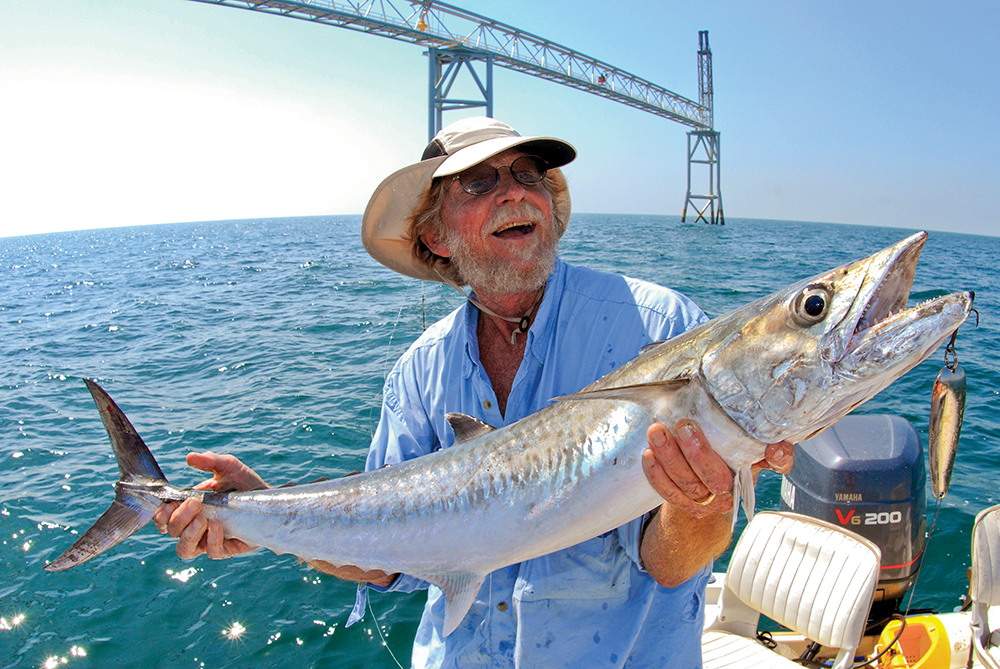 Pete Churton with a spoon-caught kingfish off Sabine Pass.

Kingfish are summer’s gamesters off the Texas coast, a fast-hitting racecar of a fish that can jump and run and maybe spool a reel while scorching a rookie’s thumb.

This is a strong fish, but they can be caught on sporty tackle—something lighter than standard 4/0 Penn partyboat tackle, which is sturdy gear meant for controlling fish and (hopefully) not tangling other lines.

Some of the best days I’ve ever seen with kingfish (when we weren’t tournament fishing) happened while using lighter tackle. Lighter being relative: not ultra-light gear, but reels like the Ambassadeur 6500 or something equivalent, packed with 20-pound line. Mounted on medium-heavy action, seven-foot rods. And dark-colored, 69-pound wire leader with a tiny black swivel. Using this type of tackle on kingfish is great for developing angling skills. It requires finesse; you’d better be quick on your toes, adjusting the drag, avoiding all obstacles before finally stopping the fish. Twenty-pound line is tough in the right hands, but these fish aren’t called “kings” for nothing. Even schoolie fish, averaging maybe 12 pounds, will make you work.And what a great bargain they are; a flashy fish and a serious fighter, followed by a fine meal afterwards.

Hook a bigger king on this gear, and you’d better have the boat cranked and following that fish within 10 seconds or so, because they can easily spool a reel.

If practicing catch-and-release, lighter gear does present a challenge. To avoid catching and wasting these fish, they have to be landed in a timely fashion before growing too tired to swim. Ideally unhooked and returned to the water head-first within 20 seconds or so, because they expire quickly. If you toss one back and it sinks, that’s dinner for sharks. The best method we’ve found for landing kings without harm is to grab their hard, bony tails and lift or swing them into the boat, onto a cleared space. Eight-inch needle-nose pliers really help removing the hook, preferably a single hook with the barb mashed flat, instead of treble hooks. If done properly, releasing kingfish works and this isn’t just speculation; we’ve tagged and released several hundred Galveston kings and had interesting recaptures in faraway lands, from the Yucatan to Cape Canaveral.

Keeping smaller kings, say 8-10 pounds, is great for a backyard cookout. The smaller fish are safer to eat because they carry less mercury, compared with bigger kings. We’re quite fond of round-cut, kingfish steaks on the outdoor grill, after soaking them for an hour in Italian salad dressing.

Bigger kings should be released, except in a tournament situation. This year’s 40-pounder might be next year’s STAR tournament winner. One year we tagged and released a 30-pounder, and a year later friends caught it about 12 miles away. It actually won money that weekend in a Galveston tournament, which required a three-fish stringer total. It was one more example of kingfish karma.

Kingfish season is here and I’ve been thinking about memorable light tackle days over the years.

Ever catch a king with a canepole? Hook up with a king with only 20 feet of line on a Calcutta canepole, and “It’s just you and him,” as my Cajun friends would say. Talk about focus and attention…and hanging on for dear life. Anyway, one summer aboard one of Captain Elliot’s partyboats out of Freeport, they were using canepoles to catch kings and bonito. Schoolie kings were chummed alongside the boat, and then baited hooks dropped overboard. Each canepole took a mighty bend, sometimes halfway under the boat, as each fish went into overdrive. People screamed and hung on and somehow none of the canepoles were lost that day. It was brutal action at point-blank range. They must have been using 200-pound line that, aided by the canepole’s mighty flex, just would not break.

Several times while anchored over a snapper rock offshore, and chumming, we’ve had great action targeting surface kings when we switched to topwater plugs. Poppers and “walk the dog” Spooks worked well, with kings jumping all over them until one was hooked. Fighting the fish and then unhooking two treble hooks was fatal to the fish, however. When we’d boxed limits, I solved the problem by removing the hooks. From then on it was pure fun, jumping many kings up to eight feet high. If one got a solid hold of the plug, it would bolt 20 or 30 yards before dropping it. Whereby more kings would jump over it. My record was four different kings grabbing that plug on a single cast. At the end, the plug was filling with water and completely fuzzy with tooth marks. (I kept it as a memento on my desk for years.) Those fish were chummed down-current with shrimpboat cull.

After the Gulf shrimp season starts in July. Ideally the shrimpboat you’ve picked is anchored, left its running lights on after pulling all night, and the crew is busy sorting and dumping the leftover cull, attracting all sorts of marine predators. The technique is to pull right up to the tires on the shrimp boat’s stern, peering down into the depths for ling. Your boat’s engine is cut, or left idling, while (ideally) a moderate current slowly carries you away. Toss out cigar minnows with baited hooks, let them sink deep, and wait. The strikes from kings, bonito and jacks are sudden—they just grab and run. And fighting them on 20-pound line is a workout. It can be more savage action than a summer’s worth of bay fishing. Years ago Joe Doggett and I were guests aboard Capt. Howard Horton’s boat off Galveston and that’s exactly what we did, fought those fish all day, chasing them around the boat. And we were using the same Ambassadeur 6500 reels still used today. As Doggett would say, “It was a good session.”

As mentioned before, friends of mine in Beaumont have been slinging big silver spoons with this same tackle for 35 years, catching and releasing kings up to 55 pounds. When they take out-of-state relatives offshore each summer, it’s the same deal, a pure slugfest on days when the fish are biting. They either hook their boat to platforms or drift close by them when the current is light. Their spoons go deep and cover the depths, right back to the surface. Slamming spoons into three and four-foot kingfish, sometimes at close range, is exciting work. It should be noted here that working plugs, jigs or spoons back to the boat through feeding kingfish can be a little hazardous. They may jump after the lure just as you lift it from the water, traveling right into the boat or completely over it. I’ve had one land on the gunnel next to me, and I shooed it overboard with my rod butt. Also had a jumper hit me in the back of the neck, while I was swimming alongside the boat with a camera. That king jumped after someone’s jig about 15 feet away, flew a rainbow arc and hit me and the boat with a smack and a blinding splash. My buddies saw the incoming king and were slack-jawed. Somehow I wasn’t scratched.

It pays to stay alert offshore, when dealing with kingfish. And when using lighter tackle, you’d best be on your toes.