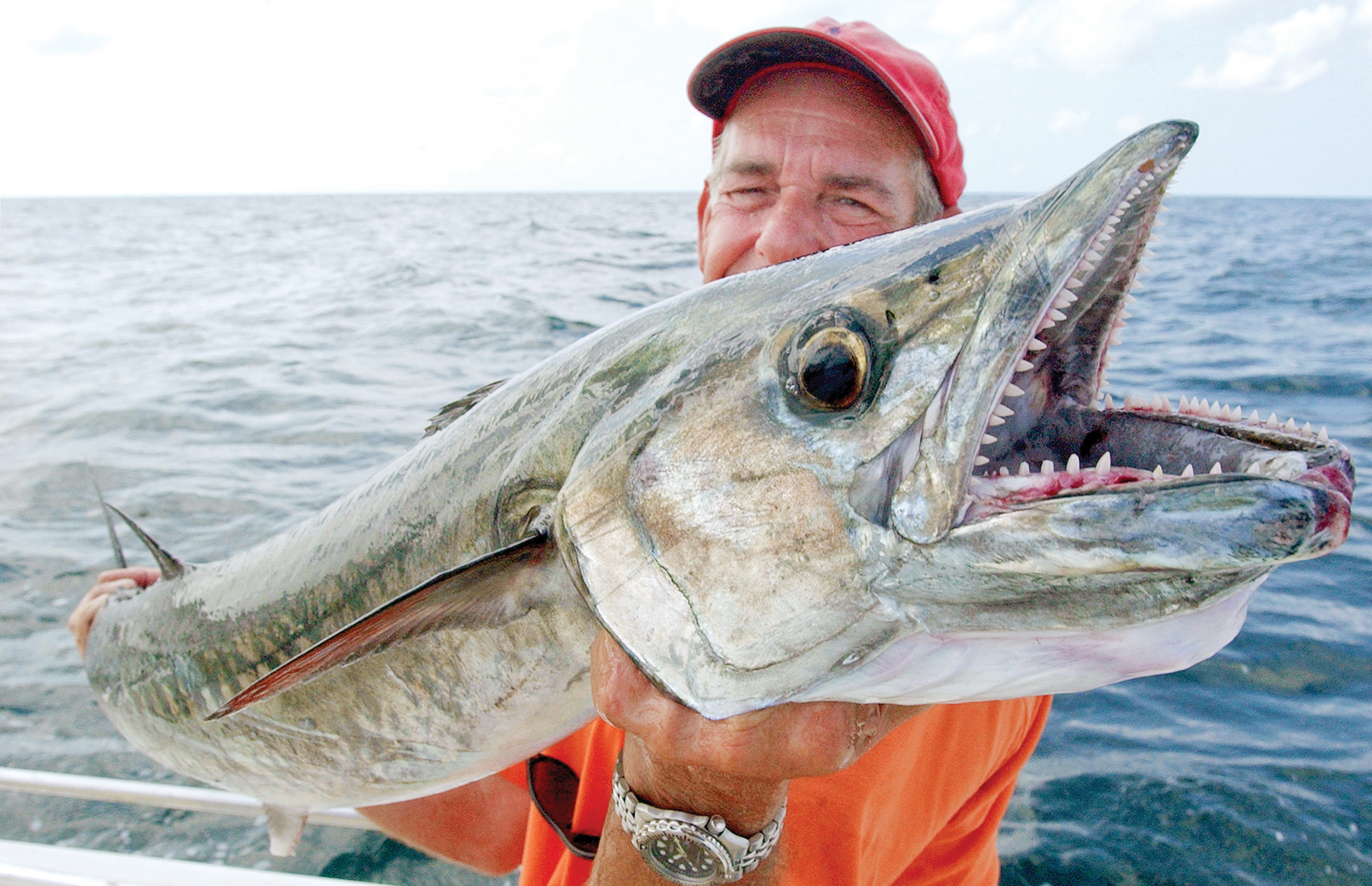 Kingfish caught off the upper Texas coast by Dale Fontenot. Sharp teeth as well. This one was released. Photo by Beaumont’s Pete Churton.

Lots of kingfish are caught off the Texas coast every summer, but there are also what I call deceiver fish sometimes mistaken for kings. A big Spanish mackerel looks very much like a young kingfish, because both have spots. There is also the cero mackerel growing to 12 pounds, though it's rare off Texas. I've even seen wahoo mistakenly weighed in as kingfish in tournaments, though not often. There are many kinds of fish out there.

It's always good to know your fish ID, however. Get into a school of Spanish mackerel mixed with small kings, and you'd best know your fish before the game warden comes calling. Another bonus: you can pick out prime fish from a mixed catch. Spanish are tastier than kings, and the cero is the best of all three. And of course wahoo fillets are like turkey breast.

The same mistaken identities sometimes happen with wahoo and barracuda, at least for a few minutes. Troll a lure around a platform in blue water, watch it disappear in a boil of foam, and you might have either one–while targeting kingfish. Both of these alternate species and the king have a different style of battle however, and an experienced captain will know the score within minutes and sometimes seconds. For the part-timer, a closer look when the fish is alongside the boat will show which of the five species he's hooked up with.

An experienced angler can spot the subtle differences in the three mackerels, at least up close: The Spanish carries a coal-black dorsal fin, while the king's dorsal is a dull gray. And the cero, which is really a tropical mackerel from coral reefs and rum latitudes, has abundant yellow dashes instead of dots, along with a long golden stripe down the middle that is impossible to miss. Let's look at these deceiver fish:

These tasty, sporty mackerel show up in decent numbers in the Texas surf in May and stay at least around the state water platforms into October. Great sport on the jetties, while slinging gold spoons; that's how we caught a great many of them over the years. One notable Labor Day at the jetties, Miss Amy and I put a hundred pounds of big Spanish in the boat, using spoons. This was before today's daily bag limit of 15 fish, which is very generous. Even now two anglers catching 30 big ones could still get very close to a hundred-pound day. The Texas record Spanish is 8.74 pounds.

But sometimes Spanish mix with small, three pound kings that favor the same artificial baits. They fight exactly the same, and have spots. Small kings seem to school in that year class, as well, and we've mostly run into them in July. I used to release these smaller kings, but after recently baking the filets from a 3-4 pounder, seven months in the freezer (vacuum-wrapped), they were so good on the table, we vowed only to keep only the smallest kings from now on. We release the bigger ones except in tournaments.

Spanish mackerel often fall prey to big kingfish. Mixing together when young, the two species part their friendly ways when the kings continue to grow up to five feet long and higher up on the food chain. Several times we've been shockedwhile busily hauling in Spanishto see a huge king skyrocket with a wiggling Spanish in his mouth. Once this happened only 20 feet away, a 50-pound king hanging above us in the sky with a three-pound Spanish held by a tiny piece of belly, wiggling desperately, before the king pivoted and came down head-first with his luckless prize. This was in 50 feet of water at a quiet platform we were tied to. It was years ago and we were slack-jawed with wonder. We later realized that slow-trolling a Spanish mackerel (dead) behind the boat will draw hits from sizeable kings, even right in the prop-wash. One day off Port O'Connor a king jumped at eye level with my trolled Spanish, almost hitting the cowling of our outboard motor, a near-miss. A little closer and it would have landed in the boat. Which might not have been as much fun, as it sounds.

The cero is the tastiest of the mackerel family, so if you catch one, save it for yourself! Unfortunately, this is a tropical mackerel that favors warm, coral reefs in southern latitudes, putting it out of reach of most U.S. anglers. On a typical day you can reasonably expect to catch a few ceros in The Bahamas while fishing the reefs. In the Florida Keys, at the northern edge of its range, the cero is often seen and they're a welcome bonus while reef fishing. Our own Flower Gardens coral reef off Galveston and Sabine Pass would seem to be the best bet for catching a state record. I've searched and found no listing for a Texas state record cero.

With the Florida record cero at 15.5 pounds, you can see how a mackerel of this size would be mistaken for a king, at least for several minutes. However, all of those golden markings on the cero are hard to miss.

These tropical mackerel hit the same jigs, trolling plugs and spoons that its cousins favor. And cero undoubtedly fall prey to hungry kingfish that grow huge in the Caribbean. A solitary reef mackerel of five pounds would make a fine dinner for a hungry, 60-pound king cruising along the coast of Cuba, for instance.

This is the heavyweight of the mackerel family, maxing out at about 150 pounds, a true pelagic wanderer found 'round the world. The Texas record is 124 pounds. Hook one of the these babies on lighter kingfish tackle, and you'll likely get smoked. In fact any number of anglers have been spooled by wahoo, and many remain convinced they were cleaned out, spooled by a big kingfish that couldn't be stopped.

Evidence: One day I was casting and working a 3-ounce spearhead bucktail jig with a stinger hook a foot behind it. Attached was a fresh 30-inch ribbonfish we'd taken from a shrimp boat back in Galveston harbor, when these prime baitfish are available in large size every August. The strike jarred me and the reel fairly smoked, the rod bent deep. We were convinced this was the kingfish we'd hoped for. Problem was, my Ambassadeur 7000 reel was almost empty in a few seconds. We cranked both engines and backed down at full speed, while I hung over the transom in desperation with a couple of feet of 30-pound line left on the spool. Soon, and about 100 yards away, there was a sudden flurry on the surface–what? We'd never seen a kingfish do that before.

Perhaps 20 minutes later and after many circles below, a ponderous shape appeared in the depths, a kingfish shape, but darker with tiger stripes. It was a 69-pound wahoo, with three rusty 8/0 hooks in his jaw, each hook connected through the eyes. The big fish had obviously spooled or broke off another angler, the year before. Who probably thought it was a kingfish, as well. Back at the Galveston kingfish tournament weigh-in, where we had nothing dramatic to weigh, we pulled the wahoo tail from the SSI cooler, just a little, hoping to alarm other contestants. But a beady-eyed old captain on the dock announced it was only a wahoo, which spoiled our fun. At least we had a pile of tasty fillets.

The wahoo is a formidable, pelagic predator shaped much like a king, but the wahoo's stripes are a quick giveaway. The stripes fade quickly in the fish box, but there is usually blue coloring left on the head. Wahoo teeth are smaller than a king's built like a fine saw blade, though still capable of clipping heavy mono leaders or inflicting harm. There are stories of wahoo flying into boats on occasion, one even sailing through a porthole right into the confined quarters of a kitchen/galley on a Pacific partyboat, creating mayhem on a hot stove

This joker is built much like the kingfish, though with a weaker tail. But with far more damaging teeth that can sever and cleave bigger fish with little effort. Oddly, the 'cuda is usually a poor fighter in deep water, wallowing sluggishly after the strike. On southern bonefish flats they can turn and burn however, sometimes jumping 25 feet on the strike–a thrilling sight.

Capable of hitting almost anything, the 'cuda is especially fond of live baits. Troll too close to a Gulf platform in blue water, and very likely that bait is sacrificed to razor teeth.

The 'cuda is widely scorned by some anglers, especially the tournament crowd. Why? 'Cudas have maimed big, hooked kingfish during tournaments, getting the king disqualified from contention. They're also toxic around certain coral reefs, carrying ciguatera poisoning, and since they travel widely, a poison fish may be caught far from any coral reef. On the plus side, they're handy cut bait for the deep-drop guys out in blue water.

Excerpted from the book The Kingfish Bible, New Revelations.