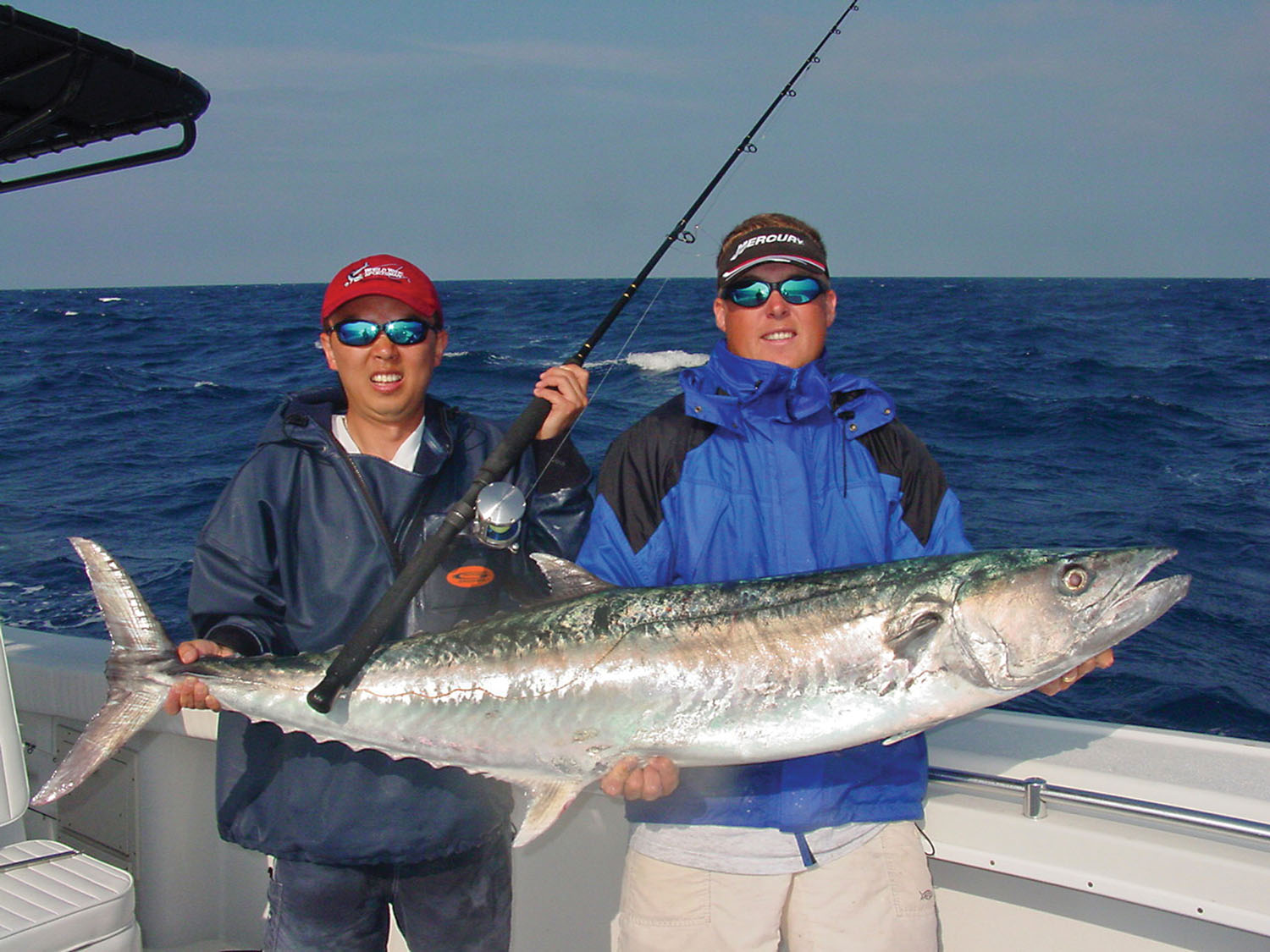 A seventy-plus pound kingfish in the eastern Gulf of Mexico. These guys were patiently trolling live bait.

On a number of occasions we have run out of bait offshore, especially in June, when we still hadn't caught our kingfish. It happens: the snapper keep biting until every scrap of bait is gone. The crew is on a hot bite, catching and releasing more fish. When they're done, they turn to kingfish. Especially if they're out in that broad zone between (A) deep-water billfish country, and (C) the inshore, green water zone in state waters, often within sight of the beach. Kings can be caught in all three zones, but their most consistent action falls in the (B) middle zone.

And catching more bait offshore is no sure thing. On one of our better trips last summer, we tied up to a rig at the first stop of the day off Sabine, way out there about 40 miles, and were startled to see a cloud of sweet cigar minnows milling around just below. Lots of them, sometimes 30 feet out from the rig, darting and flashing, never stopping, often running back to the rig for cover. Not an everyday sight, and what an opportunity to fill the live well. So, who on the boat carried Sabiki rigs that day? There were mumbled excuses all around. If we'd only had the right kind (very small flies on 6-pound line), we could have loaded the live well with bait. But of course nobody on the boat carried them that day. My Sabiki packs were left behind in a different tackle box...

So we pitched jigs with trout tackle, for small jacks and critters bigger than cigar minnows. But there was another problem: sometimes these guys can be very finicky. These had evidently been feeding all night on some cornucopia passing by in the current; one never knows what the Gulf will deliver. These jacks, up to 50 at a time, merely followed our jigs back to the boat. We knew it would be one of those days.

Other mornings these little fish can be ravenous, but not this day. We managed only four in the livewell, because we were all eager to head further offshore to a favorite snapper rock. Then, while running the last ten miles, our live bait stopper/sprayer in the livewell became dislodged from all the sloshing and the water drained out, leaving us with dead baits. (If it isn't one thing it's three others, as I'm fond of saying). Once we reached the snapper rock, there wasn't another rig on the horizon. Rigs can be scarce these days, thanks to the rig-killer stationed at Sabine.

So we enjoyed great snapper action, caught them until past noon, and then it was kingfish time. But how to tempt them? The other guys scratched their heads and mumbled. Fortunately I'd brought along a Tupperware box with some killer kingfish trolling baits that have lasted me a number of years. I'd jammed it into a locker, in a boat that held little extra room. We pulled anchor and began circling our buoy, and I set out a favorite blue/silver Rebel lure. Within a minute it was wham-wham one kingfish after another, slamming into this diving bait that is seven inches long. This plug has a modest, clear lip and it wiggled down six or seven feet where we could still see it, just to the side of the wake, and within a minute there was this big silver flash going sideways when a kingfish came out of nowhere. It was hard work after snapper fishing, but we boated 11 kings, some of them in the 25-pound range and one reaching 30 pounds. All on the same diving plug.

It was dicey work landing them, however. There was another problem: We were catching them for sport. Which means catch and release. And tailing (bare-handing) sizeable kings into the boat with treble hooks thrashing, is not for the weak of heart. Sure, your hand is safe from the lure at the far end of the king; these fish can't bend around like a shark. But in a crowded center console boat of only 22 feet, people have to stay the heck out of the way. It was not an ideal situation, but we couldn't stop fishing. And my crew members aren't exactly tourists, fishing these waters together since the early 1970s.

Ideally I would have rigged a few of these plugs with single, even barbless hooks for this kind of work. Releasing kings means working fast because they die quick, and that means working around live fish and flailing hooks. My pants leg was ripped above the knee by one thrashing king. And earlier that day, a big treble was cut off the back of my shirt: a trolling rod and big plug had been left in the center console's rod holder. I normally dodge around such hazards, but we were all running to get away from a feisty 35-pound ling that was thrashing on deck. I had to wait patiently for someone to cut me loose with a knife, while the ling thrashed only feet away. Either that or leave my laundry hanging in the breeze... Back at the ramp later that afternoon after a long day, my nice fishing clothes were in–what's the old Mick Jagger word? "Tatters." Ripped by big treble hooks.

One serious word of advice: If you're going to use treble hook plugs on kingfish and plan to keep smaller kings for home, gaff and slap them into a big fish box while everybody else stays out of harm's way. Or the smaller kings of 15 pounds or less can sometimes be bodily lifted aboard without gaffing, which doesn't make a mess. Just make sure they land in the cooler. A king will quiet down within a minute or so, and that's when a pair of handy, long needle nose pliers can be used to pry the hooks out. Since the nearest Doc-in-the-box is likely far away, it's always a good idea to carry a small set of bolt cutters on the boat, in case somebody does get hooked. By removing a hook, or at least a lure pinned to a buddy in the boat, it could save a lot of discomfort and maybe a day of fishing. We haven't had to use a bolt cutter yet, at least not on fishermen.

Some guides won't even troll lipped plugs for kingfish with their charter clients. Perhaps the captain had a bad experience in the past. People visiting from upstate may not be aware of the hazards of these fish and flailing treble hooks that can grab flesh in the wink of an eye. Someone may reach in without asking, trying to help out. These trolled plugs are also a hazard because they can fly out of the water right into someone's face, while the boat is underway. Overall it's best to troll just one or two of these baits, rigged with single hooks, after advising the group to stay in the front of the boat where it's safest. Easy to do: trolling action is at the back of the boat. In productive waters we only troll one plug, to avoid double-header hookups that can really complicate things.

I've been on quite a few kingfish trips and somehow during those adventures, nobody around me was ever hurt by a hook or a king. Nothing more than a little love-nip on a gloved hand, anyway. That safety record on king trips is probably because we used single hooks with the barbs filed almost flat, pinned to baitfish. The trips where we pulled lipped, diving plugs were certainly exciting, though. (I have been hit with big treble hooks offshore twice, but the culprits were an amberjack off POC and a gag grouper in Florida). With kings, we learned to work quickly around these fish back in our tagging days, when they had to be unhooked, measured and released in about 30 seconds. Fast but exciting work.

Anyway, I'm certainly ready to head offshore this month to battle more kings and shoot some new photos. If anyone is gearing up for kings this summer and wants a prep course in techniques, also some adventure stories on the high seas from Port Arthur to Port Aransas, my kingfish book can be ordered at Seafavorites.com.