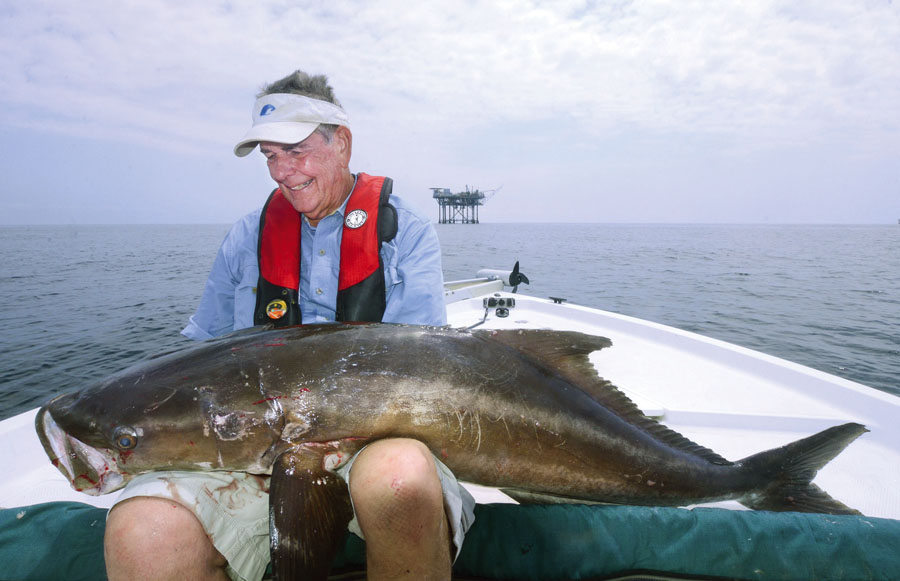 September might not seem like a prime month for catching ling offshore, but we've often had great luck with these fish after Labor Day. It's probably a mix of lower fishing pressure out there, with so many people turning to dove hunting or football. In addition, ling tend to gang up for some reason during early fall when calm weather arrives; perhaps they're thinking about migrating. In any event, we've found them schooling on top in calm weather in September, just like the good old days when these fish were more common.

Ever seen a brown patch of water on green? That's what it looks like, when 20 ling swim together on top. The older, offshore guys saw it during various summers when these fish were fairly thick back in the late 1960s. Anyway, last September we were startled to see the same thing, after Capt. Curtiss Cash in Port O'Connor told us where this might be going on. We bolted offshore and sure enough, 20 ling prowling on top at our first stop. We flung jigs and rubber eels at them, and they all turned and bolted. Not away from us, but after our baits! The water was thick with ling, and we put 10 in the boat, catching half of the school. All were netted and released, because we were looking for a bigger one.

Like the ling in the photo, friend Dale Fontenot of Vidor who "hammercocked" this estimated 70-pounder earlier this summer, gaffed and photographed by Pete Churton. Many of us, like Dale were raised in Southeast Texas, which certainly seems to have the most consistent ling action on the Texas coast, being so close to Louisiana. Ling can appear anywhere along the Texas coast, but you really can't beat far SE Texas for the best action during warmer months. We've seen schools of ling out there, often in September, and I knew one dad and son team in Port Arthur who used to fill the box with 30-inch ling back in the early 1980s, selling them like trout. That was highly questionable even back then, and ling today are protected from shenanigans like that.

Ling have seen some down years, and bag limits today are tight. That's why it was such a treat to spot brown water again. Landing half of that school of ling, we proceeded to Curtiss' next suggested spot, and it was an exact repeat, landing 10 more out of perhaps 20 ling on the surface. Our landing net was well-used that day, and the gaff never deployed. These smaller ling of 30 to 33 inches were greedy and fought well, and several of them jumped after being hooked, which we haven't seen in a long time. They were frisky. Later that night we filleted one fish that was barely legal, as they say. Back at Marilyn's house in POC, it was grilled on the porch. One bite, and it was enough to make your eyes roll back in your head. Life was good. And 20 ling in one day ain't bad.

We do try to handle smaller ling gently while releasing them. Any fish that can grow to exceed 100 pounds, and is worth so much in the tournaments, is worth extra care. We don't just derrick them into the boat and let them flip and bang all over the deck. We avoid letting them bang their heads against fiberglass. They're more frisky in the boat than perhaps any other fish, so it takes some care to make sure they go back in the water in a healthy manner.

Looking back, it was a September when we tagged and released so many ling, winning a tag trophy from Aftco in 1987. A wooden, carved ling that still sits on my desk. We tagged and tossed 107 ling that summer, big ones here and there up to 60 or more pounds, but most of them were 30-inchers that school in September. We'd pull up to a rig, a brown school would descend on the boat and mill around on the surface, and we'd get to work with baitcasting tackle with 20-pound line. It was warm work. Best baits were bucktail jigs, and the color didn't matter. There was no treble hook to contend with, just work the jig loose and wrestle the fish onto a measurement tape, toss the fish overboard and fill out part of the tag card. A number of these ling were recaptured in distant lands, so we laughed off any suggestions that these fish didn't survive.

Anyway, finding a school of ling on top offers great action, especially if you have matching tackle. And September is the time to do it.