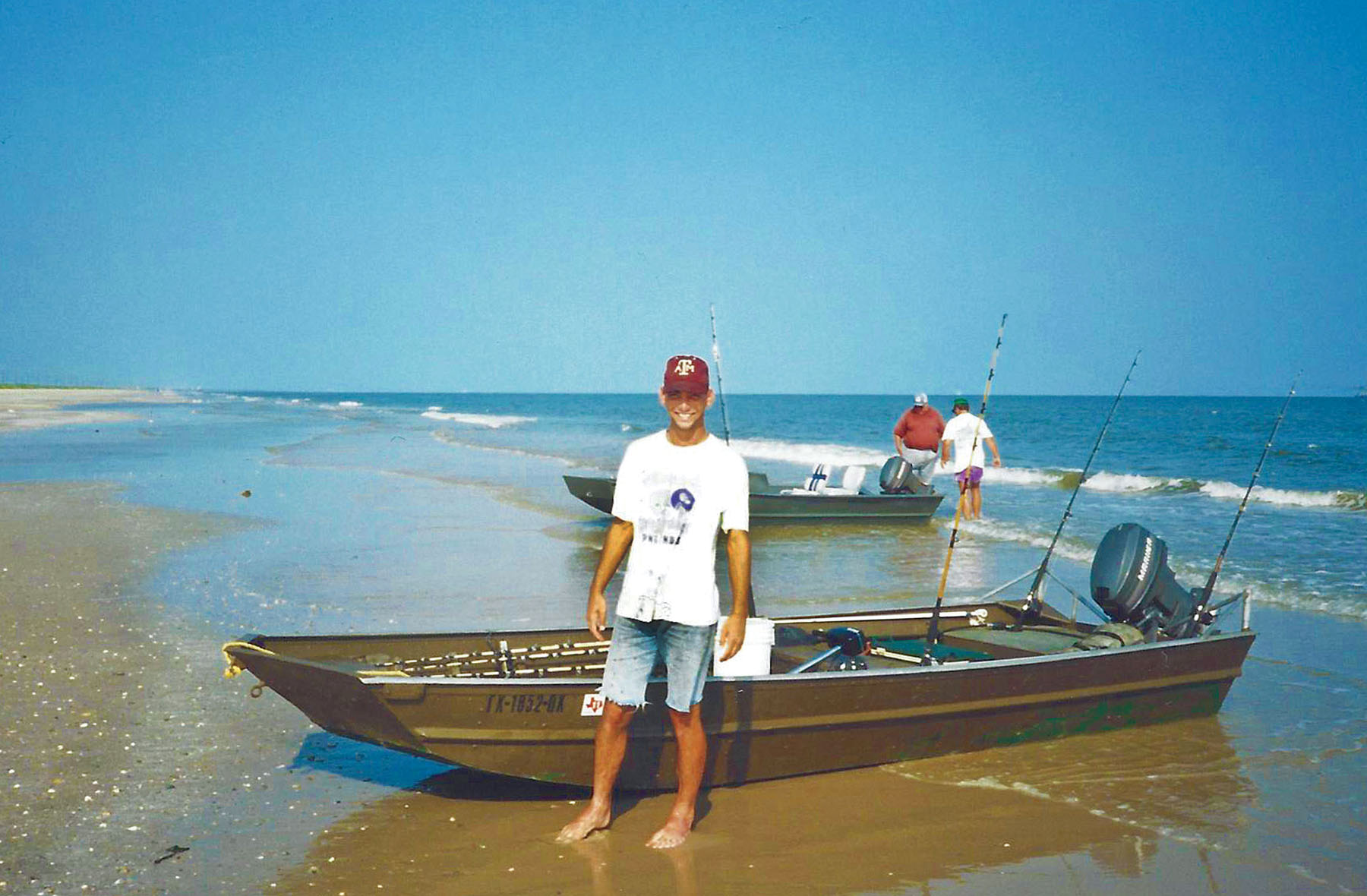 Two johnboats ready to launch at low tide. Light enough to manhandle into the water. Judging by the clothes, this is a dated photo. Best wear more protective clothing, since these boats carry no shade.
Texas is blessed with a fairly even spread of jettied passes, that allow us to launch in sheltered waters and then prowl around offshore. But there are gaps in the coverage, fairly long stretches without a ramp. And the only way to fish them, at least in small boats, is by launching in the surf. Now, the thought of backing a boat into the surf at the beach is enough to make most coastal anglers break out in a cold sweat. Most have never considered it, because they know burying a tow vehicle in quicksand and saltwater isn't much fun. And it can take years off your vehicle, like maybe ten.

I suppose we did it years ago because we started out in such small boats, and they could be wrestled onto trailers. We yearned to explore new horizons, and did. And the beach was quite an experience.

It's a pleasure not launching at crowded boat ramps, and banging your way down a ship channel several miles to the Gulf. Instead, at the beach, you can go barefoot while launching, taking your time, and usually without another boat in sight. Point that boat offshore, and right away you can start looking for action. Tarpon rolling or jacks working 400 yards out? Darn, that 25-horse motor barely warmed up. Still has a full tank of gas, too.

You want calm weather, of course. Typically during summer you get a calm morning, or a breeze blowing off the land into the Gulf, which flattens the surf. By noon, it usually switches around to an offshore breeze, which kayakers certainly appreciate. When that happens, you can ride the waves right back onto the sand after a day of fishing. Just don't monkey around in the surf when returning, keep going until the boat is on hard sand. There are also entire days out there that remain flat calm. July through September are best, however the best surf fishing trips I've ever seen were all in October, running up and down the beach and stopping here and there to fish close to the sand. It all goes back to the versatility of aluminum boats. They're very keen on that in neighboring Louisiana.

Think light, when launching in the surf. Aluminum boats are best. Forget about launching heavy fiberglass on flat sand. They do that sort of thing in countries where there are no protected inlets, where they have no choice. Boats launched in South Africa may spin 180 degrees on the trailer, launching bow-first into the surf with the crew already on board. Its launch, crank it and hit the throttle. Returning, they simply race the boat up on dry sand. Which is a good idea, with high surf right behind you.

Don't go lite with tackle out there, off the beach. If you're tossing artificials around a state water platform, or looking for tripletail, baitcasting reels with 20-pound line have really done the job over the years. But for open-water fish such as tarpon, jacks, bull reds and sharks, leave Mickey Mouse gear at home. Spencer carries five or six Shimano TLD-15 reels with stand-up rods, and they really get some workouts. An electric motor can be handy out there, too. As a reminder, always remember to refrain from charging into a rolling school of tarpon offshore, like they're a school trout under birds back in the bay. Jackfish might not care, but tarpon are sensitive. Outboard noise can put a thousand tarpon down for the rest of the day. And especially don't harass offshore tarpon with bay tackle. To my knowledge, no big tarpon has ever been landed off the Texas coast on trout tackle. These fish when hooked simply go deep, and that's if the hook actually stays in them. Of course, miracles do happen. Maybe a tarpon will jump and break his own neck, and just lay there.

Obvious Texas beaches to launch from would be along the upper coast, from the Brazos River almost to Sabine. The extensive barrier islands along much of the remaining coast would prevent towing a boat down the beach. Short stretches south of Port Aransas to Padre Island National Park will work. Also the 40-mile stretch south of Mansfield Pass, and then the short stretch from South Padre jetties to the Rio Grande. Padre Island National Park is off-limits to powered boat launchings, but the kayak crowd can launch there and has certainly made all sorts of fine catches within sight of the beach. Even big kings and limits of red snapper. If they can be accessed by kayak, imagine what a fast aluminum boat can do off the Texas coast. If weather threatens, you can race back to the beach in about 10 minutes.

Mike Spencer is one of Port Arthur's veteran fisherman who still launches in the surf. We both graduated PA high school way back in '71. Though I've been remiss in recent years, Mike still launches on the beach and makes big catches. (One day, 29 jacks if I remember correctly, which sounds painful).

Mike advises coating the boat's trailer bunks with Teflon instead of carpet, to make it easier to launch and retrieve the boat. A break-down trailer helps, of course. And some young muscle.

"I tell my friends, don't even think about backing your truck in the water like a boat ramp, because it will sink," says Spencer. "If you want to pull your boat ashore without manual labor, buy a length of stout rope, maybe an inch thick, and use that to tow your boat up on the beach, high and dry. You really don't want to be cranking that boat on the trailer with waves splashing over the stern; adding more weight every few seconds. Once on dry ground, take your time cranking it on the trailer. Heck, you can eat lunch first. Be sure you have a strong belt on the trailer winch, not a ski rope."

Mike says anglers keep using bigger and heavier boats, even heavier gauge aluminum, and this just makes it more difficult to launch on a flat beach. His 16-foot aluminum jon boat is a tarpon, bull redfish and big jack veteran. Along with countless blacktip sharks in the 40- to 80-pound range. He takes two of his daughters out there, and they battle fish all day.

For checking out the Gulf far from any boat ramp, it's a lot smoother ride in a pickup truck cruising along a coastal beach with the AC going. Better gas mileage by a long shot, and you can launch within sight of action if you're patient and use binoculars. Writer Ray Sasser got away with it for many years out of Port Arthur, where he kept a small Boston Whaler and launched quite often at the beach.

One evening back at Sabine Pass he was shocked at the Sportsman's gas station, to see our catch. We'd been surf-launching my 15-foot Thunderbird, really a ski boat from Toledo Bend, a boat that saw many trips further offshore. Both our boats had been a little ways off the beach that day, but 20 miles apart. The Thunderbird held at least a hundred pounds of solid trout (no limits then) and Ray for once didn't have much to show. We wouldn't tell him where we'd fished, but it was at state water platforms visible from the beach. By a twist of fate we had the right water that day. A line of clear, green water makes all the difference when you're throwing artificials. The sick thing was, it was our second trip in ten hours; the morning catch was identical. Four-pound mackerel were scattered through each catch. You could say we had ice cream conditions that day. Heck, a MirrOlure wasn't safe out there. This happened on a Labor Day weekend and we never saw another boat. It was one of those days you can repeat, if you ever get to Heaven. Or just launch in the surf again, and hope for something similar.

During some of those summer surf trips, the tripletail tore us up. One afternoon I was yanked overboard, after sticking a good one next to a standpipe. While jumping from the bow and middle seat to the stern (we were tied to the rig), the fish made a hard run out to the side and next moment I hit the water face-first. Underwater with a bent rod, the red reel still giving up drag. Finally realized I was losing the battle, so I free-spooled, swam up to the boat, handed the rod off to my buddy and climbed back in. We actually landed that fish, one of six hefty tripletail and a dozen solid trout. It was a triumphant, soggy ride back to the beach in short, evening wave chops. I jammed that boat right up on the beach, and then it was Miller time.

This is a very efficient means of fishing several miles offshore, in a small, cheap boat. Watch for green water, make a good launch, and enjoy the freedom of uncrowded water. And watch for action on the surface. If you bring your own frozen shad (menhaden) as bait, be prepared to get your boat towed around.