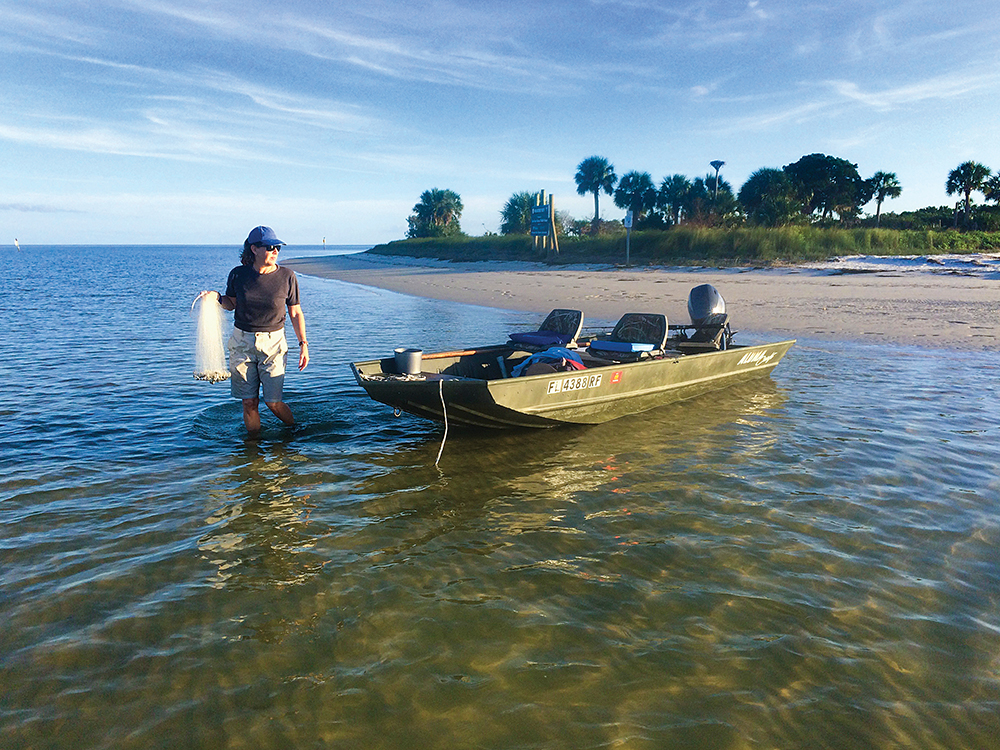 Show me the mullet! Without a castnet, multi-rod shallow water anglers must use store-bought shrimp or croakers for bait.

Sometimes when fishing, it’s better to Just. Sit. Still. Stop running around and burning gas and instead, focus on two or three specific shoreline spots. The slow pace is almost like kayak fishing, but far more comfortable with more options of tackle and bait.

It’s true that bait fishing is anathema to many coastal fisherman, but on the upper Texas coast, water clarity is seldom clear. Why not anchor up and set out a few rods to find out what’s really down there? This technique can be used on Galveston Bay, also Jefferson and Orange counties to the east. And Louisiana, too.

On our murky upper coast, there’s no point in burning shorelines looking for fish, unless you like discovering oyster reefs, mud and sandbars with that lower unit. It’s much more practical to ease in quietly, coasting the last 30 feet, stake out a shoreline point or creek, set out five or six rods, then sit back and relax. It’s what we call “using the old ways,” because that’s what most red and flounder fishermen in Port Arthur did years ago, back when boats and motors were quite small by today’s standards. Those guys learned where the best spots were by sitting still, putting in the time and observing, learning the good spots, making note of wind, season and tidal flow.

My high school classmate Bob Bellows in Port Arthur has caught up to 67 slot redfish in one spot, just by sitting still. When he ran out of bait, it was time to go. The technique is quite the opposite of redfish tournament boats that run and gun all day, throwing artificials. Interestingly, though I moved far from the old neighborhood, I started using the old Port Arthur strategy about 10 years ago. With five rod holders on the starboard side, I usually anchor the port side against a shoreline sheltered from the wind, where we sit very quietly. Bob and I both anchor in waist-deep or shallower water. We both use lots of rod holders. I’ve installed five anchor cleats around the boat to accommodate any wind direction. Sometimes, a light wind may be lapping straight onto a favorite shoreline, but I can anchor on the starboard side to small waves, and cast into the wind. Other times I anchor by the stern, so that people up front can fish off the open bow.

Bob and his long time fishing companion, daughter Amy Bellows Calaway, have racked up some impressive catches—limits of flounder and slot reds, mostly. They fish the marsh country in Jefferson and Orange Counties and know it well. Friends say Bob will run right past a flock of diving seagulls on the bay, just to catch finger mullet with his castnet and get anchored up on one of his favorite shorelines. He’ll set out six rods and wait for the action to start. Sometimes six rods is way too many, other times it takes that many to grab a limit of redfish. He favors Kahle hooks because they work well with small finger mullet. A small circle hook hasn’t worked that well.

“I use 14-pound Cajun line on 7 foot medium action rods,” says Bob. “Carolina rig with 12-24 inch leader, half-ounce weight, 2/0 Kahle hooks with tail-hooked 3-6 inch mullet, which makes them swim up from the bottom. I also use Cajun Thunder corks with 18 inches of leader, due to grass. I fish 3-6 rods, depending on the area and have lots of rod holders, you can never have too many. I use two anchors, so the boat doesn’t pivot and mess up the line set. Croaker Saver and frozen Gatorade bottles in the live well, to keep the baitfish happy in hot weather. Using shrimp just invites trash fish. Alligator gar are still plentiful and will really try your patience.”

Sitting near murky shorelines, neither of us get many problems from other boats that will burn shorelines in clear water. If you want peace and quiet, avoiding Saturday redfish tournaments is a good idea. Some will ease in too close, but boats with 400 horsepower always seem in a hurry to be somewhere else. If they get a hot tip about a fishy spot 50 miles away, off they go. (Can you imagine a redfish tournament with johnboats only, and a limit of 25 horsepower? It’s easy, when you’ve had aluminum boats for 52 years.)

Sometimes I’ve sat still and caught 20 redfish and big trout without moving, while boats prowled by on electric motor, casting here and there, and I never see them catch anything. For years, I’ve coached anglers on my boat to look dejected with slumped shoulders, sipping water, looking bored, munching a sandwich until a nearby boat leaves. Shouting, waving a landing net and doing high-fives is no way to guard a fishing spot. (The opposite of guys making YouTube videos or Saturday TV fishing shows, who have to use theatrics).

If another boat is lurking nearby, we look bored, keep the rod tip down on hooked fish, and then land them on the backside of the boat. (You’ll notice the old-timers on the bay are good at that). A hooked fish can just wait out there until a passing boat is gone. We’ve also fought five-foot jumping sharks, big gar, catfish and big stingrays that can spoil the party, once they get the scent of dead bait. That’s why we use up our live bait, first. Shockingly, we’ve caught trout up to 27 inches while parked on a shoreline. That may sound bogus and sad to the guys who only use artificials, but some of my clients can’t cast all day, and need a break. Some of the elderly or very young can barely cast, but they can wrench a bent rod out of the holder and reel in fish. Our biggest trout using this technique was caught by an 80-year old woman who couldn’t cast at all. She wanted to keep that sow trout pushing eight pounds, but I told her no way—the three of us already had 11 trout in the box from drift-fishing that morning. At noon we’d parked the boat and rested on a high tide shoreline, waiting for our redfish.

When one of my 7-foot spin rods with 12-pound line doubles up and stays that way, it’s a sure sign the black, 6/0 circle hook has worked. Most days we don’t even bother with a landing net unless action is slow. Just work the fish in close, grab the 30-pound leader and the fish’s tail and lift it aboard. A fish released probably can do without first getting wrapped in abrasive mesh. (Mine is a short fold-out Frabill net, easily hidden from prying eyes).

When first mate Amy Richard is aboard, she’ll stand on the bow and sling gold spoons out of habit, until satisfied the fish won’t take hardware, and then she’ll settle down and wait for our five bait rods to work. Some days her spoon works and others days it’s up to our pinfish and mullet.

Firing off a broadside of 5-6 rods covers a decent area, and when one rod keeps catching fish, more rods are aimed in that direction, even if I have to pivot the anchored boat. Fishing in Florida last spring, a friend followed me in his almost-new, high-dollar shallow water boat that had no rod holders, just the center console rack. He had no mullet, only live shrimp. (No live croakers there).

Refusing to mar his shiny boat with rod holders; he and his son struggled that day, fishing only three rods, and two of them had to be constantly held. They scratched out two reds while anchored only 10 yards away, while we caught four legal reds and a six-pound trout. Fortunately, he did reel in one of my spin outfits that was torn right out of a rod holder 30 minutes before. That 25-inch redfish was still on the circle hook, too.