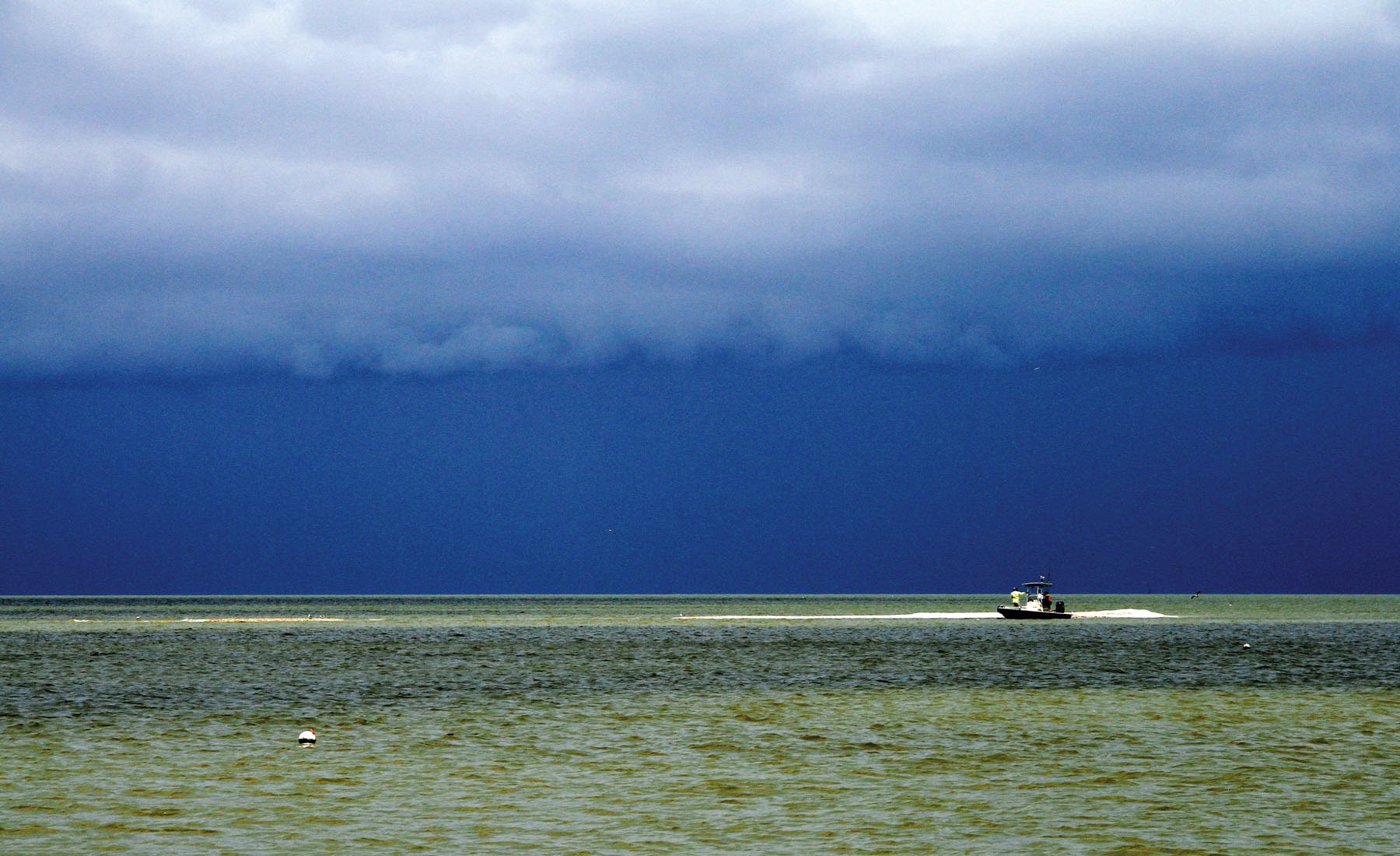 Ever been startled by a nearby lightning strike? It's inevitable if you spend much time fishing in Texas, which ranks in the top-ten states for lightning-related injuries and deaths. A few good stories should be enough to make anyone cut and run when the bolts start flickering and thunder booms. Not even a 30-inch, STAR tournament-winning trout is worth a lightning hit.

About 20 million lightning strikes hit the U.S. every year, according to the Weather Channel, and the trick is to get out of their way. If you fish or boat in the wrong spot, even dally a minute or moment too long on the water (or even by the truck), you could be nailed infinitely worse than a jolt from a Taser-happy cop. I've had close calls even when the boat was halfway on the trailer, lightning hitting all around like so much artillerybefore I finished cranking on the winch, and dove into the truck.

Out on the water, a boat owner is responsible for the safety of his crew. If there is roofed cover nearby and the lightning is bad enough, I don't care who owns the property, I'm taking shelter inside or underneath. Nice if some of those bay cabins could just have their doors left unlocked for emergency shelters, but I'm sure owners have mixed opinions on that. Nevertheless, anything is better than getting struck by a million volts or so. An old, abandoned plywood shack on the bay can be a lifesaver. If you're in a hurry, pick an older one, and hope the door swings open. And hope that structure is well-grounded.
About 90 percent of all lightning-related injuries in this country occur between June and August, so perhaps a few personal stories from the Texas coast might be in order as summer begins.

Last June, an intense storm hit the middle Texas coast. A couple of boats returned from offshore after ignoring a terrible weather forecast, and the crews looked like drowned rats. Their experience was so bad, one guy had literally crapped his pants. His buddy knelt and kissed the dock. And then had to be restrained from slugging the captain. Another boat pulled in to watch the altercationtheir crew had sat out the storm high and dry, inside or underneath a bay cabin, when their captain judged the storm left no time for them to reach the marina.

"A few years ago we joined the weekend warriors at Galveston's north jetty, with an anchored boat about every 50 feet for as far as you could see," says Jim from Houston. "We were about 500 yards down past the safety cut. Catching fish and hollering back and forth, joking with three black dudes in the next boat. Calm weather, fish biting, it couldn't be better. Out of nowhere came this giant clap of thunder and bolt of lightning. I looked up and a pelican was spiraling down between our two boats. Glanced over at the other boat and couldn't see anybody. We cut our anchor line and rushed over to check on them. The guy who had been standing up and fishing on the bow, he was down. Lightning bolt had hit him in the left shoulder and exited his right thigh...He wasn't plumb dead but awfully close to it. His two buddies who had been casting from the back of the boat were now sitting on the floor, stunned."

"We radioed Coast Guard Galveston and they asked us to bring them in ourselves, it would cut rescue time in half. We put uncle George on the other boat and for some reason their motor fired right up. It was wide open throttles into Galveston and they had two ambulances, a half dozen nurses and docs from John Sealy waiting for us. The guy in the bow didn't make it; he had a big bleeding hole in his shoulder and another one in his thigh. His two buddies recovered. It really made me a paranoid old man about going out if there was even a hint of bad weather. I ain't that mad at the fish."

From Shannon Tompkins: "The closest I've ever come to getting hit was during regular duck season in a Chambers county marsh. A storm front rolled in and lightening was blasting all around us. We lay our shotguns on cordgrass and scrambled away from them, taking refuge on the side of muskrat mounds, while beseeching The Great Cosmic Power to spare our worthless lives. We watched a bolt hit a windmill a quarter-mile away. Could smell the ozone or burnt air. It was bad. I don't jack with lightning; I react the same way a quail does when a hawk sails overhead. I hide like my life depends on it. Because it just might."

My own close calls include lightning striking a Gulf platform my boat was tied to, the bolt traveling down the corner pipe 75 feet away and then into the water. If we'd tied the boat to that pipe and fished close, lightning would have traveled through my center console with five of us aboard. It was so loud and blinding, we all thought we were dead for a little while, but then we looked around didn't have a scratch. If we'd been scuba diving there, which I often did, I wonder what that would have been like. We've always assumed Gulf platforms are grounded from lightning, so we tied up underneath, rather than running the open Gulf. But there are no guarantees with lightning and we decided to bolt, so to speak. The sky was dark all around, but a tiny piece of bright horizon beckoned from Pass Cavallo, and we lit out like a horse for the barn.

Another trip, after walking out to the end of Aransas' north jetty, the sky darkened and then our lines wouldn't go in the water after casting. Whoops, a bad sign there, static electricity? Lightning was striking now and then offshore two miles, but black clouds were creeping closer. We had to fast-foot it down the entire wet jetty, trying not to fall through the cracks, holding rods and stringers of fish. Feeling like we might be here one moment, and gone the next. I suppose we could have crawled into gaps in the granite and cringed like jetty rats when the storm arrived. But the passenger ferry was waiting, and we escaped. A long rock jetty is a poor place with no cover when a storm hits. If you see someone on the rocks at Galveston's north jetty safety cut, about two miles from land, and lightning threatens, consider giving them a fast boat ride back to Bolivar.

We like to think there's time to judge a storm, but you don't want to waste even a few minutes. On the Sabine jetty where we spent what seemed like a thousand afternoons, if a rare thunderstorm approached from the northwest, cutting us off from Sabine Pass and the boat ramp, we sometimes ran the boat two miles SE into the Gulf, and climbed a handy oil rig, sitting upstairs in the warm diesel engine shed while a cold rain fell and thunder boomed. Our jonboat was fine, tied off below.

Boats with a v-birth or walk-around cabin are rare as hen's teeth these days, because everyone has a center console, but it sure is nice to get inside the cabin when lightning threatens, and slam the door behind you. After an overnight campout on Matagorda Island, we once hauled the neighbor's kids, five or six tucked in our v-birth cabin, back to Port O'Connor, while their parents made exciting runs in more exposed boats. At least the kids were pretty safe.

It's a wonder any of us are still here, after so many coastal trips. I've seen lighting flicker down from blue sky and hit the Gulf not far from us, easily 2-3 miles from the nearest cloud. Weird, and hard to see, a thin white flicker on light blue sky, but loud as heck when the thunder hit. And alarming, when you're anchored offshore. NOAA says lightning can strike up to 10 miles from the nearest cloud. One moment you're having a good time, and the next
There is some good news on lightning-related injuries. Last year saw a record low number of people killed in the U.S. by lightning, according to NOAA. There were 23 U.S. fatalities, but sadly the majority were fishermen. Public awareness has been attributed to this record low number of fatalities, or maybe it was luck. You never know, with lightning. Hats off to the fishing guides, who probably all have their tales of narrow escape.

Keep in mind that smart phones with weather apps are now readily available, easily carried in the boat, and should go a long way towards avoiding lightning this summer. If you need any more evidence of lightning striking near a boat, check out this video from Lake Athens at: http://goo.gl/gxDMLE
It's good that 90 percent of those struck by lightning survive, but there are often lifelong medical issues for survivors, many of them debilitating, including chronic pain. There are also memory and cognition problems, and it could mean going on disability. And no stringer of sow trout is worth all that.