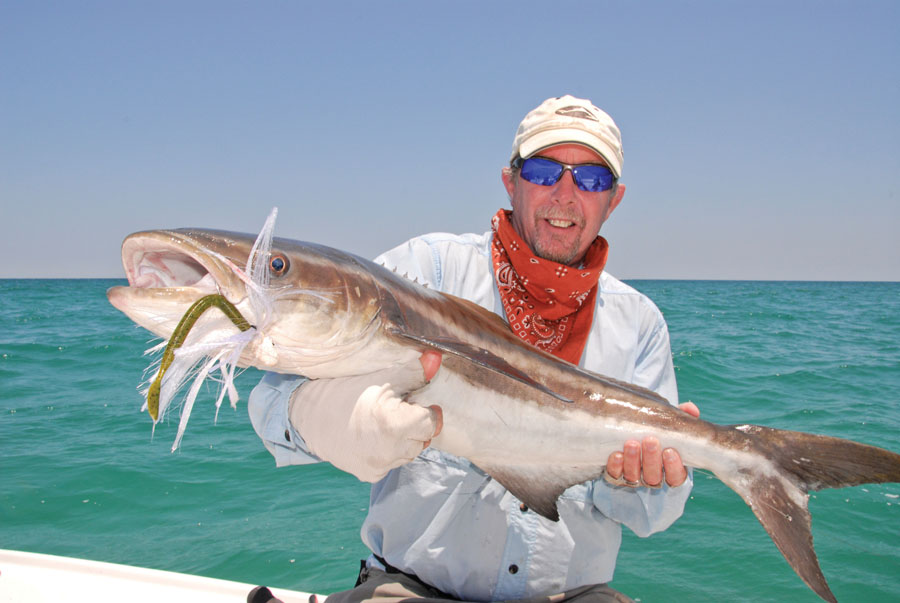 Author with a legal-sized ling.
Long-time Gulf anglers have heard the word Ling! screamed more than a few times over the years, when these fish boldly appeared on the surface, cruising around to inspect the boat. What often follows is a mad scramble to get a hook in front of the fish, before it loses interest and vanishes. Today that might only take a few seconds. Or it might last for an hour, which was more common 30 years ago. Regardless, April is always the first month we hope to hear that magic word.

The chance of this happening during April and May are greater than any other time of year, because these fish likely haven't seen a boat since last year. They're hungry, as well. Why? The summer shrimpboat fleet isn't on the horizon yet, dumping tons of bycatch overboard. Ling can always find something to eat in the Gulf, but for reasons unexplained, they always seem hungrier in late spring. In addition, there aren't that many fishable days. For weeks on end, it might stay windier out there than a 50-pound bag of whistling lips.

Early-season anglers also have a better hookup rate, because these fish aren't so hook-shy. But where they've been during winter is a mystery. They're fond of warm or almost hot water, at least 70 degrees and higher. Some might linger way off the Texas coast during winter, but I've never heard of it. Those that I tagged were often recaptured in winter, but down in Mexico. Way south in Vera Cruz or beyond, though not beyond the Yucatan peninsula in the Caribbean.

April is our time for ling here, and May is even better. We were blessed to fish prime ling water off Port Arthur for many years, and we had a bonus, there wasn't much fishing pressure. We saw ling out there that would make veteran anglers today shiver like a hound dog passing peach pits. Ling were so common, we expected to see them every trip between April and September. Compare that with Port O'Connor, where in later years (the '90s) I'd fish sometimes an entire summer offshore without seeing one. It should be noted that some years are better for ling, than others. Obviously, Louisiana waters carry more ling and Port Arthur is right there on the border. For us, it's easy to steer a few degrees east on the compass, and fish in Louisiana waters.

As a rookie I can remember the local hero, outdoor writer Ed Holder, returning with 16 big ling on a single day, and this was in April. A year or two later in early May, we saw schools of 50 big ling on the surface at some small platforms not far beyond state waters. They created a brown patch on a blue-green Gulf. These were all 30- to 60-pounders, no little ones, but no giants. But they were hungry, and it was hard work fighting them for hours.

The biggest ling we spotted out there was a little over six feet long with shocking girth, and we had no inclination to try and hook it. It easily topped 100 pounds and might have gone 120. We were sitting on a platform on a calm day and it passed by with five other ling, and I reeled in my line and thought: No way, dude. You see, it's very difficult to land a ling from a platform. You might land a 30-pounder with a snapper broomstick rod, which we did. Sometimes with the aid of a .22 rifle, to shorten the fight. The little rifle was mostly employed so these fish wouldn't wreck the small boats we fished from in those days. Boats today are so big, you can let a ling flop around on deck until he gets tired, or drag him into a box under the deck, and let him settle down in there before the hook is removed.

Best weather: Just like us, ling have no desire to take a beating on the surface during a rough day and so they generally stay deeper on choppy days. If you're out there on a fairly rough day, chances are you won't see a ling bouncing around on the surface, because they're cruising at mid-depth. They will follow or chase an artificial or hooked bottom fish to the surface on choppy days. Toss out a two-ounce jig and let it settle deep before retrieving it, to cover the water column. We've also caught ling smack on the bottom while fishing for snapper.

Stay Versatile: This is a versatile fish, found from the grassflats in Florida out to 200 feet of water off Texas, or deeper. They run the surf in Florida, sometimes in schools, and have been caught by the hundreds from pier anglers there. In Texas they're caught offshore around shrimpboats, weedlines, buoys and platforms. Locate shade offshore, and wear polarized sunglasses while searching for these fish.

Best Baits: Ling will eat almost anything they can wrap their lips around. But some days they can be very picky. One enterprising guy on a partyboat coaxed a 60-pounder into biting, by hiding a sharp hook inside a hardboiled egg he'd brought for lunch. Just 40-pound line and a hook with no leader. Try that with any other offshore fish. Another guy tossed out a dead sand trout with an Alka-Seltzer in its mouth. It fizzed away and the ling couldn't stand it, gulping down the trout.

More conventional ling baits include live hardhead catfish with spines removed, or almost any small fish for that matter. (If you need quick catfish, try under a marina's bait cleaning table). Almost anything found in shrimp boat cull, or caught with a castnet. And then any frozen bait from marinas. The trick is to carry a variety of bait, and present it when a ling passes by. And preferably without backlashing the reel. It can turn ugly fast, when a big ling grabs the bait and runs up against a jammed reel. If you're using 100-pound line and the deck is wet, somebody better hold on to your belt.

Keep in mind if you're fishing a tournament for ling, and they're strict about state rules, you might be using an illegal bait. That would mean not using snapper, amberjack and various reef fish for bait. Check your bait's status before using it offshore in tournaments. What if you catch a winning fish, and wind up in a polygraph test?

Tackle: Almost any tackle will catch a cobia, but with lighter gear, you'd better hook one of these fish in open water. Why? They're the devil to turn around if structure is close by. A hooked ling will charge right through a Gulf platform, running out the other side, so it's difficult to stop a big one from cutting the line. They don't always do this; some will cruise away, shaking their head, and an occasional ling will jump as it runs, which is rare treat to see.

Ling are fond of buoys, and this is an easier venue for landing one on different types of tackle. They might run around the anchor chain, but quick handling with the boat can unravel the problem. My biggest ling ever, weighing 80 pounds at the marina, still had the tips of his tail touching the ground. It was caught at a buoy, and wasn't interested in the buoy's chain. With a bent rod in one hand, I had to run to the bow and untie from the buoy, start the motor and back away quickly into open water. The reason for these added chores is because my buddy wouldn't help at all, he was busy casting at more ling. Three times, he jerked the hook away from 40-pounders, and he just didn't have the time to help. However, 10 minutes later on the ling's first close pass, he leaned out and made a good gaff shot under the ling's pectoral fin, evidently hitting it in the heart, and the huge fish just gave up. When it could have jerked him overboard.

Conservation: Ling are not as numerous as they were 40 years ago. But they persevere under today's fishing pressure.

The minimum size allowed is 33 inches at the fork of the tail, and some folks are mighty tempted to fudge on that, hoping they won't get checked back at the dock. I've never weighed a 33-inch ling for some reason, but it can't be much more than ten or 12 pounds. This is a fast-growing fish; a two-year-old female at 10 pounds will weigh 24 pounds by the following year. Males double from eight pounds to 16. So consider releasing those marginally legal fish.

And be careful when handling undersize ling; they'll thrash all over the deck and injure themselves. They can be wrapped in a wet towel and quickly unhooked, and shook out overboard. Releasing small ling will hopefully educate them before grabbing another baited hook. Maybe they'll grow up to 60 pounds or so, spawning a few times, before they really make some angler's day. We need all the ling we can get out there in the Gulf.

Those curious about catching more ling might check out my older book The Cobia Bible, found online at Seafavorites.com.