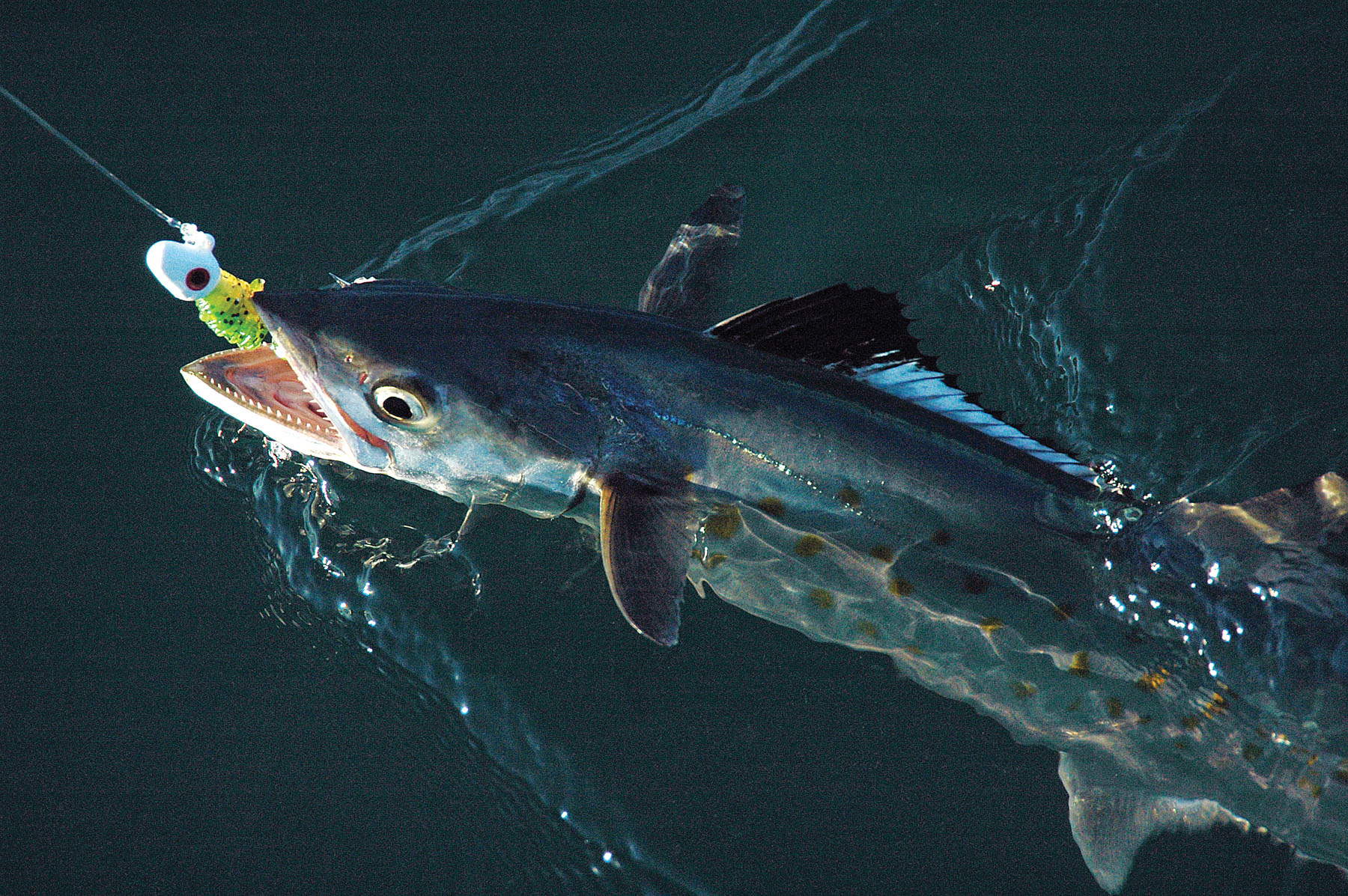 During fast action with mackerel, plastic grub worms are shredded, but its better than losing expensive trout plugs.

A Spanish mackerel blitz is something many dedicated coastal anglers have yet to encounter, so focused are they on their favorite two fish. It's quite the opposite of wading some quiet, sheltered flat for redfish and trout. Yet an hour of true mackerel frenzy can yield more action, more pulled drag and lost tackle than weeks of bay fishing. Slow weeks, but you get the picture.

I am not entirely a stranger to mackerel schools – over the years my fishing mates have always relished a fight with these toothy speedsters. Fast action and a full fish box, that was our goal. A spattered boat and a dozen lost lures was just part of the program.

There have been memorable days spent with this Gulf-wandering fish. A major benchmark came and went this June, when we loaded up the landing net (and then some) with my biggest mackerel ever. Oddly, it attacked a floating topwater called a Chug Bug – slashing it repeatedly, even jumping over the lure like a small kingfish. When I reared back into him, my first reaction was chop back on the drag. The big fish plowed by the boat and the young angler with me reached hopefully toward it with his small landing net, but I cautioned him to hold up; this mackerel had yet to crank up the afterburner. Right on cue the reel sang and that mackerel bolted 35 yards. Somehow the 12-pound line and 20-pound mono leader held on. The fish wouldn't quite fit in our landing net and one of the treble hooks broke off in the struggle. But it was dragged aboard and later, back at the marina, weighed six pounds even in front of a half-dozen gawkers. We carefully bagged those thick, yellow-spotted fillets and hours later they graced the table for a party of four, served with a magnum of chilled white wine to ease the days pain.

That fine mackerel was caught over a Florida grass flat, but Texas has even bigger mackerel, with the state record of 8.7 pounds caught at Sabine Pass in my old stomping grounds, probably at the jetties. Texas mackerel follow summers green tides in the surf, but also in the back bays when salinity permits – even San Antonio Bay on occasion. With the ongoing droughts, we may see more mackerel back there in the future. After all, the mackerel population is doing quite well.

Port O'Connor friends visiting Florida last November were amazed to see mackerel milling under the boat in six feet of clear water, where we'd staked out an autumn migratory spot with a chum lock, creating the action. It was the days highlight, with 17 fine mackerel hitting the deck. Another dozen lures were lost, with our motley collection of gold spoons taking a serious hit. Something grabbed my spoon and streaked almost 40 yards in a few seconds, breaking the line, leaving only speculation. Very likely it was another mega-mackerel.

We'd intercepted a fall mackerel migration heading south on matters of importance; it seems all eastern Gulf mackerel winter way south in Florida Bay (between the Everglades and the Keys). That's where they stack up by the millions in about 10 feet of water, a handy fact for Texans needing respite from the winter doldrums. In the Western Gulf including Texas, mackerel winter in sunny Mexico, which doesn't sound like a bad idea except for the gillnets. One of my tagged mackerel in Port Isabel, released one October, was recaptured that winter off the Yucatan Peninsulas north coast. In a net, of course.

More notes from observing mackerel schools: Like most fish, there are days they just hit right with solid hookups. Other days they play the devil with tackle, eating swivels and chomping through 40-pound mono leader like it was nothing. Unlike trout, mackerel don't seem to mind thin but dark wire leader---at least we've caught them by the box load while doing so. If mackerel are leader- or lure-shy, you can at least see them following the lure and make adjustments. If they're in a feeding frenzy, chopping up anchovies, then pull out the dregs from your tackle box – rusty jigheads, and adorn them with plastic tails that somehow never catch fish in the bays. And by all means hide those killer trout baits from your boat crew. Why? During a mackerel melee, people are liable to tie on any lure within reach. Those are days when your favorite Corky plug wont live 10 seconds out there.

Feeding mackerel schools are a harsh environment. That 12-pound line used for trophy trout is fragile as a spider web, surrounded by eager sharp-tooth mackerel. One can stay sporty in a Blitz with 12 and suffer real losses, or get mean and fill the box with fish. That's when a hard 20-pound line like Ande works for us. A foot of light brown piano wire and a tiny black swivel will certainly work here. However, this autumn I'll be using 40-pound Malin Sevenstrand, a flexible cable that actually ties into a knot. Connect the cable straight to 20-pound line on the reel with a blood knot. Presto, no swivel for mackerel to munch on. It's labor-intensive to build a replacement after a mackerel swimming with mouth agape runs into your line 20 feet from the lure, cutting off the entire rig for no reason. Best to keep a dozen pre-made short wires or cables in the tackle box. In any event, you want light steel leader when the action starts. Heavy kingfish wire of 69 to 90 pounds is way too heavy, though it will likely catch a few Spanish during a feeding frenzy.

Mackerel have keen eyesight and prefer clean water; the best is olive-green water during summer. Speed is the key: A pluggers slow retrieve may only attract follows, critical stares and maybe a few bumps. Speed and flash are required for solid hookups; call it crank-and-yank. That's why you want a fast-retrieve reel for this kind of work, and a seven-foot rod with a broad sweep. A short rod and slow reel makes it hard on the angler. Except on rare days when these fish are groping in murky water for schools of baitfish. One Labor Day we returned from offshore with few fish, to find glass minnows spraying at the end of the jetty in chocolate water during tide low. By creeping our gold spoons near the surface, Amy and I slammed those three-pound mackerel for two hours, the boat spattered with blood and coughed-up mangled minnows. At the time there was no bag limit on these fish. Once again, our gold spoon reigned supreme over these fish.

Mackerel schools appear and vanish on a daily basis, but the most dependable action happens during years when massive schools of dusky anchovies appear in their countless millions, turning the water a patchy pink. They're most commonly spotted off the beach or around the jetties, hanging out sometimes for weeks, almost a guarantee of another mackerel blitz. During such times, macks will even follow anchovies into the bay, where it's a treat to plug away in sheltered waters, compared to the open Gulf. One year schools of mackerel camped in front of Port O'Connor's Saluria Bayou, thousands of fish that wore us out. We'd plug away until noon, wash up for a leisurely lunch at Clarks Restaurant only two miles away, then jump back in the boat for more. Oh, we had some fun with those mackerel.

Because mackerel populations today are considered healthy, and often not targeted by the public, the daily bag limit in Texas remains at fifteen. That's a lot of fish, if you can find a ravenous school of 3-pounders. Just be sure each fish swung into the boat has a shiny black dorsal fin. If its green, that's a juvenile kingfish and the bag limit is exactly two. Both species hang out together when their size difference isn't great. You wouldn't want to unload fifteen little kingfish back at the dock, because a sharp-eyed game warden can tell the difference. (Legal reasons aside, kingfish grow to 90 pounds, so why keep two-pounders).

Mackerel are lumped together with kingfish when it comes to mercury advisories, but I seriously doubt a three-pound mackerel that eats tiny glass minnows most of the time would build up much mercury. The lowest items on the food chain carry the least amount of mercury, and mackerel are especially hard on the little critters. They will however target those five-inch silver mullet migrating out of the bays around Labor Day, milling at the jetties, schooling on the surface, easily blasted from below.

For anglers who disdain or have never tried Spanish mackerel, baked or broiled fillets from a three-pound fish or bigger are a serious treat on the table, infinitely more so than fried seatrout. Mackerel also fillet easier than perhaps all other species, and have no scales. Simply lay the fillets (skin down) on a shallow baking tray, sprinkle Tony Chaceres Original Creole Seasoning with a tad of Italian seasoning on the meat side, pour melted real butter over same, and bake at 350 until the meat just starts to flake. We prefer to broil during the last 3-5 minutes to add a little crisp. On the table, squeeze lemon juice over each slab of white meat. Holy mackerel, what a feast and what a fish.