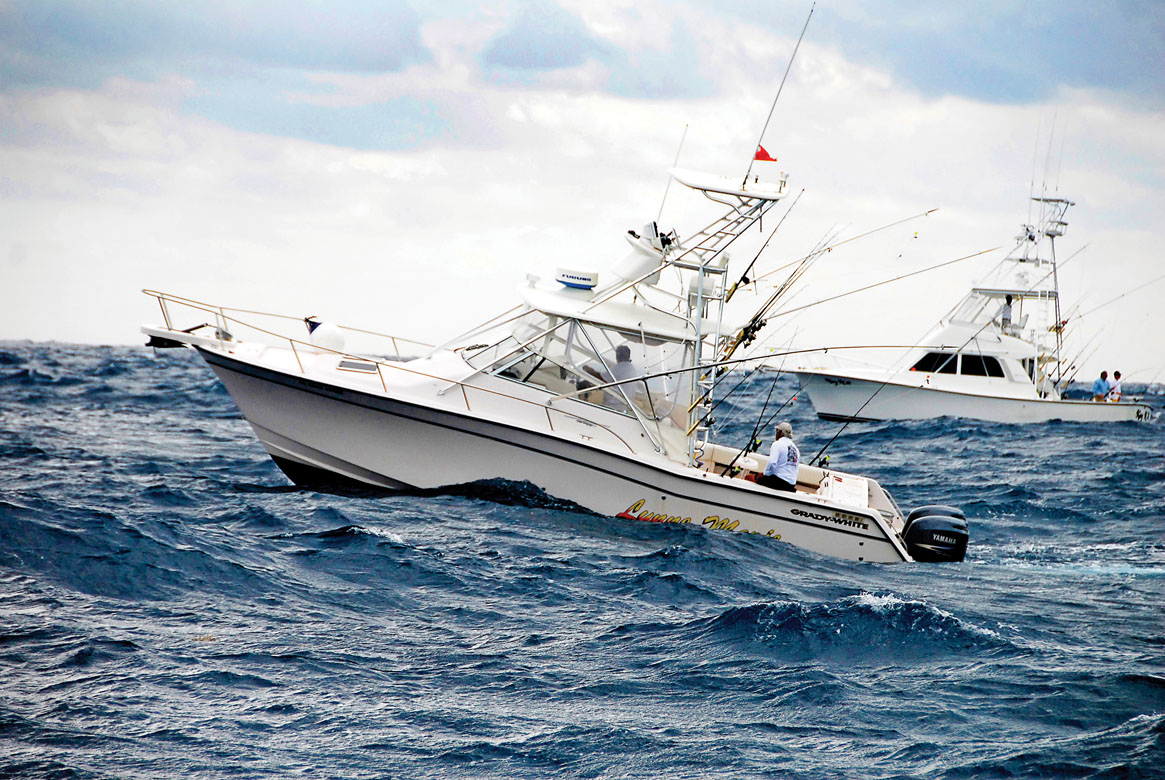 It's hard to find someone who falls overboard in choppy seas.

Many boat anglers never encounter this problem, but what if someone falls overboard? In 48 years of owning boats, I'd never seen this happen until last summer. Sure, we jumped over the side countless times while diving or snorkeling offshore, back in the day. Even swam to the jetties while anchored close by, so we could walk the rocks and throw spoons. Climbing back aboard was never a problem; when you're 20 to 30 years old, you should be able to lever yourself back into a low-sided boat with little effort. We didn't even own a dive ladder; they took up too much room in the small boats we used.

Even 15 years ago, Amy and I clambered back into our high-sided 25-foot Mako after a chilly November scuba dive. Just climbed right up the side of the motor after removing the heavy tank. Back on board and only a minute later, two striped tiger sharks arrived and began circling the boat like seven-foot ling. How cool was that? We gutted a few fish from the cooler and actually fed our well-mannered guests.

Not sure if we could pull off that that stunt today. As the years go by, it plainly gets harder for most of us to climb back into a boat. The majority of us face more pounds and less upper body strength. And at least one bad shoulder.

Anyway this "man overboard" pigeon came home to roost early last summer, when a long-time family friend vanished overboard while we were in rough seas. I never heard her yell; I was at the helm, and four-foot whitecaps were hammering this little 20-foot center console boat from the two o'clock (starboard side) position. My friend, a well-seasoned angler who owned the boat, was sitting on the port side gunnel in the rear, trying to stay dry from blinding spray and some hard hits. I was soaked and half-blinded from buckets of seawater. A wave bigger than the rest curled and broke and the boat went airborne, tilting almost on its left side in the air, it was pretty shocking. Halfway back down, the boat mostly righted itself and we landed with a smack. Then the next wave hit four seconds later, and the next. The single Mercury outboard was extremely loud, and I'd heard no complaints behind me, but after a few moments I twisted my neck left and right as far as it will go these days, but no passenger. So I throttled back down off plane, turned the boat and scanned my wake. There she was, 50 yards astern! Bobbing up and down in whitecaps, no flotation except for a pair of Croc shoes. Wearing a white t-shirt that was hard to see.

I turned the boat around and tried a rescue from just downwind, but the gusts snatched the boat away faster than she could swim. Then I remembered a Coast Guard exam answer from long ago: approach from upwind when making a rescue. Sure enough, the wind blew the boat right to her. I cut the ignition of course, and then it took some serious tugging to drag her over the transom, even though she was aided by standing on the motor's Doel-Fin and a starboard trim tab that wasn't working that day. And she was just able to reach the aluminum leaning post and pull. Fortunately, the transom wasn't too high. But wow. It would make for a more colorful story if I could say she's tough as nails and mean as a snake, which helped keep her calm and afloat out there in 90 feet of water–only 20 minutes after a big hammerhead shark attacked one of our kingfish. However, she's actually the nicest person ever. Pretty tough, though.

With her safely back onboard, both of us looking like drowned rats, we resumed our miserable run for the inlet, another 28 mile beating on a late afternoon. Wet as a car wash and too soaked for a cigarette. I kept spraying bottles of drinking water on my face, to wash away salt from the sunglasses. One of the toughest trips in recent years, though we caught three big kings and some barracuda. It was June and the water was warm, thank goodness. Most modern boats today have higher transoms for safety, plus they offer a built-in dive ladder. Somehow these features were ignored on many boat models years ago.

Which later left me wondering: What if my passenger had been really big, with no upper body strength? How do you drag a 300-pound angler back in a boat, with or without the help of breaking whitecaps? Our only solutions would have been to tow the passenger 20 miles to breaking surf, or wait for Coast Guard assistance. On a day when the GPS was acting up, probably a loose wire from pounding waves. What if it had been winter, where low water temperatures are a serious threat? I've probably written about this before, but we once rescued an elderly guy off the inlet on a fast, outgoing tide. He probably weighed 240 or so. My four 30-year old passengers couldn't pull him aboard into the 23-foot Mako, there was no way. Instead we hand-towed this guy a couple hundred yards back to shallow water. Swimmers are just too low in the water and helpers on the boat bent over like a jackknife, trying to lift a heavy load from below deck level. I did have a captain in the Florida Keys tell me that, back in the early 1980s, local captains could bend over and drag aboard a floating 42-pound bale of square grouper into the boat. But, as he recalled, "they were pretty motivated." A wet angler is much heavier than 42 pounds. Six times heavier, when we towed that guy in.

Another problem: That outboard motor was very loud, I never heard her screech from only four feet away when she flew overboard. What if I hadn't turned around for, say, five minutes? I've fished with hell-bent skippers, mostly in the SKA kingfish tournament circuit, who didn't look back for a half hour, sometimes when we were helpless on deck in the stern (he forgot the bean bag chairs), the boat crashing through five-foot seas at 60 mph, the worst boat ride ever. Fly overboard on those days, and you were probably out of luck. None of us wore life jackets on those trips. Being rescued after going overboard depends entirely on being noticed...

The obvious solution is to wear a self-inflating life jacket. Either with a toggle to manually inflate, or automatic inflation, which is best if you've hit your head, or maybe had a stroke or heart attack before going overboard. I've worn these little vests on hot summer days and you don't even notice them. Compared to the sweltering heat of a vest or regular life jacket, which can leave you sweating and miserable. The little self-inflator PFDs aren't cheap, but neither is a life. Even wade fishermen could use one of those CO2 self-inflators; we seem to lose a few waders every year around the inlets, mostly around San Luis Pass.

People end up overboard for a variety of reasons. Many are accidental, like a stroke or heart attack or even while answering the call of nature. Some jump overboard just for a laugh, even when the boat is speeding along. One guy years ago kept doing just that, whether in the ICW, in the bays or offshore. His friends finally grew tired of circling back and dragging his soggy self back onboard. One day he jumped while a dozen miles offshore, and his buddies simply kept going for another mile, thought they'd put a scare in him. And anyway the Gulf was flat and they could probably find him pretty easy. When they did, he was greatly sobered, so to speak, and realized he didn't really care to be adrift on the Gulf, treading water with no land in sight. That was the day he stopped.

I say buy those loved ones who spend time on the water a self-inflating PFD. They're comfortable in summer and take up no room in the boat. With that extra storage space, you can leave the old life jackets at home and instead carry other useful items. These self-inflatables are available in camo for duck hunters, but they're not the best color tone for being spotted by rescuers. You don't want to hide out there in the water, you want to be found. Red will do nicely.

Those of us who have been on the Gulf for a long time take it for granted we will never end up unexpectedly in the water, but last summer was a wake-up call.