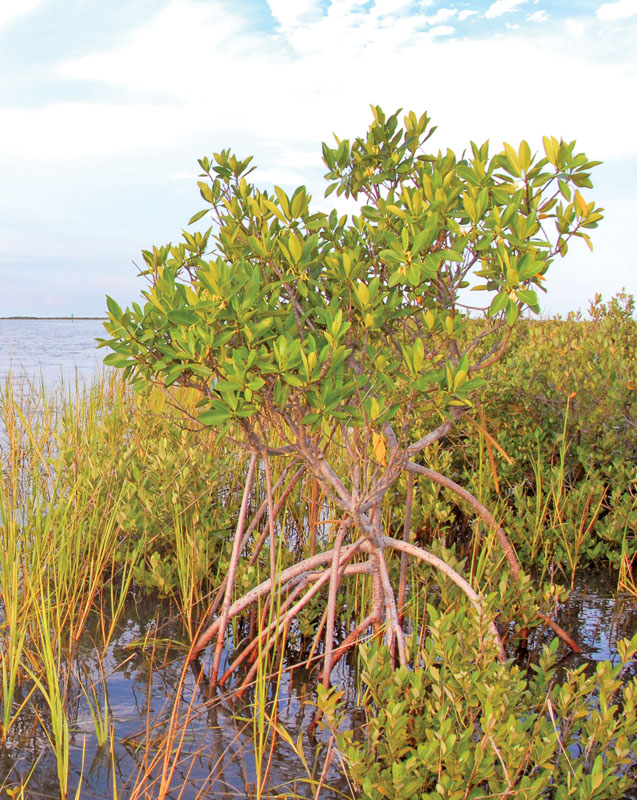 Here’s a red mangrove near Port O’Connor, growing among the more drab black mangroves that have taken over so much salt marsh.

I recently took a new interest in red mangrove trees, after Port O'Connor's Capt. Curtiss Cash pointed out a healthy tree living out in the salt marsh. I'd been around these trees a great deal in more southern latitudes, fished or even snorkeled beneath them in places like Florida's Everglades, the Yucatan and Belize, and have seen first-hand the host of marine wildlife living right among their submerged roots, including lobster, goliath grouper and countless mangrove snapper. But this mangrove in POC was the most northern tree I'd ever seen. Are these tropical trees spreading north? It would seem so.

Red mangroves are expected to live right up to the 28th Parallel, which runs very close to Cedar Bayou on the Texas coast. And Daytona Beach in Florida. North of that line, red mangroves are rare and seldom seen. But they seem to be spreading with these warmer winters we've been having. And that may be a good thing, because these trees fight against coastal erosion and storm surge, while providing generous habitat for birds and marine life. Mangroves grow much taller than spartina (salt grass) and would certainly seem to provide more storm protection. Along with thousands of acres of more cold-tolerant black mangroves spreading up the Texas coast in the past 20 years, is this one of Nature's ways of protecting the coast from rising sea levels?

Back in early 1983, Texas experimented with planting red mangroves on our lower coast. They picked two spots: One near South Padre's water treatment plant, and then on the lower Rio Grande near Brownsville. The red mangrove propagules (floating seeds up to a foot long) were gathered from a distant Daytona Beach on the 28th Parallel; those seeds were thought to be the most cold-tolerant in the nation. The propagules were duly planted in Texas. But they couldn't have picked a worse year for that project; many of us remember the historic, record-setting freeze that hammered the coast that December, wiping out every mangrove and millions of coastal fish. And then two bad freezes hit us in 1989. However, nothing really bad since then. It makes you wonder what might have happened, if the state had planted red mangroves in 1990because we've now gone 26 years without another major freeze. (Knock on wood.)

Today, occasional red mangroves can even be found in Apalachicola on Florida's Gulf Coast, at a latitude of 29.7! Which might be a record for the past few thousand years. That's on Florida's upper Gulf Coast, an area certainly more prone to cold fronts than middle Florida. But Florida just doesn't have the reputation for cruel, blue northers like Texas is famous for. That kind of weather can be very hard on mangrove trees, especially the red. Anyway, if red mangroves ever become established along the IH-10 corridor and upper Gulf Coast, you will know major climate change has arrived.

Scientists are only beginning to study this, but with warmer winters and rising seawater, there is open speculation on what effect expanding mangrove habitat will have on wildlife, when or if coastal marshes change from spartina to mangrove trees. In Texas the black mangrove has expanded fast and I'm not sure what critters live back in those thickets, above or below the water. They certainly trap marine debris and probably harbor rattlesnakes and other critters. Black mangrove root systems seem too thick to offer cover for fish, and anyway these trees prefer slightly higher and drier ground than the red, which thrives in constant salt water. Texas biologists are also concerned about whooping cranes, that favor open coastline with a good view for predators, while wading around looking for blue crabs; the last thing they need is coyotes attacking from ample cover. This same cover is now a plus for coastal duck hunters. The ducks, not so much.

Capt. Dean Thomas of Slowride Guide Service has been monitoring red mangrove trees near Port Aransas "since 2009 or so."

"I've been watching them closely and taking pictures," says Dean. "There are 12 dozen red mangroves for sure, maybe 15. Some are sprouting above the black mangroves. Little baby red mangroves are popping up now, so they're spreading. I've taken pictures of the propagules hanging from adult trees. They're growing in beautiful places, little winding creeks. For now, they're not in the kinds of places that would hold a bunch of fish.

"State biologists came out to see these trees, and their conclusion was that a storm tide brought them in from somewhere else, and now they've spread. The biggest tree here is now eight feet tall, 10 feet in diameter, and loaded with seeds. I don't see why the state would be against the spreading of these trees. They actually filter the water. There must be a hundred reasons to have them in Texas."

Dean, who often guides from a kayak, can be reached at (361) 758-0463 if the public would like to view and/or fish in the area where these trees are found.

Serious benefits for having red mangroves on the coast have been described as: breeding habitat for wildlife; they are the beginning of a complex food chain starting with their leaves dropping in the water; they offer protection for maturing wildlife; they assimilate and filter pollutants from upland runoff; improve water quality; protect shorelines from erosion; and stabilize bottom sediment.

They might have added, save lives. When the massive tsunami in Indonesia killed a quarter million people there and in neighboring countries, it's been said that there were no deaths where healthy coastal mangrove forests still exist. Something to think about, next time we have a hurricane.

"I regard red mangroves in Texas as a natural extension of range, due to climate change," says Amos. It's an ongoing process. They're certainly beneficial to wildlife. They bop along in the current, originating from Mexico or points further south, and wind up on Texas beaches. We've been finding occasional red mangrove seeds on the beaches here for years."

Jason Tunnell is president of the Coastal Bend Bays Foundation and also works at the UT Marine Science Institute.

"Our local red mangroves have been here at least 10 years. Initially just a few, but they're spreading. We haven't done any specific studies on them so far, there are too few of them. They seem to have their warm spots, where they survive Texas winters. Back in 2008 or so I was trying to stabilize shorelines around some bird rookery islands, and wanted to grow red mangroves. So I grew 150 of them in tubs. I'd found them locally; we had a storm that came up from Mexico, and had seeds everywhere on Mustang Island. So I grew them 2 feet tall in a year. But couldn't get a [required] permit from Texas; they were worried about marine hitchhikers. Or if the reds did take off like black mangroves, it would create a problem. And then there is the issue with whoopers preferring spartina and wide-open country. But reds are such a cool plant. I've seen red mangroves in high-energy areas with wave action, but not black mangroves. And reds stabilize the shoreline better."

So, why aren't more red mangroves being planted by the state?

"People are real leery on genetics, now days, compared to 1983."

Perhaps by using seeds from this now-growing population near Aransas, Tunnell can reapply for a state permit, planting around bird rookery islands. However, it sounds like red mangroves in Texas may be a delicate subject with TP&W.

Red mangroves are valuable trees in many regions of the world. For more information on their importance to wildlife and coastlines, visit: mangroveactionproject.org