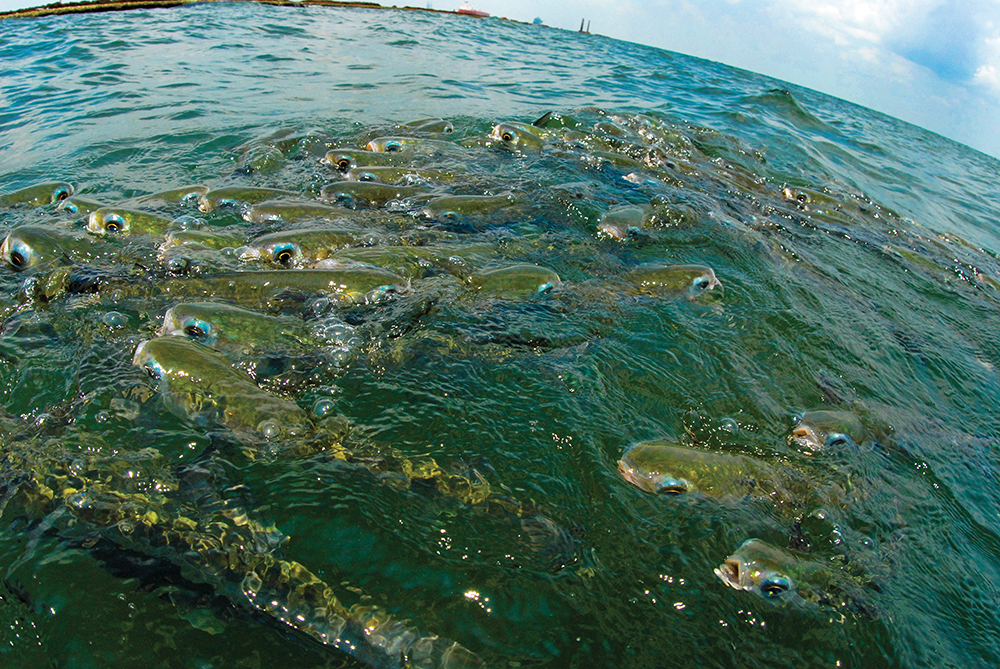 Texas jetty mullet skimming plankton, only a foot or two from our anchored boat.

Consider the humble mullet. It’s true they’re low on the food chain, but stocks of Texas mullet feed trout, redfish, flounder, snook, mackerel, jacks, coastal sharks and tarpon. Without mullet, all of these sport and gamefish might soon be in dire straits. Yet, the mullet gets little respect. Many anglers today have never touched a real mullet. Instead, they throw artificial baits (often) used to imitate mullet. Or they buy live shrimp or noisy, small live croaker. I suppose the ideal live trout bait would be a noisy mullet that will sit patiently in a marina’s live bait tank for weeks. Unfortunately, we don’t have that option.

With admirable foresight, Texas Parks and Wildlife took protective steps decades ago to manage mullet, limiting the size of cast nets and imposing a closed, four-month season to protect bigger roe mullet that are set to spawn each autumn. In fact, their website states that anglers “May not take from public waters, or possess on board a boat, mullet over 12 inches during October, November, December, and January. No limits apply during other months.” This may be news to some anglers; I wonder how many Texans know about that law, or whether it’s actually enforced. It’s pretty serious protection for spawning mullet, and one reason Texas has such a plentiful supply. In Florida, these fish are hammered all year long, readily eaten by the public, their eggs shipped to Asia, or used for bait. Which may explain why Florida mullet are extremely shy of cast nets.

I’ve only seen eggs in Texas mullet once; it was November about 20 years ago, and bay mullet by that month were scarce. I was standing on an ICW seawall in Port O’Connor and saw numerous silver flashes, down deep. We were about to make a jetty trip, so I picked up the castnet and threw, letting it sink deep. The net came up brimming with fat mullet, and I was happy enough. However, at the jetties, I cut a mullet into redfish-sized bites and noticed the fish had an orange egg sack, the first I’d ever seen. Apparently the school was about to migrate offshore, for spawning duties. Whoops! Seeing is believing. Perhaps I’d saved them from savage attack offshore by hungry critters such as kingfish, said to prey on spawning mullet each winter. Everywhere mullet go, they seem to find trouble.

Flashing back even further: Instead of a lemonade stand, I used to sell live mullet by the Port Arthur drawbridge, when school let out for summer after the 8th grade. I had a hard time keeping them alive without an aerator, too. Business was brisk; passing motorists seemed content to buy and use them freshly dead, instead of the frozen mullet from Pleasure Island marina. When the drawbridge was hit by a barge and heavily damaged, I was put out of business. The new, towering bridge to the island was finished three years later but by then I had other interests: boating and camping with my high school gang, slinging lures, or using natural baits still caught with cast nets, including mullet and shrimp. We had the run of that island for three years, with an old station wagon and jonboat, and always caught our own bait. Back at home, my garage freezer was well-stocked with leftover bait.

Texas mullet are thick compared to some states. It’s a fairly easy chore to round up several dozen from our bay beaches, though sometimes you might have to trot after them before tossing the net. Drop-offs are better; let the net hit bottom perhaps six feet down, and these fish never see mesh until too late.

In recent Junes, riding around in the boat and checking favorite spots, Texas mullet were either too big or too small. However, the little ones grow fast and by August-September they’re plentiful.  And just the right bait size, at 5 to 6 inches. Bigger “horse mullet” are either at the jetties or back in shallow bays, often around cruel oyster reefs that are hard on cast nets. Regardless of size, with those small lips, mullet love tugging on hard structure that grows algae—skimming off greenery grown by the sun. Jetty rocks are prime attractions, but also dock pilings and quiet boat ramps. In clear Florida springs, I’ve watched mullet underwater, skimming algae off bottom grass without harming it.

If there are no beaches, like around Sabine Lake, mullet can be hard to target. In that area I’ve had better luck catching them at boat ramps. On calm days at the jetties, mullet may parade past by the thousands, ignoring anchored boats. There, it’s possible to drag in 50 mullet with a single toss of the net. Fill a cooler with mullet, and you’ve got great bait for an offshore trip, or frozen bait for future bull redfish trips. Flat water can cause a filmy surface layer of plankton that attracts mullet, resulting in schools swimming around with their heads out of the water, gulping tiny organisms we can’t even see.

I still haven’t tried it, but the Florida trick of catching them on hook and line might work in Texas waters. For instance at my old junior high school on the ICW in Port Arthur, there are jetty-sized boulders lining the seawall with lots of big mullet, flashing and tugging on algae. In times of need, when redfish in local murky bayous are going crazy for even a small chunk of mullet, I’ve thrown the cast net from those ICW boulders and—you guessed it—snagged and ripped my net. Perhaps those same fish could be safely caught on hook and line. In Florida they’re chummed with chicken scratch, and then caught under tiny bobbers and hooks baited with small pieces of earthworm, dried algae from the rocks, or paper-thin slivers of white plastic bass worm. I talked to one guy who showed me a full Igloo after using the plastic worm trick. He picked up a bass worm and bit off a thin slice, before baiting up.

Anglers who don’t catch and use live mullet as bait are limiting themselves. Live mullet can’t often be bought, because they hardly survive overnight even in a big marina live tank. They need room to swim without getting banged up, and so must be caught the same day they’re used. It’s either learn to use a castnet and spot mullet “sign” on the water or go without. For tarpon fishermen, not owning a castnet can be a deal-killer.

Mullet get big, but they have to live a lucky or protected life to make it. The Texas state record weighed 10.38 pounds, caught on a Bass Assassin worm. The ponderous fish was just shy of 30 inches, a real wall-hanger. Caught in the upper Laguna Madre.

A few of us have caught mullet in the mouth with small spoons and plastic worms, and it would appear they will eat almost anything at times. I’ve seen mullet swarming below a restaurant built over a South Miami canal, eating scrambled eggs scraped from breakfast plates. It was a regular feeding frenzy. Probably a habit they picked up.

After so many years in Texas, I was a little shocked to learn these fish are so prized in North Florida, whether smoked or made into fish dip. Florida may have better water quality; many freshwater springs empty into the Gulf in that area, water suitable for bottling by companies such as Zephyrhills. Or perhaps the natural food there is slightly different. Meanwhile, in Texas they never seem to qualify for local seafood cookbooks. I’ve tried frying silver mullet taken from the clean surf of Padre Island, and they were still pretty darn fishy compared to trout we caught that day.

Which is fine with me. At least we have a huge supply of mullet, keeping our local gamefish fat and happy.