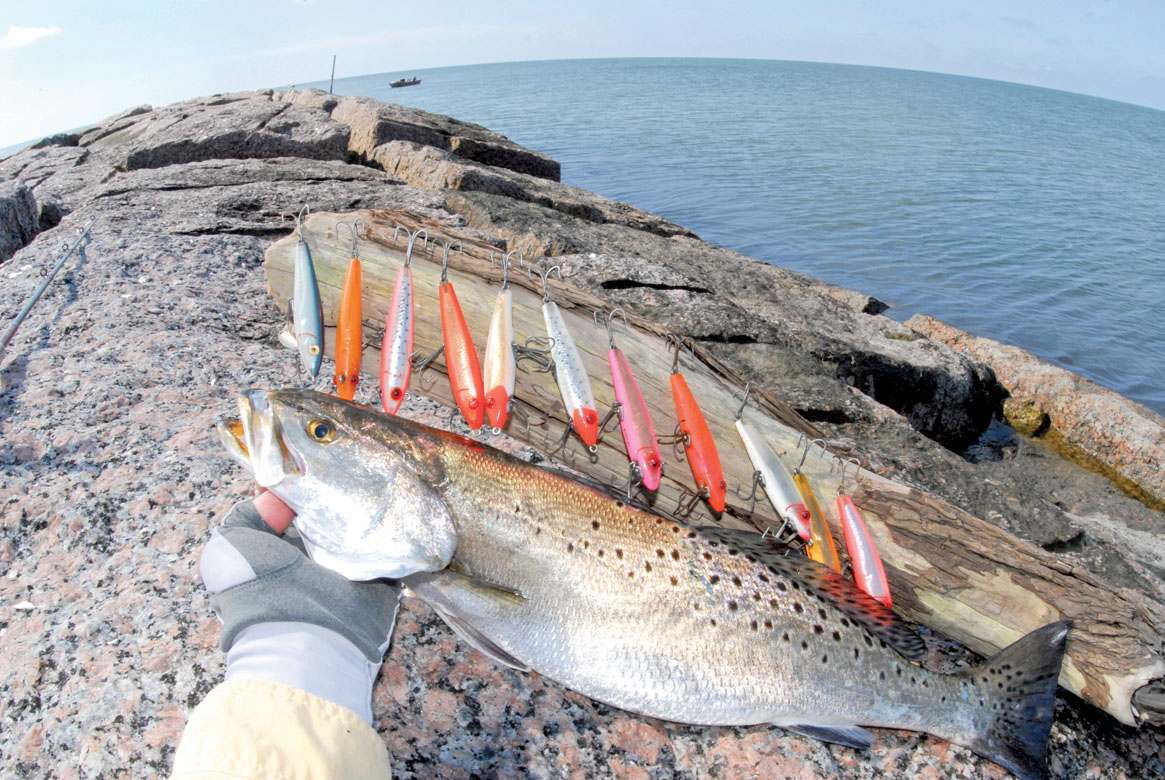 Texas jetty trout caught in June, with a collection of Mirrolures.

Recently a salty veteran from Vidor named Dale Fontenot lent me a stash of his MirrOlures, left over from his hardcore days of wadefishing Galveston's East Bay. They were a little crusty, but he'd sprayed the hooks many years ago with WD-40 and they seem to be fine. Many of these plugs have color patterns that are no longer available; some of them are coveted by coastal anglers who recognize some serious "killer baits." Seeing so many MirrOlures makes me want to return to a simpler time when we slung these plugs all day without aches or pains, and were so eager to return to the water the next day.

MirrOlures were actually started up around Kankakee in Illinois, but the factory migrated down to Clearwater, Florida in 1951. One year later I arrived on the Gulf Coast and these plugs were waiting for me. Though it was 1965 before I was handed a serious rod with a red reel, and a clear 52M model with silver sides. We drifted endless grass beds in about six feet of water in Rankin Bight east of Flamingo, just below the Everglades. Big sharks cruised in there, also tarpon, but mostly good-sized trout. Our drifts were slow, there was little breeze during summer, but my Great Uncle Wib and I always boxed a dozen or more trout in the three-pound class. Then it was off to something else, either snook in the mangroves or lots of mangrove snapper in the channels. We seldom saw another boat.

Two years later I settled in Port Arthur and after a few years on Sabine Lake, concentrated on the nearby jetties at Sabine Pass, using green and gold-sided Mirros. My fishing buddy's uncle had been stationed on the Florida Panhandle and trained his nephew on that very plug, so we were comfortable with them in high school. Sabine Lake was safe for these plugs but we had to be very careful at the jetties; we couldn't afford losses and a big Spanish mackerel could cut off a plug "quick as look at you." A wire leader would ruin the action on trout, so we resorted to cheap gold spoons with a foot of wire leader and gave the mackerel a ton of grief. And we still lost up to ten cards of spoons every summer, while filling Igloos. There were serious losses on both sides.

A few years later I owned a grand total of two Mirros, both of them pink, and one day was stunned to see what they could do in clear green water. It was Memorial Weekend and not a mackerel in sight. Trout, sometimes five or six, were following our gold spoons back to the rocks without hitting. But they went crazy over a pink Mirro, with three or four fish attacking on almost every cast. It was an afternoon tide and we had to get back, but we put together a heavy stringer and released even more fish. It was a serious lesson in what a MirrOlure could do when your daily go-to lure, the spoon, wouldn't work. And a jarring lesson that color makes a difference; they certainly loved pink that day in clear water.

I must have stuck with pinks for a long time after that, because my next fond memory is two of us landing 40 sizeable trout on this plug in Matagorda Island surf. A bonus that day was a six-pound tripletail dragged onto the beach with a pink plug clamped in his jaw.

I'm always up for walking the jetties, a long-time habit and a simple pleasure that doesn't cost much. Our technique has been to anchor aluminum jonboats close by, jump out and start walking. With 20-pound line, which I use around the rocks, I can snag the bow of my anchored boat 50 feet out there and, in fairly calm weather, pull it right up to the rocks and hop aboard. It's the walking and covering hundreds of yards of rocks with a silent approach, while watching fish parade by, and having sizeable trout slam those plugs, which is so much fun. And now, with this new treasure hoard of 52M plugs, I'll be slinging them out into green water through October.

I called Dale back and told him we're heading out to fish the surf this weekend, and could we borrow his collection again. He groaned and explained that he'd lent every plug to his buddy Daryl, who was headed for Belize and wanted to try them out in southern latitudes.

"I don't know," moaned Dale, who was frustrated after a week of heavy rain. "He wanted to try them out down there and I said why not, go ahead, they're not doing me any good right now."

So at this writing 50 of those fine plugs, many of them no longer available in stores, and probably deserving of being framed on the wall, are down south in the rum latitudes–perhaps left dangling from high mangrove limbs, cut off by cruel barracuda or lost to tarpon. I should wait in Hobby airport two weeks from now to find out, demanding answers.

"What about the chartreuse and white? Tell me you didn't lose that one."

And so on. I can see it now, Daryl will shake his head and ask me to sit down before relating some grim tale of lure carnage. I can only hope most of those plugs survived. Maybe the water down there is too clear for these colorful lures.

Meanwhile, long-time angler and fishing buddy Pete Churton of Beaumont has dusted off his modest collection of 52Ms and we will try them if this rain ever stops. "I did a bunch of digging around and found eleven. There's a bit of variety but my batch is definitely heavy on the pink. I remember going through a phase where all the big trout I was catching at the jetties were on pinks. I threw a lot of 52Ms but it seemed like whatever colors I used, they were the most productive," he said.

Houston Chronicle writer Joe Doggett is certainly no stranger to the 52M models, after wading the surf for decades. His favorite color? "As I recall, the go-to MirrOlure during the mid-1960s was the 52M28 (red back/gold side/yellow belly). Still a killer in our typically murky "trout green" surf. In super-clear water, a green back or black back with silver sides was best. Come to think of it, I caught my largest trout (10 pounds, 6 ounces) on a pink/silver MirrOlure. Chartreuse/white was also great, but these patterns came later. I do believe the all-time classic was the 52M28 (red and gold). Problem is, there are dozens of "killer" patterns with this plug. On that note, the hardest task might be finding a MirrOlure color that doesn't work."

Fooling trout with this 60-year old lure is so much more fun than tossing live bait for trout; there is really no comparison. If you happen to be wading and catching trout in the suds on these almost no-action, flashing plugs, that's even better. My friends and I were mostly jetty rats, so we've stuck with that technique through the years. We were often wet out there, even swam back to the boat when we had to, and we all had our visits to the ER from falling. We did avoid stingrays, however. And somehow never heard of Vibrio for two decades.

So, at this writing I am headed for Port O'Connor with Miss Amy for two to three weeks of fishing, and we will be on or around the big jetties almost every day. Armed with an assortment of 52M plugs, of course. Now, if we can just keep them from being stolen by big jacks and tarpon lurking out there

For those interested in the history of the MirrOlure, there were easily 160 colors produced by the year 2000. Whitefishpress.com has produced a book, "A Million MirrOlures: The History of the L&S Bait Company, 1937-2000 that can be ordered online. To quote from their website: "Dozens of incredibly detailed charts and illustrations help the collector identify product and learn more about when and for how long it was made. Over 500 full-color, high quality photographs are a major part of this book and add to the overall impact of the fishing tackle made by an impressive and world class fishing tackle company still in business today."