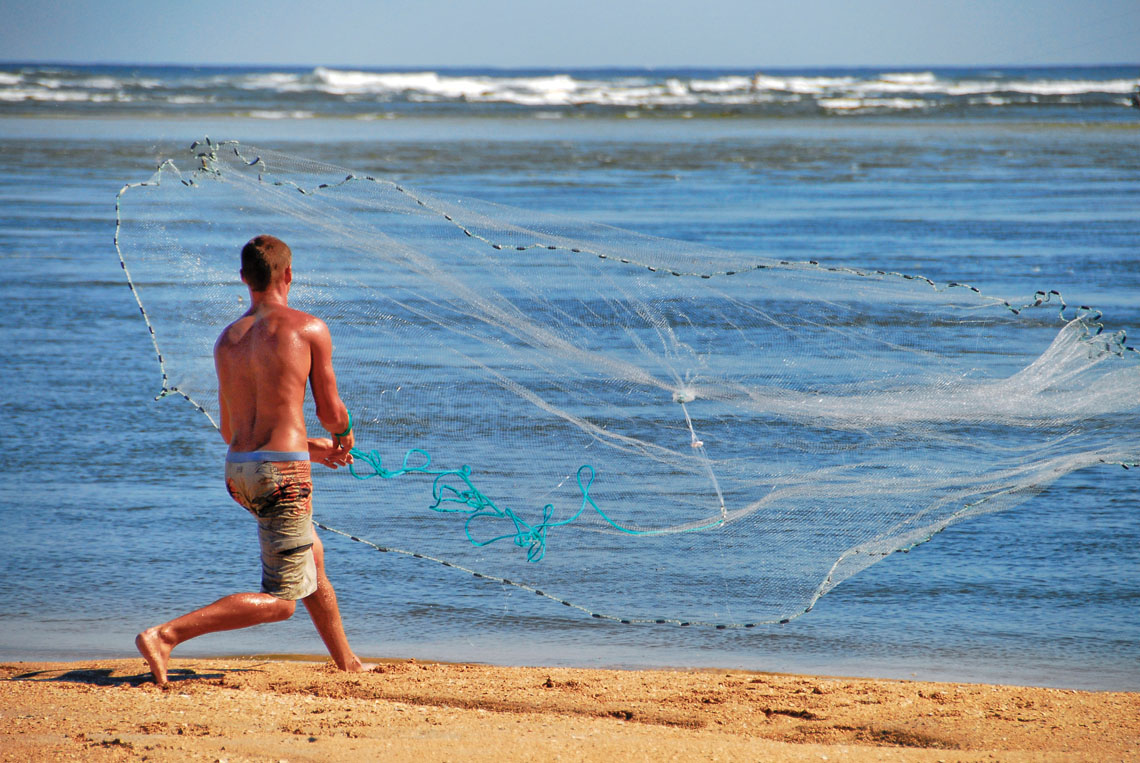 The biggest castnets allowed in Texas are apparently 14 feet in diameter. There is no size limit in Florida. Serious cast netters own several. A small net is more accurate, easily thrown, and can hit small spots in the marsh without tangling in vegetation.

It's fishing time and tournament season. Many of us realize that artificials, some days, just won't work. Now, I'd rather stick a big trout with a MirrOlure more than anyone, but some days just require a little something extra like live bait. Maybe that should be Plan A during a tournament when the hours are short, the chips are down and stakes high. There's a decent variety of bait available along our coast, if you know where to look and how to catch it.

Cast Nets–I'm not sure what percentage of anglers use cast nets, but it seems around 10 percent. I've seen guides who never learned to throw a cast net, and they weren't exactly lure purists, either. When our local marina had no live shrimp or live croakers one blustery June morning, the bay muddy, one guide, before leaving the dock, actually informed his clients they wouldn't be catching any fish.

Merely throwing a cast net off your porch (even over a running cat) doesn't qualify you for catching bait, but it's a good start. You have to be able to read the water and look for bait signs, and have favorite spots. Accuracy counts: Even a small cast net works well, when you can land it on top of passing mullet. Years ago when guiding, I threw the net every day, instead of buying bait. My clients were certainly patient, even walking the beach behind me with a bucket, and we always seemed to come up with bait and then decent gamefish. Many guides today spend a small fortune on live bait each month, and they'd have a hard time believing I almost never bought shrimp or croakers on my own dime. With a cast net I had live mullet, shad, croakers, sand trout and pinfish, and using them we hammered bull reds, jacks and sharks. Also quite a few tarpon that kept us hooked up until way after dark. At one point after a few summers we'd tallied 75 big tarpon brought to boatside. Try getting that kind of live bait from a marina. Live croakers and shrimp won't cut it for big fish.

Marsh minnows–Back in high school I used to catch good-sized marsh minnows on tiny "hair hooks" under a little bobber. The most effective method is to tear the shell off a big blue crab and toss in a foot or less of water, even at a deserted boat ramp, and wait for marsh minnows to feed on it. When you can see the crab jerking around, toss a small-mesh cast net right over the crab. Marsh minnows are incredibly tough; you can keep several alive in a coffee can all day. Great for flounder, trout and reds.

Years ago I had several minnows in a can and we ran several miles offshore to a rig. A 20-pound ling circled the boat many times, but it wouldn't touch a lure. Then I tied a #2 hook to a spin rod, pinned a marsh minnow on the hook, and tossed it out there. That ling went crazy, trying to catch that tail-hooked minnow. The minnow was agile and lasted a half minute before the ling inhaled him. Marsh minnow traps work, some better than others, but they need to be left in quiet canals and require soak time before the minnows accumulate. I fished with a guide in Florida who kept minnow traps baited behind his house, soaking them for days, and they were full of minnows. That's all he used under pop corks, and his customers caught lots of redfish and trout, often while I was watching.

Shad–Big shad school off the beach, mostly around High Island, and under them lurk bull redfish, blacktip sharks, jacks and tarpon. Shad require a bigger mesh cast net. In our upper coastal bays are schooling small "peanut" shad that trout, reds and flounder depend on. Trouble is, these baits are often too small. But try threading four or five on a hook and see what happens. I used to chum with peanuts and one day caught a mess of redfish at the jetties, their bellies full of chum. But after reading how important these baitfish are (regrettably they are heavily targeted for commercial use), I'm careful nowadays to shake small shad back in the water. They're said to grow 5-6 inches their first year, and are vital forage for many fish species. They're filter feeders and clean the water, too.

Live shrimp–Anglers with cast nets around the jetties, and bulkheads on the bays, can catch their own live shrimp. Shrimp are on the bottom, so you might have to let that net sink down 15 feet or so. White shrimp can be baited with canned Ken-L Ration dogfood, and each spot checked with a net every 5-10 minutes. Last summer a friend let his cast net sink all the way down at the jetties in about 15 feet, and came up with solid jumbo white shrimp. They forgot about fishing and kept throwing until their Igloo was full. Along the rock groins on Galveston's seawall, I've thrown for shad there in summer and come up with 5-10 nice shrimp per throw, on bottom only eight feet down.

Mullet–I started catching mullet in the 9th grade in Port Arthur with a cast net, when we realized a 20-foot minnow seine in saltwater was a joke. Port Arthur doesn't really have beaches, and it's tough to find mullet on a day-to-day basis there, even last summer. At one point these tournament-sized redfish were busting me up every afternoon, if I could just find a small scrap of mullet. They ripped a rod holder off my jonboat and I lost the first rod in many years, but I was fighting double-headers of 26-28 inch reds. But then I'd run out of mullet. Even blue crabs and frozen bait wouldn't draw a bite, it was weird; those reds had only one item on their menu. Without local beaches, my best mullet spots were concrete boat ramps, where they hang around to eat algae. Back in Port Arthur you could see lots of them doing that in rocks along the ICW, but jumbled rock is very hard on thrown nets. This summer I may stop there and try a Florida trick, and fish for them with a tiny hook and bobber. I've seen guys wrap almost-dry strands of algae around small hooks, and catch stringers of big mullet. Just one big mullet cut into chunks would have caught another six or seven redfish. Mullet are where you find them, sometimes at the jetties with their heads out of the water at platforms a few miles offshore, or even a bay wellhead.

Blue crab–Easy to find, and last summer crabs were so thick in the mid-coast in August, we couldn't use natural bait at all! Toss out 40 live mullet, and you got 40 crabs. There have been times over the years when we've battled tournament-size reds on half a blue crab. The perfect black drum bait, except redfish sometimes wanted them more. Last summer I was prowling a spot with a cast net, looking for signs of mullet without luck, and there were a few dudes fishing from shore with frozen shrimp, not having much luck. One was hoping to catch a big black drum. I told him blue crabs were the ticket, and he pulled a crab from his cooler and then produced a blade. I showed these guys how to pull the crab's shell off and toss it out there for chum, then cut the crab down the middle, and that gave him two baits. Showed him where to place the hook, in the rubbery joint of the crab's swimmer fin. Before I could leave, that guy lost a big drum (set the hook too soon) and then latched on to another one, which they landed after much excitement. I yelled back at him, "looks like you need another dozen crabs!" and you could almost see this light bulb go off over their heads. There was a scramble to check their crab lines.

Pinfish–Before moving to Port O'Connor, we visited there one October and caught a bunch of good-sized pinfish with the cast net around some bulkheads. Somebody hauled us out to Pass Cavallo, where it was muddy and rough. We set out a couple of medium-sized rods baited with pinfish and holy crap, every fish that hit was either a 40-pound blacktip shark, bull red or jack. Several blacktips jumped repeatedly in the distance, and we were convinced we'd stuck a tarpon, but it was no dice. Every pinfish was gobbled down and we were worn out. So, never pass up a good-sized pinfish. If you're drift fishing, set him out under a cork and something big will likely grab him.

Fiddler Crabs–Diehard sheepshead anglers prefer fiddler crabs that scurry on the shorelines in warm weather. One trick for catching them, without having to chase them with a dip net, is to bury a coffee can on the shore, flush with the ground. Leave a piece of bait in the can. The crabs can smell it and, not being too bright, will try to climb down into the can, where they fall and can't climb out.

Other Bait Options–We've camped on the beach before, and ghost crabs can be caught and used for surf bait. In daylight they're quick as squirrels, but at night they get confused by lights and can be caught. I've only tried them once, but caught a bull redfish.

If you're camping someplace like Matagorda Island without bait, you can pick up oysters and use them. An oyster knife is handy, of course. One winter we had no bait but plenty of oysters, so we cut small pieces and used them around the pilings, catching a dozen barely legal sheepshead. The result? Fresh oysters and sheepshead fillets fried in cornmeal, served piping hot in cold weather. Good enough to make your eyes roll back in your head.