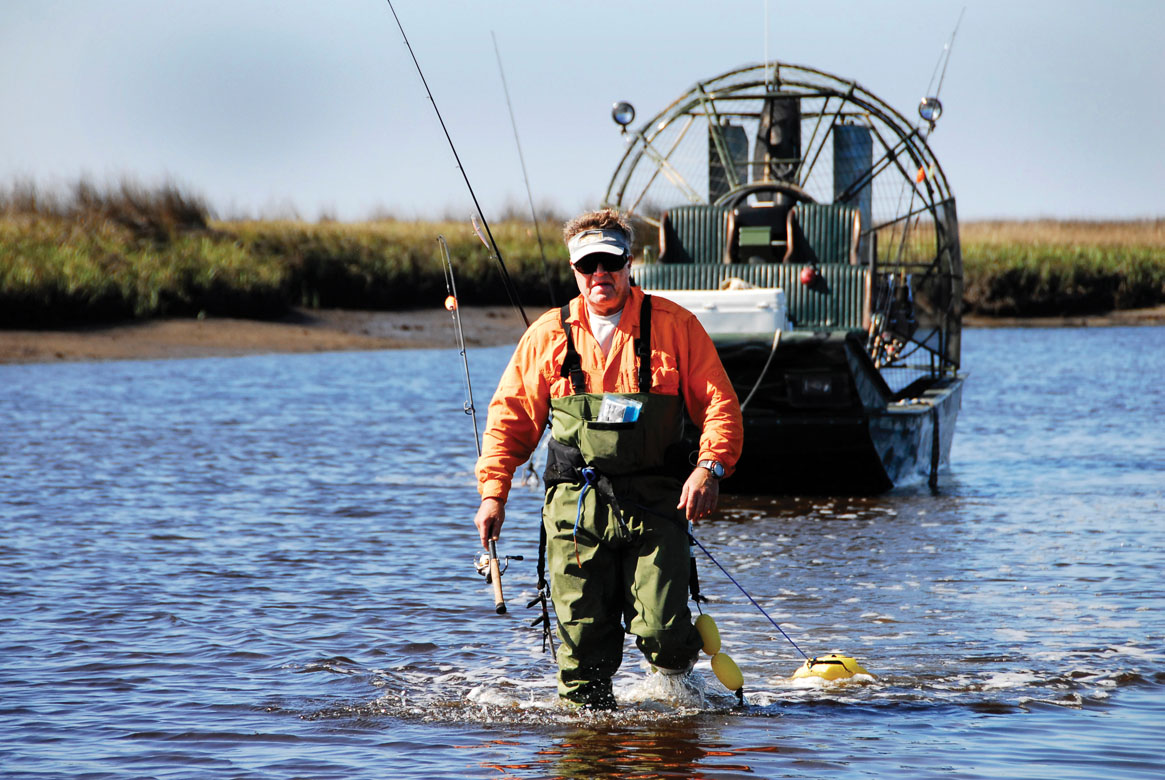 Jump out of the boat and wading to the fish, a Texas coastal tradition. Watch out for oyster clumps, Vibrio, stingrays and sharks.

Over the years I've seen a number of mishaps on the water. In our early years of fishing, mistakes were made and accidents occurred that were never expected. In retrospect we appear to have led a charmed life, after all the things we've seen and done. But there were mistakes, and most happened when we got off the boat. I've categorized some of our mishaps from over the years, things to watch out for.

Out there in the Gulf your luck can run out fast. Few anglers actually climb aboard Gulf platforms, but we did for many years and enjoyed some wonderful days out there, and had a bird's eye view of fish below. But things happened that never would have, if we'd stayed in the boat. For instance, one day during a small, local tournament we launched in the surf and climbed onto a handy platform. My buddy soon yelled that a few big ling were on top of the water at the far corner of the rig on the up-current side. That was the only time I ever ran along the steel catwalk. And fell through a rare, small hole, one bare leg all the way to the upper thigh, which was gouged like a tiger had clawed me. Wearing shorts, of course. Back in town, a bottle of peroxide from a coastal store boiled a bunch of rust out of my leg and had me shuffling in agony like a Sioux Indian.

During high school years we stopped at a rig 30 miles out. Climbed up and fished the up-current side. We turned around and–wow–the boat was 25 yards away, drifting away on the current. Should we camp on the rig or save the boat? Every second counted. Dan jumped after his dad's boat, and ended up swimming about 200 yards before he caught up. He was so tired, he could only hang on to the low transom, resting, before climbing aboard. It was reach the boat or drown; there was no turning back against the current.

Many years later I sold my 23-foot SeaCraft to a guy who took it offshore and climbed a rig, he knew the crew above and was invited up for dinner. Climbing back down, the SeaCraft was a half mile away, and an outbound ship had stopped and was trying to winch it aboard. Hanging vertical, it filled with water and was abandoned, upside down. Somehow Billy arranged for a crewboat to tow it back to Galveston.

A friend came visiting from Dallas and we headed offshore. At the nine-mile rig we tied up in rough seas. He felt bad, and I urged him to climb the rig and take a nap. He was agile and climbed up there, but a roughneck far above yelled at him to leave. So, it was back to the boat. It was too rough to pull the boat in very close, so Mike swung out on the heavy rope, let go, and flew like a bomb right into my boat. Landing on his back on the anchor–wham! He writhed in pain but nothing was broken, and soon we were fishing again. For some reason he hasn't returned to Gulf fishing.

For at least a decade we left our boats and climbed onto the Sabine jetties. You don't see much of that today; it's safer to use an electric motor and troll alongside instead of walking the rocks, often sloshing over cruel oysters and barnacles coated with algae. We caught trout in heaps, and redfish too. Boxes of Spanish mackerel. But everyone I knew was scratched or gouged at one time or another. We didn't even know what Vibrio was, and were wet almost every trip. Except in winter, when we wore rubber boots.

Casualties: Our friend Jay climbed green algae steps at least 10 feet up, flailed his arms, dropped his Igloo, shrieked and tumbled back down, landing with a splash. His blue jeans were flayed and the palms of his hands looked like hamburger, that's what I remember most. We had to take him home on a day when the water was dark green and three-pound trout were waiting on every cast.

Shannon Tompkins learned to fish out there with us, and rashly chased after a brute jackfish that was spooling his reel. He tripped, flew through the air, landed with a crunch, breaking his rod and exposing bone in the palm of his hand. Off he went to the ER for stitches and Keflex antibiotic, the doctor's choice for injured jetty fishermen.

One morning it was my turn. I'd borrowed some lame tennis shoes without checking the treads. On the first step off the boat, I slipped and fell face-first onto the green jetty wall. But I got my hands up first and lay half on the jetty, half in the water. In my palm, almost hidden, was a chunk of oyster the size of a quarter. At the hospital they ripped it out without anesthetic, and then blasted it repeatedly with Betadine, washing out shell chips. It wasn't as much fun as it sounds, and took a long time to heal.

This is the most elemental and fun way to catch fish. Never mind what the stingrays and vibrio and jellyfish and oysters can do to wading anglers–that would take up a few articles. Wearing quality waders would prevent most of these problems. As for anglers who park their cars and wade the surf or bays, they don't really fall into my story line about getting off the boat. They split from the entire program.

The biggest hazard from wadefishing the surf is drowning. Too many have perished in Texas surf, either from rip currents or from drop-offs and outgoing tides at the passes. One day I was motoring in from an offshore trip and noticed a small patch of orange, maybe a party balloon. It was a skinny kid with a small life jacket, with his much bigger granddad hanging on to him. They were sunk right down to their nostrils, drifting offshore in a moderate outgoing tide. Too scared to speak the entire time, even after we delivered them back to the beach.

Even letting someone swim around the boat can be dangerous. Charterboat captains are quick to realize this; they won't let anyone off the boat. Years ago we took a couple of young banker types from Houston offshore. The Gulf was so calm and the action so slow, we finally let them snorkel around the platform. So of course a small ling swam by and they mistook it for a man-eating shark. Both guys freaked out and climbed the platform in their bare feet. One of them gashed his foot on huge barnacles and was done for the day.

More reasons not to swim from the boat: One day while I was treading water by the boat, taking pictures, a kingfish jumped about 15 feet and hit me square in the upper back. With its mouth shut, fortunately. Another time Amy and I were swimming around, cooling off at a platform, when a big ling finally grabbed one of our drift baits. We had an underwater view as it swam through the oil rig and out the other side, the reel in the boat screaming. This was during a tournament.

Fatalities easily happen offshore with scuba divers. Gear malfunction, diving too deep, even a big fish can wrap a guy in his own spear gun cable. In Cozumel alone they were losing 75 divers annually in 1989. That's what the head of tourism told us while we were there, anyway. Often, the current would just sweep them out into the Caribbean. Charterboat captains would see people treading water far from land next morning, waving frantically, and several were picked up. Apparently they weren't fond of treading water all night in depths exceeding 1,000 feet, where mako sharks are often caught.

Today, guys are spearing wahoo and yellowfin tuna in blue water, and this while snorkeling. They make my dive trips of years ago look tame as crappie fishing. After I was nearly drowned while spearing ling while snorkeling, and also getting beat up by a goliath grouper in a cave off Key West, I switched to smaller fish. I've also held a 40-pound ling finally on the surface after it pulled me deep, and had my friend shoot it in the head, (between my hands), and got some powder burns. I was later advised that a .22 bullet can ricochet pretty easy when it hits bone or the boat. Or maybe the top of a ling's head.

I have to include this category, after I stepped off the boat onto a marina dock this summer, grabbed a bag of ice, and minutes later stepped back into the boat with one foot. The other foot, still on the dock and bearing my weight, broke through a rotten 2x6 plank up to my knee, and I was left hanging over the water, helpless, one foot in the boat and the other stuffed through this small hole in the dock. Since I only weigh 178, I was able to hang on for a while with fishing gloves, until two teenagers ran up and pulled me out of the hole. So, watch out for rotten planks on the docks, especially late. That would have been a tough way to spend the night.

Looking back, it might have been a boring life just sitting out there in the boat. I have a higher tolerance for excitement than most folks, so we often left the boat. As they say: you buy the ticket, you take the ride. But I would advise anglers leaving the boat to be careful out there, because there might be a tiger waiting. Metaphorically speaking.