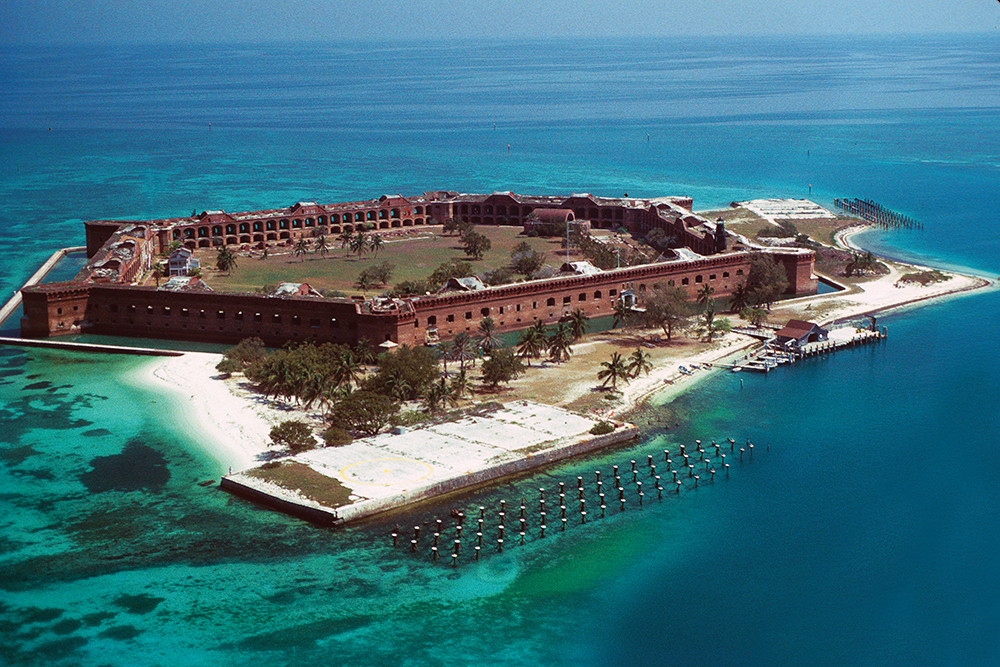 View from the Richard family’s plane as it circle to land for their three-day campout.

We used to make a resolution every year to take the kids on a vacation to some out-of-the-way spot where few tourists go. A real adventure that was manageable for them but also something they wouldn’t forget. Maybe the trip would be a character builder, too. Last autumn I was reminded of one such trip while listening to the 30th anniversary of the Traveling Wilburys, and their famous record album.

Music has always taken me right back to certain trips or even fishing tournaments, and this was no different. Cast your mind back to 1989 or so when some of the biggest names in music history collaborated on a stellar album. It was our sons’ first acquaintance with George Harrison, Bob Dylan, Jeff Lynn, Roy Orbison and Tom Petty.  Talk about a lineup! We memorized that album from Houston to Key West, singing out loud in what is today referred to as carpool karaoke. Along the way, despite trepidations, we stopped in Orlando at Disney’s EPCOT, where huge aquariums full of painted coral and captive fish seemed bogus and sad, compared to our previous boating and snorkel adventures.

After arriving in Key West we prowled Duval Street and next day headed out in a borrowed boat. Returning to some of my old fishing haunts from college days, we actually caught two tarpon while my dad (who showed up from Miami) watched the kids at the hotel. At Sand Key Lighthouse offshore (pictured on an early Jimmy Buffett album), we all snorkeled, saw real coral and wild fish, and had a good time.  Shocked at how much Key West had changed since the ‘70’s (now with cruise ships bearing thousands of burnt-red tourists often from Iowa), determined to introduce the boys to real island experiences, Amy and I chartered a Cessna float plane for a 3-day campout at Fort Jefferson in the Dry Tortugas, a small cluster of islands 68 miles west and way offshore from Key West. The fort, a national park, is the largest fortress in America, built during the Civil War with red bricks from Alabama. It was obsolete before it was finished; it seems that artillery from ships by the end of the war could pierce it like paper. The fort still holds numerous cannon from that era, however.

Our plan was simple enough. The plane would drop us off and return three days later. We had the essentials—an Igloo packed with food, gallons of water, a couple of small tents, fishing tackle, a box of cigar minnows, snorkel gear, sheets and not much else. Circling the island from high above, the four of us stared at what seemed like South Pacific scenery while I took pictures out the window. We dove down, skipped onto the water, it turned out our pilot was a consummate flier.  Once ashore and after unloading our gear, we realized we were the only campers on the island. A couple of park rangers later appeared, one laid back and the other clearly a by-the-rules guy who soon didn’t appreciate us catching 2-pound mangrove snappers from the fortress moat. Young Ian even landed a 3-foot nurse shark, quickly released after pictures. We were barefoot the entire time and had the run of the place.

We soon discovered where the old coal docks once stood, now reduced to a big cluster of old pilings—the very same structure where the battleship Maine refueled on its last voyage. History in the making: anchored next in Havana only 90 miles away, it blew up for reasons unexplained, starting the Spanish-American war in 1898. Soon after, the US invaded Cuba, Puerto Rico and the Philippines, keeping military bases there for a century or so.

Fast forward to modern times and these same pilings are now covered in colorful corals and large sea fans, home to clouds of baitfish. Tarpon, which are plentiful, came rushing out of the dark green harbor drop-off, past our startled faces (while snorkeling), gulping down sardines. The lone beach on the west side was perfect for swimming, and watching strings of big tarpon passing by. With our trout tackle, we didn’t care to hook one and get cleaned out of line. Snorkeling on the east side of the island, I saw mutton “sow” snapper of at least 12 pounds lurking in only eight feet of water.

During the day it was fairly easy to catch live bait with Sabiki rigs off the main wharf, which sits in 20 feet of water. Problem was, the resident barracuda kept taking their share, until our 6-hook rigs were down to 2 or 3. At one point we caught live bait at night with a flashlight and our bare hands, quickly hooking a tarpon from the dock. We should have brought a small castnet.

Campfires weren’t allowed, so each night after dinner we did a lot of storytelling and stargazing. With the island’s generator turned off, we were many miles from any lights, which can ruin night vision. Thoughts of swimming at night were quickly forgotten as there was bound to be a couple of tiger sharks prowling the shallows. There were not too many medics around for first aid, if things went south.

On our last evening, we waited apprehensively for our plane to arrive. The sky back towards Key West was purple with a big thunderstorm. Our Igloo was empty and we had nothing to eat, save a few crackers. Finally, a speck appeared in the sky, a classic “Da Plane!” moment, and soon our Cessna circled overhead to land. And none too soon: The wind was picking up, generating a healthy two-foot chop. Planes have to land into the wind, and so the little Cessna took a beating with spray flying. We loaded up and soon were pounding several hundred yards upwind, leaping over whitecaps, finally lurching into the air.  After a smooth flight we splashed down near Key West almost after dark.

Today, tougher Beaver planes haul passengers to the Dry Tortugas; they’re used in Alaska and Canada, bigger and more rugged for inclement weather, which is a good thing when landing in the Gulf. As we learned less than a year after our trip, two Cessnas returning from the Dry Tortugas went down with families aboard. There were a few survivors, but sharks were involved…

Years later when our kids were in high school, we returned several times to Fort Jefferson, but traveled on the big catamaran ferryboats instead, which could run at 30 knots over 8-foot seas, though the ride can be a little bumpy.  A complimentary picnic lunch was included. Once the ferry returned to Key West with the “day trippers,” a handful of campers (including us) once again had the island to themselves.

On one of these later trips, we paid a little extra and brought a kayak which made it easy to explore neighboring islands and catch our own dinner, which was fried yellowtail snapper on most nights. Best fishing action was over rocky bottom on the north side of the island, visible at the top of the aerial photo. I remember making that first cast, thinking it would take time for a bite, and having the rod almost jerked out of my hands.

On our last trip the head park ranger, who’d been there seven long years, took us on a ghost tour way after dark, pointing out where he’d seen what appeared to be Confederate soldiers loitering about, and also detailing odd happenings indoors. It seems that, back in the day, several hundred people died on this small island from yellow fever, though some were saved by Dr. Samuel Mudd, who was banished to this island prison after setting the broken leg of Lincoln’s assassin in 1865. More history.

Today our kids have grown up and “run off,” as folks used to say. But they still enjoy  camping and fishing and have traveled widely—as in several dozen countries. I like to think our early adventures had something to do with it. So this year, if you’re struggling to think of a different New Year’s resolution, consider taking the family on an outdoor adventure they won’t ever forget, far from cell phone service. Not on some Chevy Chase National Lampoon vacation.