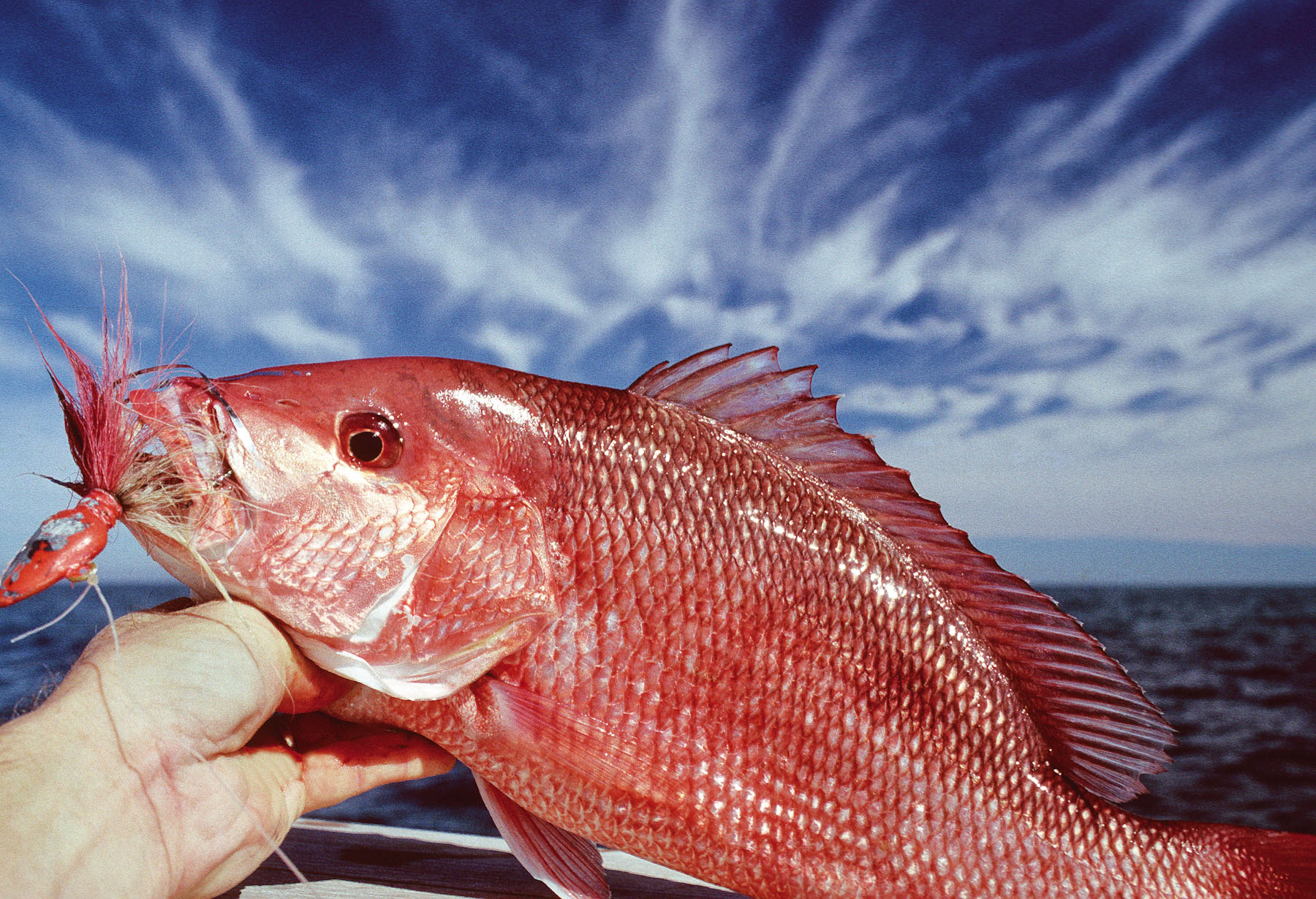 Following a cold front, seas flatten out in October. The weather is fine and the snapper get hungry.
Offshore anglers were unexpectedly granted a two-week bonus snapper season from Oct. 1-14, and a number of boats will once again head offshore. One would assume the effort will be small during school and hunting season, but at least the option is there. Over the years, I've seen very few boats out there in October, compared to the crowded ramps and relentless effort on June mornings, even with a southwest wind cranking. October has fine weather offshore following mild cold fronts, fish are hungry, and this little opening is a welcome event.

The most memorable October snapper trip I ever had was along the middle Texas coast, where I managed two offshore trips in a single day–unthinkable on the upper coast where the runs are longer. That morning in a choppy NE wind, my crew pulled out five-fish limits of what we call "sow" snapper, by lowering jigs tipped with cigar minnows. This around a single platform, with nary a boat in sight. Limited out, despite kingfish cutting off a few mono leaders. Whoops, no wire leader in the boat, kingfish season was supposed to be over.

Back in town while cleaning fish at 1 p.m., two guys walked up and admired the stack of 10- to 15-pound red beauties on the table. They were desperate to go offshore, one of the guys was flying east the next day. I sighed, looked at the flat bay, told them to meet me at the dock at 2:30. While I went home and grabbed a spool of wire leader. We then raced back out to the same platform, almost within sight of the beach, and limited again, this time using wire with our jigs, giving kingfish some grief in the process.

This time, seas were flat calm and it was such an ice cream trip. But we had to race the sun on a short autumn day, in order to navigate Pass Cavallo, and also take the shorter marsh route back to town. I had no desire to stick an offshore boat on a sand flat in the dark. At Clark's Restaurant I once again went after a stack of sow snappers with a tired fillet knife. Miss Amy arrived from the house and kept us going, by setting a huge pitcher of Oktoberfest beer on the cleaning table, bought just inside. What a great time, back when snapper limits were more generous, on a cool day where we never saw another boat. And Clark's was a fine new restaurant on the water with brand new docks and more than ample boat parking.

How times have changed. Except we've been granted a small reprieve with an October snapper season, even if allowed only 40 percent of the bag limit from my trip mentioned above.

So, yes, I have fond memories of October snapper fishing. It's a great thing to fish an empty Gulf in cool weather, without breaking a sweat. However. Not all October Gulf trips carry fond memories.

One autumn we boarded a partyboat with great anticipation, assuming summer's warm water plague of triggerfish were gone, this being back when triggers were a trial and there were no snapper limits at all.

That October trip didn't quite work out as planned; a typical NE wind for the season had the boat rolling and heaving. Up on the bow hanging on, I lowered three circle hooks deep to the bottom. Pulled up a single snapper, here and there. Finally, the stout rod took a mighty bend, I had multiple fish, they even pulled drag. This is gonna be great! It was grunt and wind as the bow rose and fell, all thoughts of seasickness were gone. Ten feet down, a suspicious brown color... On the surface, I had a triple-header of three-pound triggerfish. Whereupon I casually leaned the rod on the rail and retched over the side. In those days triggerfish were scorned, and this was before Bonine, a cherry-flavored motion sickness pill, that mercifully appeared on the market for rough-weather days.

Bent over the rail like a jackknife. After an eternity I straightened up, finally composed myself, and muttered to the grim stranger next to me: Sorry, I don't know what came over me. Nothing is written in stone, when fishing offshore.

Times have changed and today a booming snapper population rules the depths. Triggerfish have been promoted to tasty bycatch status. That is, if you catch a trigger big enough to clean, and their season hasn't been closed. And for the past 20 years, I haven't considered fishing bottom for snapper with the traditional big lead weight and heavy rod. Bigger snapper are confident enough to prowl far above bottom, while smaller fish hug structure for protection. With a daily bag limit of just two, why not use big baits, never fish below the halfway point, and go for the big boys?

If the season is closed, I've fished offshore all day and actually returned to port with nary a fish in the box, a shocking thing in times of plenty out there. On the same day, watched a commercial boat off Galveston cranking up strings of up to 15 snapper on each drop with their bandit rigs, lots of little fish. They target them with small circle hooks and without serious competition today from daylight-feeding triggerfish (like 30 years ago). Now, they're free to bring up strings of almost pure snapper. Though the fish are so smallIt seems like a waste, hitting those small fish on bottom that never reached maturity. Some are thrown back with little or no effort at deflating them. Others are used as cut bait. Their small size means it will take a great many of them to fill a quota that is measured in pounds, instead of fish numbers. That's a lot of little snapper that never reach a decent size, almost a waste of fish.

Today, only a relative handful of commercial boats are allocated 51 percent of Gulf snapper landings, an arbitrary, impractical figure set by federal fishery officials. Commercial captains are assumed to be pretty well-off at this point, selling millions of pounds of a public resource each year. Those with a long history of landings are allocated a bigger piece of the snapper pie. I know of one Galveston captain who may well have landed a million pounds by now, because he was going strong back in the 1980s and was very good at dumping his 1,000 pounds trip limit dockside on a daily basis.

He did this by moving his Galveston boat to Port O'Connor, where the runs offshore are shorter. His crew was worked hard, seldom allowed ashore at Clark's icehouse, this during January when each year's harvest began. It was the heyday of the commercial "derby" season, which was dangerous enough during cold fronts, when commercial boat captains took their chances offshore until the quota was filled. It must have been hard to get a good crew under those circumstances, staying offshore in 12-foot seas during winter's flu season. How many crews considered jumping ship, thumbing a ride to Port Lavaca and later, home? Probably all of them.

Since then, the commercial harvest has changed to a more leisurely, year-long pace, called Individual Fishing Quota (IFQ). These quotas can be traded back and forth among commercial fishermen and remain controversial. Ironically, it is now recreational anglers who face a derby season, starting in the windy and non-desirable month of June. At least the water is warm, if a boat sinks in rough seas. A January recreational season would be material for a new season of Deadliest Catch. October is certainly better.

The snapper population has obviously boomed since 30 years ago, but it can still be improved. Meanwhile the recreational fishery has been crippled with tiny bag limits and season(s), along with expensive operating costs.

Lots of factors adversely impact the overall red snapper population. Shrimp trawls were once the dominant negative factor, sweeping up and wasting a major percentage of each year's snapper year class, millions of fish annually, but hurricanes and the price of diesel have cut back on a massive fleet that once rivaled that of Kubla Khan. Even today, they still damage the snapper fishery with their incessant bottom trawling that has impacted so many marine species.

The dynamiting and removal of Gulf platforms destructive events that floated acres of big, dead snapper has been going on for a long time, but that may be winding down due to public outcry, rotary saws, and other less-harmful removal methods, though these methods are not as cheap as dynamite. Removing platforms by any means still removes reef habitat, however. It is criminal neglect on the part of the feds for allowing dynamite use in the Gulf.

There are illegal recreational catches, where anglers land four snappers each, or twice their bag limit, from federal waters, claiming them caught in state waters on a year-round basis. There are illegal commercial catches made as well: According to news reports, commercial boats have been caught with up to at least 9,000 pounds of illegal snapper, mostly undersized, hidden below decks. There is also careless catch-and-release, when smaller snapper are tossed overboard without being properly and promptly vented at the tip of the pectoral fin. In water depths beyond 200 feet, venting may not help these fish.

Anyway, we Gulf fishermen persevere in a plentiful fishery that has been cut way back since even 2006. According to Tom Hilton, in that year we had 194 snapper fishing days with a four-fish bag limit. We're now down to two weeks with two fish. This October mini-season may be a step back in the right direction.