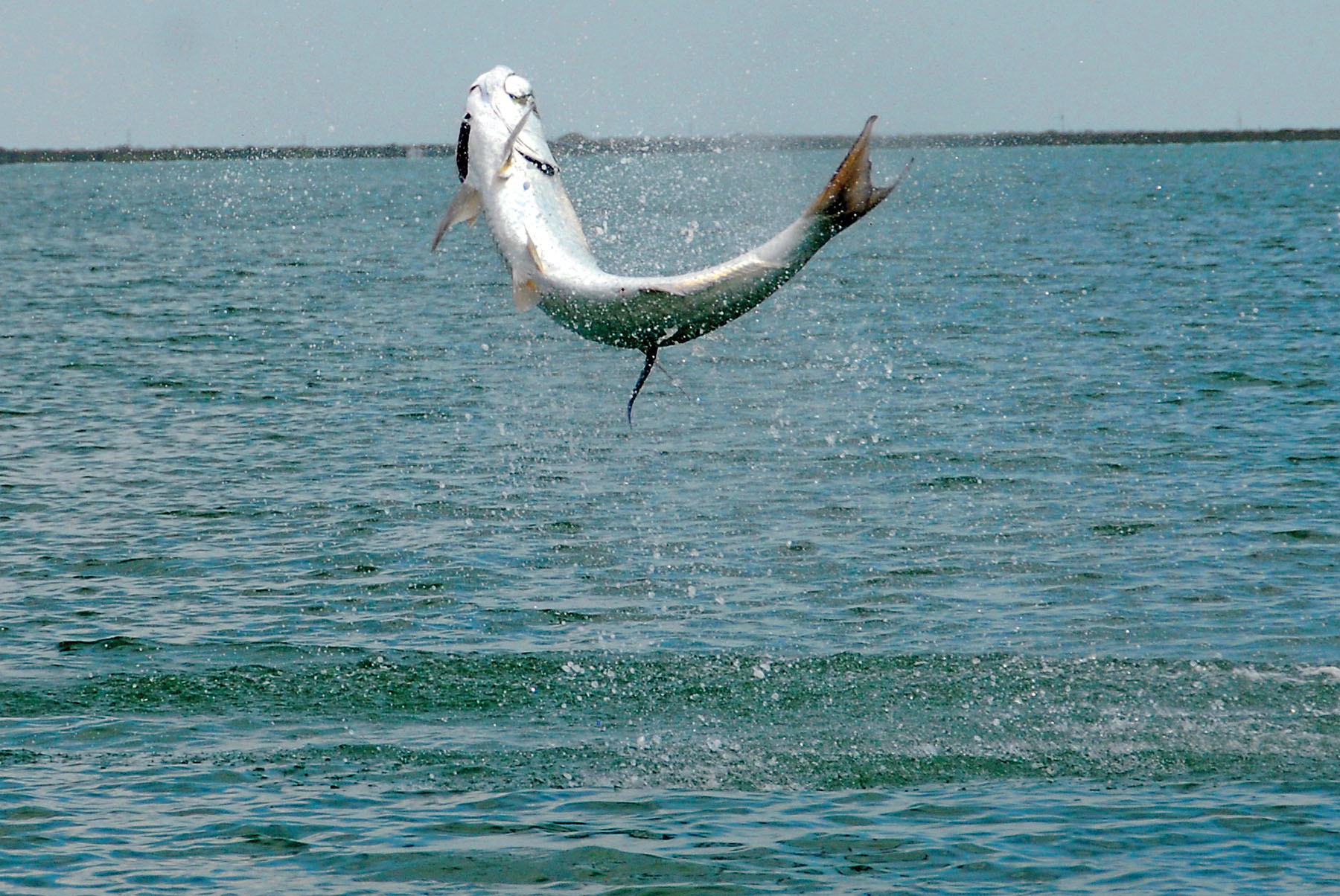 Texas tarpon love the huge drop in angler effort each October, and can be found rolling at the jetties, cruising green surf, gorging on migrating baitfish before winter arrives. Likewise, for the tarpon faithful, it's Heaven having your own tarpon school, watching greedy fish bigger than porpoises chasing lures to the boat. Glance around and nada, not another boat in sight.

Summer's crowd is mostly gone, returned to their own autumn rituals. Boats are in storage, football stadiums jam-packed and a million bags of corn roll down the Interstate, bound for deer leases near and far. Meanwhile a few of us are fighting these amazing fish of a lifetime, sometimes in weather cool enough for windbreakers.

We've caught plenty of October tarpon over the years, even landed a triple-header while listening to baseball's world series on the boat radio off Port O'Connor. All four rods bent double with big fish that somersaulted and crashed around us, though one eventually tossed its circle hook. With only two anglers on our boat, we had a problem.

Somehow everything held together and we landed all three. I got mean with the first fish and released the 90-pounder in record time, then pulled anchor and let an incoming green tide carry us into the bay. My second fish, estimated at 120 pounds, took more time; he was a patient beast resting out there at 100 yards, keeping the rod doubled over for more than 20 minutes before I could grab it. Oh, man. This party was just starting. I wrenched the rod out of the gunwale holder and wrestled with number two. We drifted along, cranked and gained line, sunset came and went. The north breeze grew chillier, with a cloudy overcast. Around us in pitch darkness were huge splashes, tarpon wallowing like hogs, showering menhaden or mullet by the hundreds... Finally, my second tarpon was alongside and I grabbed the leader with gloves, hung on until he calmed down, then released him.

Two down and one to go. This biggest tarpon led us further into the bay, then eventually sulked 20 feet deep in Saluria Bayou, saving her strength, jumping only once. It was a huge tarpon hooked on 30-pound line and our lightest rod and it sorely tested Miss Amy, who for the longest time had perhaps only 20 wraps of line left on her spool, until I cranked the outboard and followed. It was like trying to raise a big shark on light line. Around 10 p.m. its huge bulk finally appeared with the aid of our Q-beam, swimming ponderously four feet below, pacing us with a broad tail. After several attempts I was finally able to hang on to 200-pound mono leader with both gloves. Measuring seven feet with a thick girth, it was possibly a state record, but released to fight again. By the time we navigated back to POC in skimpy windbreakers we were cold, tired, hungry, and ready for refreshment that would seriously fortify, shall we say, any Scotsman. A tarpon triple-header on a late October night? Get out of here! Or in the vernacular of our times today: Shut up!

Year after year, autumn tarpon action was outrageous, and our command post for a half dozen years was Jimmy Crouch's rustic rental mobile home in Port O'Connor, two blocks from Matagorda Bay. On his porch at mid-day there was tackle to mend, baitfish and chum to sort, boats to clean – all while Crouch, POC's unofficial mayor, held court and offered sage advice. (He now has a bigger trailer in the same spot, with more tales to tell).

My tarpon-hunter friends from Port Arthur became quick believers in October tarpon on their first trip to POC when I took them on an all-nighter, anchored in Pass Cavallo in my 23-foot SeaCraft. It was a dark-of-the-moon night with an incoming tide: Every time we dozed another reel howled, followed by a big splash nearby. Soon all three of us had landed good-sized fish in the 100-pound range. We stowed away tackle to grab a few hours sleep.

From then on, the tarpon crews returned each October, staying five days or longer, racking up big scores, making two trips each day split by a peaceful siesta. Our technique was simple enough: Castnet live mullet, croaker, menhaden, sand trout, anything in the six to 10-inch range, and pin a 16/0 circle hook through their lips. Fish on top and bottom in the deeper parts of Pass Cavallo. Often we ran out of bait, thanks to bull redfish that covered us up, or marauding jack crevalle (averaging about 22 pounds) that would hammer every rod on the boat, leaving us baitless when tarpon finally appeared... The pass has sadly shallowed since then with the big jetties nearby robbing it of water volume and flow. (Widening the ship channel from jetties to the Alcoa plant far across the bay might well finish historic Pass Cavallo.).

But tarpon are opportunistic and still around. Today theyve shifted more to the big jetties, just like at Aransas, Mansfield and South Padre. They also school along the coast in 10 to 30 feet of water (like always) on their migration back to Mexico. They're also in deeper bays; monster fish scattered over miles of open water, though fewer in number, requiring different tactics: Set up a drift with multiple lines and watch the horizon for one or two rolling tarpon, often just a brief white flash. If you spot fish, ease upwind and deploy the lines again. You just might hook up with the king of the bay.

Fishing two years ago with Scott Alford during his Tarpon Tomorrow tournament made me a believer in finding big bay tarpon. Within three hours we landed a fish weighing 175 pounds, a feisty one that soaked Victoria tarpon guide Curtiss Cash and bloodied the ear of tarpon tagger and fish scientist Bruce Ungar from the University of Miami. These big puppies are best tagged and released while still somewhat energetic (and certainly not limp in the boat, a wasted fish and tag). Doing so makes it more of a contact sport; Bruce also broke a rib an hour later on wet fiberglass during another running battle. However, salvation soon arrived when two babes from a nearby center console plied him with small pills that worked like magic. He was soon grinning wildly for no reason and shouting encouragement at nearby boaters who were hooked up... By then we were two miles off the coast, where contestants had found a migrating tarpon school averaging about 80 pounds. They called in the cavalry and Coon-Popped the school, and several boats soon flew six or more tarpon release flags. The calm August weather helped.

Our early tarpon successes meant simply anchoring and live baiting. In retrospect, we should have also tried prowling the coast, pulling a spread of Louisiana-style Coon-Pop lures, but in those years we were happy with results; we were fishing close to town where the 100-pounders bite and a cheeseburger was minutes away. For slow-trolling offshore it's easy to make your own Coon-Pops; check out the examples shown from Scott Alford's boat. Scott runs his tag tournaments each summer out of Galveston and Port O'Connor, finishing up this year on Oct. 1-2 in POC. Only the largest tarpon are tagged with expensive satellite pop-up tags, however. When a tag finally detaches and floats ashore, it's retrieved with a tracking device. Sometimes a tag washes into mangrove trees and is difficult to retrieve. One was inside a home in coastal Mexico, where the owner freaked out when a gringo knocked on his door, asking for the tarpon tag inside.

Late-season tarpon certainly seem bigger, often the last migrants heading south for the winter. Indeed, the current Texas record of 210 pounds was caught in October off the Galveston Fishing Pier (of all places) by Jeremy Ebert of Deer Park. That's an outstanding catch and record, when you consider how hard Texas tarpon guides with good tackle and boats have pursued these fish for the past 30 years. Any dedicated pier rat would give his left thumb to catch the next state record tarpon.

Landing a big tarpon isn't easy because they're strong and sometimes crazy. But then what? Of all the big tarpon we caught out of Port O'Connor, we never considered hauling one back to the dock. For almost 20 years, leading up to 2006, anglers were required to carry an expensive kill tag to harvest a tarpon, saving countless fish. Permit or not, we weren't about to kill one of these shiny beasts hoping for a record; it seemed unthinkable. Today, Texas anglers are allowed to keep tarpon reaching 85 inches in length, on the assumption it will probably be a new record. (A 286-pounder landed in Africa was 90 inches long, with a thick girth.)

I've seen a half dozen Texas tarpon that might have been state records, but were either lost after long fights, or unhooked and released in darkness. Today, if I was seriously looking for the next state record tarpon, I'd use sturdy tackle, big baits and fish only in October/November. Hmmm...