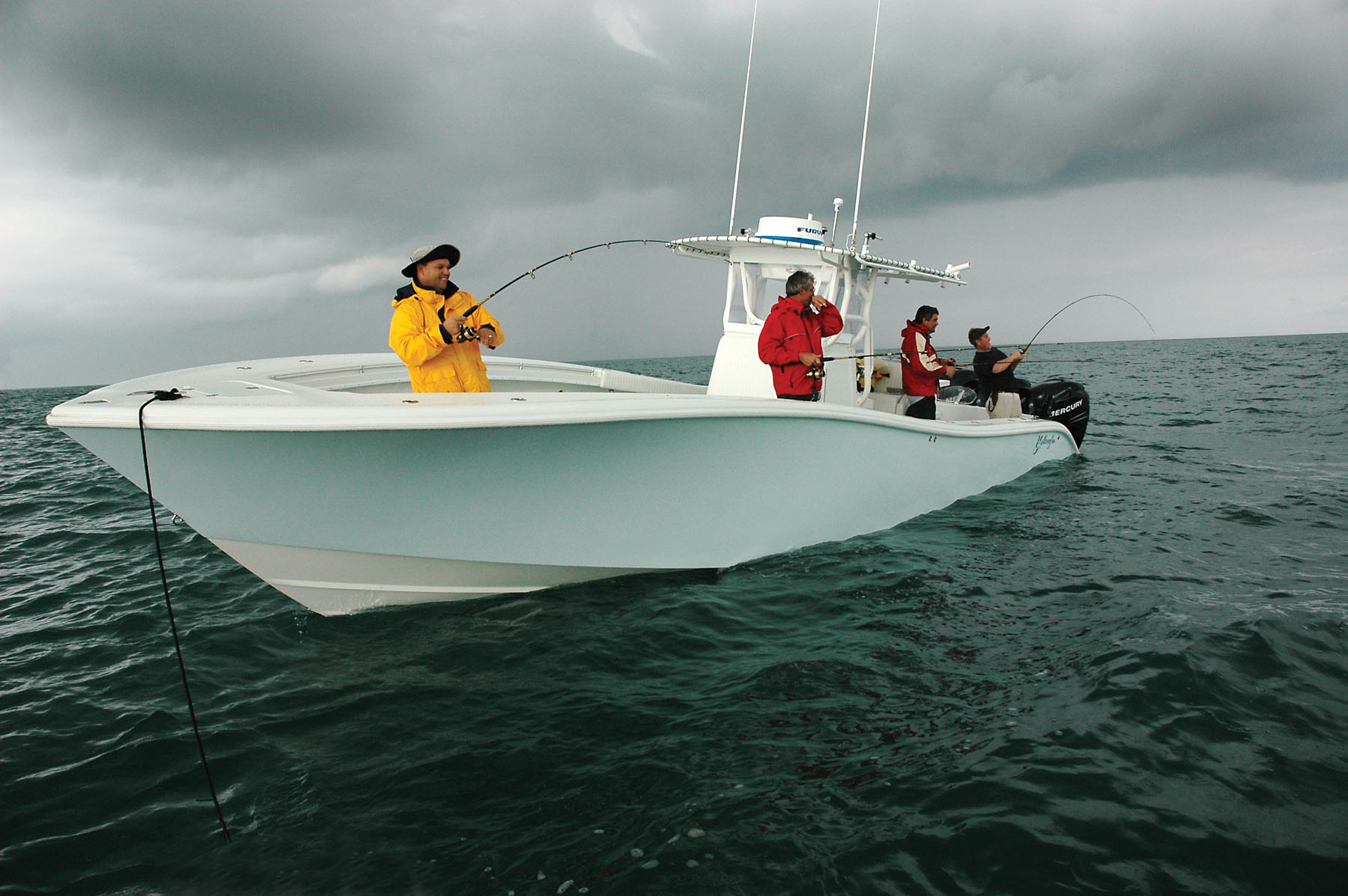 It's boat show season and the offshore crowd is exploring new options, dreaming of new horizons.

The trend today with saltwater anglers classified as "baby boomers" has been a slide towards bay fishing. Many have grown tired of ass-whippings offshore, far beyond sight of land. Even twenty years ago, a tough weekend could make it difficult to climb a flight of stairs on Monday…today boomers are pushing age sixty and as a group they're even less enthused over bouncing off fiberglass. But the next generation has picked up the flag, so to speak, and thanks to modern boat design, many boomers still fish with them offshore. The range and comfort of fast offshore boats today could only be dreamed of, thirty years ago.

Boomer friends and I still fish blue water in the non-yacht class of vessels, largely because we have sons who have taken up the sport. Bud Reynolds and I go back to high school in Port Arthur, and we've seen our share of offshore adventures, starting in boats now considered, shall we say, rather unsafe by today's standards. We both nurtured an early fascination with big kingfish that far predates the 1980s tournaments. Our friends and adventures eventually became material for my book, The Kingfish Bible. (A sort of sequel called Kingfish Bible, New Testament is coming out this winter). After what Bud and I have been through, thoughts of riding small boats on a fickle Gulf carries less appeal every day.

Fortunately, Bud's son Alan is now thirty, a prime age for exploring the Gulf and hammering the tournaments, if you have experience offshore. Alan has the fire and runs a Contender 23T, (really a 25-footer) that we romped around in last summer, but he's ready to move up. Bud and I won't mind this, because a bigger boat means a better ride. Sunk into beanbag chairs in the stern while Alan drives, Bud and I jump up 50 miles offshore both rested and ready to go, when our favorite Gulf platform looms ahead and it's game-time. The ride back is even more comfortable with Senior XX and maybe a nap. Even after a choppy day, we no longer feel like we've been beaten like borrowed mules, as we often did in Bud's trusty 22-Stratos, compliments of a nagging SW wind and whitecaps that forced us to fish sketchy, off-color water.

These bigger center console boats, all the way up to 37 feet, are designed for a relentless pace, even in five-foot seas. And survivability in unexpected 12-foot seas…while on a calm day, the miles just flow by. True, the big center consoles roll some in choppy seas and they're not as stable as a double hull cat, but Alan has the need for speed in tournaments, and there is a big CC out there with his name on it. Offshore tournaments today are designed to bring contestants back to the dock by 6 p.m. or so, a sad change from the leisurely weekend tourneys of 25 years ago. Today tourney fishing time is greatly shortened and fuel consumption and cost isn't even a consideration. To really compete, you need a fast ocean boat, period.

Not everyone is tournament fishing offshore, of course. Young Reynolds acknowledges that and he's gung-ho for snapper trips in blue water with a mix of other offshore species, while always looking for a summer-long STAR tournament fish along the way.

"Having a bigger boat sure makes a 12-hour day more enjoyable," he says. "It takes the headache out of planning trips to other destinations or preparing for out-of-town company. I would hate to pull a smaller boat all the way to Venice and get beat up offshore every day. Or have a weekend planned with friends and have to fish sloppy two-to-four footers all weekend in off-color water. I had several 31-foot Contenders on the radar screen before I traded my 21T for the 23T; I just wasn't sure I needed something bigger. Figured if it was that rough, I was staying home. Now I'm kicking myself for not making a bigger jump."

Alan's words ring true, and nowhere is a bigger, faster vessel needed than with tournaments. Or the bluewater crowd that spends the night 100-plus miles offshore, fishing floater rigs in deep water for yellowfin tuna, drifting nearby for swordfish, or making deep-drops for grouper and tilefish. Those are the guys on the real edge, actually beyond the continental shelf. They fish at night and spend two days out there, and Alan is working in that direction. He realizes you can at least quadruple your fishing time almost with the same fuel, by staying offshore two or three days.

As for overnighters, I'm ready to try it again with the right boat. A three-day trip offshore feels like a month of action, compared with the long day-trips. As long as the boat is bigger, safer and has a little shade. Among faster boats, both the center consoles and cats offer t-tops of varying sizes for shade; any Texas angler in summer knows how precious a patch of shade can be offshore. The heat out there "will make your blooming eyebrows crawl," as Rudyard Kipling said.

There are a few used boat web sites that offer beautiful pre-owned offshore boats for sale, and you can expect the cost to be at least half of retail price, perhaps even a third. Some kingfish boats are listed as far away as coastal North Carolina, where Alan currently has his eye on a 31-foot Contender. But Ye Gods, what a drive to check out a boat. Relegating his search to Texas would save a great deal of highway time. But he's ready.

"I would like to find that boat," Alan says. "Most anglers are looking for the edge in fuel economy, but that goes out the window when you have a 125-mile one-way run and a tournament payout waiting at the dock. The boat with the most range carries the most fuel. When cruising at high RPMs, fuel economy is terrible, to say the least. But you can't afford to slow down and run at an efficient speed; you need to run to your spot, load the bait well and then fish as late as possible.

"I realized my overall 25-footer is uncomfortable if I need to run 100 miles one-way in a confused three-to-four foot chop during a tournament. Leaving out of the Colorado River jetties last summer, we faced five-footers rolling by for the first 40 miles. My 23T could maintain a decent speed in the troughs and performed as expected. But when I had a triple-powered 34-foot SeaVee pass us at 35 knots---they seemed to be eating cereal and drinking coffee---I realized I couldn't compete in those conditions. We couldn't run to where we wanted to fish, because by the time we got there, it would have been time to return. The SeaVee placed in the Calcutta…

"Time is a huge factor, as all the tournaments are one-day and I can't spend eight hours running and two hours fishing. I need something I can comfortably run over 40 knots and 50 would be better, in a three to four-foot chop. Most of these boat also carry at least 300 gallons of fuel, which at 1.3 to 1.4 m.p.g. means a huge range with a great safety factor. My current boat carries 175 gallons of fuel and doesn't give me a comfortable range, and the boat is still small when the seas don't play nice.

"Anyway I like what my dad says: 'Your boat will never be fast enough and it will never hold enough fuel,'" says Alan.

Turn young Alan loose in the Gulf with a quality 31-footer this summer, and watch what happens. First stop is the Houston Boat Show running from Jan. 6-15, and after that? We'll see. I've made a promise to swing one more time from the boat onto a Gulf platform after I pass my 60th birthday, and maybe even jump off the lower deck for kicks, just to celebrate 45 years out there. Alan can drive us.