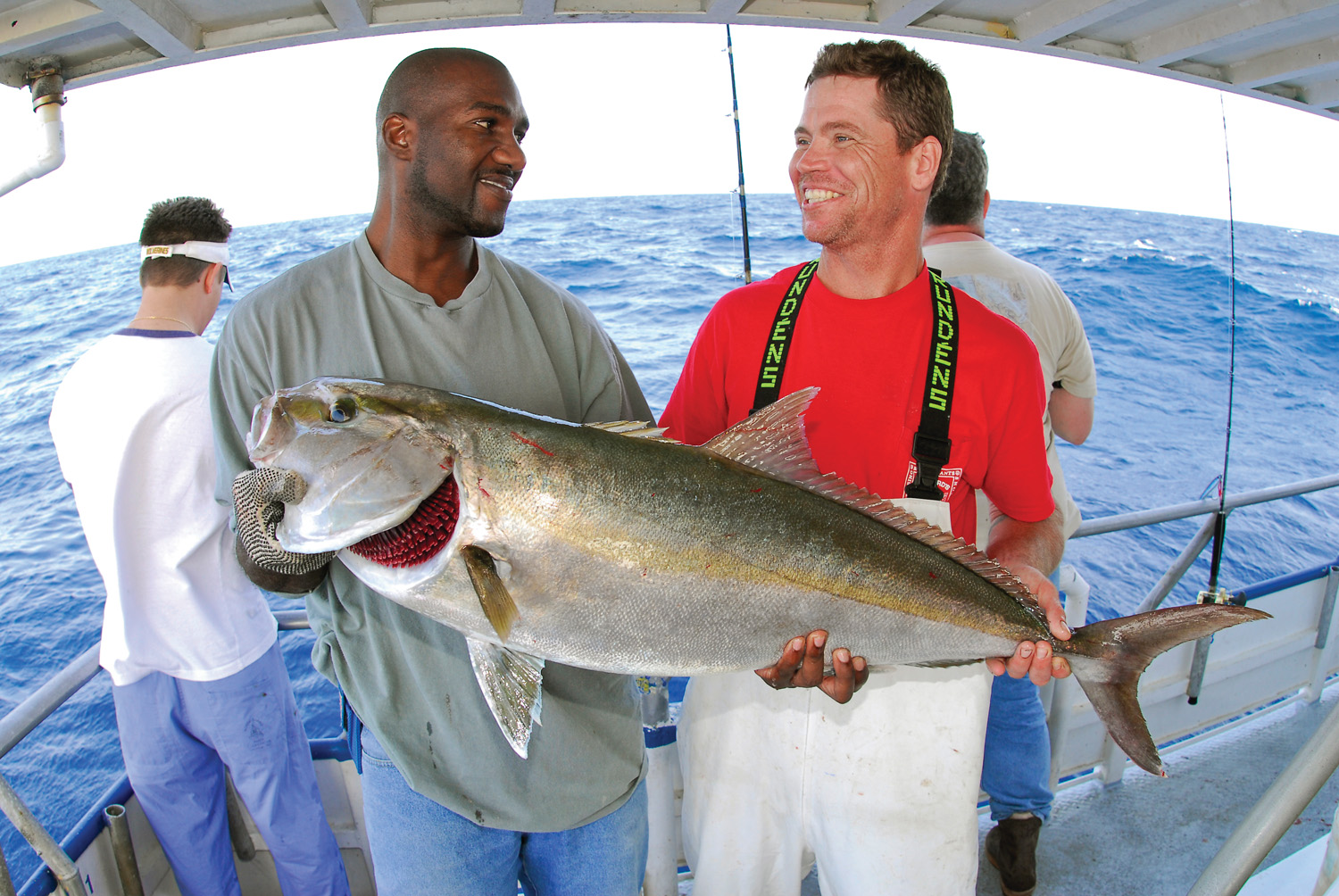 Keeper amberjack with happy angler and deckhand. It’s about to go into the icechest.

After fishing aboard twelve partyboats from Port Aransas to Islamorada over the many years, it gets in your blood and I’ve been missing those long trips offshore. We started in the tenth grade out of Sabine Pass and I still haven’t shaken the habit. Then and today, these extended trips offer time to visit with other fishermen, learn techniques, and generally have an adventure. It’s a nice change; on the big boats you don’t worry about navigation, finding the fish or getting home.

In our early years that job fell to a salty old veteran captain named Leo “Champ” Fairchild on a slow 60-footer named Blue Water out of Sabine Pass. Those wooden, underpowered boats were tough by today’s standards. No AC, lots of cigarette smoke, with late-night card-playing and whiskey-sipping by the old timers. We young rookies could only squirm in our bench seats under the lights, praying it wouldn’t get rough, and try to sleep. Fishing began at 4 or 5 a.m. if Champ found the snapper rock without Loran or GPS, which wasn’t easy. There was only one deckhand, and he fished the entire time unless someone needed a big fish gaffed. Our snapper went into burlap sacks tied to the rail even in summer heat, until it was time to head home, at which time the sacks were dumped into an overworked freezer. Tired on the way home, below decks we could stretch out on eight canvas bunks if we could stand the heat. (It wasn’t bad in winter). During one August trip I have this distinct memory of laying in my sweaty bunk in a delirium on the ride home, muttering the verse to Sky Pilot by The Animals, a popular tune at the time. Up above, the old-timers once again played cards and passed the paper bag. It was all great fun. But perhaps I’m dating myself.

Fast forward to 2017, which was a tough year for the Texas coast. Some boat owners are considering going back to partyboats after losing their own vessels, thanks to Hurricane Harvey. One of them is Dale Fontenot from Vidor. His almost-new center console was totaled after it floated up through the roof of his boat storage barn at Beaumont Yacht Club. It eventually came back down a week later, missing the trailer. Seventy years old, he’s done with owning boats. But as a partyboat veteran, he may return offshore this winter. Dale favors the overnight trips into deep water for big grouper and tuna. When the going gets tough, the tough go fishing.

One can learn a lot about offshore fishing from time spent on a partyboat during those formative years. The big boats offer lots of time in blue water; allow one to get the lay of the land out there (so to speak) while learning fishing long before actually buying an expensive offshore boat.

By the time we were 30-years-old we were catching big kings up to 51-pounds aboard the Big Mama with Capt. Mickey Nash, also out of Sabine. Inspired by the fish we were catching, we entered our first kingfish tournament in Galveston and somehow won $20K the following weekend. And pulled off a repeat the following summer. In more recent years a STAR tournament king was won by a young angler fishing from the stern of a Galveston partyboat, probably the Texsun II. And this was back when the tournament still awarded a new boat for first prize.

We learned quickly that it’s best to bring personal tackle, versus rental gear. Keep a stiff, eight-foot rod handy with a 2-ounce bucktail jig, in case a cobia or mahi-mahi cruises around the boat, ignoring the rental gear. We’ve seen steady action from kings, amberjack and even 10-pound mangrove snappers, if one is prepared with an assortment of jigs, hooks and proper leaders. Back then we used Ambassador 7000 reels, which could cast a considerable distance without backlashing, and were sturdy enough to land big kings. If we were up on the bow, we had room to cast. If stationed on a more crowded stern, we could let out line with the current, perhaps a weightless cigar minnow down a dozen feet and astern where the big kings bite. If the boat tied off from the bow to a Gulf platform, we’d ease up there and amberjack repeatedly attacked our two-ounce jigs.

Making Plans: Partyboat web sites today advise booking in advance, but I can’t imagine paying a week before the trip. If tomorrow’s forecast looks good, then go. But a week? What if seas are six feet and people are sick left and right? The captain is obviously under pressure to make the trip. Over the years I’ve hung over the rail with the best of them, and so try to avoid the rougher trips. Today, I wouldn’t leave the dock without taking Bonine unless the Gulf was two- or three-foot seas or better. Caution advised, however. Taking two of these pills will turn a fisherman into a sleepy zombie.

Friend Dale is fond of fishing aboard the Capt. John with Williams Partyboats in Galveston. It’s a big modern aluminum catamaran that runs at 25 mph. This boat takes trips up to 40 hours for deepwater tuna and bottom fish. Once clearing the jetties, they can be in tuna water in four hours. Meticulous records of their catches (made this past fall) can be viewed at:

Battling tuna at the deepwater rigs is a kick. They school thickly around those deep rigs each winter. I know this after jumping overboard one sunny February day for underwater photos. Below me in amazing blue water swam thousands of tuna. They looked like minnows, but they were 20-pound blackfins. Much bigger yellowfin tuna are out there; the blackfins are often chunked and used for chum. The Capt. John also stops along the way in shallower water for grouper and amberjack.

In case red snapper are caught during closed season, the mate should have a deflator, a hypodermic steel of about 1/8 inch diameter, mounted on a wood handle. Any fish to be released should immediately have this steel or even a clean, thin fillet knife inserted deep under a scale, where the tip of the fish’s pectoral fin folds down to the body. Unhook the fish first, because it may wiggle hard when the gas is removed. Never deflate a fish’s stomach protruding from its mouth—that causes peritonitis and can be fatal, according to biologists. Work fast before the pressured gas harms the fish internally. In waters 200 feet or more, bottom fish likely won’t survive a trip to the surface.

Sharp, sturdy fillet knife: Not some flimsy little blade, but a real commercial fishing knife or a Bubba Blade. Many anglers forget to bring a knife.
Small cutting board: Where else to cut bait? The fillet of a blue runner, sent down 500-900 feet, is candy for a variety of grouper. And it will stay on the hook. Catch them with an Ambassador 6500 reel filled with new 20-pound line, and a handful of 3/4-ounce bucktail jigs. While tied to a Gulf platform yanking these fish over the rail, you may be the most popular angler on the boat. Getting hard-fighting two-pound runners aboard before a barracuda attacks is hard work.
Six to eight pound “window sash” weights if you really fish deep.
Small bucket for storing weights and spool of 200-pound mono leader.
And 16/0 to 20/0 circle hooks for those deep drops.
Rough towel: Great for keeping hands clean and dry.
Knit cap (in winter): Pull it over your eyes to sleep. They also stay on your head in blowing wind while on deck.
Light Jacket: It can get chilly 20 or 30 miles offshore, especially at night in a breeze.
Small pillow: Catch up on sleep during the ride.
Sunglasses: Wear them on sunny days or to grab sleep in the cabin when the lights are left on.
Ginger snaps and ginger ale: Good for nausea. For the happy hour guys, it’s pretty much Bud Lite only, sold on most partyboats.
Ear plugs: Cuts the diesel engine noise and nearby chit-chat while you nap. I favor the blue plugs with ribs, attached together with a string.
Favorite tackle: A long, stiff rod is ideal for casting and jigging AJs and tuna. Short, thicker rods are for going deep with bait.
Ice chest: They’ll make you leave it in the car, but you do have to haul fish home.
Sleeping bag: If you can score a bunk or long empty seat on the boat, a mummy bag is nice in winter. Or summer, if the AC is working well.