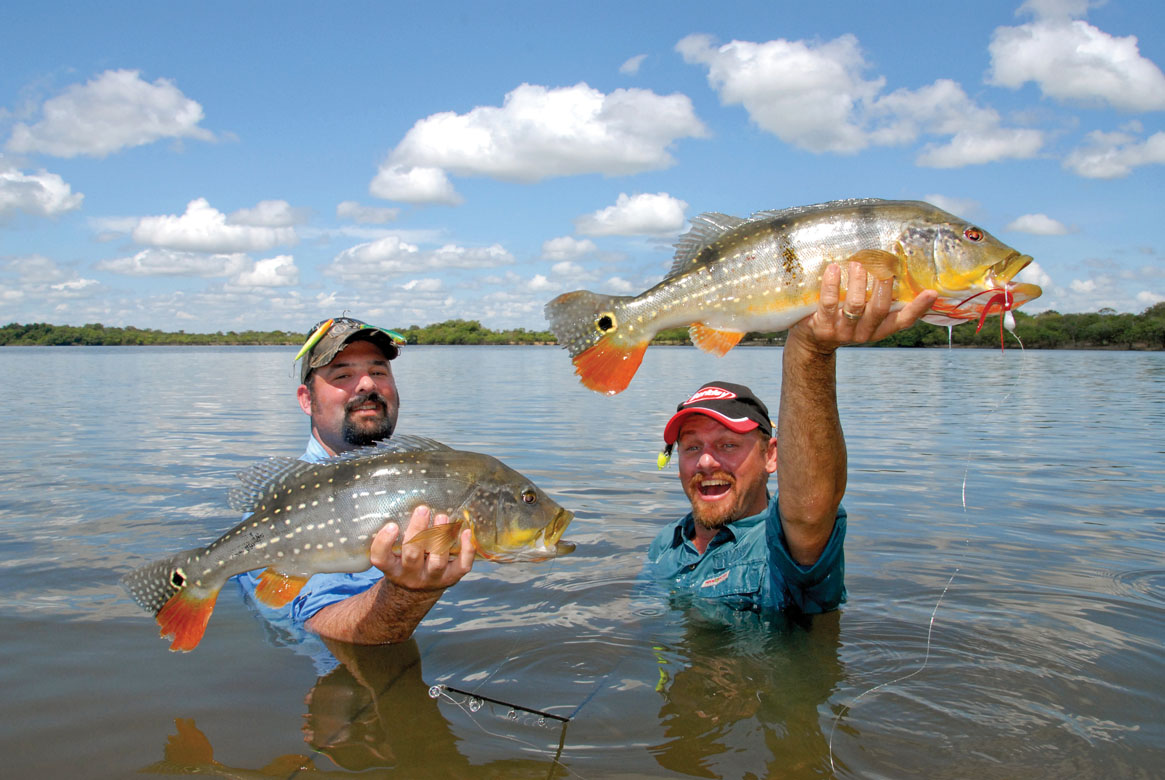 American anglers whooping it up in one of Venezuela’s oxbow lakes. The border with Venezuela is about eight miles behind them.

Ever catch a peacock bass? February in Texas is a great time for dreaming about fishing other venues, and the peacock should be on every angler's bucket list of life's quests. Prime time for catching them is autumn and winter, which is the dry season down in the southern latitudes in Panama and tropical South America. That's when these amazing fish are concentrated in rivers and nearby lakes, which the locals call lagoons. (We know them here in America as oxbow lakes. In Australia, they're called billabongs). Dropping water levels return these fish out of flooded forest, back into the lakesfish that may have never seen an artificial plug. That's a recipe for serious action.

I would encourage serious anglers to make at least one of these trips. One never knows how much time we have, and a trip down to South America, battling these colorful, powerful fish is something not to forget. Peacocks are also present in backyard canals in Miami, but that isn't the same as flying much further south and sampling local food (mostly grass-fed steak) with companero fishing buddies, seeing new country, and battling fish all daythat's why we camp and fish on the vast continent of South America. And last trip we found an unexpected bonus: Best. Wadefishing. Ever. My two travel companions, bass tourney guys from the States, were ready to relocate after 11 days of fun.

The locals there don't jump in the water much because of piranha, and we certainly caught some big chompers there. But while in the water they didn't bother us at all, even though we waded barefoot. We didn't have to wade, but casting from tree-lined shorelines isn't easy. We had occasional johnboats, but preferred to spread out. The weather down there is sunny and about 90 all year long, unless it rains. Nobody advised us to bring wading shoes, or a vest for carrying lures, but we made the most of it. These colorful bass are so vicious and greedy, the huge reservoirs in Venezuela were stocked with peacocks to control piranha populations. The peacocks literally school like tuna at midday on some of the lagoons we fished, and attacked any lure landing close by. American anglers typically favor big topwater plugs to enhance each strike, while our host friends used something as simple as drone spoons, with a single hook that can't be mangled, like these fish often do with treble hooks. My striper jigs were also effective, and could reach way out when we were shore-bound.

On the Venezuela side of the Columbia border we caught a number of 12-pound bass, which was good enough for me. There are 20-plus pounders a little further south in the state of Amazona, but they told me that region is owned by native Indians, and you have to get permission to enter and fish there. One angler who fishes there is Dario Brillembourg, often seen on YouTube with his huge bass, whom I've corresponded with. He's had some adventures, landing his floatplane on secluded jungle lakes.

What we liked most on our trip to the lagoons was the fast action. I asked the guys to keep tally the last day, when we had the lay of the land, so to speak, and we waded into them at first light after small, strong cups of coffee. Seven of us landed an estimated 175 bass by 2 p.m. And this, after stopping for a steak and eggs breakfast. We were fretting about missing some of the morning bite, but our hosts assured us no problem, these fish bite all day. Rest assured, we didn't want to leave later that afternoon.

As we've found out, there are several species of peacock bass. Many sport a black spot on the tail like our redfish, and I've seen them cruise by in schools along the shoreline. The bass, I mean. Once hooked, they jump repeatedly but are strong enough to spool a casting reel, if they decide to leave the area. I haven't been spooled there yet, but one fish did pull about 200 feet of drag, before being stopped on 12-pound line. That line is obviously too light for flooded forest, but we were wading during low-water season with just an occasional fallen tree to worry about.

It's tough country, down there. Bass eat the piranha and piranha return the favor, if you release a bass and it floats away. We found a floating seven pounder, and all that remained was a head and vertebrae. We circled it with the jonboat, and for some reason nobody cared to reach in the water and pick up the remains for a picture. Piranha literally carve out a plug of meat when they bite, and our friends there had some stories to tell.

Other local hazards: My friends always travel in a caravan of three or four pickup trucks, camping in national parks where the fishing can be outrageous. They didn't mention carrying weaponry; that might have been bad form when carrying guests. We camped 40 klicks off the pavement in a region that held three small fish camps. And had the greatest time sleeping in hammocks under a billion stars, and not one of our seven anglers suffered a scratch. Despite wading barefoot with piranha and freshwater stingrays–ugly brutes that shuffled past in the shallows. Other slight concerns were a number of killer bee nests seen in dead trees on the bigger reservoirs. Bump one of those trees with the boat, and you were in big trouble, having to hide under the boat's hull until dark. (And treading water with piranha, not everybody's idea of fun). We didn't see any huge anaconda snakes; our hosts said they look like a car tire sitting in the bushes. They also said the aggressive Orinoco crocodiles have been pretty much poached out.

Cheaper trips for peacock bass are found in Panama and Venezuela. More expensive trips involve flying into remote regions of Brazil and living on a houseboat for a week, with fishing skiffs tethered alongside. That's where 20-pound bass lurk in flooded rain forest, ready to crush all but the toughest lures.

As a side note, there have been kidnappings in South America, but so far I haven't heard of an American being grabbed. One American told me in Brazil their boat and guide was captured, but when the kidnappers found out he was American, they apologized and left him on a sandbar with all of his fishing equipment. (Have a nice day). Took his guide and boat, however. It was surmised that the kidnappers didn't want our Special Forces hunting them down. My friends in Venezuela are pretty casual about traveling the country, and I've crossed it twice on different trips with two different groups. They've camped and fished the national parks for 30 years; their dads worked for Standard Oil long ago and flew much of the country, exploring but also marking prime, isolated fishing lakes that are naturally restocked each winter. And not with fingerlings, but hungry fish up to 12 pounds.

How to set up a trip down there? That takes a little research; there are fish camps with Internet web sites. My friends down there are rice farmers who own cattle, but are also die-hard fishermen. They've taken a number of people fishing over the years, including double-headers where visiting anglers first fish off the coast of Caracas for marlin, before heading into the country's interior to camp and fish freshwater. I've made one of those trips with my son, and we had lots of fishing action. Heck, we even caught piranha from the shore at night, using fried chicken scraps.

Anyway, I have pictures of piranha and other fish we caught down there, with peacock bass stories, on my website at:
http://seafavorites.com/fishing-other-countries/venezuela-read-blog