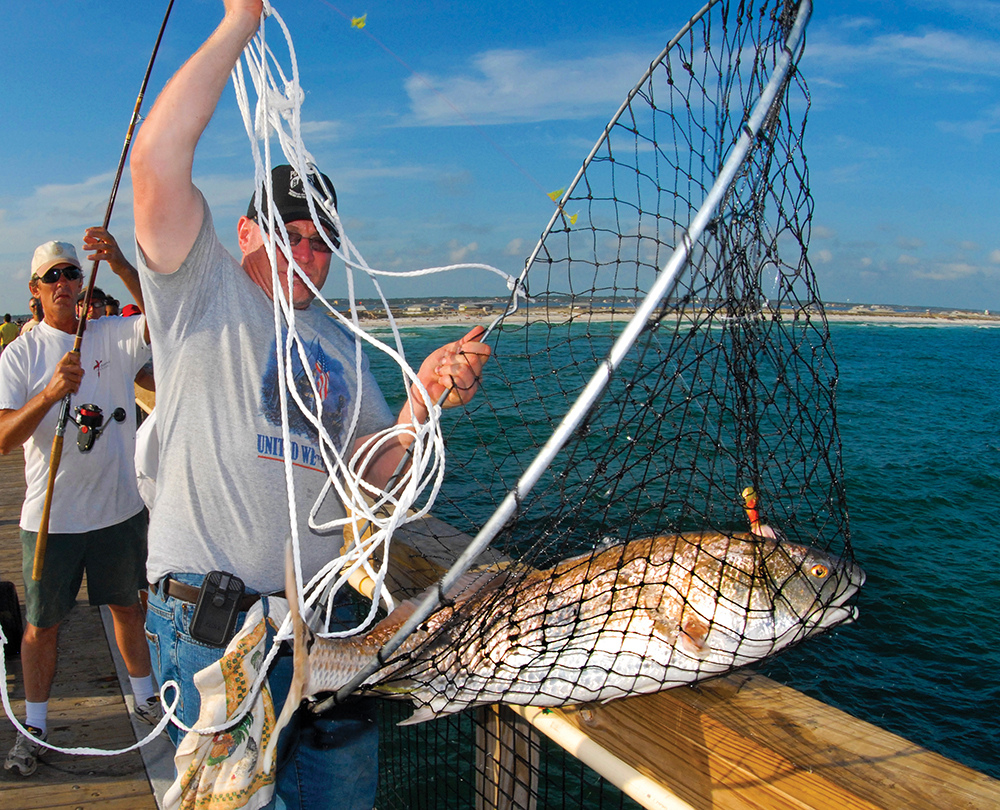 Not all bull redfish are caught in stormy weather. Today’s piers provide big landing nets so these fish can be released.

Piers, whether in bays or the surf, offer easy access over those long artificial reefs. And a height advantage for spotting fish or making long casts. They attract a host of fish. In the bays, it’s easy to imagine a structure-loving flounder or sheepshead around every piling. Bounce a white Gulp! plastic shrimp slowly around each of them, for flounder. Sheepshead nibble on the piling’s barnacles right to the surface, and so dabbling a live shrimp within a foot of each structure is often just the ticket. At night under pier lights, baitfish gather, followed by trout and sometimes redfish.

It’s the big surf piers, built to withstand most Gulf storms, that attract a far greater variety of sporty fish from trout to tiger sharks.

My own early experience with a surf pier was at High Island, a structure made of wood. It must have been built after Hurricane Carla in the early 1960s, back when hurricanes were not so frequent. Somehow it lasted at least 15 years, and it was the go-to spot for catching bull redfish when the surf was huge and incoming waves splashed small geysers between each deck plank. There were some tough, hard-bitten fishermen out there, sometimes fishing all night. With the wind topping 50 knots, you had to lean about 20 degrees into the wind to walk or remain upright. And time everything right, if hundreds of hungry 40-inch redfish suddenly arrived. Mostly we went during the day. Why? After parking in saltwater one night, we witnessed a full moon over a savage Gulf, with mountainous swells that kept the pier shaking. Topple over that waist-high wooden rail and you were a gone goose...

It was not something we cared to repeat. From then on we fished in friendlier daylight in tropical storm weather and as luck would have it, typically saw only three or four of the big reds gaffed and landed by others. Those redfish were bigger than anything we’d ever seen. However our luck was poor, using pool cue snapper rods we used on the partyboats—gear very unsuitable for casting. Another problem was finding prime bait, which is big mullet. With September’s typical high tides, combined with a storm tide, our local mullet around Port Arthur disappeared. The older and wiser pier crowd probably kept frozen mullet just for those epic storm-related bull redfish events.

Today they would call that extreme fishing if the piers were left open in such weather and still allowed fishing, which they don’t. Today someone could make a video of the pier scene described above, add lots of yelling, and have it turn viral on YouTube.

Returning to more sane techniques for pier fishing, it can be broken down roughly into three categories when the weather is agreeable. It should be noted that in doing so I always look for green water, and set up to fish there. If the entire pier presides over water that resembles chocolate milk, then it’s time to cut bait.

1) Starting right near the beach, in the first or second gut between sandbars, are pompano and whiting, most often early in the morning or during a decent incoming tide. Both species are quite fond of shrimp. Small pompano jigs, with a bullet head and tiny, short tail tipped with or without shrimp—that’s the way to go. Fire off long casts and bump that jig slowly on sand bottom.

Specks and slot redfish also prowl that shallow water in the first two hours of daylight, from knee-deep out to six feet. Both are fond of gold spoons, the ¾-ounce Johnson Sprite or the Dixie Jet in different colors. The compact Dixie Jet will fly a long ways.

2) Out at mid-pier one may find Spanish mackerel, also a prime table fish. Once again, the gold spoon reigns supreme with mackerel. They’re in open water, not under the pier itself. Be sure to bring some light wire leader, if targeting mackerel or if they’re hungry that day. Once again, green water is a serious requirement for most mackerel action.

Under the pier below in the pilings are sheepshead nibbling on marine growth, mostly barnacles. From a high vantage point these fish can often be spotted and cast to, or at least a bait lowered down to them if the water is clear enough. Live shrimp is the ticket, though fresh dead (kept on ice) often works. Live shrimp on the pier can be kept alive in an aerated bucket with a small air pump. Which is heavy to carry, unless you’ve got a kid’s red wagon or a bigger cart with rod holders, like serious “pier rats” use every trip. Without a wagon, one old fashioned trick for lugging shrimp and keeping them alive is wrapping them lightly in a dry burlap sack lain on top of a sealed bag of ice. Often they’ll last for half a day and worth the trouble, keeping in mind that almost every fish species around the piers has an affinity for shrimp.

3) Out at pier’s end, way out there, are serious guys with the big sticks, using multiple rods up to 14 feet long. They’re after bull redfish and sharks, mostly. Theirs is a waiting game; each rod is baited up with a whole mullet or at least a big chunk. They’re fishing on bottom.

And then more rarely you have guys using live baits under balloons—they’re after kingfish later in summer, when the water is mostly clear and sometimes even blue. They jig up small live baits, mostly jacks, maybe sardines and sand trout, and pin them to a 6/0 to 8/0 hook.  And then pitch them way out there. If the breeze is behind them, free-spool and each balloon will float further offshore perhaps to a waiting line of clear water. These guys latch into kingfish, tarpon, sharks or even a stray ling. Sometimes even a sailfish. Catching a blue water day on the pier is usually a memorable event.

As mentioned, live bait is often available within 100 yards of piers. Sabiki rigs with six tiny hooks can be lowered down near the pilings, catching various small flashy species. Down the beach a little ways, one may see mullet flipping in the surf, where they can be caught with a castnet. That’s a wet errand, wading out and throwing a net against incoming waves. Fresh or live mullet is prime bait, however.

It should be noted that during summer in the mornings, a light breeze may blow off the land, really flattening the Gulf. Combined with a high tide and clear water, conditions are ideal. After lunch the breeze may slowly turn around and afternoon wave chops will arrive from offshore.

It gets hot on the pier during summer, and you have to make your own shade. If you bring a cart with rod holders, a beach umbrella offers relief and a spot to chill out while waiting for that next bite. A couple bottles of Gatorade on ice is a wonderful thing out there, but that means carrying a heavier load, making a wagon or cart indispensable. You can’t carry an Igloo, live bait bucket, umbrella and chair, plus fishing tackle, without wheels. Not in one trip, anyway. If you don’t have a custom pier-jetty wagon, shop around or check out the toy section in Craigslist for a used red wagon. (Today’s kids have mostly abandoned them for electronic toys). A wagon’s four wheels will really take a load off your shoulders. A wheelbarrow might suffice, but would certainly look bogus and sad to regular pier rats.

Piers are also a safe place to get kids started on fishing. They’re often deprived from nature these days, and anything we can do get them unplugged is a plus. If they’re really into it, then maybe there’s a boat in their future.