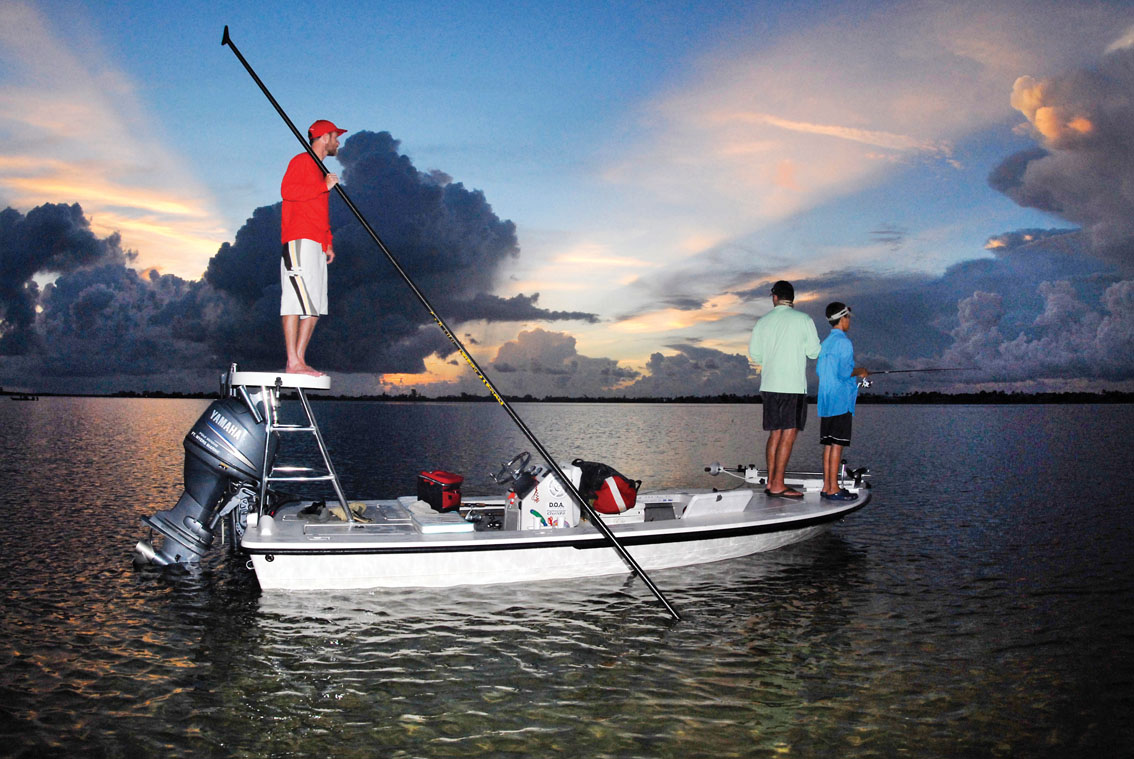 A coastal guide waits while anglers cast at fish during dawn’s early light.

I don't usually write about equipment in the boat, but consider for a moment the humble push pole. Way down in the southern latitudes where flats fishing is king, push poles might simply be just a long cut stick, yet look at the service they provide during a day on the flats. There's something about the feel of honest wood on the hands, while poling a boat towards visible fish. I've never owned one of the lighter graphite poles, and certainly understand a guide on a tower may need a telescoping model up to 26 feet long (and some muscle) to move a boat a mile or more each day.

I'm making a case here for almost any boat to carry a push pole, and not just for the shallow water guys. I fish everywhere from the flats to offshore, including the jetties, and have needed a push pole on many a day. Even at sketchy, shallow boat ramps before the day begins...

I'm a fan of stalking flats the old-fashioned way, with a pole, observing everything in view, versus planing a boat across thin water, looking for startled fish wakes. Or worse, burning a shoreline for miles. I think if boats didn't use their motors within a hundred yards of shorelines, we'd see a lot more big trout and reds up in this water. We wouldn't have to wade out so deep, either. (I'm also for keeping some flats motor-free as an experiment, to see if fishing improves there, but that's another subject).

Consider the advantages to having a push pole on almost any boat. They can be mounted on the gunnel of course, but even on deck shouldn't trip an angler, since they only point towards the bow and stern. In 20 years, mine have never been mounted, unless I tied one on a boat's gunnel. My own push pole history is a little unusual, and was born of necessity.

I used to own a 25-foot Mako and for a time fished on the Gulf side of Florida. That pole was only 10 feet long, a fat wooden dowel bought at a hardware store. I bolted on some scrap wood at one end, so it wouldn't sink into soft bottom. Along that coast were numerous limestone outcroppings, from shoreline out to maybe 300 yards. Running an outboard engine through there was asinine and expensive, like buzzing through the oolitic limestone found in Baffin Bay, except in Florida there is miles of rock. The only way to get in close to the shoreline was by push pole. During most of the day that big boat was out in deeper water, but at high tide we'd ease in shallow looking for big trout and redfish. In that region, all of our redfish and big trout are found around these rocks or near the grassy shoreline. (Further out in six or eight feet of water, it was all drift-fishing for two-pound trout). Anyway we would idle inshore with one motor running and tilted shallow, watching for rocks, then cut the motor and drift downwind. If a rock loomed ahead of our drift, I'd pole around it. If the wind was calm I'd pole shorelines or explore in rocky creeks.

This was a crappy, 10-foot stick that I used to burn bagworms out of my trees back home. (Wrap an old t-shirt around the pole, soak in gasoline, and the bagworms fell in flaming heaps). Yet this same stick worked for years and years, saving my twin 150-horse outboards from cruel rocks. After 20 years I still have it, though it has become warped. It still works in the marsh while duck hunting, and has even pushed 30-foot ice floes away from my boat on a river in Iowa. It's great for snagging decoys and dragging them to the boat, too. However, it looks pretty decrepit these days so I built another one.

This one is 12 feet long, the same two-inch thick wooden dowel from a hardware store, and cost $1 dollar a foot. I bolted on three little chunks of wood on the end, so it won't dig into mud. Also coated this new pole four days in a row with polyurethane. It has a golden color, is waterproof and doesn't warp. It fits very well on my 15-foot jonboat and never blows out. Last summer it saw extensive use during almost two months of coastal fishing on the Texas coast. How?

>It's great for poling thin shorelines or over oyster bottoms with the motor raised.

>If we drifted into shallow water while throwing a cast net, I could pole our way back out before lowering the motor. Climbing out and pushing the boat can land you on top of a stingray. Somehow I've never been hit, and maybe having that pole on the boat for 20 years saved me a trip to the ER.

>I have also shoved the boat away from jetty rocks numerous times, when we drifted too close. If someone loses an anchor at the jetties and the boat won't start, boat drifting into the rocks, a push pole (really a long boathook in this instance) could save the boat until help arrives.

>On several occasions I used the pole to grab the dock with the blunt end, before tying up. Or shoved away from a crowded dock with a bad wind blowing.

>Several times I grabbed a wellhead in the bay, to tie up or push away from, not wanting to use the motor around fish. Shorelines too, if the wind or current shifted but we were on fish.

>The pole is nice during the low tides of winter, if the water is too shallow and you don't feel like jumping overboard in cold water, to push the boat out deeper.

>In an emergency where the engine is damaged or out of fuel or the prop is wrapped in wire from a crab trap, you could pole the boat a good distance without getting wet, into a channel marker area where passing boat traffic could offer assistance.

The truth is we never know what the day will bring, and a push pole is just one more tool to catch fish and get the boat back safely. A push pole may look dumb offshore, but consider the people who have had their boats damaged or sunk, when fiberglass tangled with rigid steel platform pilings.

So much for all-purpose, home-made push poles. I like the feel of wood in my hands while moving the boat, but serious shallow-water anglers, especially guides who fish day after day, need something longer and lighter. Which will cost them, of course.

The longer graphite push poles like the Stiffy, ranging from 12 to 24 feet, can gobble up a thousand bucks in the upper-size range. However they're able to cover miles, while poling from a spotting tower. These high-dollar poles however are one more item to guard from theft, even in restaurant parking lots. One more valuable item to worry about: One Keys guide had his push pole blow out on the highway, and he quickly parked and jumped out of his car to save it. And got his legs broken, when he was run over by the very next car. These push poles are precious items on serious flats boat in Florida, and might be considered a guide's best friend, so I won't knock their price. In the Keys, you don't buzz up and down the flats hunting and spooking fish, because bonefish will just keep on going until they reach deeper water. Redfish in Texas will at least mill around and maybe settle down.

It does my heart good to see a Texas boat patiently (and more importantly) quietly exploring a shallow back bay, using one of these high-tech poles. Far away from the noise and boat wakes. It is, after all, an old-fashioned technique going back a thousand years. And I concur with Capt. Scott Null: While exploring the back bays so quietly, will anglers please for God's sake turn off the cell phones and observe a little nature.

These shallow water specialists have their favorite push poles; I'm just an old multi-fishery guy who has found them to be very handy. They've probably saved my lower units any number of times. For $12 bucks? Yeah, I'll take that. Besides, you don't have to worry much about someone stealing a wooden push pole. And there is always the unexpected: Coastal anglers have had rattlesnakes actually swim into their boats via the motor-well. You can smack 'em with a push-pole before they even get close.

General advice on high-end poles for daily work on the flats: Guides often use a light, graphite stick that is four feet longer than their boat hull. The stick should be even longer if used from a poling platform. A short pole requires more effort, especially over soft bottom when the pole's foot sinks in. It may not require much effort to move the boat 50 yards with a short stick, but the hassle factor just keeps growing during a long, hot day.