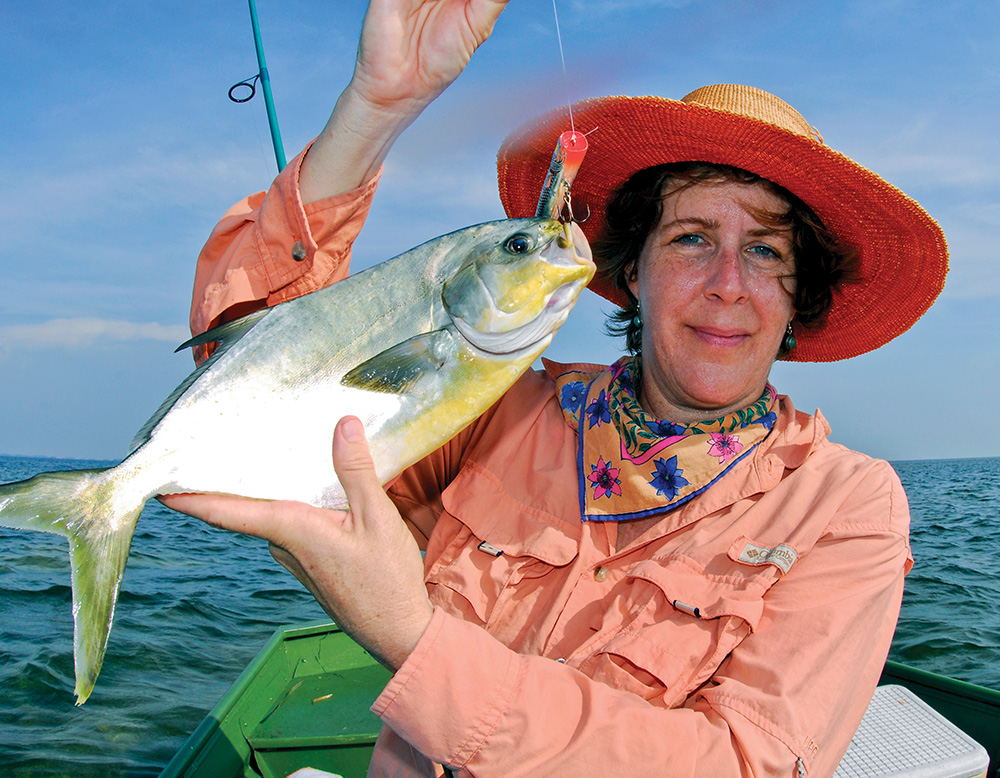 Pompano even hit topwater plugs on rare occasions. A mid-depth spoon or jig works much better.

I’ve run into pompano, a fairly unknown fish on most of the the Texas coast, a number of times over the years. They’re always a bonus fish mixed with the day’s catch, and worth a great deal to connoisseurs of seafood who know what they’re dealing with. This is a fish so rarely caught, that Texas still has no daily bag limit. Yet, they’re out there if you know where to look, mostly in the surf or around Gulf platforms.

One of my fondest memories of pompano came the first day I ever took out a fishing charter. It was April and neighbor Capt. Lee Richter in Port O’Connor called at 6 a.m. to announce he was overbooked, and had 12 people standing around in his yard, ready to go fishing. Six too many. I’d just earned my captain’s license days before in Houston and hadn’t even prepped my 21-foot Mako for such a trip. But I scrambled in a timely fashion and soon drove the group down along the Matagorda Island beach a few miles. It was a perfect calm day with green water, real ice cream conditions. What could go wrong? I’d even scored a quart of live shrimp to avoid slinging artificials in that crowded boat.

Back then there were a number of surf wrecks along the island, great fishing spots, and we eased in close to one and dropped anchor. Everyone flung out shrimp under corks and the action started. There were a few trout and redfish but better yet, a number of hard-fighting pompano, the first we saw that year. I think the group took it to heart when I counseled them on what a prize those pompano were. When the crowded boat made it back to POC, they unloaded and thanked me. It had been a satisfying day. But back in the neighborhood I ran into Richter, who was skeptical we’d actually caught pompano.

Lee brooked no nonsense; he was this colorful old guy who’d flown B-26 bombers over Europe, and lost a lot of friends there because they were often shot at. He had many wonderful stories from later years, including racing boats with John Wayne while parts of the movie Hellfighters was filmed near Houston. He’d been around the block a few times, so to speak. And he was pretty sure I’d kept a bunch of small jack crevalle and pawned them off on my charter. Jacks, compared to pompano, taste like horseflesh. He implied there was no way we’d caught pompano.

I advised him that I’d been selling pompano as long as 15 years before, back in Port Arthur, to Louisiana people who knew the fish quite well. Lee muttered and finally left, still unconvinced. Never did tell me what he caught that day. Since then, people have asked what’s it like being a fishing guide and now you know what happened on Day 1.

While the trout crowd lashes the water on almost a daily basis, the furtive pompano escapes notice except from accidental catches. And even then they’re mistaken for jacks and often discarded. Where does this happen? After hitting a small plug or gold spoon in surf or at the jetties, mostly. But there are ways to target these fish.

>Pompano will stick around through mild winters in the Padre Island surf, because the water temps down there are warmer than the rest of Texas. And usually more clear, for that matter. The classic way to catch pompano is in the surf, of course, with long rods of 14 feet and more. You bait up a pair of Kahle hooks with shrimp and heave it way out there, hoping the pyramid weight will hold bottom if the current isn’t too strong. Some spots are better than others, especially where surf water flows back out, what they call a riptide that swimmers should avoid. This is a technique so effective that there are guys on Florida’s Atlantic coast who make a living doing this. Selling their prized pompano either wholesale or to select customers. And the fish are fairly numerous. They even named a town along that stretch called Pompano Beach. These guys are barefoot on the sand every day, dialed in with their buddies where the best action is. Reeling in fish that retail for something like $15 a pound. The bait is free, sand fleas (mole crabs) that live in the wet sand. It must be a fairly stress-free life. For the fishermen, that is.

>From surf piers, serious anglers target the first gut in shallow water each morning during high tide. Pompano, sometimes schools of them, are rooting out small crustaceans—either crabs, shrimp or tiny clams. (Pompano prefer shellfish). Small pompano jigs, designed for long casts but carrying short tails, are a favorite weapon. During the retrieve these jigs kick up small puffs of sand and pompano follow. Florida has any number of people who tie their own pompano jigs, and sometimes sell them. My source is James Warf in Fort Walton Beach; he uses quality hooks and they cast like a bullet. I won’t even risk them when Spanish mackerel are around. Which makes them hard to use at Gulf platforms off Texas, where pompano and mackerel frequently mix.

My first reliable source of pompano, when fishing out of Port Arthur for decades, were Gulf platforms in 30-50 feet of water. (May and October were best). If our boat was tied up and we got bored, I’d climb up on the lower deck of the rig using a handy swing rope, while carrying a baitcaster rod and a few jigs. Also a five-gallon bucket to carry fish. Inside the rig if the water was clear, you could often see a dozen pompano down about 12 feet, circling slowly, swimming on their sides, reflecting the light. Ease a small jig or spoon down there and jiggle it around, and pompano would circle and bite. It was a short, furious battle keeping them out of the pilings. Members of the jack family, these puppies are strong. Then I’d lift them a dozen or so feet up to the catwalk, unhook and set them in the bucket. Otherwise, they’d flop back in the water. I’d generally catch three or four before the others wised up. These were saved for our friend Dr. Ferguson, originally from Baton Rouge, who paid a tidy sum. Enough for our next fishing trip, anyway. In those days gas was cheap and our boats were small.

We still sling small jigs out there at the platforms if pompano are spotted, often during the May run of small blue crabs that pass by in the current. Or by blind-casting gold spoons and letting them sink about 20 feet before the retrieve. I used to scrape barnacles off the pilings with a gaff or whatever was handy, expecting sheepshead to arrive, and sometimes pompano beat them to that fresh chum. It seems pompano like barnacle meat too, though they don’t have teeth and are poorly equipped for nibbling on such hard growth. They do have crushers at the back of their throats, good for grinding up tiny surf clams and such.

That’s what we found inside our pompano several years ago, after an epic morning anchored near the surf, landing 20 keeper pompano without much effort. Two of the guys didn’t even fish, just took pictures. We slung out small Warf jigs tipped with half a live shrimp. All around us, pompano were jumping, spooked by the rolling boat. Pompano bounced off the boat hull or flew into the motorwell and then straight into the Igloo. So, if you’re cruising the beachfront (in a boat) and see these fish skipping away from the hull, that’s a sure sign to anchor up and start casting.

That same day, we called in two other boats with friends aboard, and they enjoyed the same action. One boat had been back at the marina and by phone we told them to buy a quart of live shrimp and get out there, quick. Knowing nothing about small jigs, they anchored nearby and threw corks with shrimp underneath, and landed eight pompano. Keeper whiting, that often mix with pompano in beach surf, were also caught by all three boats.

We had some fine seafood dinners after that day.