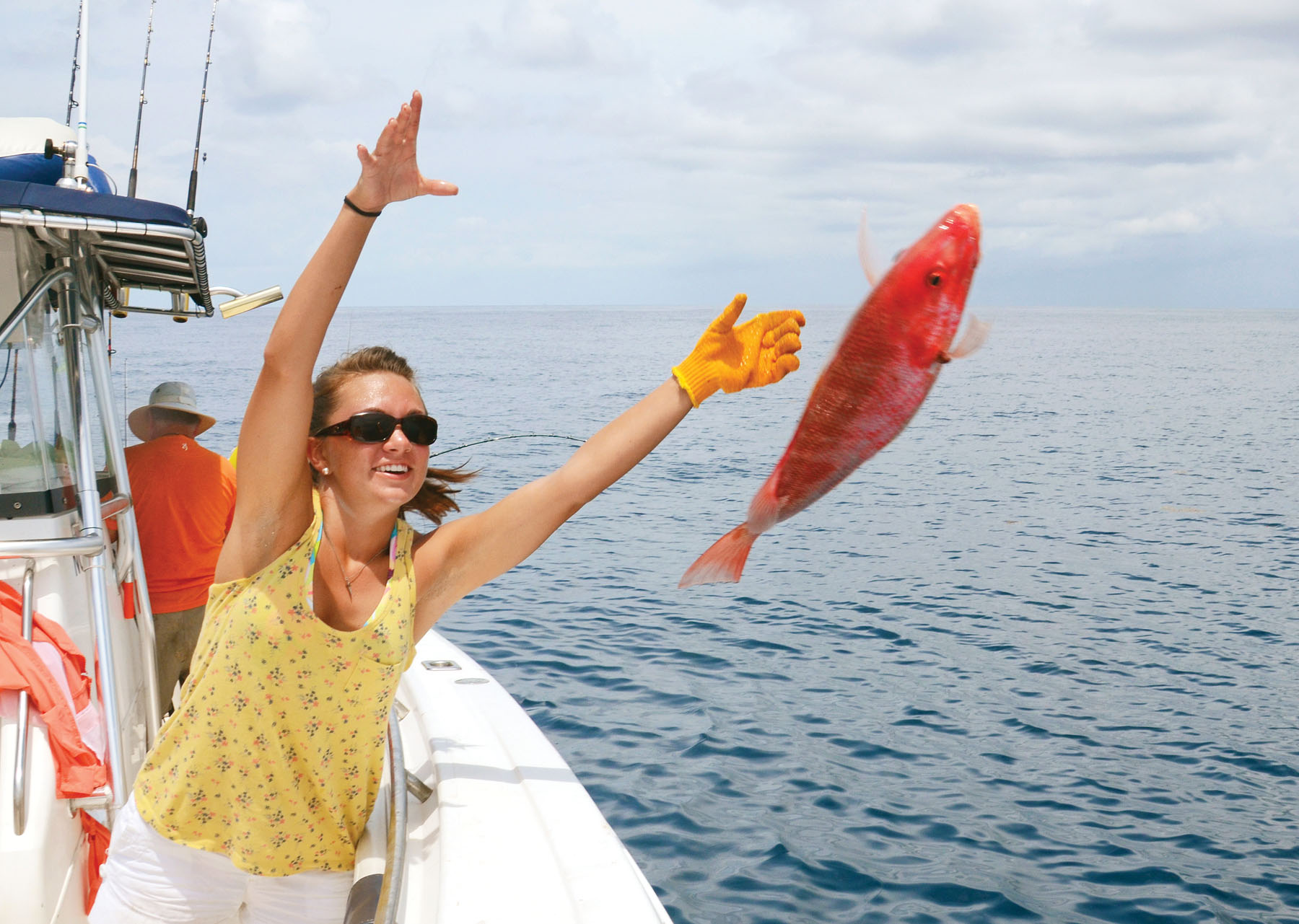 Sara Douga lets a “sow” snapper fly, on its way back to the water. Most fish are released downwards for efficiency, but we were having fun with this fish.

Two summers ago we returned from 70 miles offshore with a completely empty ice chest. Why? Wed thrown back everything we caught: Snapper up to 18 pounds, a bunch of kings up to 35 pounds, and a ling or two. It turns out snapper season was closed, we only wanted kingfish in the 50-pound range for a certain, summer-long tournament, and our ling that day were undersized. Didn't see any amberjack or grouper.

With an empty box but many photos, we returned home after burning lots of fuel. Rice and beans for dinner, as they say, after a strictly catch-and-release day offshore. That happens to bluewater trollers all the time, but rock and rig fishing in 100 feet of water off Port Arthur? That's rare, very rare.

Releasing fish offshore in a skillful manner takes practice, but anglers are obligated to do so these days, to keep fishing in the face of closed seasons, short bag limits and significant size limits.

Most offshore anglers keep whatever is legal out there, if its halfway decent to eat. Even spadefish and the now-restricted triggerfish. And then you have more top-shelf fish that can be released, decided by law or conscience. For instance, a three-pound tripletail might be legal, but has small fillets. If released, it could grow to 35 pounds.

A barely-legal ling is another dilemma, though its fillets are more generous. However, if ling can reach 135 pounds, why keep a 15-pounder? They're great to eat, but the average size and numbers of ling have dropped hugely since I started fishing off the Texas coast. Catching a 30- or 40-pounder today is something to crow about in the online forums, or win a tournament division.

Earlier this summer I racked up nine ling, but released seven. Most were undersized but some exceeded 20 pounds, and its nice to know they're likely prowling offshore right now, probably hook-shy until next year. Some of those released ling carried more meat than a limit of trout, but Id already kept one for the freezer in May. Earning good ling karma didn't help us win the ling pot in a July tournament, however. I set the hook a little late (to be extra sure), but a 40-pounder that would have paid for our expenses somehow spit the hook and was lost...

When a ling is finally tired, its fairly easy to tail them into the boat, while lifting on the hook from the other end. From a boat with low sides, anyway. Smaller ling can be derricked into the boat, or dipped with a sturdy landing net. Nets offshore look odd but have their uses... from landing fish soon released, to retrieving floating items (like a pack of cigs thrown to a needful shrimpboat crew) or the odd snapper floating nearby that wasn't fully deflated when released.

Kingfish are more difficult to release in fighting shape. You have to work fast, because they don't live long out of water. Tail them like a salmon into the boat, unhook the fish with long needlenose pliers, avoid sharp teeth and maybe flailing treble hooks, pick it up and drop it straight down so that gravity carries it forward through water for as long as possible. If you've taken too long, the king will slew sideways about eight feet down and begins to sink. If he doesn't kick into gear and get water flowing over his gills, he will likely sink to the bottom. Gaff-and-release isn't an option here, if you have a conscience. Years ago I watched one crew gaffing small kings off Sabine. They held each fish over the water until it stopped moving, and then gingerly unhooked each fish like they were rattlesnakes. Then they shook each king off the gaff, watching every one sink as shark food. They were either rookies, or didn't care about the resource.

Some offshore guys have argued that all released kingfish are dead, but my boat crews know better. We tagged and released 200 kings in 1985 and 87, with interesting recaptures in faraway lands, proof many of those fish survived. Tagging a king actually adds time in the boat, when every second counts against this fish. Half of our tagged kings wore federal belly tags, (involving tedious work with a sterilized scalpel), while the other half swam off with easier-to-install shoulder darts. My farthest recapture was a king that swam from Galveston to Cape Canaveral in the Atlantic. That's a long swim for a dead fish.

Bigger kings are a precious item these days, increasingly rare. Releasing them is difficult, because of their size. The majority of bigger kings are kept for trophy pictures, even though the meat is dark and too laden with methyl-mercury for advisable consumption. There is no reason to keep a kingfish bigger than 20-25 pounds, unless its the only fish of the day and people are really hungry for fresh fish. Meanwhile a bigger king of 40-plus pounds is worth big bucks in a tournament. Its a long and hazardous road of 14 years or so, for a king to reach tournament-winning size. As for smaller kings, health advisories say that 14 pounds or so is the cut-off for healthy consumption. Pinching down hook barbs or using single hooks makes it easier for all concerned.

Red snapper are easily dealt with, though catching and releasing them in really deep water is problematic. This summer we caught dozens of snapper from 10 to 18 pounds, and in the boat you could see the pressure change swell them up within 10 seconds or so. On our best day the depth was 135 feet, but we weren't even fishing on bottom, the Slapper Jigs were taking them halfway down. Digging out the double hooks was often a chore, and stout needlenose pliers a prized item that day. Snapper are patient enough in the boat, but the air pressure builds rapidly inside them. This can damage them, so I poke the deflator tool in their side, let the air out, and the unhooking begins. Unfortunately, this invigorates snapper on deck and they're likely to flop more, while being unhooked. That day we caught 45 and kept our eight-angler limit of 16 fish. All other snapper except one swam rapidly back down. We had one floater and retrieved it with the net. Instead of training seven people that day with the deflator, I ran around deck and did all the fish, whether they went in the cooler or not. (A deflated snapper takes up less room on ice).

Though I was super-busy when I wasn't bowed up with my own snapper, we had several cameras going, thank goodness. Pete Churton from Beaumont got the picture of TP&W intern Sara Douga releasing snapper, and Shannon Tompkins from the Houston Chronicle shot many photos that day, including a perfect side-pic of a sow snapper that seemed to hover in mid-air before splashing down. See you later boys, cant say it was fun.

Releasing snapper from 200 feet or so is far more dubious, with the gas inside them expanding by a factor of six. That deeper water is where bigger female snapper spawn, and the 25-pounders out there carry millions of eggs, far more than smaller snapper. I was relieved when the CCA finally stopped the snapper division of their tournament, because knowledgeable anglers were actively targeting giant female snapper in deep water. Where releasing them wasn't really an option.

Ditto for deepwater groupers and tilefish. Catch them in their usual depths of 600 to 900 feet, and they're toast when they break the surface, floating like buoys. You might see one quiver, but their eyes are bugged outwith scales ruptured and sometimes sizzling. This is not a catch-and-release fishery.

Virtually all Texas tarpon offshore are released, since its illegal to bring one home without an expensive kill tag. The offshore tarpon guys are quite good at releasing their fish, and these days most of them know better than to drag one into the boat for a hero picture. Tarpon are rare and precious enough to warrant extra care in reviving them, accomplished by easing the boat along and dragging the fish alongside until he kicks away.

Sharks are meaner and tougher, unless dragged up on a dry beach. In the boat we grab the leader and cut it as close to the shark as we dare. Its a shame to leave a stainless hook (they should be illegal) in a released fish. We generally catch our sharks by accident while snapper fishing, or with circle hooks while tarpon fishing. Its a shame to leave a thick circle hook in a shark, but with the cost of health care today, repairing a mangled hand is expensive. I got away with it many times, often while talking to the shark like Steve Irwin did with his dangerous critters. But the late Capt. Howard Horton of Galveston had three fingers sort of... removed one night by a small but gaffed blacktip shark. He was trying to save a 30-cent circle hook from its jaw. Doctors rebuilt his hand and morphine eased the pain, during his week in a Galveston hospital.

Pelagic fish: Releasing blackfin tuna, after the boat crew has caught their share, isnt difficult. They're as easy to handle as a bonito, though bigger. Simply pop the hook out and toss them overboard quickly. Small wahoo can be released, since they're really no different from kingfish. However, since they taste like turkey breast, its a rare sight to see wahoo released. Really small wahoo are caught around sargassum weed patches, and should be thrown back. Why keep a three-pound wahoo, when it can grow to 135 pounds? Same with dolphin. Keep a few small ones, but remember a two-pound dolphin with thin fillets in June can weigh four pounds by August. They're the oceans fastest-growing fish. A jumpy little pipsqueak dolphin can reach 50-pound trophy size in just four years.

Years ago we were often reminded that fish tossed overboard dont always disappear forever. We had lots of interesting tag recaptures while fishing the Texas coast. For instance, a Spanish mackerel that soon wintered in the Yucatan. Our ling were caught again in all five Gulf States. A sand trout released 20 miles offshore was recaptured in a Louisiana tidal creek...

And the two weirdest cases: A person I knew in Mobile, AL caught one of my Galveston-released kings. And then Bill Ferguson, one of my tourney crew, recaptured one of our tagged kings a year later about 15 miles from the original site, during a tournament, that helped win second or third place. As they say, What goes around comes around. Fish tagging is absolute proof that catch-and-release fishing works.