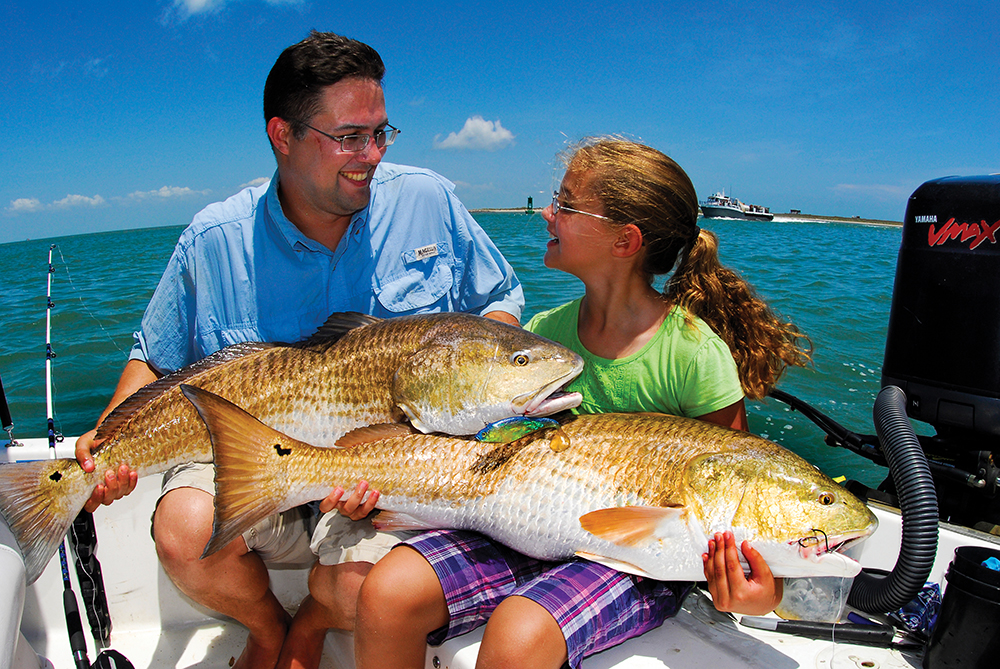 Double-header on bull redfish, about to be released off Port O’Connor.

A former classmate from Port Arthur High School way back when has racked up  impressive catches of bull redfish and big jack crevalle—both species that school up around Labor Day and sometimes into October. Though I later relocated to Port O’Connor, it turns out we both like to run up the score on these fish on the upper and middle Texas coast. Most people are happy to catch even one of these fish in a day, but not us.

My best totals hardly compare with Mike Spencer’s, who has seen stellar (some would say punishing) days just off the upper Texas coast. He and his crew launch from the beach in aluminum boats, many miles from any boat ramp, and fish within sight of their vehicle. They narrow their search from a pickup truck. It’s roll down the window and let out a little AC, check the horizon with binoculars, then ease along for another mile. When they can see water exploding offshore, it’s time to launch the boat. The schools of bull redfish out there, and fast-moving jacks, often hold thousands of fish.

“Here’s how we caught so many,” says Spence. “The water was really green along the beach one Labor Day weekend and it stayed very calm. Lots of pogies and mullet out there. There were dozens of large schools of jacks cruising back and forth on the surface from a quarter-mile to one mile off the beach. In two and a half days we caught 83 jacks, some big bull reds, and only a few big blacktip sharks. The absence of sharks helped.”

Spence knows that aluminum boats are light compared to fiberglass, and can be manhandled when launching. When returning, they run up on the beach in wave chops. “You need a manual tilt on the motor when you hit that sand, because a power tilt is too slow. They use 25-horse outboards. His stories make me miss the good old days, when we launched small jonboats with 9.5 horse outboards from Sabine to High Island on Hwy. 87, which was later erased by hurricanes.

“The day we caught 133 bull reds was on a Labor Day Saturday,” says Spencer.  “We found a very large area of pogies (menhaden) a mile off the beach. The reds had circled the pogies into a bait ball about 300 yards across.  And they just circled and fed all day. We would drift across the school in a large aluminum boat with four guys, constantly hooked up. We took two breaks and went back to the beach to eat. But we stayed at it for seven hours. All fish were caught on circle hooks. We would pick them up by the heavy leader, unhook and release. And all fish swam off.

“Now this is critical: In sandy water we throw hair jigs and reel steadily, so these fish can find the jig. In green or clear water we use the drone spoons reeled fast. The reds, and especially the jacks can out-run jigs. They see it’s not an actual fish, and they just follow it to the boat without hitting. The fast spoons are so erratic and flashy they really can’t identify it and hit it before their schoolmates can grab it.

“We use heavier tackle and that makes it easier to catch and release. Like five-foot, six-inch stand-up boat rods with Shimano TLD 15 reels with 40-pound line. Baited with live or dead pogies. We sometimes use 2-ounce egg weights with balloons, to present the baits at different depths. Then we use 7-foot casting rods with the Shimano 200GT size reels with 30-pound line. Everyone wears a rod belt. The heavier gear allows us to handle the jacks, bull reds and the 30- to 125-pound blacktips that hang around these bait schools. We use 7/0 circle hooks and five feet of 125 mono leader. No wire. This allows us to land and release a jack or red fairly quickly, depending on the size of the fisherman. The sharks rarely cut off because they’re hooked in the corner of the mouth. We never bring sharks in the boat, just cut the leader. I did have a blacktip shark turn and bite my knife blade twice, while trying to cut the shark free.

“Our redfish in those schools were in the 20- 25-pound range.  We did catch one that weighed 42 pounds. That was our biggest redfish ever. Our second best day on bull reds was 72 fish. And third best is 42. All were in schools of reds working off the beach in calm weather,” Spence said.

One hundred and forty miles to the southwest, my buddies and I were fishing around Port O’Connor. We didn’t get acres of bull reds offshore, but the big bruisers use Pass Cavallo when decent water is running through. We could anchor in calm water, even spend the night there when we were mad at the fish, and used four and sometimes five sturdy rods. We always hoped for a tarpon, but more often battled bull reds, jacks, and blacktip sharks, which could be hooked only 15 feet down, very close to the boat. On 40- or 50-pound line, they’d only peel off maybe 20 yards of drag and sometimes not even that. I used at least 200-pound Ande leader and big circle hooks and whatever baitfish we could scare up with a castnet. A bucket of shrimpboat cull from a POC bait dock worked, too. Some days the big fish were stacked up but we couldn’t find enough bait.

This happened when I had a dad (who owned two Dairy Queens), who brought his 16-year old son and a schoolmate, and the teens caught almost every redfish that day. Mullet were scarce at the nearby beach and I only caught a dozen medium-sized. We had to scrounge for every scrap of used bait, but were still able to put 46 bull reds in the boat without moving. There was plenty of time to catch more bait that day, but those teenagers were done, finito. Spoiled for life on redfish.

I later punished another charter—this time we’d been offshore all day catching limits of snapper and kingfish. It was a calm day, so we stopped at Pass Cavallo on the way back, anchored and put 31 bull reds in the boat. My lower back almost gave out, picking those big fish off the deck and tossing them overboard. That charter needed Advil and a strong drink to wash away the pain.

Often, we’d catch 20 bull reds both day or night, and quit when we reached that round number. Sometimes on very quiet nights, we could hear big reds drumming under the boat—there may have been thousands down there. They grabbed any bait that touched bottom. If we dropped a bait down, the big rod often doubled over before we could set it in the rod holder. Or, a rod bent so far over we couldn’t wrench it out of the rod holder. There was no point in baiting up more than one or two rods, because multiple hookups would turn into a mess; all hooked fish stayed behind the boat’s stern if there was tidal current.

In contrast, jackfish seem to be strictly daytime feeders. In October they start leaving Matagorda Bay, hordes of 20-pounders grabbing our baits. I started using 8-foot leaders of 250-pound test, and if a jack hit close to the boat, I’d pull hard, grab the leader with gloves and wrap it fast around a boat cleat. If I missed the quick wrap, that jack was off to the races. If I did make the wrap, the fish went crazy on a short leash but never could break the leader. That’s one way to rack up 29 jacks in one day. Our Penn 4/0 reels filled with 40-pound line took a lot of punishment.

Since then I’ve found bull reds to be more sporty when hooked on bigger spin reels with 25-pound line, mounted on stiff (no wimpy tip) seven foot rods. You can pull hard, but the fish has a chance to show his stuff as long as the current is slow.

Both big species can even be caught on 12-pound trout tackle, but with jacks, that usually means following a hooked fish with the boat. And it takes time, at least a half-hour depending on the angler. Bull reds aren’t quite that tough. We recently landed a 44-inch bull red from a jonboat while anchored in five feet of water. The angler lady was new at pulling on big fish and had two guys standing over her offering tons of advice. She finally yelled “Shut up!” and we all settled down. Eventually I grabbed the 20-pound leader, eased the tired fish close, then tailed it aboard. After a few pictures her trophy redfish floated belly-up, but then righted itself and swam away.