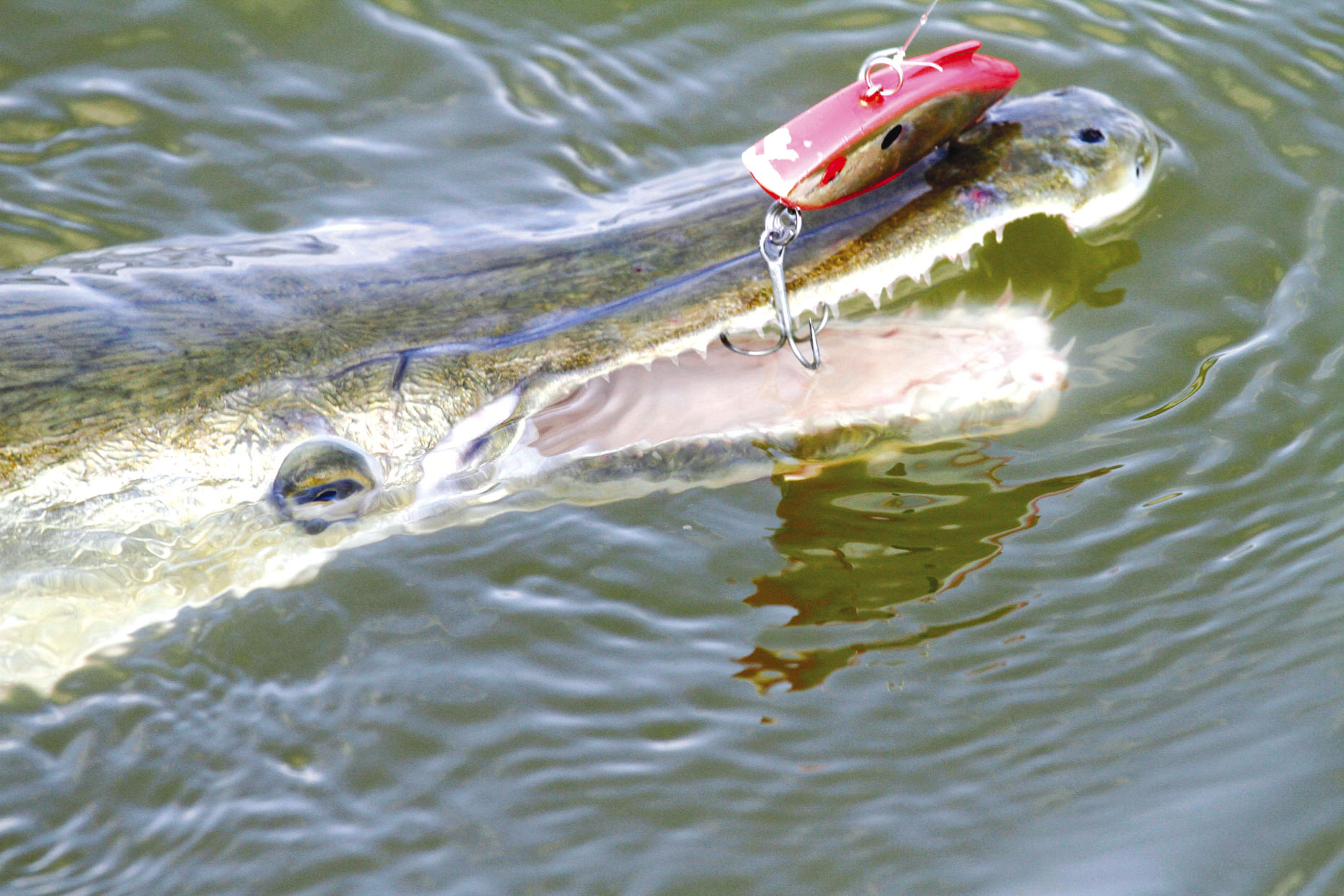 Shannon Tompkins caught this alligator gar on a Rat-L-Trap.
In my youth I whaled away on many an alligator gar, since they were numerous and pests on the upper Texas coast if you were a bait fisherman. Eventually we became pretty good at catching gar and sold the big ones for a nickel a pound, which doesn't sound possible today, but then gasoline and other items were cheap as well. Catching that first big gar became a quest, after moving from the cruel environs of Lubbock down to Port Arthur, following the 8th grade, and suddenly finding myself in serious gar country, since Texas/ Louisiana remains the world's population center for this fish.

Getting primed for the 9th grade that summer (or not), I was shocked to see ponderous, olive-green monsters prowling the ICW near my house, cruising by with indifference. In the distance, feisty huge ones smacked their tails like beaver, loud enough to be heard a quarter mile away on a calm day. While casting jigs from the Port Arthur drawbridge at schooling ladyfish each afternoon, I could often see big gar lurking below.

At the drawbridge I soon rigged up a dead 6-inch mullet on the spin rod, and actually sight-cast to a hulking brute lazing on a late-summer's outgoing tide. He snapped it up without a second thought, and a long and savage fight ensued, the spin rod bent to the butt. I fought him like a pro, not like some potlicker from Lubbock. Passing cars stopped and a small crowd gathered; they had to see the finale. Shouts of encouragement around my ears went ignored. I was ready for the winner's circle, well prepared, even had 200-pound mono leader. I finally coaxed the huge fish into shallow water. A motorist climbed down the steep bank, waded in, grabbed the 4-foot leader and, mindful of wicked teeth and serious attitude, towed the thrashing gar shoreward. Whereupon the hook came untiedFor a moment nothing happened, then this huge fish, realizing it was free, turned around with some dignity, and headed back into the deep. Behind me there was this awful chorus of groans and a scattering of sighs. My victory was denied, I'd gone from champ to chump, and the crowd soon drove away. It seems my knot-tying skills needed improvement.

Sight-casting to tarpon-sized gar was cool, but the drawbridge burned soon after in November, 1967. But there were gar everywhere in Port Arthur's tidal waters, including Pleasure Island, where we had the run of the place for the next three years, while they built the towering bridge that stands today. (At the same time, Brown and Root was building the two big silt-retaining levies north and south of the marina that people drive on and fish from today, which I will recount at another time.)
Anyway, with better equipment, we were soon catching and even selling 50- to 70-pound gar, and releasing hundreds of lesser size. There were so many out there, you might catch 15 gar on live mullet, while waiting for that first redfish. We sold the biggest gar around town, even tried the big pool hall on Houston Avenue, where at the time it was surmised that no white man had ever trod. The place inside was lit only with black lights, and all you could see in there were white shirts, grinning teeth and blacklight posters of Jemi Hendrix and the like. Nobody in there wanted our gar, that lay patiently in the pickup truck, but we soon found a buyer a few blocks north on Seventh Street.

While firmly entrenched on Pleasure Island with an old Plymouth Belvedere station wagon, no fish and game limits, or seasons, I devised a means of catching the big gar that were always rolling and gulping air. I'd read about jug-lining for catfish up north, so I built a jug line that kept the mullet bait well above bottom, away from big blue crabs that were a complete pest in those days. Baited it up at sunset, and set out the jug. Next morning, that jug was gone from the boat basin. I drove to the seawall, scanned Sabine Lake with binoculars and there it was, a white gallon jug plowing along partially submerged, about 400 yards out. Back at the marina I untied the jonboat and gave chase, eventually subduing a thrashing five-footer. Towed it back to the shell boat ramp that sat right in front of today's Salt Club building. Got out and pulled it right up on the ramp; I'd used a stout line. That's when Willie the marina master came running out of the house, a long-barreled .22 Magnum pistol in his hand. I backed off pretty quick while Willie emptied the pistol from 20 feet away, bits of oyster shell exploding around the gar which took hits, but kept snapping and thrashing. Lucky there were no ricochets reported; downtown Port Arthur was across the ICW maybe 400 yards away. Finally the heavy-scaled beast lay still and was carted off to Judice Groceryagain for a paltry amount, a few pieces of silver.

Such adventures were fun in my youth, but as we've suspected for decades and found out more recently, the alligator gar is in trouble. Throughout its range, as it turns out. Like any other fish in the world it can be overharvested, and gar in Texas had no real protection until 2009. Just as bad, it takes about 14 years for a female gar to mature enough to lay eggs. Another negative factor: gar prefer floodwaters and shallows to spawn, and floods are discouraged by any means, these days. And that's if it even rains; drought years are said to halt spawning efforts, because gar won't lay eggs in low, muddy water. Add millions of new fishermen and hungry mouths (it's a tasty fish, depending on who you talk to) and the gar has major problems dodging hooks and arrows long enough to reach spawning size. At least gillnets and beach seining were curtailed in the early 1980s, which helped the gar.

And yes, we ran into big gar while pulling beach seines; it seems that alligator gar don't mind the Gulf, or prowling past dog-paddling tourists in Galveston, who have no clue that a prehistoric "monster" is among them. Back in the day, if a five-footer slammed into our mesh during a beach seine party, with a bunch of gals helping us out, and everyone waist- to neck-deep in breaking surf, our merriment turned to anxiety, at a powerful but unseen intruder yanking the net around, only feet away. Usually it was a big gar with a wicked smile that could be towed ashore, untangled and pushed back into the surf. These encounters weren't accidents; in more recent years I photographed big but dead gar at Surfside beach near Freeport, victims of red tide.

Catching and selling a few gar, back when they were a nuisance, is one thing. But knowing what we do today about this fish, I can't understand people who target the biggest female gar during spawning season, and shoot them with arrows. Posing for pictures with a giant, 40- or 50-year old female gar seems questionable these days. The gar is ancient (100 million years) and very tough, but shooting and releasing them is problematic even for this fish. Catch and release probably doesn't hurt them much.
Like primitive tarpon, gar can rise and gulp air from the surface, when dissolved oxygen levels are too low in the water. If an oxbow lake almost dries up, for instance, gar can live in the mud until the next blessed rain arrives. A fish that tough would be happy with salty bay water, very happy.

Alligator gar are mostly homebodies in freshwater, and a number of them up to seven feet long have been tagged with external radio transmitters in the Trinity River, where big ones still lurk and prowl. But not far, apparently. It's easy to fish out a favorite river gar hole, and a number of reliable spots today are empty, where big ones used to bite. I suspect that single gar cruising along the beach, or in major bays, tend to move around a lot more. But if memory serves, TP&W hasn't made an effort to tag gar in coastal waters. One more mystery: coastal alligator gar wanderings.

The current world-record alligator gar was mounted in 2011 by New Wave Taxidermy in Stuart, Florida, where Mike Kirkhart and family has been doing great work for decades on many species of fish. He still has the mold, for those who need an alligator gar eight feet, six inches long, with a reported girth of four feet, hanging in their pool room. If so, look up Mike's web site. That mind-blowing gar came from Mississippi and Mike's family says it was still full of eggs, on arrival. And an estimated 50 to 70 years old.

Gar have been vilified for generations, accused of eating prime gamefish, but their diet consists mostly of gizzard shad and other lowly items on the food chain. Heck, I've had them snatch blue crabs right off our lines. Back when gar and crab were a hinderance to catching bay redfish.