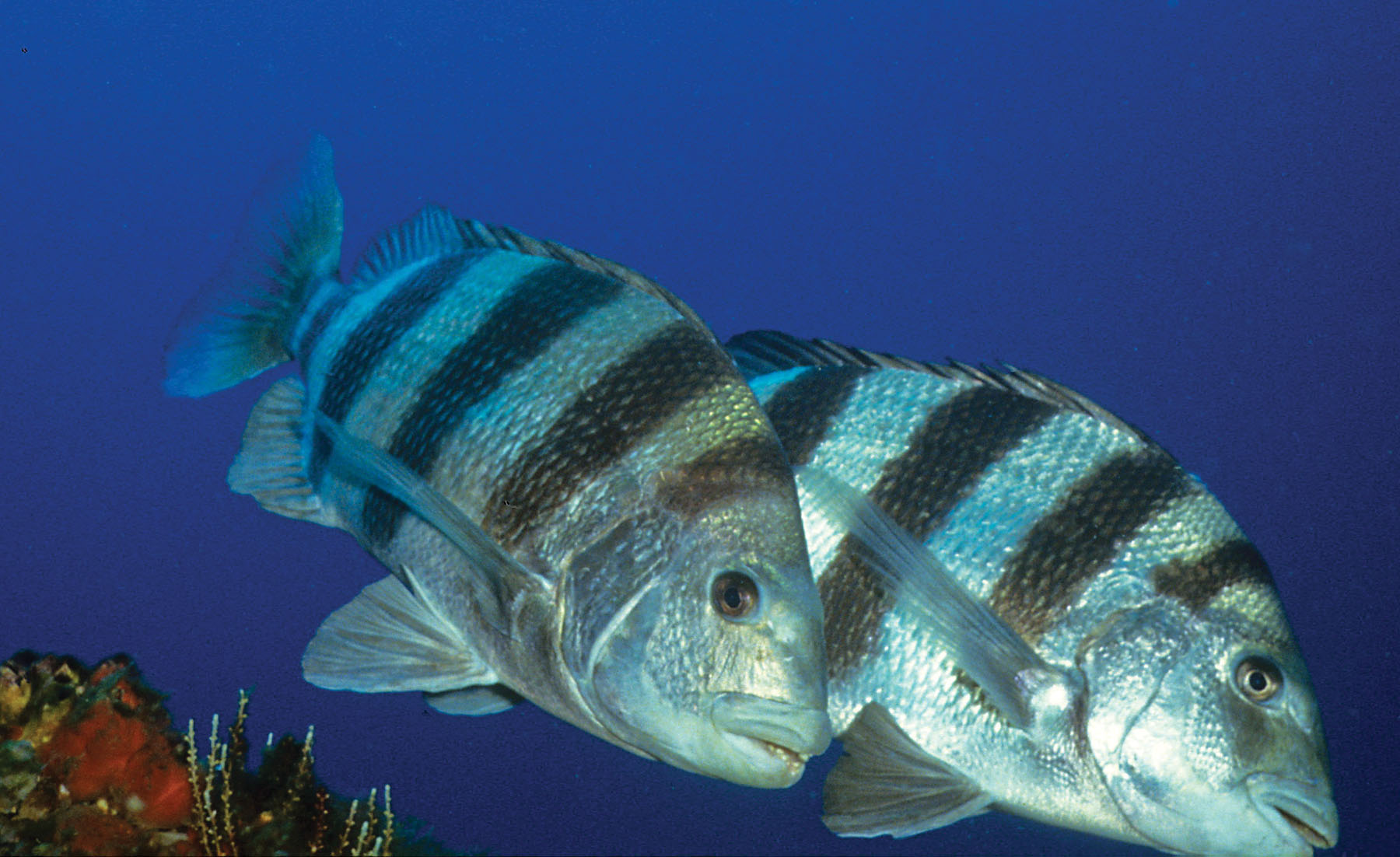 A pair of fatties in 90 feet of water off Port O’Connor. They’re nibbling on marine growth that coats underwater structure at offshore platforms.

Life is full of odd surprises and my first sheepshead, as a lad of 15 years, was no exception. Caught on a chilly December morning in Port Arthur's Pleasure Island Marina, both angler and fish were equally startled.

I'd set out several hand-lines made with 100-yard spools of 12-pound Shakespeare line. (My Zebco 404 outfit was lost the month before, snatched off the seawall, and a replacement was slow to arrive-maybe by Christmas. My primitive handline rigs, used around the world even today, had landed a dozen redfish in the previous month.

Anyway, I set the hook into something ponderous that sprinted for the pilings and docked sailboats across the canal, trying to cut me off. I barely stopped it without breaking line. It was give and take, stronger than any redfish so far, but I managed to coax it back with cold hands. My "redfish" soon materialized into a boxy fish with faint stripes and odd teeth-another WTF moment in life.

Old man Smiley, the Marina Master, came running out with a crab net and we somehow dipped out my first sheepshead, weighing six pounds, four ounces. For me it was a non-redfish but a new species to add to my list. For the old Cajun and his wife, it was a culinary prize since they ate all sorts of marsh critters, assorted seafood, even scrap ducks that dove along the outer seawall (sprinkled with a load of 8-shot). That big fish would make a fine dinner; sheepshead aren't called "barnacle snappers" for nothing, feeding exclusively on shellfish.

Since that day, my respect for the toothy sheepshead remains. Winters can be bleak for anglers on the Texas/Louisiana border but one can often count on catching a box of sheepshead when cabin fever strikes.

The best weather is warm and foggy, with a green incoming tide- which suits most coastal gamefish. If a norther is blowing on a Saturday (imagine that), even with a cheerful blue sky, the water is often low and muddy; best stay home. During better weather keep in mind that frozen shrimp works fine, if live shrimp are hard to find. We weren't into digging in the marsh for fiddler crabs still hibernating, but if a small local shrimpboat was working nearby in the Gulf, we hustled out there in the jonboat and asked for a couple of pounds of shrimp. Sometimes they only had tougher rock shrimp, but sheepshead are crazy for that.

My favorite technique, developed during jetty days, involves "flipping" out a home-made, 3/8 ounce bucktail jig (or a bare jighead) tipped with half a shrimp, a dozen feet from the rocks, letting it hit a rock down below. We use baitcasting reels with tough, 20-pound mono line such as Ande, a hard line that won't cut easily---so no leader is necessary. Dropping straight down 20 feet under the boat also worked, if the current was light. Catching them on lighter spin tackle is more fun, but bumping a rock means a broken line. Sheepshead can smell and grab jigs quickly. Each time a fighting fish loses its shrimp, another fish grabs it. This means sheepshead are easy to chum: A weighted mesh bag full of fresh shrimpheads, mashed under a boot heel, weighted on the bottom, is a loud dinnerbell for these fish.

Our best chumming feats were at the platforms just offshore, where pilings are covered with big barnacles. A handy baseball bat, paddle, gaff, hammer, anything that will knock those barnacles loose, often results in a small swarm of sheepshead in the "chum" within minutes. These "bay snapper" dearly love fresh barnacle meat, which is said to taste like oyster. Drop a jig into the chum area, stop at about 15 feet, and wait for a tap-tap. It doesn't take long.

The Sabine jetties on the Louisiana border are isolated, quite long, with no chance of foot traffic, so the sheepshead population is certainly healthy there. The opposite would be Port Aransas, which has a short set of jetties easily covered by daily foot traffic. And a population of winter Texans from places like Iowa, who have become quite skilled during the past 20 years, at snatching sheepshead for their next meal…They clamber around those big granite rocks, up to 90 years old, serious as a heart attack, with collapsible canepoles and small containers of live fiddler crabs. No sheepshead is safe there.

For boaters along the central Texas coast, Port O'Connor offers a tall, walkable set of jetties, though almost everyone anchors and lowers baits. As a fishing guide, I took many inexperienced anglers out there, who were not great casters. But if didn't matter; we dropped straight down for sheepshead and had our way with them. We used 2-ounce drop weights, shaped like the common snapper weights offshore. Forty-pound mono leader worked best with a small number 1 or 2 J-hook. The lead weight more often than not could be unsnagged from rocks below, as compared to our dismal record with egg weights. Using this technique, we caught many hundreds of sheepshead. Everybody saw action, wives and kids included, using 20-pound tackle. Live shrimp did the trick as bait. I encouraged everyone to release sheepshead of less than four pounds and often by day's end, we still had a dozen "fatties" to fillet on the table, from four to six pounds. I used to tell my crew if they couldn't catch their limit of five legal sheepshead at POC's jetties, they should be beaten like a three-legged mule on the road to Perdition. So maybe they fished harder than most.

It should be noted that sheepshead, like tripletail, have little meat compared to their body mass, making a 2-pounder hardly worth keeping. Although I have seen them that size, baked whole in a Chinese restaurant in Houston, coated with pink, sweet-and-sour sauce. On every table during a private banquet.

Our biggest sheepshead ever was caught lurking at the POC jetty, but on the bay side, in flat water protected from offshore winds. We were fishing chunks of blue crab in early March for black drum. Terry Webb of Austin found a whole, live softshell blue crab in our bucket, a rare treat. Instead of pinning it to a huge circle hook on a big drum rod, for some reason it was attached to a small j-hook and dropped down 20 feet. It was pure luck using the right hook: Something tap-tapped and moved off, and we got ready for an epic battle with a 30-pound drum on lighter tackle. Terry screamed and set the hook, but a sheepshead soon came up, weighing 10 pounds, 10 ounces. He never would have caught that fish with a 16/0 circle hook meant for drum. It must have gone crazy on the softshell crab, even swallowing the hook.

Oversized bait for a trophy sheepshead: Anyone targeting the winner in a sheepshead tournament, whether the STAR or a winter tournament, should consider using bigger baits.

Sheepshead don't get a lot of respect in Texas but that may be changing soon. The first serious winter sheepshead tournament for the public has been scheduled for February 25, 2012, out of Port O'Connor, called the Barnacle Bandit Blowout. Several guides are helping out, but Capt. Curtiss Cash is the tournament director and can be contacted at 361-564-7032. He's been rounding up prizes and local marina and motel support, who should be eager to assist during the year's slowest month on the coast. In February the summer crowds are but a dream; the only thing going on that month is the CCA crabtrap cleanup, or serious waders stalking trophy trout. A sheepshead tournament is perhaps more family-oriented.

If a tournament in the dead of winter raises eyebrows, consider that sheepshead are at their hungriest in Feb./March during their spawning rituals. The same holds true all along the IH-10 corridor all the way to Jacksonville, Florida, where this February they're holding their 12th Annual sheepshead tourney called the El Cheapo.

Last winter they had 366 boat entries for that one-day event, with around 1,000 anglers signing up from far and near. First place prize was a $13K Carolina Skiff, and a smaller boat for second place. There is, of course, a fish fry for the crowd, and I've seen video of the poor volunteers filleting these fish at a fast pace. With that many boats, it takes a nine or 10-pounder to win, and their tournament record is 12.9 pounds. Contestants have to be prepared for fog, cold, wind or rain. Or even a sunny day. Texans, on the other hand, should be prepared for anything, because the weather can drop 40 degrees in one hour.

The nice thing about the Jax tournament is even jonboats fish it; in windy weather they stick to sheltered boat canals, bridges and deeper harbors. Most contestants anchor at the fairly short Mayport jetties. Their early entry fee is only $60 bucks and for that and a couple gallons of fuel, a lot of people take a shot at winning a new boat.

Port O'Connor is more exposed to winter weather, but their jetties usually offer protected water somewhere, after boaters safely cross Matagorda Bay, and the rocks are home to a host of sheepshead. If you decide to turn out, wear a big jacket, knit cap and remember the rule of the three-legged mule…