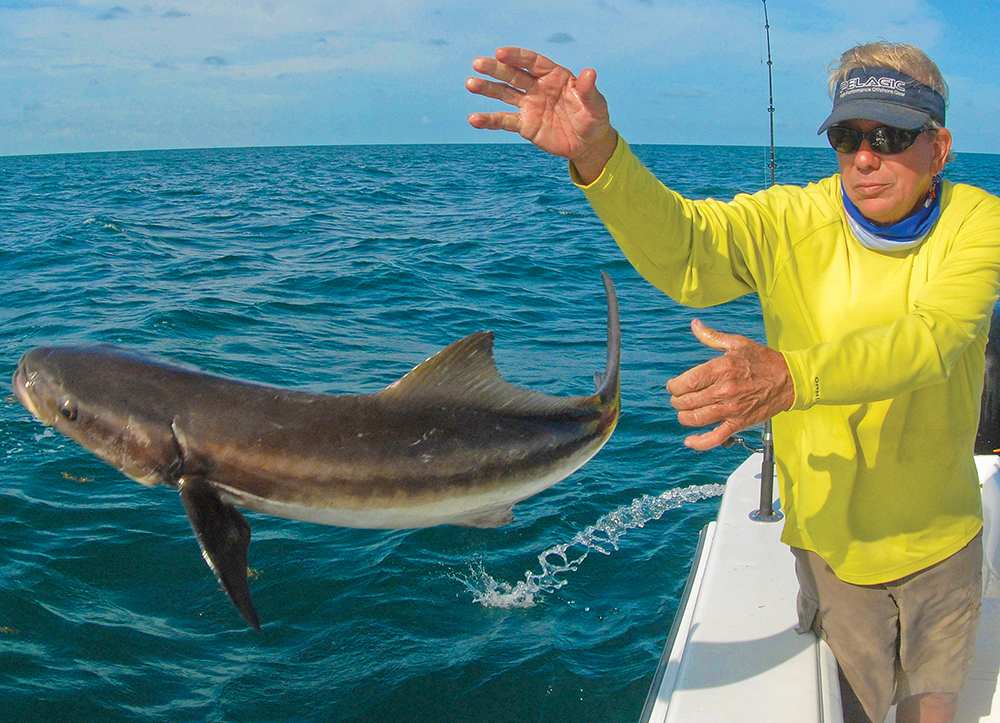 Running the rigs and shrimpboats is a sure way to find ling during summer. This one was released.

A great many bay boats will be running offshore this month, as June’s wind subsides. In recent summers these low-sided craft are often seen tied up to offshore platforms, bobbing up and down while each crew hauls in snapper and various other fish. Many of these small vessels stay within sight of land, though not all. I’ve seen what I call “trout boats” 20 miles offshore, sometimes with only one angler. Small craft for sure.

“Small craft” being relative here; back in the day, we fished the Gulf in cringe-worthy bass boats with stick steering, and later with 15-foot bow-riders. (Mine was called Old Yellow; it had a faithful Johnson 70 outboard, and returned with many snapper and ling, even goliath grouper when they were legal). When a friend’s dad finally bought a V-20 Wellcraft, it was the biggest boat we’d ever fished on, except for partyboats. With that Wellcraft, and later a huge 22-foot AquaSport, we were often 30 miles offshore, sometimes putting in 15-hour days from Port Arthur—visiting areas like Oil City off Cameron, Louisiana where something like 90 oil rigs could be fished. And you might see two other boats on a Saturday.

Today’s modern boats, even in the bays, are bigger and faster, with far more reliable horsepower, fuel systems and electronics than we ever dreamed of. Okay, maybe the fuel isn’t so good. To remedy that, I’ve kicked the ethanol habit and only seek out gas stations offering non-ethanol fuel. “Just say no to ethanol.” Sounds like a good bumper sticker...Anyway, when perfect offshore weather beckons, it’s entirely possible to fish deeper, cleaner water offshore. That’s a good thing, especially on days when the bays offer sluggish tides.

The following is an itinerary of sorts, for what I would call an ideal day offshore in a smaller boat.

1. Prep the boat, because you never know what the day will bring. Is everything working? Are life jackets and rain ponchos stowed aboard? Re-check the weather forecast before leaving the coast, and hopefully someone’s phone service, while offshore, will show current coastal radar and any storms forming up. You don’t want to be caught by a super-cell sneaking up from inland. Surviving fighter pilots of World War II were coached never to force a bad situation, if they wanted their careers to continue. The equivalent here would be fishermen heading offshore with a terrible weather forecast, like a major storm front predicted that afternoon. There’s just no future in it.

2. With a good weather forecast, start early and load up on quality fuel, ice, Gator-Aid, and water, while passing on beverages that might impair judgment, timing and common sense. Bring food with potassium, an electrolyte that combats the day’s heat. Eat a banana on the way to the boat ramp. They’re not really bad luck, but inside you they’re harmless enough and will fight muscle cramps and regulate blood pressure. I personally know of three boat captains who have collapsed and gone to the hospital during hot summer weather offshore, because their potassium levels were too low and they didn’t drink enough water.

3. There’s nothing quite like making the dawn patrol, breaking the jetties with a calm Gulf ahead, coffee and a thick breakfast taco close at hand. And not too much Crown, the night before, right? First assignment is finding shrimpboats offshore. Why first? These commercial boats drag their nets at night, and then anchor at first light to sort through their piles of bycatch. Instead of deckhands squatting on the stern and picking through piles of writhing sea life, like they did for generations, their toils are more efficient these days. They now carry a brine tank, and can dump the entire catch into these tanks, killing everything. The shrimp sink and everything else floats, easily skimmed off and heaved overboard. These big boats now carry stacks of 50-pound bags of rock salt for their brine tanks. The empty plastic bags are thrown overboard, along with bleach bottles (for bleaching shrimp) and both items float away to Texas beaches. But I digress.

4. Shrimpboats spotted ahead on the horizon. Pick the boat with its running lights left on, because that often means they anchored in the dark or at first light, before sorting their catch. Anchored and not moving, they toss out hundreds of pounds of chum. And that means predator fish will gather for the freebies.

5. Ease your boat within 20 feet of the shrimpboat’s stern, slip your engine(s) into neutral, and drift away from the shrimp boat, lowering unweighted frozen cigar minnows deep and maybe dropping down a jig or two. Scan the depths, especially for ling. If nothing happens within 5-10 minutes, or a horde of 25-pound jacks suddenly appears all around, reel in quickly and hit the next shrimpboat before somebody else does. Repeat eight times, if necessary. You should have limits of kingfish before then. Keep in mind that offshore shrimpers will do anything for a six-pack of beer, regardless of brand, and they’ll gladly pass you a bucket or two of fresh bycatch for your own chumming, later in the day. They might even toss you a 30-pound bag of jumbo shrimp tails, if the owner isn’t around. For this reason, keep several empty 5-gallon buckets on your boat because they’re always useful.

6. Around lunchtime when the sun beats down like Perdition, you can head to a favorite Gulf platform, hopefully on the shady side, and slap that handy 8-foot aluminum rig hook onto a rig pipe. Fishing in the shade can be a precious thing in summer; it’s definitely cooler. You can even snorkel the rig like we did countless times, cooling off. Once everyone has chilled out, there’s another option to fishing these rigs.

7. If you’re serious about catching bigger snapper without being tied off, circle the platform with the boat at 30 yards, watching the depth finder closely for big fish suspended below. You want those big inverted checkmarks on the screen. Pick the most promising side of the platform and make several drifts, dropping down 2-ounce egg sinkers or 2-ounce leadhead jigs tipped with whole cigar minnows, from 30 to 50 feet down. If the current is moderate, stay at least 30 yards from the platform as you drift by, avoiding bait-stealing triggerfish. If the current is really slow, stay further from the platform, up to 60 yards. This technique will also produce kingfish and stray ling. Lighter tackle can be used when away from structure. Rare back on a 15-pound snapper with a trout rod, and watch what happens. Be ready to loosen the reel’s drag.

8. Once you’ve reached your limit of big snapper, and maybe released a dozen or two more, the crew will be ready for something else. After checking out a nearby weed line for mahi or tripletail, again using trout tackle, run back inshore while the getting is good, and try trolling the new pyramid reefs in state waters, discussed in the May issue. (Off Port O’Connor that would be the Keeping it Wild reef). Shake out a couple of seven-inch, lipped diving plugs like the Rapala or various other brands of that size, along with the legendary Texas-made metal Russelure. Troll at five knots around the reef site, marking bottom and suspended fish, while waiting for a strike. Who knows, a 60-pound kingfish could attack one of your plugs. If you hook up and land a keeper fish, be especially careful avoiding those flailing treble hooks. An offshore fish can flop and twist in the blink of an eye, so it might be a good idea to file the barbs off those big hooks. The nearest Doc-in-the-Box is 30 miles from Port O’Connor. Closer, for Port Aransas. Galveston has its own medical center.

9. Safely back at the jetties, if the water is clear with a current, I have a hard time passing up those rocks and clean water. Tarpon may be around; if you stop and make a drift, keep those tired eyes open. I’ve done so and been amazed how these fish roll on the surface near other boats, yet are seldom noticed. Make a drift and let out a couple of baits down about 20 feet, and watch what happens. Lurking jetty predators include big jacks, tarpon, blacktip sharks and kingfish. They will wear you out, if you’re not already hurting from a long day. By then, most of us usually are.

That’s why my fishing buddies used to call me the King of Pain.