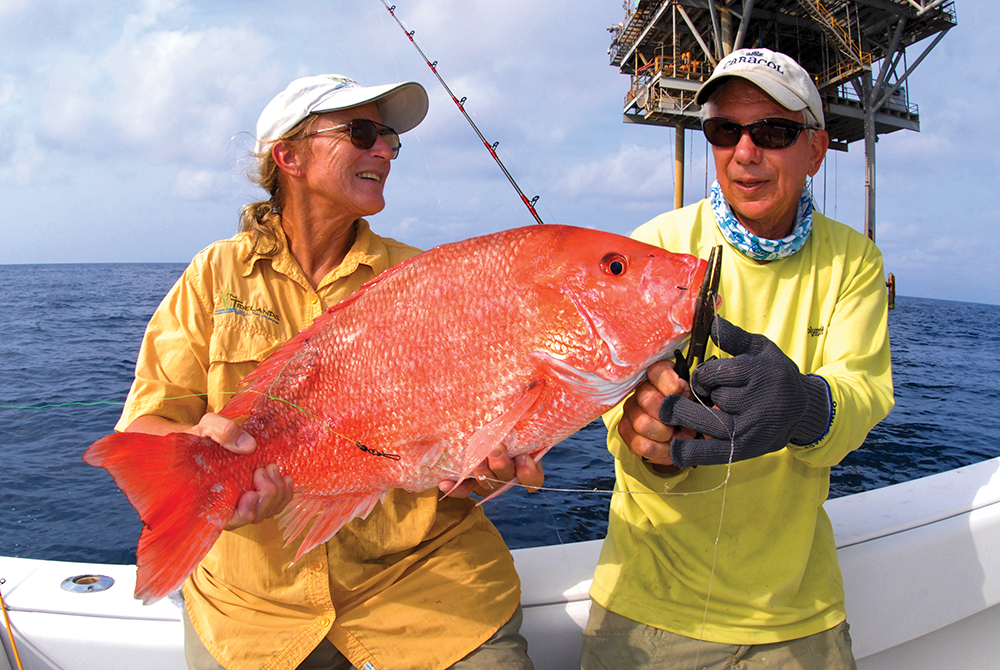 This June marks the best chance for serious offshore snapper action in a long time, with the announcement of a projected 97-day season in Texas, or until the quota is filled. Charterboat skippers must be dancing a jig like the western miners of old, when they found the gold. (Or something like that). Texas fishermen only get 6.12 percent of the total allowable catch in the Gulf however, which means we still have redheaded stepchild status. (Florida and Alabama combined get 71 percent).

More good news: The Gulf Council has approved allowing state management of red snapper on a permanent basis. So, in the future Texas will be setting its own snapper fishing seasons for private-boats in federal waters. Charterboat seasons in federal water will still be managed by the Feds, however. State waters out to nine miles will still be managed by Texas. (That’s why our growing artificial reefs are strictly in state waters).

The season can be shortened, however, if June is calm, fishing pressure is high and snapper take an early beating. Which doesn’t happen that often. Last June was miserably windy on the coast, and over the past decades there have been countless June weekend trips blown out because of persistent wind.

We now have more fishing days, but the same daily bag and size limit in federal waters; two fish per person daily with a 16-inch minimum size in federal waters, and four fish per person with a 15-inch minimum in state waters. This means anglers can pick and choose the fish they keep, releasing smaller fish. It’s better to target the bigger fish, say pick off a couple of (at least) 12-pounders, than keep a couple of “runts.” The better specimens are usually found suspended well above bottom in the water column.

Keep in mind that without careful venting of a snapper’s air bladder or sending it back down with a device such as the Seaqualizer, mortality can result – the gas in a snapper or grouper doubles every 33 feet it is brought up. Bigger fish often prowl at mid-depth, and even cruise the surface when hungry enough. Forty years ago, it was the talk of our fishing group if someone actually saw the water “turn red” from surface snapper. Today, it happens fairly often. Chumming can certainly help make that happen when the current is light.

Under such conditions, using shrimp boat cull, we’ve lured snapper up from the deep. (At sunset, I once saw a chummed up snapper break the surface, with the setting sun shining through his cherry red dorsal fin, something I never imagined seeing). At mid-day of course, we can see snapper prowling under the boat. In such conditions one could conceivably use 12-pound spin gear to catch them, if there are no obstructions nearby. Over the years we’ve caught a great many big snapper, first while using our Ambassador red reels with 20-pound line. With what was considered “ultra-light” tackle on the partyboats, we used to mystify the crews who only used pool cue rods and much heavier reels, waiting for a bite. Meanwhile our bass/trout plugging rods were bent to the butt with snapper up to 15 pounds. It was delicate work, steering such fish around heavier lines. Bonus fish were 10-pound “black” snapper (mangroves) that also lurked at mid-depth. Back then for bait the partyboats provided frozen menhaden averaging six inches long, and that worked quite well. Or even a 3/4-ounce white striper jig with no bait attached; using the jig we could set the hook on multiple strikes before finally getting “bowed up.”

What about using bigger baits? In recent summers I’ve cast-netted mullet from 8 to 12 inches long, icing them down for a trip the next day. Mullet can be found schooling on the surface at the jetties in calm weather, and out there they’ll swim by within easy throwing range; they seem to consider boats harmless when in water that deep. Often we’ll catch 50 to 100 mullet with only a few throws. Once offshore, lower a foot-long mullet deep, and you’ll get slammed by some pretty big snapper. Another trick is to acquire several dozen big, live pinfish before heading offshore. One POC charterboat captain has been doing that for years.

Another old trick of ours was using stout, eight-foot fiberglass rods with an Ambassador 7000 reel filled with 40-pound line. With such an outfit we could cast a “free-lined” (unweighted) bait far from the other, vertical lines. We dragged in some hefty snapper. As a teenager we saw the same technique used by a deckhand on the Sabine Pass partyboat Bluewater back in 1968, except for bait he was using bluegills caught in Taylor’s Bayou…

With the low daily bag limit, we also like to target bigger snapper with small, strong reels, whether baitcasting or spin gear, which is far more sporty than using heavy boat tackle.

The farther from structure, the lighter the tackle. Why? Big snapper will dive into structure and cut the line if they can. So, there’s no need to tie up close to a platform covered with sharp barnacles down below (unless you’re hoping for a patch of shade during midday sun). If the current is ripping fast, tie up and let out 50 or more feet of rope. If the current is light, there’s no need to tie up at all. Instead, try drifting past the platform out 30 yards or so from structure, beyond the bait-stealing “triggerfish zone.” Lower 2-ounce jigs tipped with a cigar minnow or even mullet 30 to 50 feet down, and watch what happens: Hard battles with big fish, and no structure close enough to aid them. Bonus fish here will be king and ling. One can also try the metal stick jigs, such as those made by Williamson, which sink fast and deep.

Structure. Snapper are structure-oriented fish. For the past 50 years, Texans on private boats relied heavily on offshore platforms for easy access, weather permitting. However, hundreds of these structures were removed in the past decade. What’s left out there today is mostly natural rock formations, sunken wrecks, and artificial reefs. To fish any of these will mean using a good bottom machine and a GPS. And research from the Internet or other fishermen. One also has to learn the basics of anchoring accurately near a spot. And retrieving an anchor from fairly deep water, which is no fun unless a floating anchor ball is used. (Attach to anchor rope, hit the throttle in forward gear, and the boat yanks the anchor straight to the surface).

I’ve provided a rough map of where Texas has built many acres of artificial reefs but be sure to acquire some GPS numbers before searching for them. Or just go on a Saturday this summer, and watch for anchored boats. There may be a small fleet of them, especially smaller boats, since these reefs are within sight of land. Cruise around them and keep that bottom machine going, and mark a spot of your own to fish. With rising gas prices it may not be worth it, running many miles offshore for two keeper snapper per angler. Check out these new reefs off the beach, because they’ve had several years for natural bottom growth, and to attract fish.