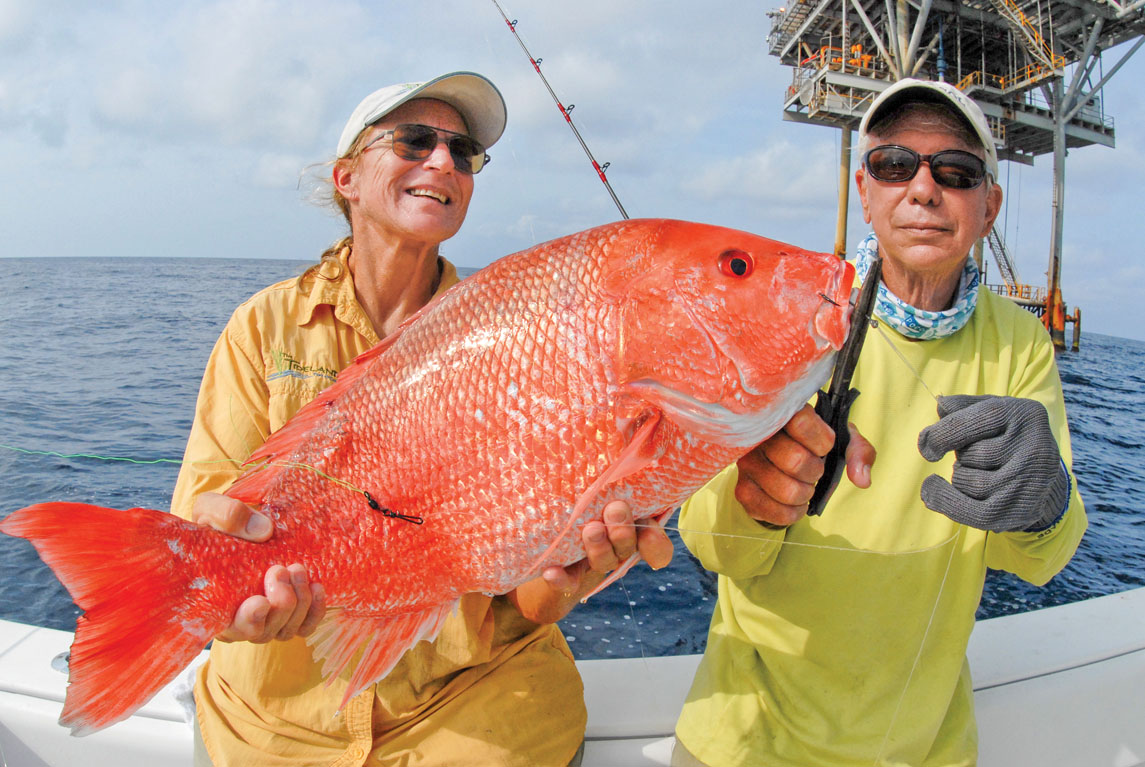 Large schools of red snapper now wait offshore, ready to snarfle down any bait, whether real or artificial.However, the current state of affairs with our recreational red snapper fishery in federal waters has sunk about as low as it can, with this year’s season in federal waters expected to be somewhere between two and nine days. With a daily bag limit of two fish during the windy month of June.

All we can do is catch these fish on sporty tackle, use artificial baits, and target bigger snapper. And then while offshore, pursue other species, of which there are a great many.

-Catch a pair of nice-size snapper. You don’t want to return home with a couple of three-pounders after being offshore all day, unless you’ve fished state waters within sight of land. When further offshore in blue water, I favor keeping snapper of 12 to 15 pounds or so. Snapper grow twice that size, but the bigger sows carry far more eggs. Keeping a 25-pound female denies the Gulf a great many future snapper. A 25-pound female might also have tougher fillets than a 12-pounder. Or not.

-Use big baits. I prefer to use a cast net the day before an offshore trip. Mullet school on the surface around the jetties this month, and one good throw can produce many offshore baits. Last summer during an offshore trip I free-lined 12-inch mullet, hoping for big kingfish while the rest of the crew fished bottom for snapper. We were on a charterboat out of Port O’Connor.Time and again, I tossed out an unweighted mullet and watched it sink straight down because there was no current. I fed out line until the bait was maybe 60 feet down, and then there came a tap-tap on the line. I reared back and eventually cranked up a bunch of eight-pound snappers, and we didn’t see any bigger that day. (Maybe I should have used even bigger baits.) Meanwhile, our crew on the stern baited up with squid and fished bottom like people have done for about a century, reeling up keeper snapper, but nothing of size.

The previous June, when a mullet school cruised by on the surface near jetty rocks, I’d hit them with the cast net. The mullet were iced down and next morning we headed out on a 22-foot boat owned by Mike Cichowski, my high school president from way back when, like 47 years ago. The three of us (including Bud Reynolds) began fishing Gulf partyboats so long ago, our combined Gulf experience was about 135 years. With perfect weather, there was no chance the fish could escape us this day. And I had this 24-quart cooler crammed with fresh mullet…

Turns out, it was the best trip in years. The Gulf was flat with a shower here and there, which we dodged—just the kind of weather I prefer. Instead of drift-fishing over our snapper rock in a fast current, which soon carried us out of the strike zone, I offered to set and later pull the anchor. Which we did. Anchored over the fish, dropping mullet deep, those big snapper never stopped biting and the biggest, a 20-pounder, was hooked near bottom. We thought it was a shark, until someone spotted red far below. During that fast action, three ling came up to investigate our stationary boat. The biggest wound up in the cooler, the other two released. When we were tired of throwing back big snapper, at least 40 fish, I pulled anchor. Mike’s rope still had marsh mud all over it because anchoring offshore in clean water is pretty rare these days—everyone just ties up to a platform or drift-fishes over structure. We had that rock to ourselves, and the Gulf’s bounty was awesome that day.

With our mullet gone, there wasn’t a Gulf platform in sight for a bait resupply; too many rigs have been cut down and removed. We had no way of catching more bait, none. But I pulled out a Rubbermaid box full of seven-inch diving plugs, picked out a blue/silver Rebel, and we began trolling around our buoy. Kingfish came from nowhere and beat on that plug like a borrowed three-legged mule, often right in our boat’s wake. We could plainly see one big flash after another in that clear water, as they hit the plug sideways before the rod doubled over. We fought and released a dozen sizeable kings from 20 to 30 pounds before calling it a day. It was hard work, tailing them into the boat and digging out big treble hooks with pliers, fast enough to release them. And dangerous: My shirt and pants were both ripped by flailing treble hooks, but none of us suffered a scratch that day.

It was a wonderful trip and our hearts were content during the long ride back. However, it was my last fishing trip with Mike. His funeral was this April; he passed away in Port Arthur and was far too young. I know the local fish population is resting easier after his passing.

Mike and other friends from Port Arthur always liked using artificials on snapper, something we’ve been doing since the early 1970s aboard Gulf partyboats. We used to buy our 1-3 ounce leadhead jigs in quantity in Miami, enough to last several years. Today there are countless choices available, even online. Back then we’d catch several 15-pound snapper from the stern of a partyboat, and people around us just shook their heads and called it luck. There were serious battles, working snapper to the surface using our big bass tackle, which in those days were Ambassadeur reels filled with 20-pound line.

Using that technique today with a fairly stiff, 7-foot rod and one of their 6500 baitcaster reels would certainly increase the day’s fun. IF the fish can be found far enough away from structure. Why? Snapper head for cover if they can pull drag, and you wouldn’t want to try this technique only a few feet from an oil rig. Try drift-fishing some 30 to 50 yards from a rig when the current is slow, and watch what happens. Tip a one- or two-ounce jig with a cigar minnow and drop it down. Very often the triggerfish won’t bother bait that far from the rig. Fighting these bigger snapper on 20-pound line is touch and go, much more exciting than using broomstick tackle. And, if you miss a strike and the bait is gone, you can still work the jig around for additional hits. We’ve done that countless times.

If you want to get even more sporty, drop a metal jig deep and dance it around. Those jigs are up to a foot long, sink rapidly, and they’re capable (with their single hooks) of landing very big fish. Last time we drifted over a snapper rock far offshore, one of the guys working a metal jig caught the only kingfish down deep, and then our only scamp grouper. For some reason scamp, tastiest of all grouper, are attracted to these jigs. Catching scamp is the ultimate bonus when bottom-fishing off the Texas coast, taste-wise. A Warsaw grouper is bigger but not as tasty. Anyway, why feed snapper all day when you can tempt other fish at the same time?

Combined with using braid line, these metal jigs have caught grouper in 600 feet of water. With zero line stretch, you can feel every tap and “cross their eyes” when the line even twitches. But that’s just one more option offshore, to work around our tiny snapper season in federal waters.