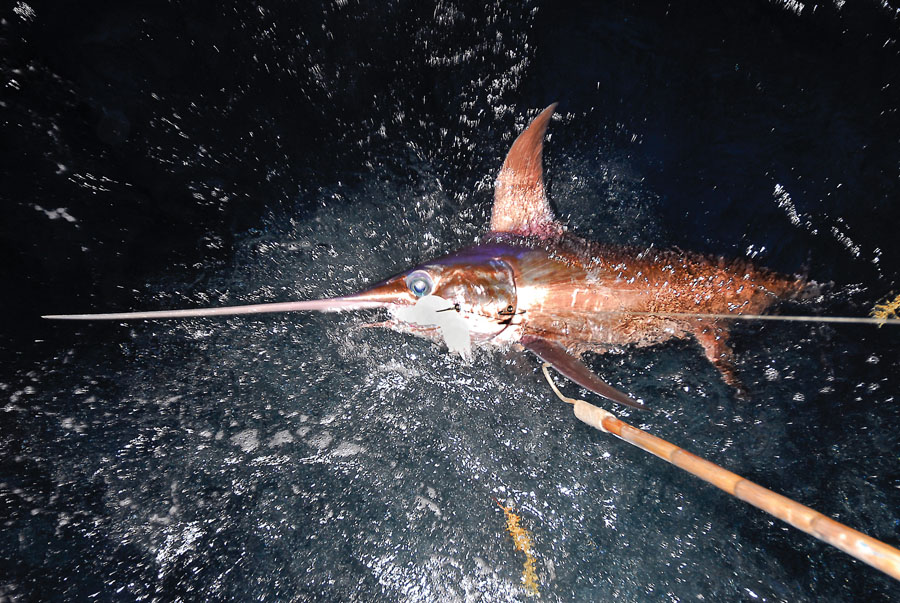 Drifting at night with squid baits yielded this swordfish, about to be gaffed.
I have many fond memories of spending the night offshore in the Gulf, often in small boats, and thought I'd relate a few useful tips here. Useful for surviving.

We started out making overnight trips in boats of 18 feet or so, back in our newbie years, and somehow always returned to port. Back then we just camped on the platforms; it never occurred to us to sleep in the boat. The platforms were solid. If it got rough at night, which it did on occasion, we'd lay uneasy in our sleeping bags, listening to whitecaps passing by only six feet below our pillows. Our boat, with maybe 60 feet of anchor line, pitched and jumped out there like a wild horse on a lasso. Of course, you had to turn the rig horn off. Other nights were glassy calm; when anchored at a snapper rock, we could see stars reflected on the water. It was almost magical. When we woke up at daybreak, the fish were ready for us. There was no trailering, launching and a long run offshore.

Ten years came and went out there, and then we found ourselves in the three-day offshore tournaments. By then we were well-suited for staying out the entire time, though further out than we'd ever been, except on party boats. We were encouraged in our first big event, when our biggest kingfish bit around midnight, a fish that put us in first place. It was the last big king we ever caught at night, however, probably we weren't night owls. We learned to clean up about 10 p.m. and get some sleep. You can't function out there safely without rest, and mistakes offshore can be costly. Out there in the Gulf, your luck can run out fast.

We caught plenty of fish after dark, but usually bottomfish, when bait-stealing triggerfish were asleep. (Yes, triggers actually sleep at night, while snapper and grouper prowl and feed. Hard to believe, but triggerfish during the day were a big problem only a few years ago).

The best thing about overnight trips is that you double or triple your fishing time, for the same tank of gas. There were many times that sunrise and sunset produced our biggest tournament fish, and of course there were no other boats around when we did so. If you're back at the boat ramp during those times, you miss out.

During midday lulls, we often napped when the fish quit biting. Went scuba diving. Took it easy. There's no hurry, during a two or three-day trip. On our rare five-day voyages, it felt like two weeks out there. Those overnighters were great trips. Years later, we could only shake our heads at the frantic, one-day tournaments where you run a great distance in a single day, at high speed, with precious little fishing time, and every minute counts. Not exactly cost-efficient, when you compare fishing time versus cost. But then not everybody is cut out for overnighters.

Many prefer the dock or porch at happy hour. And a stationary bed, instead of rocking the night away offshore. The tuna guys with their big center console boats are at the forefront of long overnighters, these days. The tuna rigs are far offshore and the fish often bite at night under the big lights, especially the choice yellowfin tuna. Even some of the partyboats know this, and they've made great overnighters in the past dozen years or more. That's one scene where you don't have to worry about getting home; the partyboats are safe enough and offer plenty of deck space late at night, after the rookies have collapsed from too much beer and sun.

But back to our own experiences in small boats. We generally stopped moving around at night on dark water. Pick a good spot and get situated by sunset, and stay there. If you have to move at night, cruise at 10 knots or so, a speed calculated to be slow enough not to puncture the hull if you hit a floating object. Everyone can sleep, except the driver, who should be experienced. If we wanted to be somewhere by sunrise next morning, our speed that night could reflect that schedule. It's great to arrive at the next honeyhole at first light.

There were hazards, of course. After anchoring and spending the night on various snapper rocks in open water, we were startled awake at 2 a.m. when a small fleet of shrimp boats passed by on either side.  They were cruising in a pack, headed for the Texas opener of shrimp season. Imagine boats passing by on both sides, one with a spotlight on you. We scrambled from our sleeping bags like a U-boat crew on emergency. Things happen out there that you can't foresee. After that, (since we didn't have radar or an alarm for approaching vessels), we simply tied off to big, well-lit platforms. Nobody was going to run us down at least, and the platform offered shelter of a sort, in storms. A handy ladder on a platform insures you can climb up to the lower deck very quickly. At least we could.

The big, lit platforms are preferable. Slap an eight-foot rig hook on the best corner, and play out sturdy line. An inner tube serves as a sturdy shock cord. The rig's overhead lights ensure you might have action, since ling and sharks and flying fish are attracted. It's almost bright as day, so you can check on the boat and there's no confusion in darkness. You don't want to wake up and find the boat half full of water, which has happened to boats much better than ours. A bow dodger or v-birth boat offers shelter from the wind, rig noise, overhead lights and possible rain.

Mistakes were made, though nothing serious. Once we tied off for the night at a tiny Elf rig where I'd caught a big king earlier in the summer. Unfortunately that small rig had no lights. Unless there was a blinker on top, which we couldn't see when tied underneath. It was a pitch black night and we didn't get much sleep in three-foot seas, and didn't fish. The bigger, lit-up rigs are so much more friendly on a dark night.

Of course the tide changes and the current shifts, and that's why you sleep lightly out there. Let out enough rope, and your boat just migrates around to the other side of the rig on calmer nights, if the wind is light. If the wind picks up and shifts, you have to move the boat, and be quick about it. You will also need someone sure-footed and decisive on the bow with the rig hook.

We finally got caught out there in a real storm one May, with amazing 12-foot seas most of the night. We weren't about to leave that well-lit platform and strike off into a dark, bleak Gulf for home, so we waited until sunrise. In wet sleeping bags. Not too cold, since it was May. But it was quite a ride home next morning in a 26-foot boat, about 85 miles of surfing along in towering blue waves.

When in serious doubt under those circumstances, forget the rig hook, cut the rope and go. We were confident as a team and saved our hook that morning. Retrieving a cheap rig hook in bad conditions could lose the boat, if it gets jammed into the platform. Especially if the wind shifts and your hook is on the upwind side. Twice at night, we've been wakened by a slight shift of wind on our faces, sending the boat towards the platform. Best sleep lightly out there.

Except for that epic storm, we often slept without a man on watch. A full day out there means you need rest. We weren't into getting strung out on caffeine drinks all night. Each night we'd clean up after a little snapper fishing, scrub down with soap and put on clean clothes, and hit the sleeping bags, sleeping under a million stars. Getting sleep meant you made the right decisions the next day, although it took at least one Mountain Dew to wake us. Our theory was, you can't stay awake for two or three days out there without making mistakes. When to move? Where to go next? When to start back?

Aside from getting run down by another vessel, puncturing the hull while underway, night-time storms, and a leak in the boat undetected until too late, night-time fishing is great. But it's best to get a few years of offshore experience under your belt before doing so, because a night-time Gulf is just different.

As for overnight tournaments in smaller boats, they fell from favor after July, 1995, when a huge storm at night caught a tournament out of Surfside, and nine out of 41 boats didn't return. However, the bigger billfish boats, capable of crossing the Gulf to Mexico, now commonly spend the night offshore. They're built to survive.