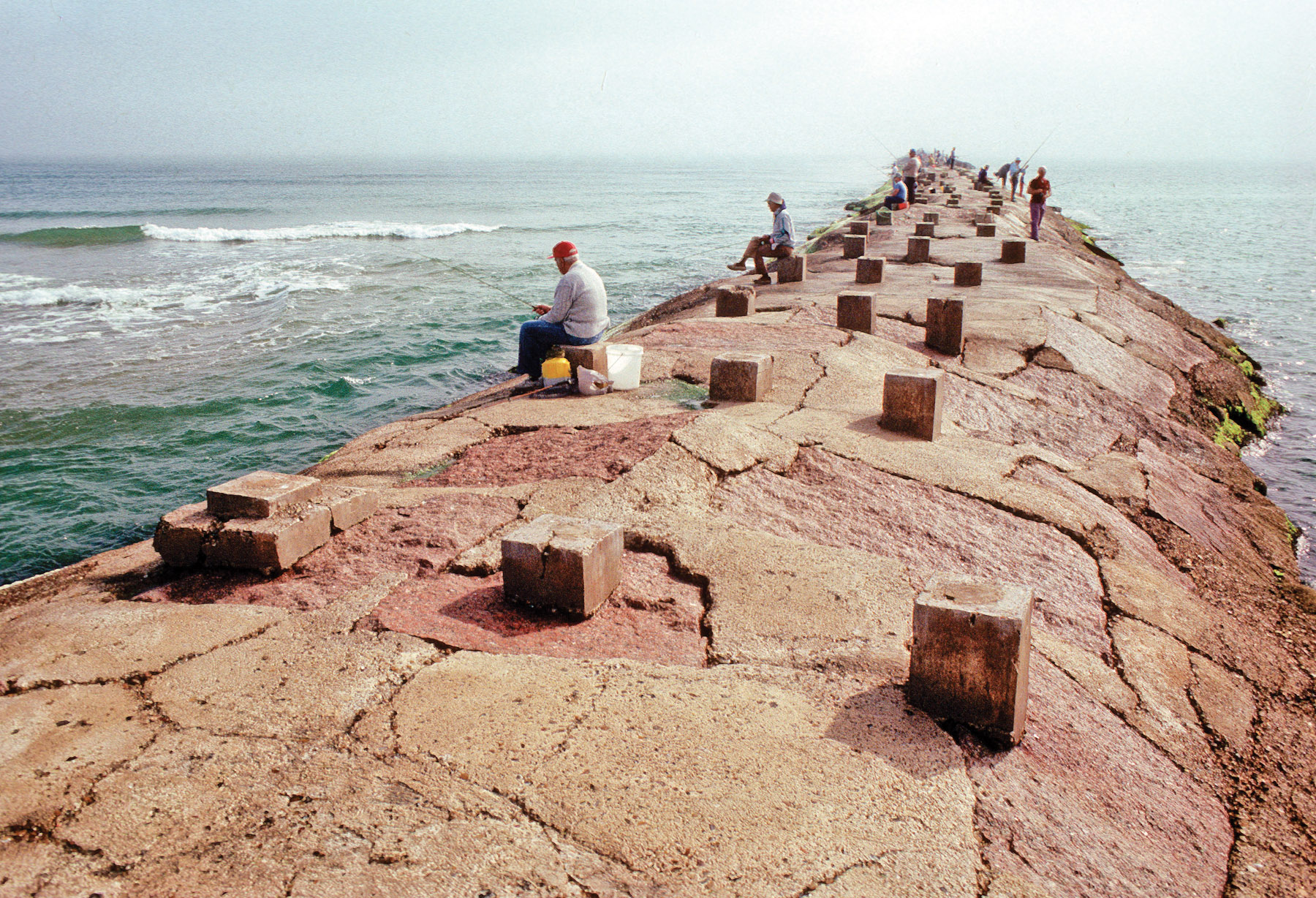 Perched on the last rocks of the Port Mansfield jetty in March - the end of the road, so to speak - we were as far as we could get from Nacogdoches during Spring break. A hot sun beat down on a calm green Gulf as we battled the year's first jack crevalle, brutes with attitude in the 18- to 20-pound class. There were too many jacks and not enough gold spoons; my card of a dozen were finally gone, mostly headed southwest toward Mexico, last we saw them. Gone without catching a single redfish or trout like we'd planned. But then, predicting anything about a spring break road trip is futile anyway.

It was a trip memories are made of: Load a clattering Volkswagen Thing with tackle, ice chest, sleeping bags and fraternity brothers (with very little money) and drive hundreds of miles in unpredictable spring weather, and you're assured a memorable trip - for better or worse. Hitting a fair weather window certainly helped, even if we had to pay our dues before the sun came out.

Our south Texas destination was a long drive from Nacogdoches but we were eager to explore completely new territory. Back then we were strictly upper coast anglers, mostly fishing Sabine Pass and sometimes Galveston, a bountiful area that kept us well occupied. Lacking motel funds and driving in a pounding cold rain on a black March night, we pulled into the A&M campus in Kingsville looking for safe harbor. The place looked deserted. We asked directions and soon found our fraternity brother's chapter house. Around back was an unlocked window so we eased inside, happy to have a roof overhead. (It should be stressed that the core hunter-fisher-camper dudes of our chapter were low maintenance.) There was Pete from Kermit, Jackson from Garland, Shmo from Clear Lake and me from Port Arthur. A real cross-section of Texas, blown south to the Mexico border in a Wehrmacht-style officer's car.

Next day we arrived at South Padre Island, and found the cinder block shelters near the jetties. There was a community shower, and each cabin was cheap with eight bunk beds. A few cinderblocks were missing for ventilation. The cold front that had blown my Volks down through the King and Kennedy Ranches at record speed now kept our room chilled. We stuffed newspaper in the holes and cranked the four-burner stove to max. Good thing we'd brought coats and sleeping bags.

The pounding chocolate surf was appalling, waves crashing over the jetties, and we knew better than to try it. Sand swept the beach in low clouds, heading south, under ragged gray clouds that also scurried south. Out in the flying sand, a lone sparse figure appeared, wearing a digger hat. His name was Billy Boomerang, a recent Vietnam vet, and he flung his hand-carved creations way out there, almost over the surf, and they actually returned pretty close. Otherwise the place was deserted; locals were holed up somewhere. In those days, Padre Island hadn't been discovered much, even for Spring Breakers. Not when we were there, anyway. There were no huge motels with pools, or big clubs. We later saw a hundred hippies or so camping north of town, where flats and dunes ran 40 miles to the Mansfield Cut. We talked to Billy, who often shark-fished from the old causeway pier. We then wandered around the little island town, dallied in Burger King for our daily Gut-Buster and fries, then headed down to Mexico for some cultural exchange. Walked around windy Matamoros with its strange new smells, watching the litter and paper swirl around us. Waiting out the cold front.

Next morning we woke to relative silence, no booming surf, just seagulls. We piled up in the doorway. What? A flat, green surf beckoned. It was time to scramble. Who needed breakfast? Already, locals were easing out to their favorite rocks. What followed was a long, warm day, the year's first real sun beating down on bare backs, and we loaded up the stringer with big sand trout, whiting, the year's first mackerel. Tourists from Iowa passed by, eyeballed our stringer with envy, asked many questions, we felt like heroes. But at the cleaning table on the old Isabella causeway, a salty veteran glanced over our heap of fish and advised us to try the Mansfield jetty next. It's 40 miles of beach-driving, lots of fish, and the tourists don't make it that far.

For the next three days, we fished hard. More fraternity brothers showed up, but we had room to spare. They brought a record player and speakers, but one of the potlickers forgot the album stack. One did remain on the turntable, however, the Moody Blues masterful Our Childrens Childrens Children, written to commemorate Neil Armstrong's landing on the moon in 1969. Day after day that one album played, many times, everyone knew the words. In that sandy environment the album grew scratchy, but remains in our memories forever.

I never thought I'd ever have my freedom;
An age ago my maker was refusing me the pleasure of the view.

Today, listening puts me right back there in the sand, harsh sun, jetty smells and heavy stringers. Some of the old-timers remember this album well, especially the Austin crowd. Today the album can be easily heard with digital clarity on Youtube at: http://goo.gl/mUcOe Day after day we followed a simple regimen: follow the pavement north until it ran out, bump over a few acres of bad sand and then speed north up the beach, dodging tidal wash, driftwood and blue jellyfish, hungry for action up at Mansfield. It was a long way and we clung to wet sand when possible, but if the tide was coming in, there were detours. The top was down and when a west wind blew, we were sandy as the Afrika Korpsespecially on early, ill-advised detours across the island to the Laguna side, where we fancied wading up on redfish or trophy trout. Instead we were bogged down in fine, dry sand on weathered tracks that led nowhere. Stuck, with no timbers for the tires. During one of those delays, Jackson gave up digging with his bare hands and slumped in the sand with his back to a tire. You said there'd be fishing, he whined. Garland was far away, and I think the light and air of Padre Island really put the zap on his head. Around us loomed empty dunes for 20 miles, with sand blowing from the crest of each. We peered around in the glare, and wiped sandy lips. Anyone bring the water bottle? Somehow we escaped the sand trap by brute pushing; it helps when the car engine weighs only 40 pounds or so. After that, we got with the program for the remainder of the tripstick to the front beach and firm sand. Finally nearing the fabled Mansfield jetty, we heard a distinct hissing outside, a disturbing sound, something like sss-sss-sss-sss. It was a punctured tire - we'd run over a dried-out catfish. With the jetties just ahead I sped up and, just in time, reached the rock wall. We piled out as the tire sagged flat. We had no spare; space after all was scarce in the Volks. Not another car in sight, either. Left without a hope of coming home, as our album said. However, the jetty beckoned with flat, clear, green water. It was the classic f___ it dude, let's fish moment. We hit the rocks and fished all afternoon, building a stringer of mostly flounder, and our vibes must have been right, because a tiny dot appeared miles down the beach, soon magically forming into a Volkswagen van. We looked at each other, knowingly. It pulled up only feet away, and the hippies inside insisted we use their spare tire - they wouldn't need it while camping, we could return it next day. And we did. That was the day my precious spoons were lost in violent fashion, when jacks swarmed the jetty and our red reels couldn't stop them. Stripped of my favorite go-to lures, so effective back at Sabine Pass jetties, which seemed a different planet from this land of dunes and sand. With jacks feeding everywhere, there was nothing that could be done, except curse those yellow brutes. Spanish mackerel or pompano in the area would have to be tempted in some other fashion. At least we broke off each jack at the spoons knot; spare 20-pound line was scarce in dune country. One alternate that worked was cast-netting marsh minnows in tidal pools just inland from where the jetty rocks began. They had stripes, something we'd never seen back east, and we called them tiger minnows. Dragging them slowly on bottom through the rocks caught us a dozen flounder. That evening we bore down on the flounder with Rapala knives while Yankee tourists clustered around, perplexed. When we gonna catch some-a-them good ones? Pondered one to another. With another heavy stringer, we felt like pros among that crowd. More nights followed with good music, huge cheeseburgers washed down with Dos Equis, good company, sore hands, salt and sunburn. It was over too soon and the Volks was packed and headed north, this time on real highway. We checked out the jetties at Port Aransas, and Shmo acquired the makings for a dozen dry ham sandwiches from the Mini-Mart. (It should be stressed that, back then, credit cards were scarce, student debt unheard of, gas was 50 cents a gallon and a dollar would take the Volks 60 miles down the road. Yet we were cash-poor at times). Barreling north again, we soon found ourselves driving late after dark, battling another cold front on a near-deserted Hwy. 35, a tedious route to Clear Lake. The temperature fell and the car strained to make 55 miles an hour in cruel, head-on gusts. We really had no heating and in 45 degrees, took to our sleeping bags in the car. It was fortunate I owned a slim mummy bag and drove from inside, groping for the three foot pedals in socked feet. It wasn't too bad... Back in Nacogdoches on a chill Monday morning. I parked the sandy Volks just outside in my private parking spot, on the side of the Journalism building. When I ran into class 10 minutes late and plunked down in a far back seat, the old professor didn't miss it. She pursed her lips tighter than a chickens asshole, then said, I see you've decided to join us.