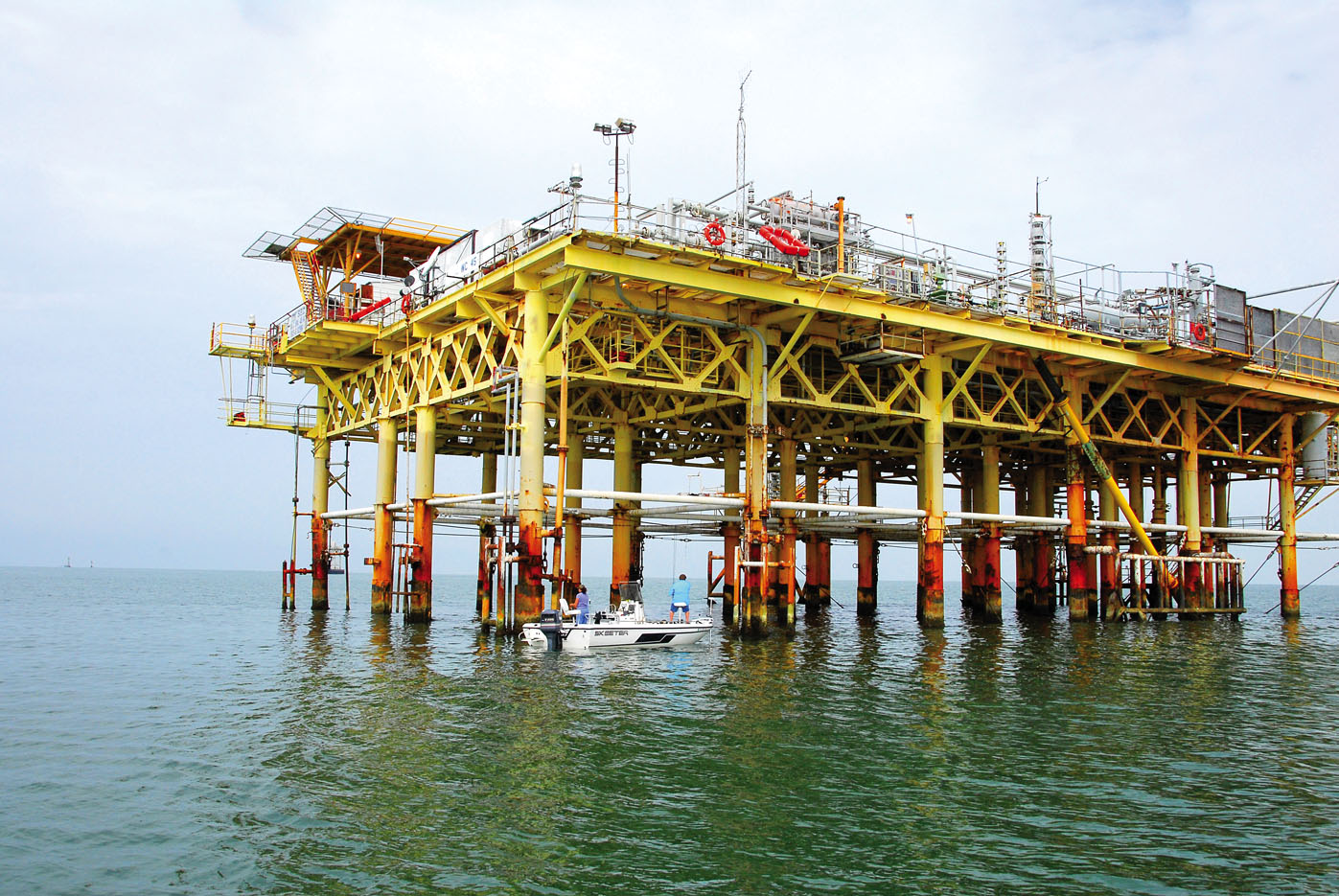 A classic, old-fashioned platform built in the early 1960s in state waters, off Sabine Pass. This one has been called the “Mother 12-mile rig” for three generations, and still stands.
Boat-bashing whitecaps of early summer finally settle down in July, at some point, and that's when you see bay boats popping up everywhere on the Gulf, hoping to discover where the big kings bite. Suddenly everyone is searching for clean water, plenty of elbow room, and a shot at speedy gamesters that can empty a reel quicker than cats run from a water hose.

Most of these boats stay within sight of land, fishing around state water platforms, navigation buoys, and "color changes" where two currents meet. Some bay boats prowl even farther offshore, trusting weather forecasting and other modern amenities, especially radar, whether coastal or onboard. And then you have the kayak crowd off Padre Island, the only fishing craft allowed to launch from the beach there.

I was raised on the far upper Texas coast, where "trout green" water at the jetties was a blessing, but kingfish were scarce as white buffalo. Fifteen summers on the Sabine jetties, and we never saw a kingfish. Shannon Tompkins did see a huge one skyrocket there, a spectacle for that area. We had a wealth of platforms offshore within sight of there, more than anywhere else, but kings were just rare until 20 miles out. We had to travel south towards Galveston and beyond, to find more consistent water clarity within sight of land. I've seen them jumping inside the jetties at POC, Port Aransas and Port Isabel, and personally caught them besides the rocks at POC and Port Mansfield.

There are certainly no guarantees on kingfish in state waters. Clear water may dominate off Padre Island, but the rest of the coast is subject to the fickle whims of current and tide, not to mention a dreaded SW wind. And bad water holds few kingfish. Your chances here are somewhat slim, compared to a typical 30-mile run offshore to the shrimpboat fleet. Yet, easing offshore within sight of land, in good summer weather, and with a keen eye for clear, green water, offers a fine chance of fast action on a light budget.

For this reason, it's wise to carry a couple of mid-level sticks in the boat, even if bay or jetty fishing is first choice in the morning. If the Gulf calms at mid-day, the beachfront is murky with slow action, and a distant blue/green line beckons, I'm an old hand at coaxing the crew a little ways offshore. No one is more familiar with this than my assistant, Miss Amy. And our boys, who found themselves bobbing around out there with full diapers. Confronted with gamefish far too big for youngsters.

Back to tackle: You can slug it out with smaller bait-casting gear, but a pair of outfits armed with 25- to 40-pound line is bad medicine on kingfish and even cobia. Many of us over the years have bolted offshore at mid-day armed only with trout tackle, and had our rears handed to us, so to speak, by greedy ling, jacks, big kingfish, even a school of tarpon. And returned with nothing to show for it except wild-eyed tales. So, keeping a couple of big spinners or bait-casters with sturdier line on board is good insurance, because there's no way to predict how a day will turn out on the Gulf coast.

Every year, kings are caught as close as the rock jetties from Port O'Connor on south. That's a novelty for many anglers, who are accustomed to the long, jarring runs further offshore. I've seen big kings, probably tournament winners, skyrocket on schooling Spanish mackerel off the jetties, and of course along the "color changes" where two currents collide. The best way to explore either option for kings would be to toss a colorful dive plug in the wake, and also perhaps a Texas-made Russelure. Kings are pretty spread out when not around platforms or shrimpboats, so combing the area at five knots with deep divers seems the best way to go.

A couple of summers ago we did just that, trolling back and forth, up and down a color change near POC's south jetty. It was a little bumpy, we were in a bay boat, and a guest flung himself at the gunnel, hugging it tightly. He claimed an old football injury make his shoulder hurt so bad he was sick, but when we pulled just inside the jetties, his pain seemed to vanish. He didn't last long out there, but at least we'd caught a double-header of 14-pound kings, only 100 yards from granite. That day at least, we'd timed good weather and an incoming tide, where blue/green water was right there. It should be noted we'd trolled the color change from Pass Cavallo to the jetties, only hitting kingfish near rocky structure. If we'd run the bay and popped outside, this dude would have lasted an hour longer. Maybe we'd have limited out by then. Something to consider, next time.

Shrimpboats return off the Texas coast in July, so spotting these big boats anchored out there for the day should be a magnet for small boats seeking big hookups. Again, you can get sporty and simply pull up to these rusty craft and use lighter gear, or go with something more suitable for filling the icechest. After all, you can only fight and land so many fish on 12-pound trout tackle. We generally troll deep-diving, lipped plugs around the shrimpboats. Or use the old ways, which is pulling up to a tire-lined, shrimpboat's stern and dropping jigs deep. Or rubber eels, for that matter.

One tip: Be sure to check the shrimpboats first, that left their running lights on. Even at mid-day, when no crew members are visible. There's a good chance they sorted and dumped their catch right there that morning, and there may yet be gamefish prowling below or down-current. In this wide-open scenario, you can toss frozen baits and let them sink deep, and use fairly modest tackle, such as baitcasters with 20-pound line. One memorable trip years ago off Galveston, patiently drifting behind anchored shrimpboats, we had Amy and Joe Doggett on board. Our entire crew used nothing but Ambassadeur 6500 reels that day, fighting many kings without quite getting spooled. With that tackle you have to "know your stuff," however, using a smooth drag and a practiced thumb that didn't get scorched. It was like fighting bull redfish that had a belly full of Red Bull.

Scoring fresh bait is a real plus here, and our captain that day, Capt. Howard Horton, managed to score a bucket of fresh cull. Old, frozen bait will draw strikes, but fresh stuff from a shrimpboat works like a charm. If you can castnet fresh mullet or menhaden, that works as well. When working the shrimpboats offshore, always carry a pack of cigarettes or a six-pack of brew; shrimpers respond well to both of these attractive lures. For that, they'll often trade a five-gallon bucket of fresh cull. Of course, it helps if you carry an empty bucket on your boat. If you run out of bait, shake out a couple of dive plugs back in the wake, and start trolling around these anchored shrimpboat "structures." Keep in mind that, earlier this year, a Russelure from the Lone Star State reportedly won an SKA kingfish tournament back east. It was a 49-pounder, leaving many seasoned captains, live-bait artists every one, in a state of shock. There was much soul-searching and navel-gazing, after that event.

Fishing within sight of the beach is by no means the same as a serious offshore trip 20-50 miles out, where kingfish are the norm and water clarity is seldom an issue. But if the wind quits and clear water can be seen in the distance, and you're sitting at the jetties or giving up on running the beach, by all means give it a shot offshore. Big critters lurk out there in the shadowy depths, and they certainly offer more excitement than a typical day on the bay. (One tip: if you see boats working rolling tarpon out there, don't run up on them and fire off spoons with 12-pound line, because you have no chance. And you're only spooking the tarpon).

On another note, remember to carry a gaff on the boat; that bay landing net won't cut it when a big Gulf predator slams into a hook. Four-foot kingfish and trout nets don't mix. However, since a bay boat's gunnels are low, it's much easier to tail and land a kingfish, than from any other boat design. Grab his tail, and hang on!