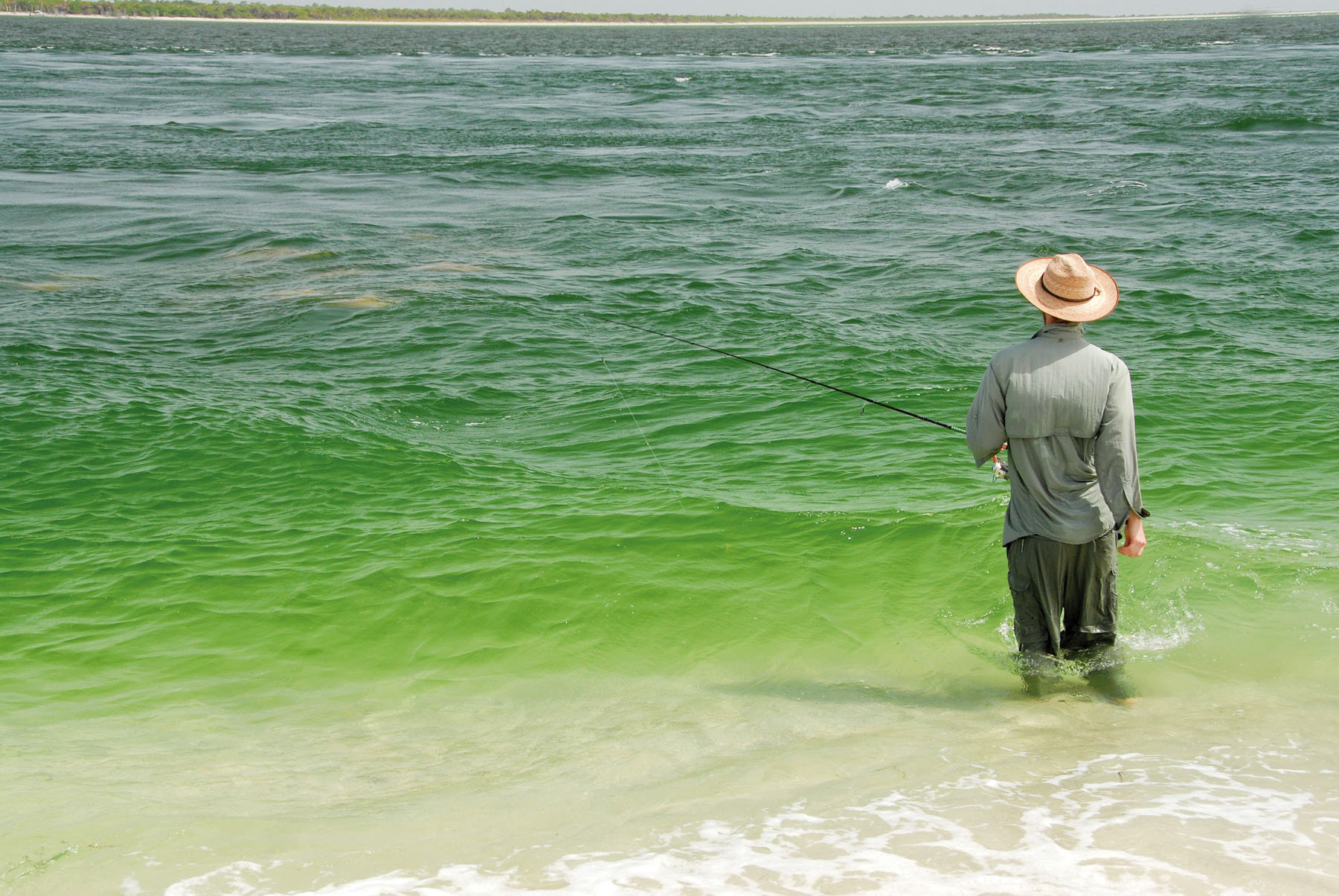 Fishing a deep pass offers hazards, unless you stay shallow.
Fishing has been described as a series of misadventures, with occasional days that turn out rightor something like that. You really can't predict what a day on the water might bring, or the various scenarios that can suddenly turn hazardous. And so while packing up the boat for several weeks of fishing the coast this summer, I have finally decided to wear a life vest with a whistle attached – especially when fishing alone. I keep hearing stories of anglers near-drownings and other tragedies experienced by waders and boaters. I figure it's time for a vest, after so many years on the water. Who knows, I might get dizzy out there in the sun and fall overboard, while fighting a tournament-winning ling (without help) on a blinding, glassy Gulf.

One thing for certain, there is plenty of water out there to drown in. Wearing a vest will probably be as hot and miserable as a Georgia outhouse in mid-August, but hopefully not. My plan is to dodge the worst part of each day when possible, since I'm a fan of siestas, napping even on hard fiberglass or aluminum jonboat seats; morning and evening trips for me. Who knows what each day will bring?

Saltwater anglers can find themselves in some amazingly bad situations. According to news reports, they happen in any number of ways: A surf "undertow" from an outgoing wash of beach water drags a chest-deep wade fishermen a little ways offshore, without flotation. A guy chases after his boat that got loose and drifted away and gets a cramp while swimming. A heroic individual jumps in the water to save somebody in trouble. Or a boater suddenly loses steering control, clips a jetty rock with the boat and gets knocked overboard. Other scenarios: Passing out and toppling overboard from too much sun, a stroke, a heart attack or getting swamped in a storm. How about a lightning hit while you're wading or even getting knocked overboard by a strike? All of these things happen to fishermen, and the hazards only increase when running the boat at night.

I've been fortunate not to witness any drowning, but I've seen some near misses where people were close to going under. A year out of high school, we were adept at climbing Gulf platforms to fish, and did so on many trips. On one expedition, we were 25 miles off Sabine fishing on the up-current side of a rig, and turned around to notice our boat was 30 yards away. It seems the rope came undone. Whoops. Seas were one foot and the current headed west. The boat belonged to my friend's dad. It was either watch it drift away or go get it, and every second counted. My friend Dan set his snapper rod down, jumped off the rig, hit the water 12 feet below, and took off after it. But it was hard to catch. Soon it was 300 yards to the west in late afternoon, and I could no longer see him and I could barely see the boat. Not good... Turns out he was so tired, he clung to the outboard motor and rested for a while. Somehow he climbed in, thanks to the low transom that was in style back then, and he was motivated. That trip could have easily ended in disaster. Dan's choice was catch the boat or drown, since he was down current from the platform. In retrospect, we should have let that boat go; it was a crappy Crosby Sled with an 85-horse Evinrude.

A boat is worth nothing compared with a human life. We could have camped and fished on that platform until a helicopter came by. There was plenty of raw fish to eat and we didn't even explore accommodations upstairs. But people tend to jump in the water when every second counts, and there is no time to ponder or consider the odds. If he'd been wearing a CO2-inflated PFD vest, that would have been ideal. Or clutched a bleach bottle with a handle, for that matter.

Another rash, split-second decision that almost ended in a near-drowning:

One evening I was coming in from offshore with a charter and, since it was flat calm, avoided the big Matagorda jetties and headed for Pass Cavallo instead. I noticed a small orange object on the water, and figured it for another party balloon. As we drew nearer, it looked unusual, like the heads of two people, and indeed it was. The outgoing tide had them in 25 feet of water, headed offshore. It seems a skinny little kid with a life jacket, maybe eight years old, had stepped off the beach into deeper water. His grand dad, a real big guy, swam after him with no flotation, leaving his 20-foot Wellcraft anchored in the surf. By the time he reached the youngster, he was too tired to function and just hung on, his weight dragging them both about chin deep. Without the orange life jacket, I never would have noticed them.

We dragged the 40-pound boy into the boat easy as a redfish, but granddad was way too heavy, so we towed him into shallow water. He didn't say anything, just grabbed the kid and dragged him towards the sand. He knew he should have used his boat to pick up his grandson, but he wasn't thinking that far ahead. Pass Cavallo has some sharp drop-offs; if it was accessible to cars, it would have claimed many lives by now. (Of course, Cavallo is pretty sanded-in and anemic these days.) San Luis Pass with its weekend traffic claims a higher toll.

Experience on the water counts. Another time at Pass Cavallo, I noticed a drifting, empty boat. In the distance on Sunday beach, a lonely figure waved. I towed the boat over to him only to discover that it was a local fishing guide. You can bet he wasn't swimming after his boat. It seems a gusting SW wind dragged his anchor and chain right off the hard-packed beach. The same thing happened to me later at Mansfield's east cut, and my three-year old son and I just chilled on the beach for a half hour, until a boat came by. It was November, not my favorite swimming season anyway.

There are a number of options for protecting yourself and loved ones while fishing. There is a hot-weather friendly CO2 vest, which inflates automatically when you hit the water. That's best for boaters who don't intend to get wet, but a real nuisance for wade fishermen. There is also the self-inflatable few-puffs-of-air vest, which only inflates when you need it, another good choice. (Though said to chafe the neck). Both vests at least won't cook you in the summer sun. You can attach a whistle and smoke flare, if you really want to increase your odds of getting picked up.

However, something as simple as an empty jug on the end of the fish stringer could have saved a few wade fishermen from drowning, over the years. Texas surf fishermen are famous for bobbing around out there on the third sandbar, in water over their heads when a wave passes, swimming between the second and third sandbars. The old-fashioned Styrofoam pith helmets might have provided buoyancy in a swimming pool, but they probably broke up in heavy wave action and besides, they were often covered with favorite Mirrolures and Bingo plugs. I remember Bob Brister writing that he had to swim back to shore with one hand that was pinned to a big trout, courtesy of a 3-treble hook Mirrolure. Caca pasa.

There is also the life ring with an inner, mesh net. Academy has the Deluxe Float Well for storing fish while wading, but veteran waders say don't depend on it for floating very long. It carries a mesh bag that could be cut loose and tossed aside, if you find yourself bobbing offshore with a few trout. Real throw-rings, required on many boats and public swimming pools, and costing twice as much, can be adapted for wade fishing. One of these will keep you floating for days, says one wader from the Christmas Bay area:

"I made one myself. I purchased the throw life ring at Academy as well as the mesh bag. The mesh bag was in the football equipment area. Finding the rod holders was my biggest challenge. I ended up finding them at a Gander Mountain near Sugarland. I use a hole saw to cut the holes out for my rod holders in the throw ring, then sealed them with marine goop. I used tie wraps to secure the mesh to the throw ring. I made a couple of holes in a small tackle box and secured them to the throw ring with tie wraps as well. I've had it for 7 years and it's still going strong."

The main item to avoid drowning in most situations is to keep cool and think hard before doing anything rash. Weigh your options. Remember that guy who fell off a commercial fishing boat off the coast of New York in the middle of the night last July? No flotation device. A smart lad, he pulled off his rubber knee boots (that his friends often made fun of), poured out the water, placed them upside down under his armpits, and survived about 18 hours in the chilly Atlantic. Now that was one levelheaded dude.