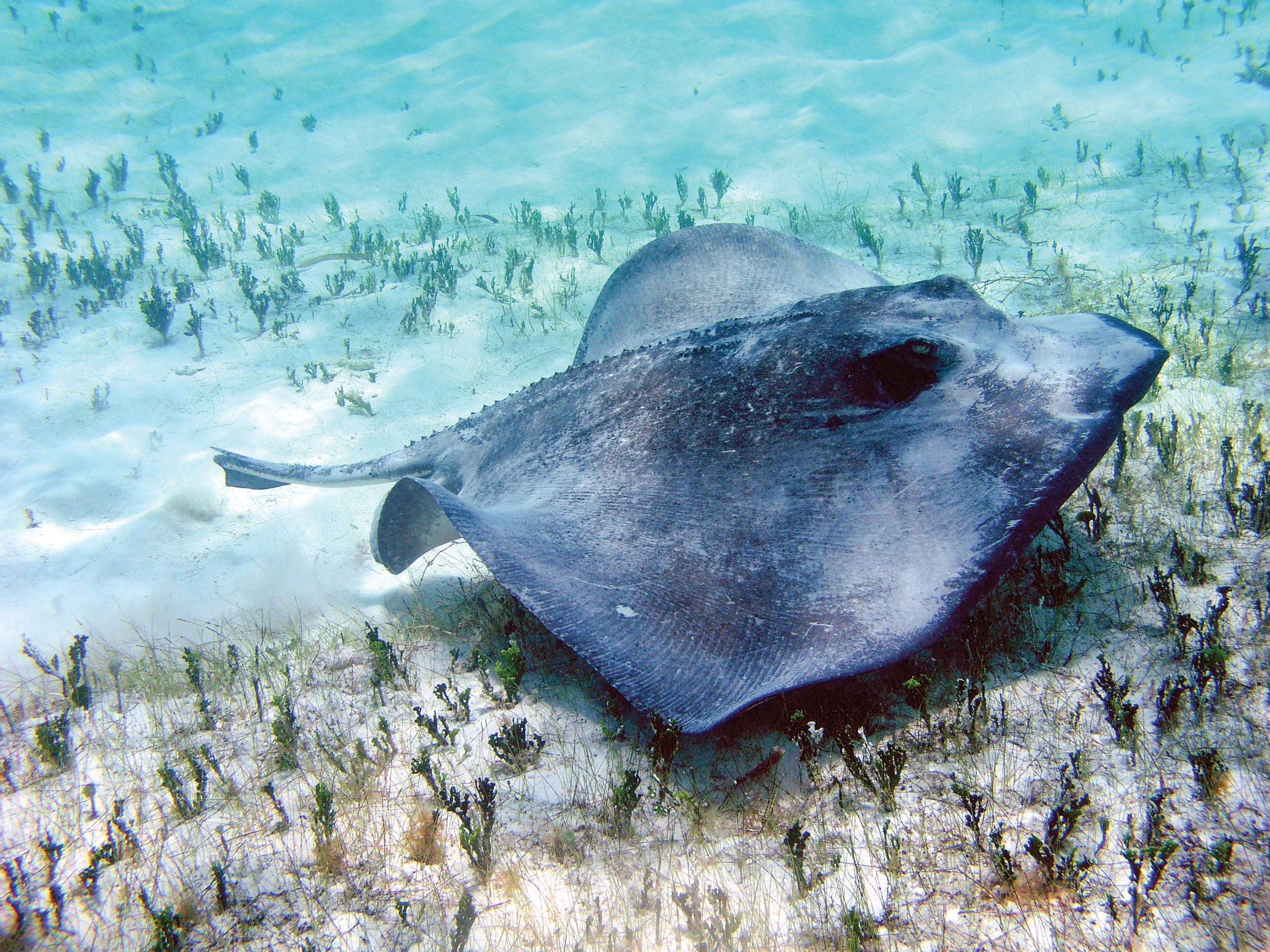 Let's talk turkey about stingrays, since August is the worst month for stinger-related injuries in Texas. In this little battle between man and beast, it's been touch-and-go, with several thousand casualties among anglers and waders in recent years. Focused on that trophy trout somewhere up ahead, it's easy to grow careless and speed up a bit, tromping over a serious case of misery.

Getting whipped with a poison stinger up to six inches long is one of the worst things you can expect from Nature along the coast, if you discount shark attacks, which are rare as diamonds. Stingray injuries are fairly common; some waders have been hit more than once, and coastal infirmaries have been filled with the injured on occasion, when large numbers of swimmers, spring breakers and tourists hit the beach.

Stingrays are a tough foe, nearly impossible to see. Their stingers are made of Vasodentin, a very strong cartilage. It is a stingray's sole defense and they can rotate and jab in any direction, like a Musketeer's rapier. Twin grooves on the stinger's underside contain venom-secreting cells. When spines break off inside the wound, they often continue to secrete venom.

Wading bathers around the globe are often hit, but Texas no doubt leads the world in wade fishermen-some of whom limp home after being stuck. Injuries range from surface cuts more easily treated, and then deeper punctures, or even broken-off stingers that, with many barbs, have to be removed in surgery. It's a grim business, and wade fishermen should know what they're getting into. Precautions include shuffling slowly in murky water, wearing stingray leggings, or sticking to clean, very shallow water while keeping a sharp lookout with every step. Wading barefoot is begging for trouble, of course.

Guides have been hit and careers threatened. Wading guide Mike McBride of Port Mansfield was struck three years ago and waited until the following day for treatment. By then his foot swelled up and turned black. He missed a lot of work while recovering, and reportedly still limps to this day.

One angler reportedly died while wading Boggy at Port O'Connor in the 1990s. It was early April and he was close to the boat, but stepped into a muddy hole where lay a huge stingray, that pierced his upper thigh. The guy died right there in shock next to the boat and his buddy, several hundred yards away, waded over to see what the problem was, though too late.

It's a wonder we weren't hit during our beach seining parties back in high school days near Sabine Pass. Out there, scooting along with the tide and neck deep in the surf, covering a few hundred yards at a brisk pace, you could step onto a real monster-though big ones lurk in the bays as well. So far, I've led a charmed life in stingray habitat, but then I didn't wade nearly as much as some, except over shallow green rocks. (We earned our visits to the ER by walking and plugging from algae and oyster-covered jetties, instead).

As for those big, life-threatening stingrays in the back-country: Some apparently spawn in mud-bottom tidal ponds every spring; guide Curtiss Cash actually targets them, not with a bow, but for big trout that hover nearby. He says if you pole the boat around and search for big rays, you can find some serious brutes spanning four feet, in water often tromped by waders. From the vantage point of a poling platform on a boat, he says you can lay a streamer fly right on a stingray's broad back, and often a big trout will be right there to pounce on it. "I've seen these big female stingrays attended during Spring by several smaller males, that moved towards us with their stingers upraised, like scorpions. It was creepy," Curtiss said.

The only time I've become attached to a stingray, I was helping remove them from a purse seine pulled by state biologists. It whipped its tail around "quicker than a cat can lick its ass," and the barb was pinned flat to my glove's open Velcro strap, across the wrist. There the stingray hung, big as a pie plate, flapping its wings, its stinger a quarter inch from tendons in my wrist. I slung him off, and he skipped across the water and slunk away. I was the only crew member who avoided a direct hit, though I made fewer field trips. Our boat was supplied with chemical heat packs to treat stingray wounds, which sounds like a good idea. Like a cyalume light stick, they only work once when you pop the contents inside. They're said to produce plenty of heat for up to an hour.

Most anglers struck by stingrays take the pain without really getting even. In the stingray wars some flounder giggers, safe in the boat, have poked a few as a means of payback. In the past few years, a few guides have started taking clients out to arrow rays. Water clarity and calm shorelines are requirements, but rays can be shot day or night from inexpensive aluminum boats rigged with or without lights. Good vision and sunglasses are required during the day. The concept is pretty simple; you fire away at the ray of your choice, and have about 50 feet of line stored in a bottle, which feeds out at a rapid pace when a crippled ray takes flight. After scoring a hit, you fight the ray with the handline. Often in a gingerly fashion, to avoid pulling the arrowhead loose. If you miss, a primitive reel quickly cranks the line back in the bottle.

Guide Ed McCormick in Florida makes a full-time living taking guided trips to shoot rays, flounder, sheepshead, and in fresh water, tilapia, gar and mullet. Rays are his easiest target, of course, being broad and slow-moving. Normally you fire downward at a sharp angle, like gigging flounder, but Ed was shocked when I let fly 50 to 60 feet, and twice my arrow quivered in a ray's back. We landed both fish, though the fight was touch-and-go with the handline, each arrow barely sticking. One dove into a 12-foot channel and clamped to the bottom, but we eased him up within gaffing range and he was soon limp on the cleaning table. Besides providing dinner, that was one less ray to be stepped on by waders.

Women are getting into the action; Ed's girlfriend Crystal Ruland drilled a few rays with her own compound bow, and she's racked up quite a few in the past two years. Ed's jonboat is wide enough for two shooters at the bow, and Crystal and I jostled for position when a tempting ray presented itself.

With bowfishing, the aiming point shifts with a moving target's direction, complicated by angle of refraction. An approaching ray requires aiming a good ways short of him. With a ray departing in a hurry going straight away, you pull back and "put the bead right on him and good," as our Cajun neighbors say. Thud! Not as easy as it sounds: Multiply the refraction variables of a ray swimming towards any point of the compass. A bedded ray makes an easy target however, unless a rookie mistake happens.

Ed keeps a huge gaff and icechest on his boat; his clients have shot rays that were so big, they absorbed three arrows before being landed, and after a considerable fight. The somewhat-tasty wings are carved from each ray and the rest discarded.

Shooting rays is certainly more of a challenge than catching them on hook and line; they generally put up a glum fight with a hook in their mouth, though not always. Big "barndoor" rays will sprint around, pulling drag from a big reel, when they're not clamped to the bottom. In our youthful offshore days, we dealt with these monsters by blazing away with an automatic .22 rifle, when a big hooked one passed by on the surface. Fortunately we were offshore, and our fusillades either thumped into ray or skipped and splashed across empty water.

As they say, paybacks are hell.

When wading, keep a hot water thermos or another source of quick heat on the boat. Heat quickly cooks or de-natures a stingray's protein venom. Heat is your best friend if you're ever struck, and hot water penetrates far better than dry heat. Boil a quart of water in the morning in the microwave and store it in a thermos, but cool it slightly with extra water when treating a stingray wound. You don't want to burn the victim, who has enough trouble. After that, you have to worry about damage and long-term infection, and the nearest emergency room can provide treatment. If you wait an extra day to visit the ER, a stingray injury can seriously worsen.

For stingray leggings, ForEverlast Fishing and Hunting Products of Hallettsville, Texas offers a line of Ray-Guard shields, reef boots and wading boots with shields attached. Find them at your local tackle shop or at www.foreverlast.com.