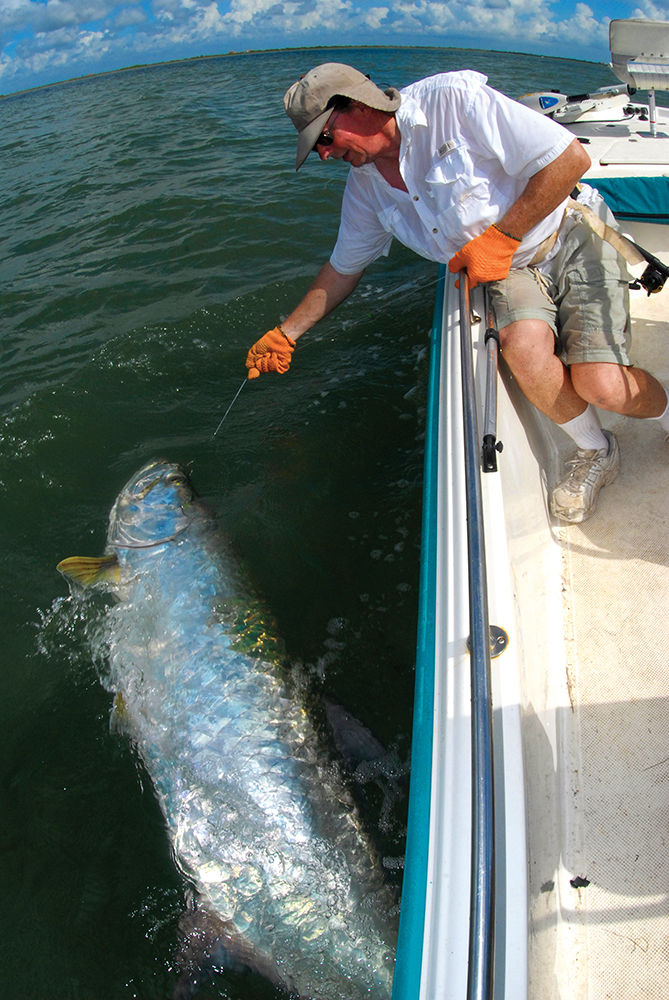 Leadering a big tarpon in a Texas bay. Every August, some of these fish venture inshore.

Anglers with tarpon on their bucket list would do well to fish August along the Texas coast. The diehards will be out there too; some of them have caught hundreds of these magnificent fish over the years.  And paid their dues, of course. Which may involve a long boat run in choppy seas—and while waiting for a bite must deal with sharks, big jacks and bull redfish that run interference and can wear out the anglers.

If you succumb to tarpon fever like many of us have, with access to a Gulf-worthy 20-foot boat or bigger, here are some tips and tactics to consider:

Tackle:  If you see tarpon boats a mile or two offshore, refrain from crashing their party. You won’t be welcome, without a decent electric motor for silently keeping up with these moving fish. Outboards are loud underwater, spooking entire schools, and the most serious guys who often get multiple hook-ups use diesel inboard engines.

You don’t want to hook and harass one of these great fish while using what amounts to Mickey Mouse tackle, which is 12-pound casting gear meant for trout and reds. With that gear, you’re wasting your time and the tarpon’s too. Aside from inadequate gear, you may also be motoring through a school of surface tarpon, which will usually dive and disappear. I’ve caught some modest 60-pounders using 25-pound spin tackle and a stiff rod, and know how to pressure a fish to the breaking point, but off Texas beaches in 20 or 30 feet of water, hooked up to a six-foot tarpon, there’s nothing that can be done with 12-pound tackle. These fish can dive deep and just keep cruising along, and light gear won’t even stretch their upper lip. Think bigger reels with lots of 40- and 50-pound line, and stiff rods.

Artificials: There’s a wide arrangement of plastic, twister-tail worms up to seven inches long that can be cast or trolled for these fish. Louisiana anglers, where these “Coon Pop” style lures were first invented, will troll up to six of these jigs. When they mark a school of deep tarpon, they slap the diesel motors into neutral, allowing the two-ounce, leadhead jigs to twirl and sink like a spread of depth charges down to the school. Some boats have hooked six big tarpon at the same time, resulting in complete mayhem. You can bet they use fifty-pound line on the reels, for starters.

Natural baits: Tarpon aren’t picky and when they’re hungry, look out. One Texas bay guide was knocked out, while trying to lift a ladyfish into the boat: a big tarpon tried to eat it, launched into the boat and knocked him out. He woke up amidst fish poop and broken fishing rods. Natural bait choices are many. For years, we mostly fished along the beach and Pass Cavallo with natural baits, and that meant throwing a castnet. Everything seemed to work; menhaden, croaker, sand trout, pinfish, ribbonfish, mullet. Our biggest daytime tarpon was hooked with an eating-sized croaker during a fast, outgoing, muddy tide. Perhaps that croaker was sending out low-frequency pulses that trout favor so much. It was a scary big tarpon, our boat was small, and we were actually glad it broke brand new 50-pound line only 40 feet away while in mid-air.

Leader and hook:  Tarpon have sandpaper lips that can sometimes chew through 80-pound mono leader. We always preferred 150-200 pound mono. It’s difficult to tie a big circle hook to heavy leader, though we often managed by hooking a porch railing or something solid and pulling hard. Using a crimp sleeve mashed with proper crimping pliers is better. It’s often been said that a dull circle hook works better on tarpon, because it settles fully over their lip before digging in, like a can opener. Tarpon have seriously tough lips. It’s like trying to penetrate rawhide.

The Texas record is 210 pounds, but many big ones have been caught that were never weighed. We fought two huge ones until 10 p.m. at night that were never weighed. One was lip-gaffed, and two of us could only lift the head out of the water, before releasing it. The other we followed with the boat in very dark, breaking surf for a long time. Finally dropped anchor to stop him, and the huge fish swam around the rope and broke off. There are big tarpon out there, but the biggest are off the coast of West Africa, where 300-pounders exist that are eight feet long, with ponderous girths. A number of world records have been set there, notably by Clear Lake’s Tom Gibson, a NASA engineer whose life goal has been to catch thousands of these fish. Which he’s done. Today, Tom fishes in Trinidad where deep water only a hundred yards from shore is home to schools of tarpon of all sizes. It’s much easier there, than rocking and rolling off the Texas coast, running a dozen miles of choppy seas, hoping to spot a moving school. Guides in Trinidad were using reef squirrelfish for bait, but Tom showed them how well ribbonfish will work, caught by local shrimpboats there, and now the locals mostly use ribbons.

Texas tarpon are precious every one. There aren’t that many of them, except on ice cream days when a boat might encounter hundreds or even several thousand migrating fish, rolling along on the surface. When that happens, fortune has truly smiled. Tom Petty said it best: Some days are diamonds; some days are rocks. Return the following day, and you may not see a fish.

Do No Harm: It’s always good to refrain from dragging one into a boat, the beach or worse, a pier. Tarpon should be kept in the water the entire time before it is released. In Florida, it’s against the law to boat a tarpon except when using a special harvest tag, like for trophy deer. (Few people ever use them; they know a fiberglass mount will last decades longer.) Tarpon can be photographed by standing on the gunnel with a cell phone, while the angler drags his fish across the surface. Wear gloves to twist out that circle hook.

When we caught our first tarpon near Pass Cavallo in 1988, just a 50-pounder, we became instant fans. Brought it aboard for photos where it flopped and pooped all over the deck. What a mess. We agreed to never boat another. However, we become huge tarpon fans and in the following years caught a lot of big ones. Our catch rate was high; it helped that we packed up the kids and moved to POC back when rent was cheap and the Pass was 30 feet deep. One could fish there every day in calm water. With the Pass to ourselves most of the time, we often jumped three big tarpon every evening. The only other tarpon we ever again lifted from the water was hooked at twilight and eventually traveled up into the bay at night. Motoring to the nearest shoreline, I jumped out in thigh-deep water, and cranked that puppy in with a Penn International 30 reel. My two buddies jumped in and lifted that fish of 120 pounds or so just above water level for a quick flash picture, then we watched the noble fish swim away.

This June we once again visited Boca Grande Pass, the most famous tarpon honeyhole of all, south of Tampa. At a half-mile wide and 80 feet deep with healthy daily currents, the sand has been scoured down to bedrock. Every year during May and June it hosts thousands of tarpon. The water exchange from Port Charlotte bay to the Gulf is impressive, with lime-green water in the Pass all summer. In the past century, nobody knows how many tarpon have been caught there. It’s a spot worth visiting, and smaller boats are welcome. Boats of all sizes are seen drift-fishing here, one of them an old cabin cruiser right out of Gilligan’s Island.

There are basically two main techniques employed for tarpon in this area:

> Those who prefer a little solitude away from the more crowded pass use tower boats with outboards, running just the beaches north and south, looking for small pods of tarpon. Once sighted, they ease ahead of the moving school, shut down the motor and pitch live bait and lures.

> In the Pass itself, the tarpon may be deep or busting on the surface, hundreds of fish knocking whitewater three feet high like a school of tuna, which we saw in June. It doesn’t matter what style of boat is used in the Pass, from kayaks to old cabin cruisers, they drift with the current using deep twister tail jigs or live bait. (Kayaks are rare here; those 15-foot hammerhead sharks that call this place home make kayak fishing a little too exciting, even for the YouTube crowd.) Boaters simply drift along, lowering twister-tail jigs deep, often while marking deep schools of these fish with depth finders. They catch tarpon in relative comfort, sitting in deck chairs until a rod takes a bend. After a hook-up, it can be tricky easing the boat along through other boats while following a hooked fish. The boats we saw behaved well, there was no Saturday craziness. Each boat patiently idled around for another drift, avoiding other boats or running over the fish. It’s quite a place to visit.