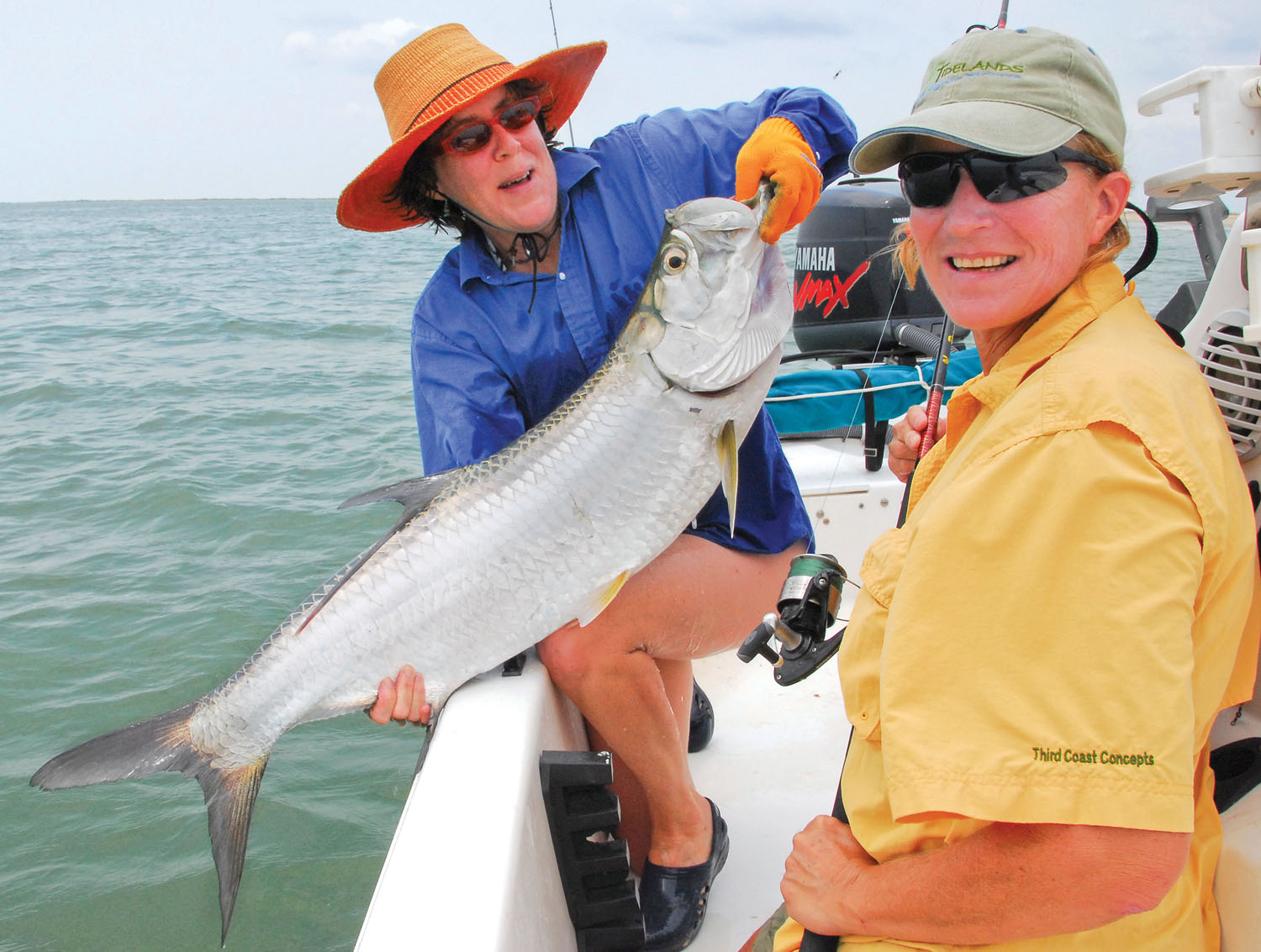 Smaller tarpon roam the Texas surf in August and September. Here’s a couple of Port O’Connor gals with a tarpon, about to be released.

A number of anglers have mentioned over the years that catching a tarpon is high on their bucket list of fish to catch in this lifetime. It can certainly be done along the Texas coast, and August is prime time. From around High Island south is considered best. Last year, generally speaking, most were caught in "tarpon alley" from San Luis Pass of Galveston Island, east to High Island. And the middle coast had a pretty slow summer, compared to previous years. I think the tarpon action further south along Padre Island may be more relegated to jetty fishing, although you never know when a migratory school can pass through, even as late as early November, where the last of the herd migrates through for their winter in Mexico.

Not sure where the small tarpon have gone, but around the Port O'Connor jetties where we used to see them quietly rolling every day, that no longer seems to happen. Last summer if I sat very quietly and saw a small, rolling pod of mid-size tarpon out in deeper water, and drifted near them, they always refused to bite. Other fish weren't so picky; one morning out there by myself, other fish attacked the baits instead: a 20- and then 30-pound king were unhooked and released, also three big jack crevalle landed, and five blacktip sharks in the 40-pound range, with the circle hooks left in those. (No use getting a hand maimed to save a cheap hook). It was dicey work by myself, going 'round and 'round the boat, almost soaked from splashing fish worked alongside–and I was ready for a nap when it was over.

This is big fish action and a cast net is critical for targeting tarpon with bait. Scoring a quart of live croakers or shrimp at the marina just won't cut it, if you're seeking the "man in the size-large silver suit."

Cast net: If you're serious about tarpon, learn to use a cast net. In Texas they're only legal up to seven feet in radius, which is 14 feet in diameter. But it doesn't take a big cast net to catch ample bait if you're accurate and can hit the water with a full spread. Years ago while drifting in little oil field canals and blind throwing, we caught croaker, pinfish, sand trout, menhaden and mullet, and all of these work on tarpon, who are definitely not picky when it's feeding time. More recently this June, the hot thing this year is big pinfish, which are swarming under the fish cleaning tables. One would think catfish would be a hazard here, but somehow I caught 40 big pinfish with one throw at a popular cleaning table without a single catfish. It was amazing. And pinfish are hard-working live baits. The same big pinfish were also caught rapid-fire on small hooks in a waterside motel with boat docks.

The really serious tarpon guys who concentrate on Texas tarpon every year now mostly troll jigs. And the most serious of all use diesel engines, because the exhaust is above water and doesn't spook tarpon. They troll a spread of jigs like they're billfishing, except more slowly and deeper. Feeding tarpon are often down deep, and the captain can "bump troll" through an area, putting the engine in neutral when big fish appear on his depth finder, thus dropping the spread of jigs into the right spot. Sometimes, five tarpon are hooked at once, which is pure mayhem. I've been on a boat with a triple-header going on, and that was plenty. Especially when there were only two of us to handle them.

But we landed all three, because big circle hooks really dig through a tarpon's bony lip. The tarpon jigs (photo attached) have their hooks clipped off, and then a big circle hook is wired on top, and the twister-tail worm jigs (of many colors) wiggle with the slightest movement. These jigs are proof that tarpon feed on very small prey. They're called Coon-Pops, invented in Louisiana, and they've landed countless big tarpon in our neighboring state.

One thing to remember with tarpon: much extra care should be taken, reviving them. This is a precious resource for Texas, and tarpon numbers are a small fraction of what they used to be. Every fish counts, and deserves to be released in good shape. That means dragging them forward with the boat engine in gear, until the fish powers away. It also means not fighting them for hours with inadequate tackle. Use at least 40-pound line and preferably heavier. Don't use a light drag–take the fight to the fish. An exhausted tarpon that fights to the last minute will sink to the bottom or stagger around, easy prey for sharks.

Texas once had a great tarpon fishery. Port Aransas, for years, was simply called Tarpon. The fishery was badly abused; countless people brought their tarpon to shore for pictures. The Tarpon Inn, which has burned down twice, is said to still have 7,000 big tarpon scales with the angler's name and weight of the fish. There and in Homosassa, Florida, the tarpon have been driven off except on the best days when a few can be seen or even caught. The main Texas fishery for tarpon is now offshore in 20 to 40 feet of water off our upper coast. It can be a tough area to fish because of wind, but it generally calms down from July through September. Find a rolling school of tarpon out there and you may have company in a hurry. If you're going to compete with these guys or try for a bucket list tarpon, don't run out there with trout tackle and expect to land one of these fish; it's virtually impossible. Why? A hooked tarpon can and very often will sulk deep like a big shark, and tugging on them with Mickey Mouse tackle (in this situation) simply won't do the job.

I managed a tarpon last summer with only 25-pound Ande line, though that fish spooled the reel in about 10 seconds and we chased it with the boat. The darn fish wouldn't leave the school it was swimming with! I finally pried him loose, and fought him to the limits of that spin gear on a hot and glassy August day. Meanwhile the rest of the school kept rolling away on the surface, getting smaller and smaller on the horizon. If we could have landed my fish more quickly, we could have scooted and positioned our boat once again ahead of the school. To our dismay, a distant boat found the school and was soon hooked up. I'd grabbed the spin rod, thinking a long cast was in order, but the school veered right towards us, passing under the bow, about 40 fish. I simply flipped a live baitfish 15 feet in front of them, and a tarpon wolfed it down. If I'd grabbed something like an Ambassador 7000 reel, capable of 30-yard casts with 40-pound line, we'd have made short work of that five-foot fish. I haven't owned one of those reels in a long time–back in the day we used them all the time until huge tarpon and their hour-long battles ruined these reels. We also used Shimano TLD-15 reels, capable of good casts but sometimes ruinous backlashes during critical moments. Captain Curtiss Cash, who casts and drifts for tarpon off POC, uses big, quality spin reels filled with 65-pound braid line.

Anyway, we will try them again in August. Probably throwing pinfish in front of them, since that bait is suddenly plentiful this year. If you're worried about getting poked with a pinfish's sharp dorsal fins, and getting a saltwater infection, consider giving that pinfish a "haircut" with kitchen shears a popular technique.

"The huge runoff last year really hurt tarpon fishing on the middle coast. The upper coast was much more consistent. The inside bay fishery and the jetties were also blown out last year. This year could be a repeat.

"We have a new streamer tagging program (www.tarpontags.com) that is being run by our new non-profit that we recently formed to promote tarpon research the International Tarpon Conservation Association (ITCA) (www.iTarpon.org). We have not filed for 501c(3) status yet, but will shortly. The fish haven't shown up yet, as of Memorial Weekend. Currents have been running north to south until the last few days. The switch should get a good push headed this way from south Texas and Mexicoif the runoff doesn't keep them moving."