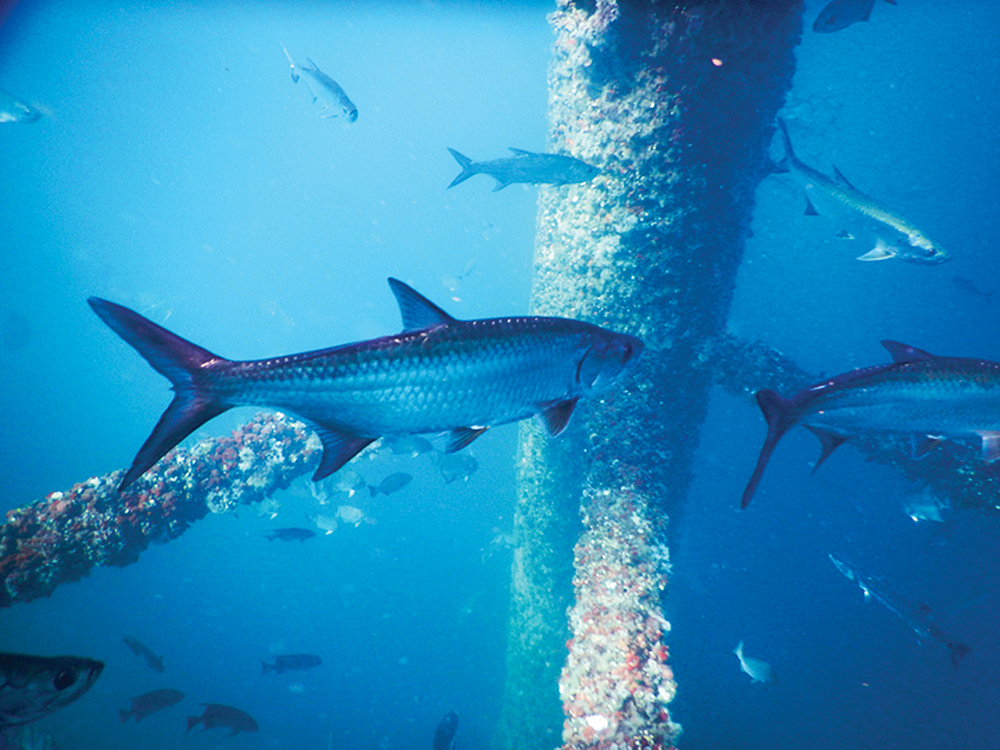 Tarpon roaming inside a Gulf platform off the coast of Port Mansfield in May. Photo by Zack Giessel.

Coastal anglers consider catching tarpon a bucket list species, a lifetime goal they hope to fulfill. For others, tarpon are an obsession and that’s all they fish for. As that hunger grows, they sometimes travel to more southern latitudes to sample tarpon action there. This is a versatile fish, found from creeks to offshore at Gulf platforms in more than 100 feet of water. When they go on a feeding rampage it’s a sight to behold, worth the long days when they won’t cooperate. And they know that August offers the best shot at Texas tarpon.

Over the years, we’ve caught tarpon offshore, at the jetties, in the surf, and while anchored in Pass Cavallo, back when it was deep and the currents strong. We put in a lot of time there and have fond memories of epic battles, with some beginning near sunset and lasting long after dark. On some trips we even spent the night in the boat, fighting big tarpon after midnight under strong moonlight. Several huge fish were finally lost that looked like possible state records.

Called the poor man’s billfish, big tarpon can be caught even from jonboats, but it takes skill and luck and it isn’t really recommended. If a big tarpon jumps in the boat, you’d best jump out, unless the current is strong – like in Pass Cavallo. I know of one trout guide who was knocked unconscious there, when a tarpon jumped into his boat as he was landing a ladyfish. There is also the tragic story of a tarpon jumping into a panga off the Honduras coast, hitting a 20-year old woman in the neck with fatal results.

Now that we’re fired up to catch a tarpon, let’s explore the options. There are different time-tested scenarios for catching these fish along the Texas coast.

Offshore tarpon. Anglers look for visibly rolling schools that rise to the surface to gulp air. Certain stretches off the coast are better, and they’re nicknamed Tarpon Alley, often in about 30-40 feet of water. If you’ve been trout fishing the surf and see a cluster of boats out there, or rolling tarpon a mile offshore, refrain from running in and trying to hook 100-pound tarpon on trout gear. It’s difficult to imagine a tarpon in deep water even responding to pressure from trout tackle, much less actually being caught. If it ever happened, you can bet the tarpon died after a prolonged battle lasting one or more hours. It would be like pulling on a big shark gone deep, with a whippy rod. More on these offshore tarpon, later.

Jetty fishing. Tarpon are one more reason why owning a cast net and knowing how to spot and catch mullet is a huge plus. Along with having a good live well. Bait shops don’t offer anything bigger than small live croakers, and big tarpon aren’t much interested in that. You want frisky baits of 10 or 12 inches long, like mullet and croaker, and somewhat smaller menhaden and pinfish, pinned live to a circle hook with 100-pound mono leader. Baits should be staggered behind the boat, often suspended under balloons. These fish can be down deep, at mid-depth in the tide, or rolling near the rocks. Small tarpon are sometimes caught deep by jetty guides anchored and waiting for redfish. Generally two or three feet long, these tarpon are very sporty on baitcasting tackle.

One can also walk the jetty rocks, a stealthy method for easing up on rolling tarpon. A quality fly rod with a butt is best; tarpon, even the biggest ones, have an affinity for small streamer flies. Hopping from rock to rock is hazardous, and we did that for many years, though we were after trout and reds on the upper coast. Landing an 80-pound tarpon from the rocks, without falling and winding up in the ER, is something of an achievement. It’s far safer to prowl up and down the jetties with an open skiff and electric motor, casting near the rocks. If a hooked tarpon decides to cruise off a mile, at least you can follow with the boat. If you’re stranded on the rocks, well, you’re spooled.

Surf tarpon are often loners, though not always. Most of these are hooked by accident, often by wade fishermen slinging spoons and plugs. If it’s a big tarpon, the results are inevitable; they can spool a trout reel in 10 or 15 seconds. However, with smaller tarpon of three or four feet, the angler has a good chance of landing it.

If you approach a tarpon school with the boat, use an electric motor that will ease along quietly. Without electric power, one can position the boat 100 yards ahead of the moving school, and throw baits and jigs as it passes by. (Spin reels will reach farther out there without backlashing; with these, try using 65-pound braided line.) Refrain from running an outboard motor anywhere near these fish. Serious tarpon anglers have switched to using diesel engines, which don’t have a loud underwater exhaust. If other boats are seriously working a school of rolling tarpon, and you’re not equipped, don’t blunder through the school casting wildly with light tackle. These aren’t bay trout. The tarpon school will dive and disappear – and from nearby boats, harsh language and cruel advice will be lobbed in your direction.

Use tackle heavy enough to subdue these fish. Fifty-pound mono line should be the minimum for fighting tarpon offshore. Don’t keep a light drag, but whip the fish in a timely fashion if at all possible. The longer the fight, the more exhausted that fish will be when released. You don’t want sharks finding your tarpon laying on the bottom.

Always use big circle hooks that will penetrate a tarpon’s jaw. Using a J-hook and possibly gut-hooking a tarpon is very likely fatal to the fish, and Texas needs all the tarpon it can get. The current population is apparently a small fraction of what it was in the 1930s.

Lip-gaffing a big tarpon and holding him vertically, half out of the water, may pop a vertebra, which can also be fatal to the fish. It’s best to take pictures of it in the water, alongside the boat, with the camera stationed up above.

Refrain from dragging tarpon into the boat. They will make a mess, and thrash their lives away in the process. These fish are strong and can’t be controlled, except with a big gaff hooked through the tip of their lower jaw. Several times I’ve watched jetty boats catch little 3-foot tarpon by accident, while they were fishing for trout or reds. Triumphant anglers land the tarpon and hold them up for photos, of course. Invariably the tarpon will jump out of their hands three to five times, slamming onto the deck. Smaller tarpon can be held up by a firm grip on the leader, where the fish can’t beat itself against the boat.

If at all possible, revive your tarpon by putting the boat’s engine in gear and dragging the fish for several minutes. While the fish rests, getting rid of built-up lactic acid, it will receive extra oxygen from water passing over its gills, greatly increasing its chance of survival.

The tarpon is a special fish, known from West Africa to the Caribbean and Central America, up our Atlantic coast to Virginia, and the Gulf of Mexico. They’re very much worth that extra effort to hook and safely release them.