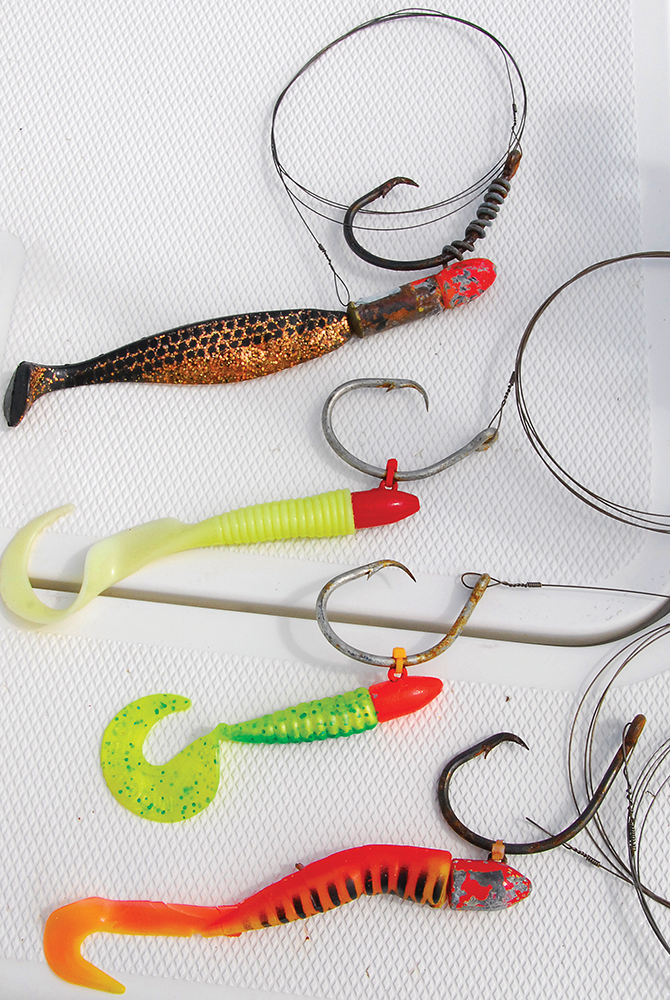 Texas tarpon can leave you feeling like “you just got your ass handed to you,” as one diehard tarpon angler told me recently. And I agreed, having seen some phenomenal days with this fish. Tarpon command much so respect, they’ve been labeled “the man in the silver suit.” There are lifelong tarpon fans out there like Clear Lake’s Tom Gibson, who retired from NASA and spent decades of vacation time hunting record tarpon from Port Isabel to West Africa. He owned the Texas record for many years and caught a few world records too. Some of the giants he caught in Africa would scare the poop out of coastal trout fishermen.

Where none have been seen, tarpon can arrive overnight in huge and hungry schools. Diehard fans are used to these erratic schedules, and disappointment, but when they hit the right day, it’s all worth it. I was reminded of this recently when, knowing better, couldn’t resist casting a spoon at a few big, rolling tarpon in shallow Florida water. And foul-hooking one, leading us a mile offshore with the boat, wasting more than an hour of fishing time. Each time the big fish gulped air only feet away, we could plainly see the spoon stuck under a massive scale. With 12-pound spin tackle, I realized we were wasting our time and the tarpon’s too, so tightened the drag and broke him off. That big fish never jumped, which is what we wanted, but it was a new lesson in the power and beauty of these fish. Every time it surfaced a few feet away, my elderly guest screamed, “Oh my God!”

There is also history in tarpon. Port Aransas and its Tarpon Motel were famous for these fish back in the 1930s and President Franklin Roosevelt showed up in 1937 to catch one. It was early in the season, May 8, and locals were worried he wouldn’t hook up after he’d anchored at the jetties and caught nothing. So, they sent two of their best fishing guides, Bill Matthews and Barney Farley Sr. to make sure it happened. In Lydia Ann Channel, they anchored up and Roosevelt caught a 77-pound tarpon in front of Life magazine photographers. Matthews went on to live a long life in Port Aransas and around January 1990 handed me his Vom Hofe reel used that day by the president. Bill kept that shiny reel in his laundry closet, in a canvas bag with other reels. I was keenly disappointed he wouldn’t sell it but it probably belonged in a museum. I hope it didn’t end up on eBay.

Enough of history; what about this year’s tarpon action? At this writing in late May, I’ve only heard one positive sighting on the middle Texas coast by Capt. Curtiss Cash, who has caught quite a few of these fish over the years. So, it’s still too early to make predictions for this year, if tarpon can be predicted at all. (They can’t). One should keep in mind that there are three key areas, or “tarpon alleys” in 30 feet of water along the Texas coast where the vast majority of tarpon are caught. The first is a stretch of beachfront from Sabine Pass to Freeport. The second would be Port O’Connor to Port Aransas, and lastly just north of Port Mansfield’s East Cut jetties down to the Brazos Santiago jetties at South Padre.

Finding schools of tarpon along these alleys depends heavily on the weather. Last year there was a spate of tarpon action in late May to early June, then a typical harsh southerly offshore wind arrived, lasting for three weeks. (My advice is to wait until July, before making a serious tarpon effort, unless you get a hot fishing report from a reliable source). Perhaps 99 percent of these big fish are caught off the beach, which can stay rough for weeks. A few big tarpon venture into the bays, but they’re shy and avoid boat traffic, especially on the weekends. I’ve caught them in the bays, but you can bet it was a quiet weekday morning with hardly a boat in sight. And the wind wasn’t howling. We used castnet-caught live mullet and hoped gafftop catfish and bull sharks would give us a break and stay away, though they usually don’t. A more reliable venue would be the jetties, where tarpon big and small hang around the rocks and out 50 yards or so.

Back in 1995 or so I put a guy named Mike Reed of Houston on a Pass Cavallo tarpon, back when the pass was deep and the current swift—not anemic like it is today. Catching that fish made an impression on Mike, and since then he’s concentrated on big tarpon every summer season. He’s spent countless hours prowling off Galveston, Freeport and Port O’Connor, searching for these fish. And will be this year.

“It's an absolute, or about 99% chance you have to see these fish, to catch them,” Mike advises. “If you’re lucky enough to catch a single, loner tarpon without first seeing them, very likely you’ve been working a current line (color change), schools of shad, or bait-balls of rain minnows.”

“Last summer towards the end of the season, late August to early September, they showed for a good month or more. One day I launched at 1 p.m. and within 30 minutes had fish rolling a few hundred yards from the boat. I moved up current, put three trolled coon-pop lures out in staggered formation behind the boat, and eased in their direction. Trolled into casting distance and 15 to 20 minutes later had landed and released a 110-pound tarpon. I called a friend in Galveston, told him I was on fish, to meet me on the beach. Thirty minutes later, I picked him up in three feet of water in the surf. Within 45 minutes we were on another group of slow-rolling tarpon. It didn't take long before I cast to another taker. Unfortunately the hook didn't stick, so it was one landed and two hooked that day. We had scattered rolling tarpon for a couple hours afterwards, but couldn't find a taker.”

“Further down the coast, POC got hot a few times. We had a five-fish hook-up at once, landed two and popped one line trying to untangle them. Warren Cloves, my fishing partner, had just mentioned we were getting our asses handed to us. (We were in hundreds of fish and struggling to get a taker). After the five-fish hookup and a 3-ring circus, I had to agree.”

Mike has advice on proper tackle and etiquette, fine-tuned after many hours offshore. He would emphasize that electric trolling motors are the key. If you approach a tarpon school with an outboard motor, they will very likely dive and disappear for hours. Use a strong electric motor with multiple batteries that can hopefully keep up with these traveling fish.

Mike: “I use a 36-volt (Three Optima batteries) with a Great White electric motor mounted on the transom.”

“You don’t want to run a big outboard motor within 200 to 300 yards of these fish. If another boat is working them, add another 100 yards or more to that. I'm using 40-pound test for my mono rods, and 65- to 80-pound test for the braid reels. I prefer 80-pound braid because it's thicker, and more durable from fraying. I've got one Calcutta 400 reel, it won't hold enough 80-pound line, so it’s loaded with 65-pound braid. I'm using 100-pound mono leader, but a lot of guys use 150 or 200-pound mono. Big circle hooks, of course. Most serious guys will have nine or more tarpon rods loaded and ready, when the action heats up, because there is no time for fooling with tackle, as the bite can be short-lived.”

“Standard trolling is six lines free-spooled between five and 30 seconds behind the boat, or basically staggered from directly behind and below the motor to about 40 yards back. My closest line just behind the motor is typically my hottest. We mostly use coon-pop jigs because of a better hookup ratio. They can also be cast at rolling fish.”

Every angler should have a tarpon on their bucket list of life’s goals, it’s just that some guys want an entire list of tarpon in their bucket.