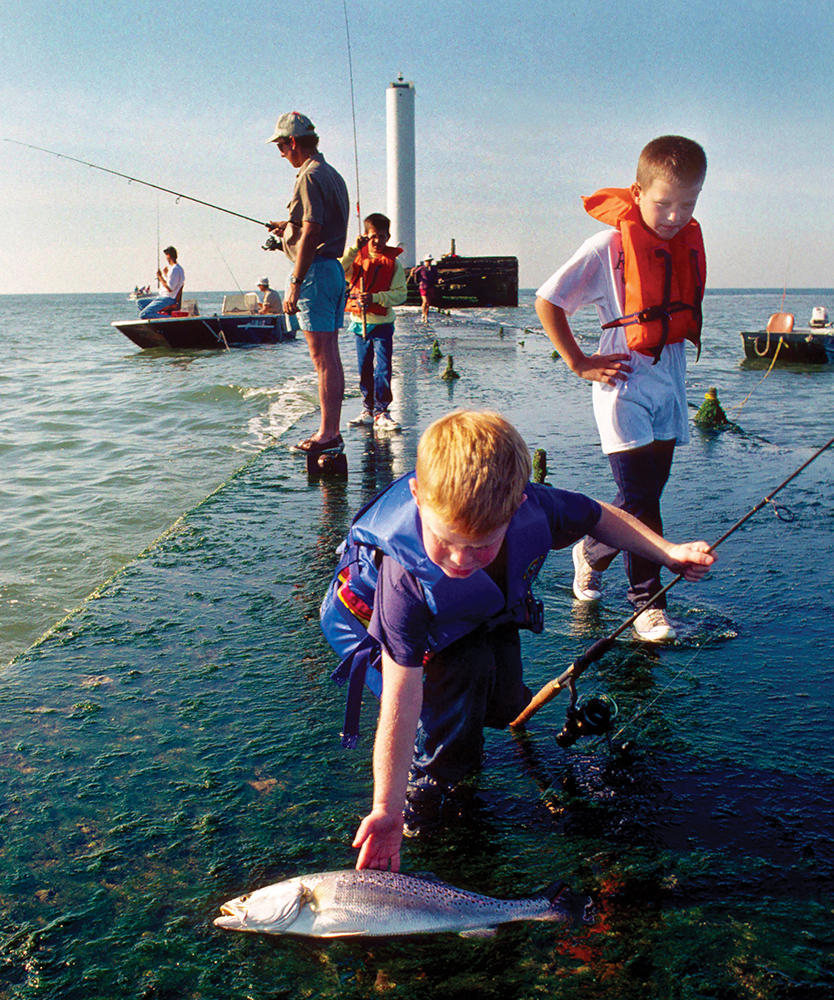 Sabine jetty on the Louisiana side, where we misspent our youth.

Coastal Texas has the finest collection of rock jetties in the nation, built for pedestrian traffic. With one exception: the Sabine “west jetty,” offering a sketchy hike and murky water. Two hundred yards away in Louisiana is the “east jetty,”  reachable only by boat. That Texas side provided our first-ever experience with  hiking jetty rocks a quarter mile offshore. That trip was in January and we only went because the local fish report claimed a boat had caught 50 redfish out there. (No limits back then.) My brothers and I struggled out there a good ways, caught no fish but at least got the lay of the land at an early age, before straggling back. That experience delayed any future plans, but within four years we were jetty regulars—using small boats to reach prime water before climbing onto the rocks for, typically, six hours of plugging.

In the decades after we plugged the rocks from Sabine to South Padre, starting out from shore, or anchoring a small boat way out there and then hiking the rocks, fishing both sides. That foot mobility was great and highly recommended, if you can judge rock angles and surfaces without a miscue. All it takes is one good slip to spoil the day.

These granite rocks are huge artificial reefs, with Galveston’s the longest. Coated with barnacles, algae and oysters, jetties give cover to everything underwater from shrimp to trout, redfish, sharks and tarpon. Above water, one will see many birds and even occasional rats that live below; hard-bitten survivors that scavenge anything edible. And for years, at the end of the Matagorda jetty, there were sightings of a raccoon, bleached orange by the sun, ugly as a chupacabra, grabbing napping pelicans and dragging them below…I wouldn’t want to camp on those rocks without a .380 automatic. Twice we camped on the Sabine jetties, and were kept awake by a full moon and passing crewboats. But at dawn, two Igloos full of trout.

Rock walkers have an advantage over boaters, in that quality fish are mostly within 50 feet of the rocks. On most days, our casts were made at 10 to 45 degree angles, instead of straight out, unless mackerel were present in more open water. Walkers must be patient, one step at a time, lugging their equipment and watching for fishable water. If they can reach green water, that’s gravy, but often they have to settle for murky water close to the beach—at least on the upper coast. An incoming tide helps, of course, pulling in clean water from the Gulf. However an outgoing tide on the channel side of the rocks has provided lots of action.

Texas jetties are built differently depending on where you are: Port Aransas rocks are smooth enough to pull a wagon mounted with rod holders, taking a load off the shoulders, and jumbled boulders offer pools for stringered fish. South Padre is rounded and capped with poured concrete, where anglers might slide into the water. Galveston and Matagorda jetties are boulders laid carefully together, with cracks and gaps running every which way. Some stretches at Sabine are noticeably more awash these days.

I always considered the last 100 yards of a jetty as prime turf; it’s first to receive clear water from the Gulf with much more tidal action. It’s true they have the roughest water, but they hosted the most fish traffic. It’s a great ambush point on the outgoing tide, with trout and redfish waiting for outgoing bait schools.

Another time-honored spot is the “safety cut” in the Sabine and Galveston jetties, built for small boat traffic. Water flow through these cuts attracts gamefish, though close-quarter boat traffic is relentless on weekends. The remaining Texas jetties can all be hiked from the beach out to the very end.

It should be noted here that walking the jetty is not for the ungainly. It’s a high- energy environment with unforgiving rocks, compared to a public bay pier. You need a good sense of balance, and the ability to swim could even come in handy. If you have medical issues, stick to piers and levees where help is nearby. Way out there on the rocks in a medical emergency, hitching a ride back to your car may not be an option if a friendly boater isn’t nearby.

Years ago in summer we fished countless afternoons. Action might be slow, followed by frantic evenings with trout herding showering baitfish against the rocks. We’d make little 20-foot casts with MirrOlures, rear back and drag about 60 trout onto the concrete wall. (Never used a landing net.) Several times, crew boats raced by, heedless of their wakes that soon washed dozens of loose trout back in the Gulf. Our Spanish mackerel sank instantly but the trout floated, and we dog-paddled after them in 30 feet of water, rounding up the biggest first.

One evening at sunset we had two-dozen trout on the stringer, and sharks showed up, four- and five-footers that were soon tugging on our fish. (Not a good place for fish stringers). It was getting dark and time to go, and somebody had to swim out to our empty anchored boat, 50 feet from the rocks. Since it was my boat, I jumped in and cleaved the water in record time, vaulting into Old Yellow in one smooth motion. It was a 15-foot bow rider Thunderbird ski-boat bought used at Toledo Bend, that would see countless jetty trips.

We also used aluminum jonboats around the jetties, since scraping a rock was no problem; just ease in close, unload gear (including anchor and ourselves) right on the jetty, and shove the empty boat back into deeper water. And keep an eye on it, if the wind shifted.

Green water is the ticket; if the water resembles chocolate milk, fish elsewhere or switch to live bait. A small castnet might save the day; there are plenty of baitfish around the jetties in summer, often on the surface. And live shrimp on the sand bottom, though 20-30 feet further out. At the short rock groins along Galveston’s seawall, the sand bottom is close to dry rocks and big, fine live shrimp are easy to catch there in summer. (Park in front of Gaido’s Restaurant.)

Tackle. We still like to sling artificials all day with baitcasting tackle, spooled up with tough, 20-pound Ande line. Our personal preference, after making countless rock-bound casts, are gold spoons. Snags are inevitable, but as one learns the underwater terrain, it gets easier. Lighter spin gear with 12-pound line is fragile around rocks and the sharp marine growth. Hook a decent redfish, and it will dive deep; good luck stopping one with light spin gear. Even a good trout can brush a rock at close quarters, cutting the line.

If the water is too murky for artificials, sometimes we’ll rig up a pop cork with live bait, and walk it down the channel side of the rocks during an outgoing tide. No need to toss it out more than a dozen feet; gamefish feed close to rocks. Our only live bait for many years was caught out there with a castnet. If you can buy live shrimp, it’s easy to toss them out from the rocks weighed with only a tiny split shot weight.

Heavier tackle baited with say, a mullet head can be tossed far from the rocks, or fished under a cork or balloon. Bull redfish and large, black drum lurk on the bottom. On the surface, it’s mostly sharks and big, 20-pound jacks that hit artificials. Just don’t chase a hooked jack on the rocks—that’s a heartache waiting to happen. Better to break it off and re-rig.

Jetty shoes: Having the right shoes is imperative—shoes you’re used to, since the day is spent calculating where to put that next step. The angle of that next rock, slippery or not (wet algae or dry), stepping over cracks that are five feet deep. The only time I was ever hurt, I was wearing borrowed shoes on a last-minute trip. Over the years I favored old-fashioned high-top Keds, made of canvas.

Fishing Gloves. Wish we’d had those gloves 40 years ago; it would have saved trips to the ER. Stumble on jetty rocks, pitch forward, and the worst injury is to the hands. Today I don’t fish without gloves, anywhere. Avoid thin nylon gloves and use sturdier versions with leather sewn to the palm.

5-gallon Bucket. This is a mainstay for fishing trips, used for carrying needed items including a castnet (even live bait, with a Mr. Bubbles attached on top). And to carry keeper fish, for that hike back to the truck. Some jetties, like the north Aransas jetty, offer protective saltwater pools between the rocks, handy for stringers. Others, like South Padre, don’t and a bucket is much needed. Catch a few baitfish, and keep ‘em alive in the bucket. It can make a difference. If the fishing is slow, it can be used as a seat. If a jetty has a smooth surface, some folks today use wagons rigged with rod holders.

Landing net. We never used a landing net out there, just slid fish onto the rocks with an incoming wave. Some fish were lost, of course. The rather steep South Padre jetty would be difficult to land good fish without a net. Timing is everything, and you don’t want to slip in the excitement. When a fish is tired, time that next wave to hoist him ashore.

Dress for a harsh environment. There is zero shade when fishing the jetties; you have to make your own. Protect yourself from cruel rocks and sun with long sleeves, long trousers and a broad-brimmed sun hat.

Vest for carrying tackle. If away from your bucket, wear a vest and travel light and fast with an assortment of spoons, jigs, plugs and fish stringer. Treble hooks in shirt pockets will get prickly.