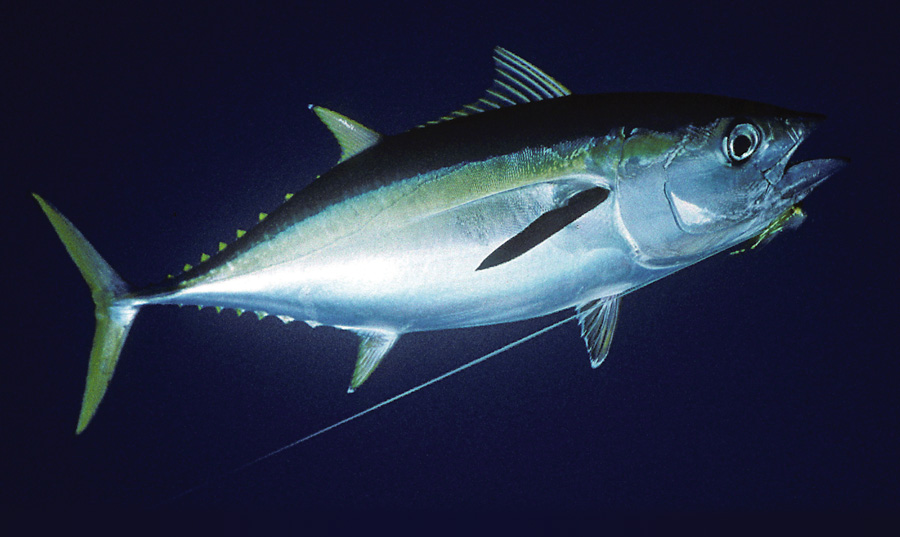 Underwater shot of a yellowfin tuna.
A number of Texas boat crews watch and wait each winter for precious weather windows, hoping to make that long run off the Texas coast for tuna. Each crew is exposed to the elements, but they know by now that the deepwater Gulf platforms out there host thousands of tuna.

How to get there? The big center consoles are faster and wetter, but sleeping under the stars while their buddies gaff tuna isn't for everyone. (We may assume here that many of these diehard center console guys are somewhat younger, say in their 30s). Bigger billfish boats are a little slower, though some today are quite speedy for their size, and each can handle a sudden, ugly weather change without soaking the crew. There are also a couple of big, 100-foot catamaran partyboats, based out of Galveston and Port Aransas that can stay on tuna for several days.

The main target is prime yellowfin tuna, with a trip limit of only three fish per angler. However the more plentiful, smaller blackfin tuna up to about 20 pounds have no limits. There are also plenty of bonus fish species available, even during winter, including wahoo, amberjack and a dozen species of grouper. All of this potential adds up to a serious offshore run for fine-eating fish that are hungry during winter. The main obstacle is that they're way over the horizon. Catching a weather window is the key and the ticket, the difference between glumly turning back in crashing blue seas and whitecaps, or hitting a potentially flat-calm Gulf full of hungry fish. Tuna feed off the Texas coast all year, but they hit better when the water temp is cooler than summer, and that makes later autumn, winter and spring the best. In Texas, it's all about the weather. If you can get out there, you're going to catch a pile of tuna.

One boat making the tuna run these days on a regular basis is the 54-foot Bertram Paparda Rey out of Freeport Marina. I talked to captain Ken Doxie about their tuna trips:

"We try to stay out there two or three days at a time, it's nice to have a roof over your head, and a dry bunk at night," says Doxie. "Or during summer having AC, after fighting tuna in hot weather. We don't have a typical departure schedule (like leaving the dock on Saturday morning). We watch for weather windows, and I have a few groups of fishermen who are on constant standby. If a window somehow arrives on a weekend, then we would actually leave on a Friday night. (Presumably as a norther peters out with a light north wind and following seas). These weather windows sometimes don't last long, and it's nice to be out there during their entire duration.

"The typical tuna bite is from dark until 10 p.m., and then even better from 4 a.m. until first light. They feed under the big deck lights on the deepwater platforms. When the sun comes up, the action slows fast and most anglers want grouper and tilefish back inshore. Or troll for marlin."

Indeed, it seems like someone always catches Texas' first blue marlin of the year in January.

"For tuna, we have to be prepared," Doxie says. "We catch blue runners on the way offshore. Once in deep water at the platform, we use long dipnets to catch flyingfish that swim right up to our lights. (Or even fly aboard). There are nights when only a flyingfish will work on tuna. Other nights, you could catch tuna on a hot dog. You never know, so we bring a variety of tuna baits.

Doxie's anglers also catch blackfin tuna, and use some of them for chumming up bigger yellowfins, a technique called chunking. It's bloody work, filleting tuna and cutting them into small chunks, but someone has to do it. The smaller blackfin tuna are more of a coastal pelagic fish in shallower water than a yellowfin prefers, though they mix. Blackfins can even be caught behind anchored shrimpboats in blue water, while the yellowfin is most happy in water miles deep. The blackfin will hit diamond jigs, and the occasional yellowfin will grab on too, and that's always fun. Plenty of Texas anglers have caught feisty bonito (little tunny) in the five to 10-pound class, a small tuna that never gives up. Imagine fighting endless 20-pound blackfins at night, and then the 50 to 125-pound yellowfins. The bigger don't give up easily, and they're much bigger than beach-running bonito. Yellowfins will pull drag for hundreds of feet, even a thousand, often diving straight down after getting stung by a hook. This ain't perch-jerking on the Angelina River

"What we typically see, though not always, is bigger blackfins inshore, and smaller six- to eight-pounders in deep water," he said. "Last year we saw a lot of stud blackfins in the 20-pound class that kept us real busy."

"Off Freeport there are four or five deepwater rigs from roughly 110 to 135 miles out. Also a semi-submersible called West Capricorn. And a drill ship inshore of it, called Santa Ana. Just unbelievable tuna around there, lots of lights on all that equipment, attracting tuna."

Blackfin tuna are none too choosy and in my experience we always had plenty of action. We just tied our boats, in different years a 23 SeaCraft and a 26 Mako, to one of the deep platforms, and cast out frozen cigar minnow with kingfish tackle. Fought as many blackfins as we could stand, before taking a break. But catching yellowfin tuna requires a bit more refined technique on some nights.

For one thing, try bump-trolling a frozen ballyhoo behind the boat. Let out 50 or 100 feet of line on two rods, and ease the boat around to the side of the structure where white water is flying, from tuna busting the surface. When you see yellowfins jumping, or blackfins flipping end-over-end like footballs, that's a good sign. Ease in there with the boat, and hang on to that rod! Better yet, leave it in the rod holder and use circle hooks. You don't have to set a circle hook, the tuna takes care of that when he hits.

"Flyingfish are the primo bait, however, and it's getting close to a sure thing if you can set one out behind the boat," says Doxie. "These baits are so good, even a chewed one can be set back out on a hook. Or even one removed from inside a tuna while gutting it."

Topwater baits: "We typically don't cast, but leave a floating popper behind the boat, and move the boat off a ways. Then work that popper real good, as we ease along. Setting it out means we don't have to worry about treble hooks flying around in the boat, or getting snagged in someone's ear. (These guys are a long ways from the nearest Doc in the Box). We use different kinds of poppers. Our boat owner Randy likes to use spin tackle with them. He likes the big topwater poppers with rattles and a bucktail. He says a bigger lure lodges sideways in a tuna's mouth, restricting water flow, and that makes the tuna give up sooner."

"Tuna don't typically jump and miss a topwater lure, like kingfish do back inshore," Doxie says. "However, tuna will blow up on those lures, somehow missing them, fast as they are, until one connects. It's pretty cool. Our biggest topwater tuna weighed between 120-125 pounds. (That's a serious topwater strike). And it gets pretty exciting, when a gaffed tuna with a big treble-hooked plug lands thrashing on deck."

They've had no injuries from tuna to speak of, though four years ago their mate Jeff Irwin received a 12/0 single marlin hook in the cheek and out through his chin, while unhooking a barracuda. But that's another story, saved for a rainy day.

"We get some fishermen who have never caught tuna, but they're sure enough experienced when they return to the dock. The trip limit is three yellowfin tuna, so we generally always try to limit out on them first, before going after something else."

Next big option out there, with considerable dependability, is deepwater grouper.

"After tuna, we hit a few deepwater grouper spots. It's hard to believe that you can keep more big grouper than you can red snapper. A few years ago I would have bet anything I owned that there would never be a limit on triggerfish, much less a closed season. It isn't just weird, it's piss-poor management. Anyway, we don't fish the permanent, deeper Gulf platforms for grouper, it's too easy to lose your gear. Although we might try for scamp grouper in 200-400 feet on the way back in. Our best deepwater grouper spots, mostly for yellowedge and snowy grouper, are rocks in 600 to 750 feet. (Neither species grows nearly as big as the troubled Warsaw grouper, with a current trip limit of only one fish per boat). Our best yellowedge drop and catch was the day we cranked up a double-header, and each fish weighed 25 to 30 pounds. Caught from a small rock that was marked by a friend who was billfish-trolling, one day. There's a lot of little spots like that in deep water, that may have never been fished.

"So, on tuna trips we have to be prepared for everything: live baits caught back inshore, catching blackfin tuna, then chunking some of them. Casting or dragging frozen ballyhoo baits behind the boat at night. Or dip-netting flyingfish. Topwater popper plugs, or using diamond jigs straight up and down. And then deepwater grouper fishing. And the tuna action varies from one year to the next. Two years ago was tough, but last year was very good and a lot of tuna hit the dock."