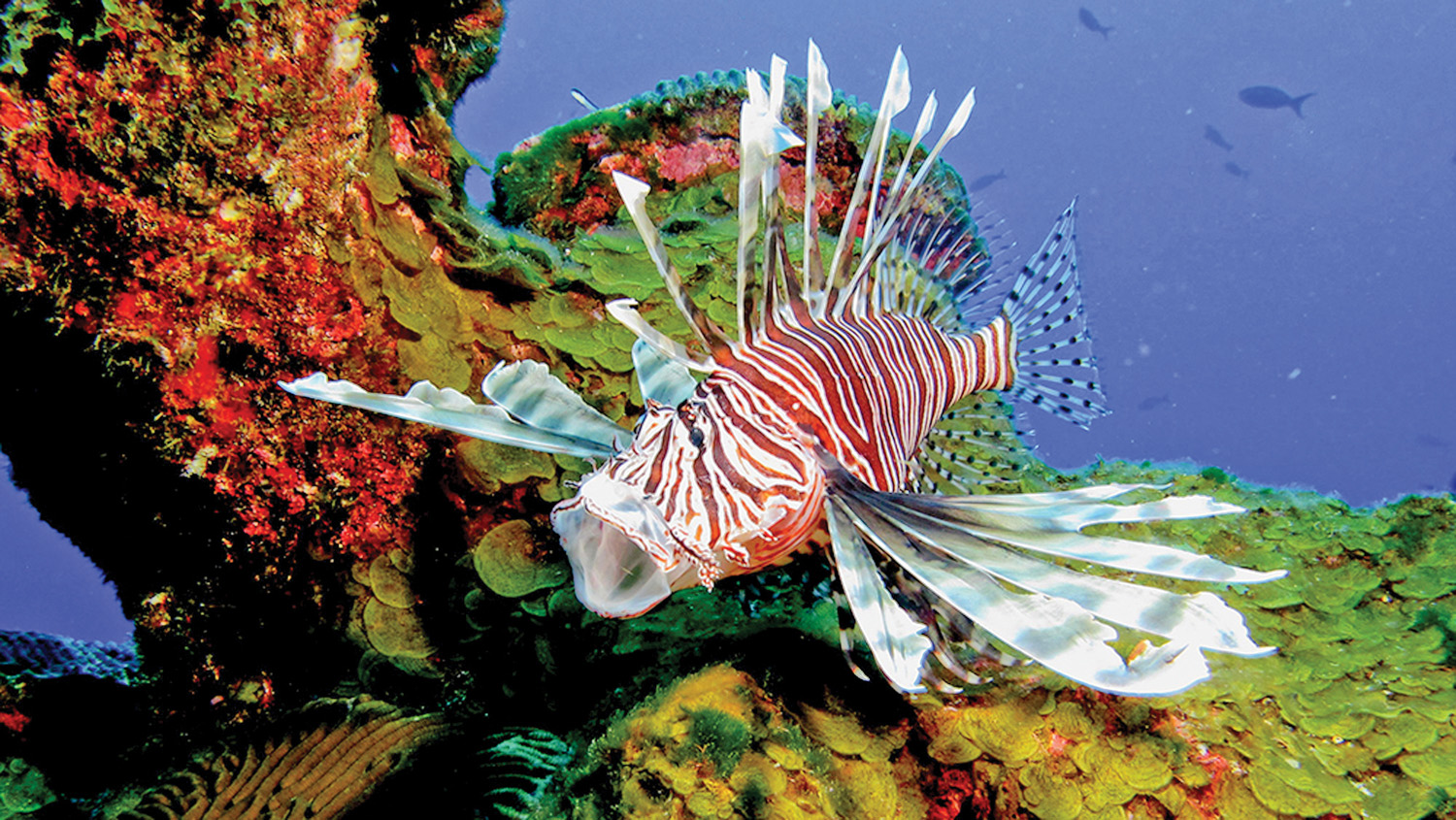 Lionfish are able to gulp down prey half their size. Photo by NOAA.

Lionfish are fairly new to Texas coastal waters, first sighted far offshore in 2011. But after invading the entire Caribbean and Gulf of Mexico, they’re increasing in our coastal waters. It’s been called the fastest invasion of a new marine species that man has ever seen in the Atlantic, a true monster of a fish. Their size is fairly small, but they could easily be renamed “goblin fish” because they are seriously bad news for our native fish. Years ago they were colorful aquatic eye candy brought here from the Pacific, compliments of the powerful aquarium industry. But now they’ve escaped. According to DNA tests, less than 10 of these fish were introduced to local waters around Miami only a few years ago. And now there are millions reaching from New York to Venezuela to Texas.

Having looked at their increasing numbers and fertility rate, I have a phrase for this fish when I encounter them: Terminate with extreme prejudice. They spawn every few days, and their floating egg sacks drift and spread in the currents for a month or more. They’re voracious and will eat anything in front of them that will fit, including small fish, crabs and shrimp. They can live in shallow boat canals behind homes, out to 1,000-foot depths. They’re often caught in baited lobster traps, but will seldom eat cut bait used offshore by bottom fishermen. A few have been caught with live bait, however. So, standard fishing gear hasn’t put in a dent in their numbers.

This is a voracious reef fish and that means our rocks, reefs and wrecks offshore, oil rigs, artificial reefs and even the jetties have already seen them. One Texas diver reports that he now sees a few of them at every offshore rig he dives. Native Gulf fish living in all these places have no defense against this Pacific predator, because they haven’t evolved to evade them. Scientists say adapting to lionfish could take centuries or longer. Small fish are cornered by the lionfish’s many long fins, of which 18 are as venomous as a stingray. They can eat half their weight and their stomachs can expand to 30 times normal size.

So, how to harvest or better yet, wage war on these alien invaders? On the positive side, these fish are dumb as a bag of hammers. They can be speared at point-blank range with a quick-firing pole spear, ideally fitted with a short, multiple-tined barbed spearhead. A special holding chamber called the Zookeeper, similar to 10-inch PVC pipe, has been designed to hold dozens of these fish; you simply spear and stuff them in this hollow pipe, which takes only a few seconds with practice. Speed and efficiency is important for divers restricted to a single tank of air during a typical half-hour dive. Large gatherings of a hundred or more lionfish have been wiped out at some Pensacola artificial reefs in only a half hour. That’s where they have little room to hide and make easy targets over sand bottom.

On another positive note, they’re quite tasty on the table, better than snapper. A commercial fishery has started, supplying lionfish fillets to restaurants, and one can support that fishery by ordering a plate. With no bag limit, you can fill large coolers with these tasty fish. However, spearing them is the only present method for controlling them. How many Texas fishermen are willing to jump overboard and go hunting? Our jetties are murky on most days, or limited to a few feet of visibility. This puts us at a disadvantage over Florida’s clear and very often, calmer water. Florida has already held numerous local roundups, where thousands of lionfish have been harvested in a single day. But these fish will never stop arriving and eating, unless a specialized virus takes them out.

As mentioned, lionfish are quite fond of artificial reefs; there are YouTube videos of more than a hundred lions on one small concrete pyramid with no other small fish in sight. Bigger amberjack and triggerfish did not seem to mind them, though they compete for the same food. It’s ironic that, just as Texas has recently begun building artificial reefs, that lionfish have arrived at the same time. What is needed are our own scuba teams who will hold roundups and clean out lionfish from these sites. One Florida diver compared lionfish roundups to beach cleanups, where you periodically have to “take out the trash.”

As for me, I’m sharpening my pole spear and will soon be checking several jetties and a couple of offshore rigs. I have more than 20 years experience diving with a pole spear, though not so much in recent years. However, during one trip not long ago, we were at Andros Island in the Bahamas. It was a fishing trip, but I made time to explore the tidal creek behind our motel when the tide slowed each day. I found maybe 10 lionfish hiding under mangrove trees or around rocks, and wasted them all with the spear, before cutting them up to feed the other fish. Working around all those venomous fins, I wore protective gloves and carried a long fillet knife to cut them up.

If only 10 or fewer lionfish started this invasion, imagine if alert divers had knocked off most of those early fish. There is a story from the early days of the invasion, when a small population was found near a popular dive center in the Bahamas. The owners supposedly protected these lionfish from harvest, using them as an attraction for divers who, “didn’t have to visit the Pacific” to photograph these colorful fish. We can surmise the local attitude changed as small reef fish, even valuable reef cleaner fish, disappeared. Another easy meal for this voracious predator.

What are we supposed to do with an invader that spawns up to 50,000 eggs every few days, all year long? Native fish mostly spawn once annually, though our seatrout are also batch spawners (a good thing).

If you catch a lionfish, maybe while using live bait at the jetties, or diving, and are stung, apply hot water as soon as possible, just like any stingray wound. For those who are hunting lionfish underwater, I would advise keeping a coffee thermos of hot water nearby. Lionfish venom is protein-based and breaks down rapidly in hot water.

Lionfish are here to stay, but I like to think that wiping out all that we can will delay or cut back on their numbers, in some small way. After all, just one female can lay millions of eggs. We don’t want to see herds of these fish at the jetties, boat canals and oyster reefs in the bays, do we?