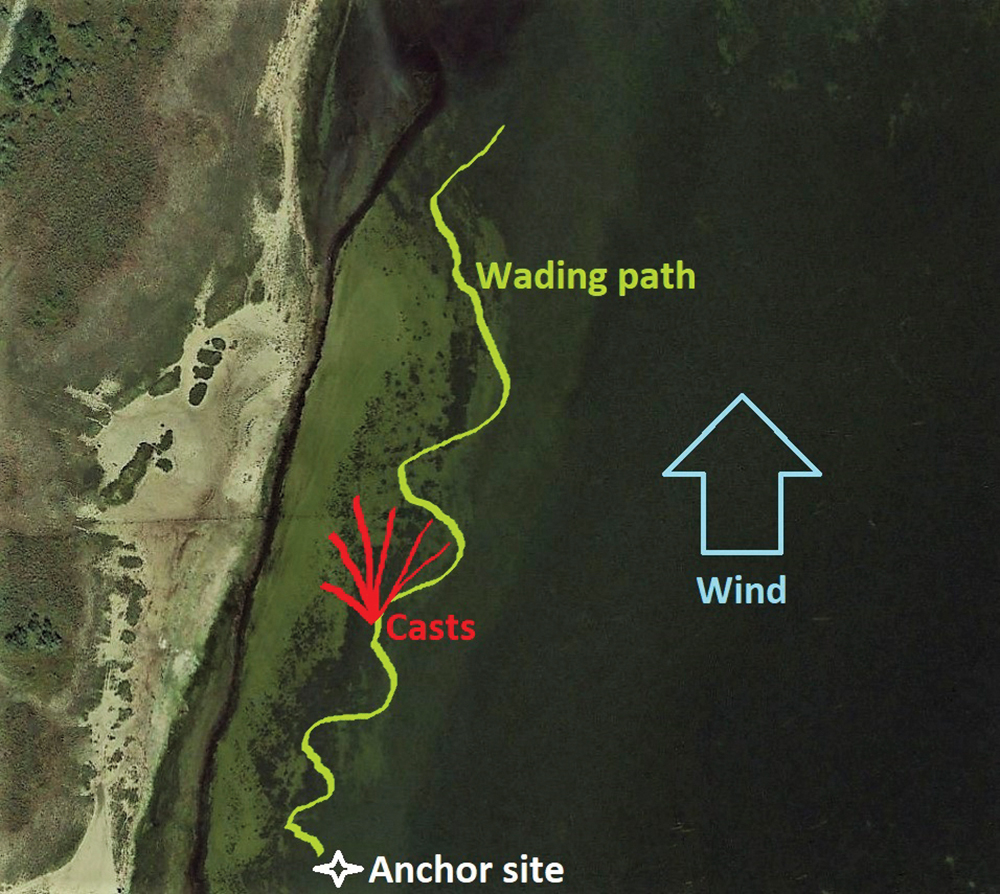 This graphic illustrates a basic wading plan for targeting the mixed sand and grass areas along a shoreline, one where the angler walks with the wind, weaving toward and away from the shoreline, casting in multiple directions all the while.

Lure chunkers need to believe ample numbers of fish swim within their reach in order to perform with the proper mix of patience and confidence. Knowing plenty of fish swim and feed actively in a small space simplifies things significantly. In a perfect world, one can identify a spot holding schools of feeding fish, then stand still and repeatedly present lures to them.

Of course, the world is far from perfect. Often, anglers don't know exactly where to make a stationary effort. Fishing aboard a moving platform provides one way of dealing with this dilemma. Consequently, many folks fish from a drifting boat, covering large expanses of water, hoping to contact fish as they go.

Others choose to wade through the areas they target, either because they enjoy the freedom and control gained by getting in the water, or because they have a strong belief in the presence of fish in the area. Waders generally cover relatively small pieces of water with some sense of purpose, probing them thoroughly, trying to determine which specific parts hold fish.

Whether one works from the deck of a boat or by wading, pace of movement plays a significant role in determining the level of success of an effort. Boat-bound anglers acknowledge the need to control pace of movement in a variety of ways, sometimes employing devices to accelerate or decelerate forward motion.

For instance, while drifting to cover water, saltwater anglers in Texas often use a drift sock to slow the boat's pace of movement. If wind speeds ramp up over fifteen knots, some will deploy a second sock to fight back against the forward thrust of the breeze. Conversely, if dead-calm conditions prevail, many use a trolling motor's whirling blades to generate some movement.

These compensatory measures don't allow for as much precise control as those available to wading anglers, who depend less on the mercy of prevailing winds. At a basic level, wading allows for more stealth and complete coverage of an area, without as much direct influence from weather conditions. Of course, this assumes a wading angler consciously adjusts pace of movement in response to the needs of the moment.

Ironically, or perhaps predictably, many novice waders behave as though they don't accept or understand the need to adjust pace of movement in response to various aspects of the situation. Typically, most of them embark on a wade making steady, medium-paced forward movement, without speeding up or slowing down, until some barrier (like deeper water or a shoreline) prevents them from continuing.

A more thoughtful plan involves moving somewhat quickly away from the boat at first, to exit the area most negatively impacted by anchoring and disembarking from the vessel, then slowing down some. The proper pace then depends on the pertinent variables affecting the situation, but normally involves moving no more than a few, maybe ten or twelve yards, every five minutes or so, while making several casts and complete retrieves. When moving at this pace, anglers should remain cognizant of the need to make casts toward all fishy-looking parts of the area. This almost always dictates casting and even moving in multiple directions.

Many anglers who fail to appreciate the importance of pace of movement also fail to acknowledge the strong influence direction of movement exerts on productivity. Often, novice and beginning waders proceed directly downwind, casting downwind all the while, working only a narrow corridor of water in front of them, without regard for the layout of the area. On average, they strut too quickly through the space, further limiting the ability to probe all parts of the terrain thoroughly. Stronger winds blowing on the backs of the anglers increase the negative impacts of these flawed behavior patterns.

Strong winds can influence waders in the same way they do drifters, pushing them forward too fast through an area, especially when waders show low levels of awareness of the need to adjust their pace. Savvy anglers consciously fight against this tendency when waves slap their backs, partly because they recognize the importance pace of movement plays in facilitating adequate testing of lure choice and presentation, and partly because medium-strong winds generally increase the effectiveness of sideways presentations.

Executing some presentations becomes much more difficult when the angler tries to walk and fish at the same time. Consequently, some anglers, especially those attempting to master the use of new types of lures, should stand still while actively deploying the lure on each cast, moving a few steps between each cast.

In a worst-case scenario, lack of confidence in a lure and/or specific presentation causes the angler to stand still too much, essentially stopping and fishing in the same place for too long without sound reasons. Worse, some waders stand still because they don't understand which direction to move, how fast to move, or even that moving slowly and steadily generally works better as a starting point for a wading excursion, regardless of time or location.

The size and type of area dictate the magnitude of proper initial pace of movement in a significant way. When targeting fish over a large area, like a flat adjacent to a shoreline, for instance, anglers should start by employing a medium-fast pace of movement. Certainly, the precise speed should take into account the season, meaning warmer weather generally dictates a faster pace of movement than colder weather.

In warm weather, lures presented quickly, on or near the surface, generally work well, allowing one to make a relatively high number of casts and retrieves per minute. Covering an area thoroughly while deploying these types of lures in this way does not require moving at a snail's pace. Conversely, cold weather often demands working lures low and slow, on or near the bottom; this cannot be achieved while the angler races through an area like a thoroughbred trying to win The Preakness.

Regardless of the season, when an angler chooses to fish a small spot, like a patch reef on a shoreline, a set of rocks lying adjacent to a sand bar, or the crown of a spoil bank surrounded by deeper water, a slow pace of movement makes more sense than a quick one. If the angler believes the targeted fish possess a positive feeding attitude, either because of the influences of tide cycle or moon position in the sky, or in response to observations like the presence of nervous bait, popping slicks or other visible signs of feeding activity, the pace of movement should be steady, and medium-slow, at least until bites begin to happen.

A fish biting the angler's lure legitimately and instantly reduces the proper pace of movement to zero. A bite occurring in a particular place correctly instructs the angler to make more casts into the place. At the most basic level, the ease with which waders can repeatedly cast to a small area in which a bite has occurred elevates the effectiveness of wading over drifting in most cases. Especially when targeting fish around rocks, reefs, grass beds and other structures, making multiple casts to micro-spots within the area often produces the best results.

While bites come at an acceptable rate, anglers should reduce the pace of movement to zero, whether their casts deploy the lure in a recognizable sweet spot next to a rock or reef, or in a part of the area without any obvious, discernible feature. When steadily catching fish of an appropriate size, anglers should stop, stand and fish. Amazingly, many novice anglers don't, and they wind up marching to and through the fish they find.

Anglers who do stop and fish after they begin getting bites will eventually need to adjust their pace of movement upward, when bite frequency wanes. Doing so in an optimal fashion usually means resuming movement with a slightly slower pace than the one used prior to the interrupting bites. I call this “getting a new piece of water”, and accomplish it by slowly moving forward or sideways, so my casts start landing in untested water, eventually stopping if bites happen, or accelerating gradually if they don't.

Sometimes, properly resuming a moving effort means walking fairly quickly to another part of the area with a similar feature to the one which produced recent bites, then stopping again and standing while making repeated casts to determine whether the new spot holds fish. In extreme cases, wading anglers might adjust pace of movement dramatically, by getting in the boat and racing to another spot with similar features some distance away, then repeating the wading plan in the new place.

More often, short moves made with the feet present new opportunities for wading anglers. As long as the perceived biting mood of the fish remains at a medium to high level, waders should walk slowly around and through an area, targeting all likely fish-holding spots, stopping and fishing hard when bites occur. In cases where the perceived biting mood of the fish falls low enough, a different reality comes into play.

If earning bites becomes tough enough for long enough, a wader should target fish in a small space, one strongly believed to hold fish. Such a spot might be a grassy edge, a sweet set of potholes, a muddy hole next to a reef, any place where the angler has caught a large number of fish on previous occasions. By choosing a micro-spot during a slow bite, the angler elevates the effectiveness of a key component in the catching puzzle--experimentation with lure choice and presentation.

When testing these aspects of the effort, any angler would always want to believe the experimentation occurs in the presence of fish. So, walking around at a medium pace and covering lots of space while dabbling with lure choice and presentation during a slow bite makes no sense. In the toughest bite scenario, one needs to know a lure likely lands in close proximity to a fish in order to properly assess the efficacy of the lure and its movement pattern.

Ironically, then, stationary fishing works best when the bite rate falls near zero, just as it does when the bite rate reaches its highest point. At all points in between, some ideal pace of movement prevails, dependent on the perceived potential for bite-rate and the size and type of area selected, in a world more favorable to the tortoise than the hare.