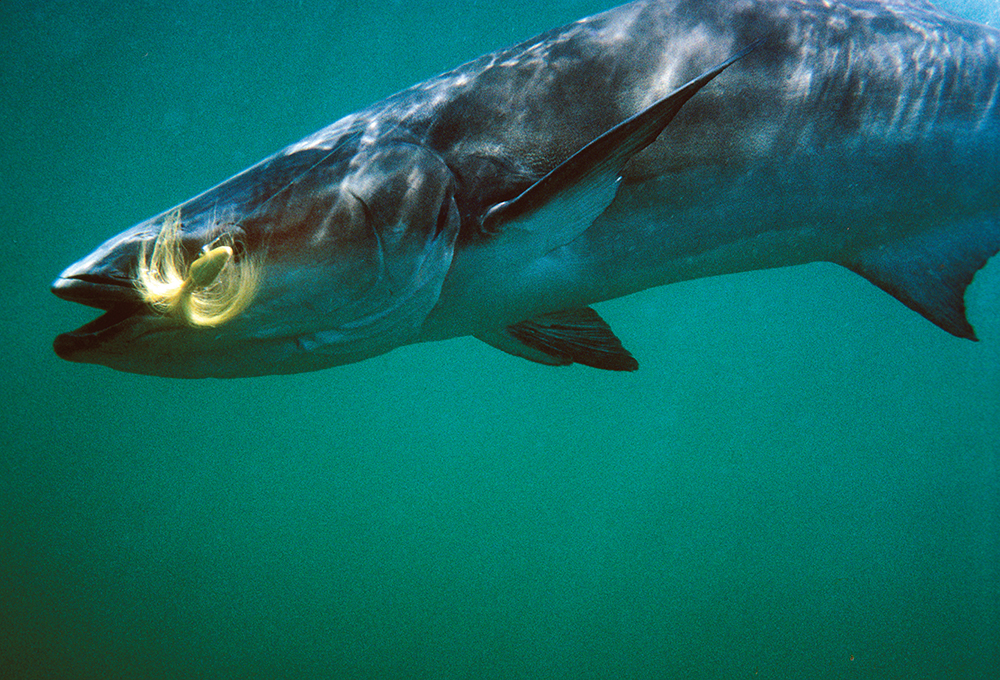 April marks the start of cobia season off the Texas coast, and this time of year, “they’re hungry,” as the saying goes. These early-season fish haven’t seen a hook since last year, and they’re easy enough to fool, and very aggressive at times. They’ll even grab a hooked snapper or any small fish struggling in the depths. Small snapper aren’t legal as bait, but there are plenty of substitute species out there, that a cobia will consider. Here are some favorites from over the years:

Pinfish are a feisty baitfish with lots of energy, caught inshore around the docks. Lob a frantic, tail-hooked pinfish a few feet in front of cobia, and that’s pretty close to a sure hookup. Pinfish are spiky, but that long row of sharp dorsal fins can easily be trimmed with scissors, a process called giving them a “haircut.”

These “pinnies” are readily caught with a castnet, but they’re also caught with tiny hooks and scraps of skin from baitfish or shrimp. As a side note, one of the marinas in Port O’Connor has been saving their biggest pinfish for a local offshore charterboat, whose captain uses them for cobia, kingfish and big snapper. I’ve seen that boat unload a lot of big fish.

Marsh minnows. If there is one thing that lights up a cobia, it’s a hard-wiggling live bait. I’ve seen cobia completely indifferent to dead and artificial baits, and then the first lively critter tossed their way is scarfed up. This includes the tiny marsh minnow, (see also mud minnow – gulf killifish) a few of which can be kept in a small bucket of water all day.  One calm day we were a few miles off the beach in a jonboat, fishing a platform visible from land. A circling 20-pound ling refused all offers, until I dug around in a coffee can (space is critical on such a boat) and pinned a small hook to a marsh minnow. (I was using jetty tackle with 20-pound line). This tiny baitfish, best used on flounder back in the bays, promptly drove the cobia crazy. The marsh minnow darted and dodged and even hid in my lower unit, but the cobia finally caught him—while we watched, spellbound. The fight was anticlimactic, after watching the show.

Squid. We use smaller white, Gulf squid to tip bucktail jigs, and toss them at visible cobia. If the jig sinks deep, it tempts these fish at mid-depth, drawing them to the surface. The squid’s tentacles dance behind the jig. We use white or yellow jigs of one or two ounces, depending on current speed. The jig also has action if you work it right, and the squid adds flavor.

On overnight Gulf trips, squid will approach any lights and they can be caught with a dip net. And then you have some really fine, fresh bait that no cobia can pass up. Just remember, those puppies bite. Or pinch, anyway. I’m talking about the squid.

Cigar minnows and Spanish sardines. The latter are often sold as the former, but the cigar minnow is the real deal. When caught live, they have very firm flesh and will really stay on the hook. The sardine is softer, even mushy, but if that’s all the marina has, several five-pound frozen boxes may be the only choice. It beats running the boat offshore with no bait.

These two baitfish, when thawed, are commonly used during summer, and probably score on cobia best when fishing around anchored shrimpboats when the season begins in July. The common technique is to approach an anchored boat, preferably with its deck lights left on, which indicates the boat anchored before the sun came up. Which should mean they’ve been dumping bycatch in that one spot, chumming up all sorts off offshore predators.  Stop the boat at the shrimpboat’s stern, and idle or cut off your boat’s engines, drifting away with multiple baited hooks in the water. If a cobia is idling in the boat’s shade, it should come out to investigate or better yet chow down on a free meal. That is, if it hasn’t gorged already that morning.  Check out the afternoon shrimpboats, they may harbor cobia recently arrived that haven’t eaten yet.

I’ve hardly fished the Atlantic at all, but after many years of Texas cobia, I somehow caught my biggest in the Atlantic. We’d tied up to a buoy offshore a week after a September hurricane, the water now glassy late in the day. We kept seeing cobia passing by about eight feet down. They wouldn’t hit a jig, but I lowered a Sabiki rig and came up with the biggest cigar minnow I’d ever seen, it looked eight inches long. Quickly transferred to a casting rod with 40-pound line, I lobbed it out there, where the baitfish promptly dove, pursued by several big cobia. After a 10 minute battle, my buddy green-gaffed the fish near the pectoral fin, apparently hitting its heart, a lucky break because it could have pulled the guy overboard. The huge fish partially straightened our three-foot gaff, and later at the dock on marina scales, it weighed 80 pounds even with the tips of its tail still touching the dock.

Ribbonfish. These are bought in packages, preferably arranged flat and with their sides still a shiny silver. Rig them with two hooks spaced a foot apart and toss them out weightless behind those anchored shrimpboats. They’ll slowly sink deeper, prime bait for kingfish but also cobia. Fresh ribbons are caught each summer in Moses Lake (use gold spoons) and the Port Aransas docks at night. Big, quality ribbonfish are also caught during July/August in Galveston harbor, by shrimpboats.

During one August kingfish tournament, we were ready to return to Galveston after three days in a 21-foot boat. We had our big kingfish, enough to win, but at noon were still anchored out there in blue water. A circling cobia grabbed our last ribbonfish, and we were duty-bound to land and release that fish, without leaving hooks and wire leader attached to him. It was probably the only time we were annoyed at catching a 50-pound cobia, which required time, effort and care in not getting injured. But we managed, without anyone ending up in the ER. Then we sped away to Galveston Yacht Basin and the winner’s circle.

Menhaden. I’ve mentioned before what a great bait this is for many offshore fish. Cobia are quite fond of the oily “pogie,” probably because of it’s high-oil content. When these baitfish get soft and mushy, they can be used for chumming purposes, calling up fish from down-current. They can be chunked on a cutting board, which I’ve done for hours, or ground up into mush. Also purchased as pure oil, which can be slow-dripped overboard, creating an oil slick that calls up all sorts of offshore critters.

We have bought our pogies from bait stores on the coast, caught our own with castnets, or boarded shrimpboats—picking and choosing the best of their bycatch. In Sabine Pass, we’d buy hundred-pound boxes of flash-frozen pogies, which lasted three days offshore.

A quick rundown on other cobia baits: Old-timers favored using hardhead catfish for cobia bait, though I’ve never tried it. Clip off the poison spines and set the catfish out there with no weight, let him swim around, and cobia wolf them down. Or so say anglers from back in the 1950s and 60s. Which proves cobia will eat just about anything.

In the Eastern Gulf, serious cobia fishermen really favor live eels. They’re about 18 inches long and, when lip-hooked and tossed in front of passing cobia, get slurped like spaghetti. Cobia are so fond of eels, even a plastic imitation works quite well.

When offshore, almost any small, fresh and lively fish will suffice for cobia, if you’re quick enough to toss it out there in front of passing fish without backlashing.

For instance, during one Galveston tournament, we were supposed to bring in a combination snapper, kingfish and cobia for weigh-in. On the last day, however, we had no cobia. On the long run back to port we spotted a lone, anchored shrimp boat in the afternoon, no signs of life aboard. We eased in close for a look, and a 40-cobia came out and circled our boat, hungry enough to eat lots of leftover chum. However, it wouldn’t touch anything with a hook attached. (Typical late-summer cobia).

In the live well, we had exactly one six-inch banded rudderfish we’d caught from a weedline, using light tackle. Problem was, our only dip net had disappeared off the transom the day before. I could not grasp that slippery rudderfish, in five minutes of grabbing. However my buddy did grab it, pinned it to our biggest rod, and the cobia exploded on that frantic baitfish. Hours later and back at the dock, we’d somehow won another tournament.