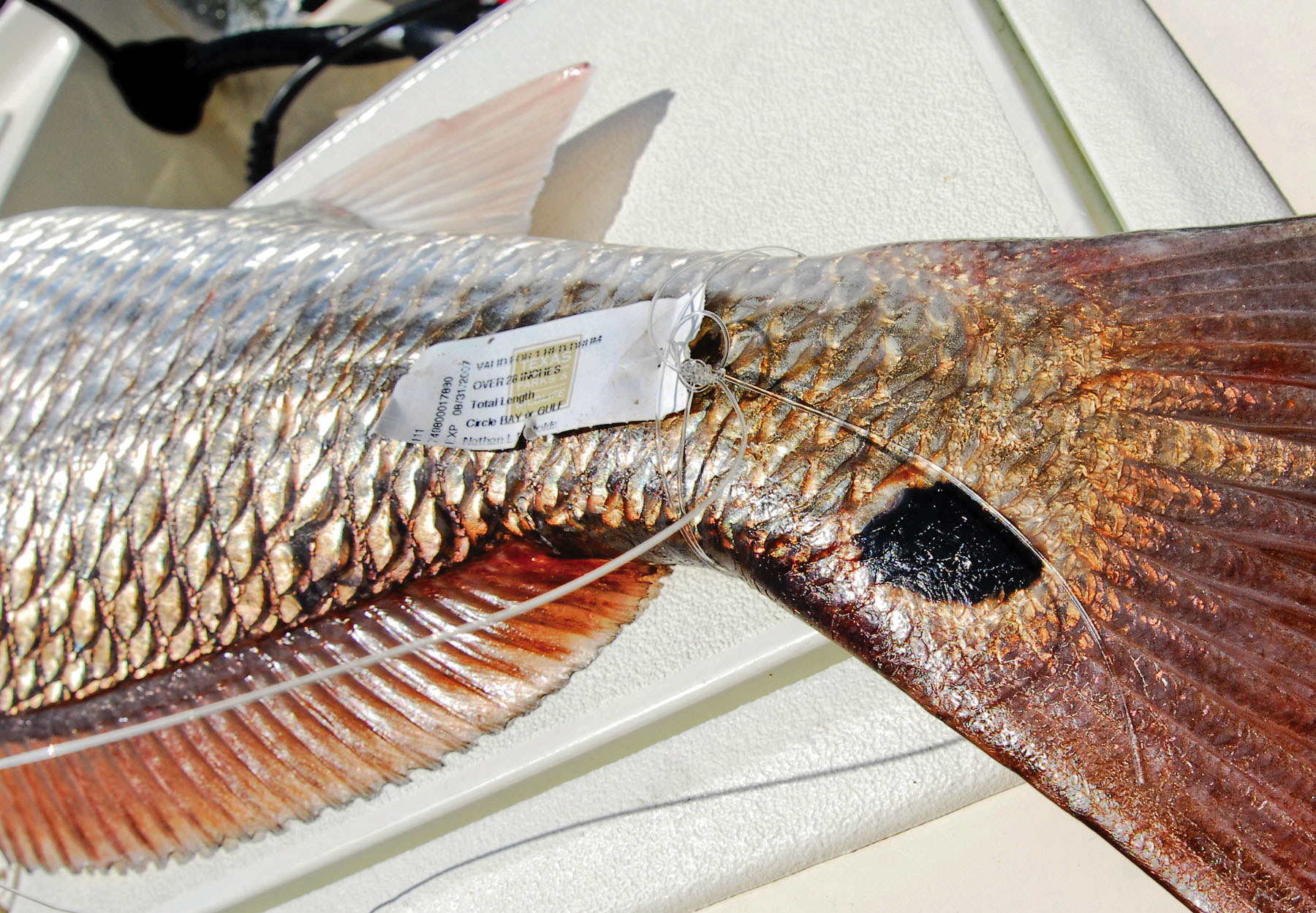 Tagged, 31-inch redfish invited to a dinner party that night.
Murky coastal water looks unsightly, but it does hide the fish. It also provides ample plankton for baitfish and shrimp, while curtailing constant harvest from above. Scenic green water has eye appeal and sight-casting and the fish can easily see a lure, all good things. But murky water may be the reason the upper Texas coast from Galveston to Sabine Lake now has the healthiest population of trout on the coast, since the bag limit is still 10. The Trinity and Sabine Rivers often deliver big shots of fresh, murky water–but in these times of frequent drought, lower and middle coast anglers may become envious of the upper coast.

It's just different fishing, in southeast Texas. Here, burning a shoreline with a new, high-tech boat, looking for fish, won't work. Wade-fishing is tougher, the bottom often too soft and the gators nosy. A little wind can turn the water into chocolate milk. But the fish are there. Flounder aren't impacted by clear water gigging. Redfish on the upper coast are schooling by mid-August on the surface in 8-10 feet of water, blasting baitfish through November.

The trick to finding these upper coast trout and reds during autumn is watching for birds that have sharp eyes and the advantage of height. In our youth we used to chase the birds on Sabine Lake day after day with a bass–boat and late each night, eyes shut tight, you still saw black silhouettes of hovering, dipping seagulls. Back then it was all trout from two to four pounds, I never witnessed a school of reds on top. Today, redfish make up half the surface action on Sabine, and they're tackle busters. Years ago we fished with tandem rigs and often caught two trout on a cast. That would be foolish today, when two reds will destroy almost any tandem rig. (Been there, done that).

How to fish these birds? There are things to watch for, and proper etiquette after finding a school of fish. One potlicker can put a school down, drawing the ire of nearby boaters.

A couple of my high school buddies from Port Arthur have been working the birds since 1970, and I often return to fish with them.

"These electric motors really help us keep up with a traveling school of fish," says Mike Cichowski. He unhooked another small "rat" redfish and tossed it overboard, as we drifted along. "They also don't seem to spook the fish. Some people don't understand that you need an outboard to get within range of a school in the first place. We've seen boats stop more than 200 yards from a school, deploy their electric motor, but never manage to catch up because they're on the back side of the school. If the fish are moving along at a decent pace, an electric motor won't keep up, especially with a brisk wind blowing or a little tidal current. These troll motors are really helpful on trout schools, because they spook much easier than redfish."

He went on to land several slot-sized reds in the next hour, some with beautiful dark copper color, different from most reds on the middle or lower coast. The opposite of stopping too far from a school would be running right on top of the fish, a common thing years ago, but on this day we see six boats on the horizon, and every one has an electric motor. You can't really see the fish, but have to develop a sense of where the fish are going, often marked by the swoop of a bird, a jumping shrimp, or maybe a single swirl.

"One problem with electrics and redfish is the speed of these fish," says his fishing partner, Bud Reynolds. "A redfish school can really travel and you have to literally chase them down with the big motor. It's pretty delicate to position yourself in front of a traveling school and keep from running right through the fish. Boat and fish converge too quickly, often without you being able to see the fish. Most boat operators haven't mastered that yet and end up sending the fish down. On the other hand, an inexperienced fishermen may get a little overzealous and insist on racing up to the schools.

"Troll motors are a good tool, but I think courtesy helps more than anything," says Reynolds. "If a boat is already on a school, the next boat to come up should wait his turn and fish behind boat number one. If that isn't acceptable, it's okay to motor several hundred yards in front of the school, shut down and wait for them to come to you. Boats shouldn't be within casting range of each other."

"Binocs are a must and the higher quality, the better," says Reynolds. "Sometimes there may be one bird over a whole school of fish. I've also seen fish schools without birds, just whitewater and wakes cruising the surface. You have to use binocs; each day we usually drive the boat a couple of miles, then stop and look. It's amazing how many times you see birds or surface action through the glasses, where nothing was visible to the naked eye. If you don't have binocs, you'd better have an 18-year old with you who still has real good eyes."

That little GPS dome on their boat's dash helped us start out in the right spot each day. An X marked the spot on the plotter from the previous day, and we often returned there for another drift when action slowed with the birds. In murky water we bounced scented worm jigs on bottom, picking up occasional fish until another flock of birds were sighted. The sun grew hot and the morning boats were gone, so we stayed near the X and waited. The morning's scattered ladyfish and small trout now turned into sizeable fish, perhaps because of an increasing, outgoing tide. These bigger fish were in the same spot as the previous day in nine feet of water, scattered over several hundred yards. The presence of three or four hovering royal terns (normally not the best bird species to depend on, because of their plunging dive into tiny baitfish) was enough in this area to further our catch of keeper fish.

Baitfish Basics Both Cichowski and Reynolds agree that jumping young ribbonfish are a very good sign. "These young ribbons are at least a foot long, and that means bigger redfish and trout close behind them. Tiny glass minnows are also good, however. When predators are feeding on them, the showering bait can be seen from a distance. The only drawback is that glass minnows are favored by ladyfish. That isn't always bad; fishing around feeding ladyfish will almost always lead you to a pocket or school of reds or trout. A bait fished deep or drifted behind the boat under feeding 'ladies' will usually hook a redfish. Action is a little slower, but at the end of the day this technique can net you a limit of nice reds," says Mike.

"The favorite bait of schooling redfish, in schools of a hundred or more fish, has to be menhaden, which we call pogie or shad," says Reynolds. "When the big reds get together, they blow the pogies 3 to 4 feet out of the water. It's an awesome sight to see baitfish flying above whitewater. It's worth going out three or four afternoons in a row and getting skunked, just to find that one school of redfish behaving like that.

"Redfish usually start schooling in mid- to late-August," added Reynolds. "Earlier in the summer there may be a couple of reds mixed in with the trout schools, but usually you can't find just a school of redfish until August. The reds will stay together in schools until a big weather change from either tropical rains or later, a big norther (usually around Thanksgiving). As the season goes on, the groups of redfish get smaller. In November a flock of seagulls may be over just three or four redfish. In January you may see a couple of seagulls over a single fish."

Bird is the Word Reynolds has a few observations on bird behavior around schooling fish.

"Both the royal tern and smaller terns indicate bait on the surface," he says. "I've found that if birds are staying in one spot, game fish are pushing bait to the surface. If the terns are traveling, it only indicates the general presence of baitfish. The best bird sign for redfish is a couple of seagulls hovering over a spot. The gulls will be at least 10 to 20 feet above the water and occasionally will dive down. There may be only one gull. Over trout, the gulls will be working close to the water with their feet constantly clutching for shrimp. I've even found trout under nothing but a few small "liar birds" [which are tiny terns that dive, but constantly disappoint anglers). The way we find good fish is to look for hovering terns, rather than those constantly 'dipping' the water at random."

Pretty fine action, for the murkiest section of the entire Texas coast.