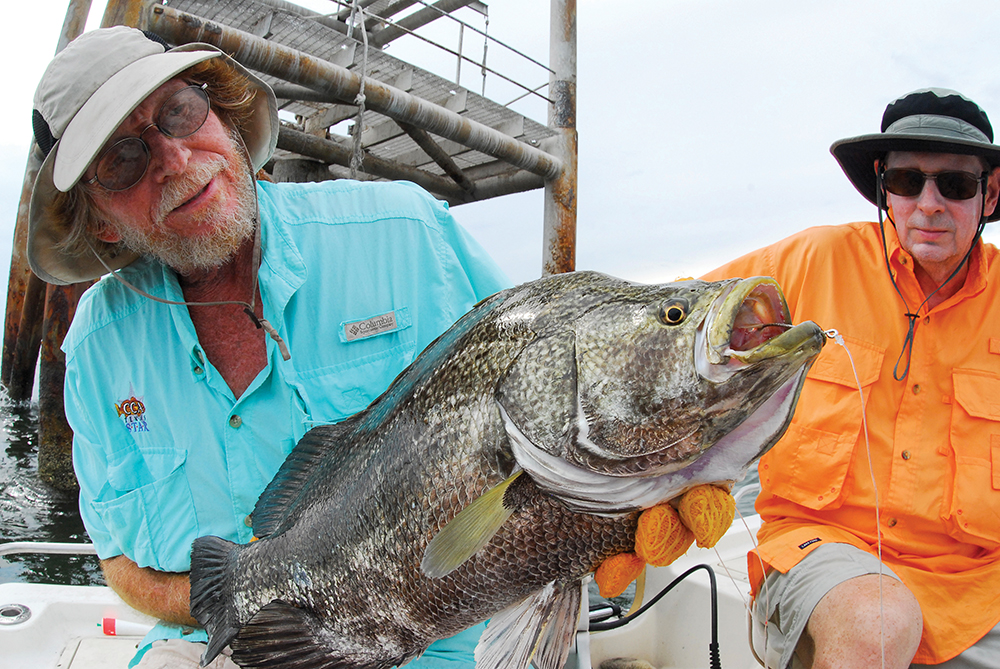 Pete Churton and his brother Bruce admire a keeper tripletail.

Tripletail are pelagic fish, found far offshore in sargassum weed lines, but they arrive in Texas inshore waters each summer. Mostly encountered at the surface, around floating objects, loitering and waiting to ambush small prey that happens by. Even a 20-pounder can be found with its face near a simple crab trap buoy. Of course, structure that breaks the current is better; day marker navigation aids, posts and buoys can attract several fish.

Sabine Pass easily holds more tripletail than the rest of the Texas coast, and while cruising just offshore there in August, it’s wise to keep a lookout for surface fish. Any shallow water gas production platforms will attract them, and that’s where I used to photograph them (when I didn’t mind jumping in the water and being wet all day). Matagorda Bay also has a plentiful summer population, for reasons unknown.

Spin tackle will get the most out of a fight with a tripletail, but it’s wise to use this gear in open water around weed lines, floating debris and crab buoys. Around solid structure, like a heavy buoy or small Gulf platforms, these fish will dive around or through structure and easily cut the line. In these situations, it’s more practical to use heavy baitcasting tackle and a stout rod. At times we’ve been unable to stop them with 30-pound line, when fishing bottom 20 feet down with live bait. To pull big tripletail out of structure, I’ve heard of people using Ambassador 7000 reels filled with 40-pound line. While not as smart as grouper, tripletail will certainly sprint into available cover if the notion takes them. Other times, they might head off into open water, jumping, and that’s really something to see, however rare.

Such was the case with my first tripletail back in the early 1970s; we’d climbed up on a gas platform, doodle-socking up and down with jigs and spoons, for trout near bottom. A big fish hit and took off, jumping about 25 yards away, and kept going. We dove into the bass boat and followed. Using our standard red reel and 20-pound line, I brought the ponderous fish alongside, landing a fine 22-pounder. If memory serves, it hit a white bucktail striper jig.

Each summer we’d ease the boat up to numerous gas wellheads, casting around them, going deep with jigs and spoons. Once, on the bow of a jonboat we’d launched in the surf, I hooked a 12-pounder from the boat’s bow and jumped from seat to seat towards the stern, horsing the fish away from structure. The fish took off at a 90-degree angle, straight away from the boat. With a tight drag on the reel, I was caught between boat seats and was yanked overboard, fighting that fish underwater…eventually handing the rod up to my buddy, who subdued it.

Landing a tripletail is best done with a big landing net. A small gaff may bounce off the fish. A small landing net can lead to comical errors, like the time a Port Arthur friend could only get half the fish in the net. The angler set his rod down to help land it, the fish woke up and bolted, and the rod flew out of the boat…Angler jumped overboard after the rod, which only left a trail of bubbles, of course. Imagine losing a 15-pound tripletail at boatside, and your favorite fishing rod. Dog-paddling in the water, there was screeching and harsh language; as Hunter Thompson would say, it was an ugly thing to see, and nothing to be done. It was all recorded on cell phone video, but so far my friends haven’t uploaded to YouTube.

A word of caution: triples have very sharp spines like a sheepshead. You don’t want to hold one up for a picture and have it wiggle loose, dropping it on your bare leg or foot, which I have seen done, with grim results. The gill plates are sharp, and it’s advisable to use at least 20-pound fluorocarbon as leader. Back in the day we always had good luck with 20-pound Ande line, which is also hard to cut.

Texas has a fairly recent bag limit of three tripletail per angler. For many years there were no limits, until word got out the fish were out there, and locals around Matagorda Bay began abusing the local fish population each summer. I know of two older Port O’Connor guides who did so, returning with what looked like 50 or so tripletail covering their boat’s deck during summer, with no ice. They did this repeatedly. In 2009 one of them told me how they accomplished such a feat, but I won’t repeat it. It was legal at the time, but conservation and ethics of marine resources doesn’t even register with some people. Apparently other boats were doing it as well, from other corners of that same body of water, which seems to be the only reliable Texas bay tripletail prowl.

Today the minimum length allowed is 17 inches, which doesn’t provide much of a fillet. Like sheepshead, smaller tripletail don’t have much meat. Better to release smallish tripletail, since they can grow to 35 pounds.

Tripletail may look slow, but they save their energy, much like a flounder. One day at a big weedline offshore, I watched a tripletail of about 10 pounds, lying next to a floating tree lodged against the sargassum weed. Around it swam a dozen banded rudderfish, which looked like tiny amberjack about six inches long. They swam past the stationary tripletail, and wham! In the blink of an eye, the tail of a rudderfish was wiggling back and forth, poking out of that tripletail’s mouth…it’s speed was impressive. These offshore weedlines are complete ecosystems for many juvenile fish species, and tripletail are there to help themselves.

Back in 1983 a Matagorda guide put his client on a new Texas state record tripletail. That June I rode around with the guide, (his name now forgotten) and we drove around checking crab trap buoys that afternoon, without luck. Records now show that a 33-pounder is the current state record, caught in June, 1984. Either it was the same fish registered a year later, or two record tripletail were caught there during back-to-back summers. The bay was quiet in those days during mid-week, not another boat and the guide, once back at the marina on the Colorado River, plunked down $10 worth of quarters and went to playing Pac Man without even saying goodbye…well, it was a different time. Twenty years later, tripletail were hounded by considerable boat traffic and, without bag limits, took a serious beating. Texas Parks and Wildlife struggled to provide scientific information on this rather unique and mysterious fish; hard science was required before establishing size and bag limits. It finally happened, and none too soon.

These fish prefer small crabs, shrimp, and fish. Baits that wiggle the hardest are best. A sturdy marsh minnow of 3-4 inches would be great. No tripletail would turn down a free-lined live shrimp or one suspended under a cork. A small blue crab will do, and also the (easier to catch) fiddler crab. Anything lively and small should work. Tossing a castnet around marinas or boat ramps can provide enough bait, if you have a livewell on the boat.

Think small, because these fish have a rather smallish, gulper-type mouth with fine little teeth made for gripping. A crab imitation fly is said to work well, because they love crabs. A DOA shrimp may be ideal because it sinks slowly and no tripletail in his right mind would turn down a shrimp. With a heavier jig, one would have to “high-stick” the rod to keep a jig or spoon at the surface where most of these fish are caught. A single-hook jig seems to work better than a spoon with treble hook. Recently I was tossing six-inch twister tail worms and lost a 15-inch tripletail—the worm was bit off just behind the hook. I let the next fish, identical size, take it and turn away, and caught that one. So, a 6-inch bait is a bit large for these fish.

It’s a different ballgame searching for tripletail but catch one and what a feast you will have on the dinner table; far better than any trout, redfish or flounder.