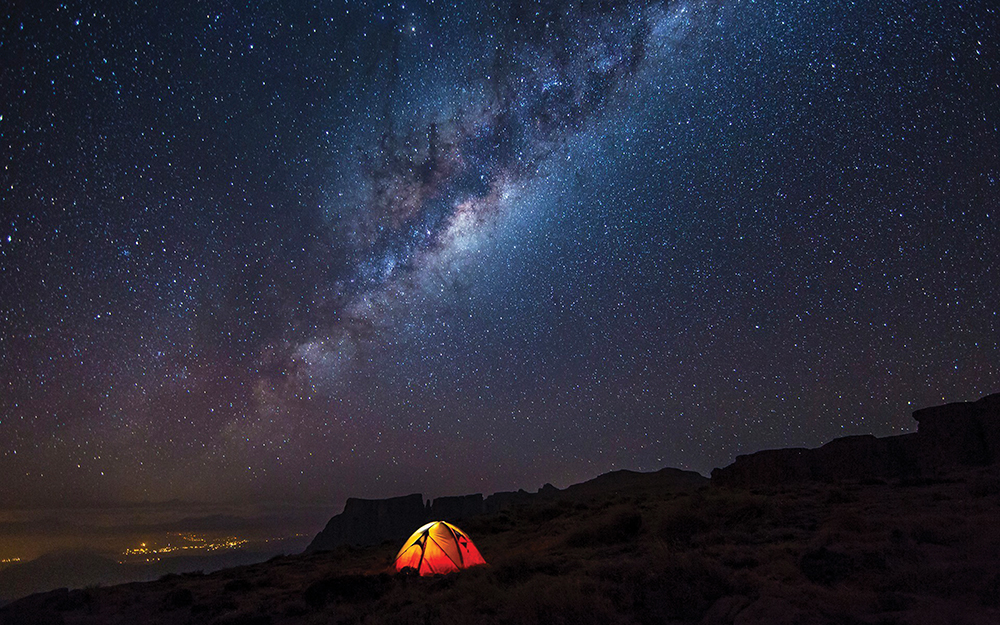 To view the Milky Way during a campout, one should put a few miles between them and city lights.

The most memorable trips I’ve ever taken, usually while fishing, happened in remote areas far from city lights—where the stars really came out at night, adding to the overall experience. When the Milky Way spanned the sky.

As it turns out, I’m not alone. People actually miss seeing the stars at night, which is part of our heritage. In recent years, many have been signing up for a new type of vacation called “astrotourism.” The term means “more intentional travel to places with dark skies and more visible stars.” Places like Chaco Canyon in New Mexico, which has a small observatory and a park ranger’s lecture under the nighttime sky. Great for camping with hardy kids who don’t mind the desert, and far from any paved road. The International Dark-Sky Association, in its 30-year history, has designated 63 International Dark Sky Parks. Chaco has made the list.

One of my best trips involved crossing the Gulf of Mexico on a 56-foot Bertram, from Playa Del Carmen to Port Aransas. Incredibly, the Gulf offered only ripples and wavelets the entire way, and this was in June. We ran the boat at only eight knots or so for better mileage, to make it more than 700 miles without refueling. We kept trolling lines set out except at night in open water. It was a four-day trip that allowed us to swing along the coast of Louisiana, fishing their deepwater platforms, loading up on tuna at night. It took eight guys to keep the boat running smoothly and safely, 24 hours a day. Each night the Gulf became very dark with little or no moon. We only saw one ship.

Most of the crew, good people from Port Neches and Bridge City, were comatose in their bunks by midnight. However two of us, older guys with more Gulf experience, were assigned the graveyard watch from 2-6 a.m. serving as lookouts, because our boat was set on auto-pilot. Overhead the Milky Way grew brighter and soon spanned the sky. On the flying bridge speakers, after midnight, our daytime Marty Robbins ballads were replaced by solemn piano music. Imagine crossing a flat Gulf under a billion stars all night with piano music. Incredible. And we weren’t about to nod off. When dawn arrived we were stoked and didn’t wake the relief crew. I set out two rods off the stern and bingo, had a blue marlin hooked up in five minutes, and then it was all hands on deck for the battle. Our groggy captain said the marlin must have stalked us for part of the night, to hit so quickly in open water before sunrise.

I’ve since read that the best time to observe the center of the Milky Way is during summer solstice in June, and in southern latitudes, so that may have magnified what we saw during that trip and several others.

Next was Venezuela. Down in the tropics, hot jungle air rises and forms serious thunderstorms. However, their dry season is different. One November we were camping in one of Venezuela’s national parks near the Columbian border. Sleeping outside in hammocks, which takes a little practice. The air was clear both day and night. The nearest electricity was in a small town about 75 klicks away, and so the countryside was very dark once our generator was turned off. Around midnight I walked into a field and sure enough, without a moon the Milky Way crossed the sky. Those perfect nights of camaraderie and steaks twice daily only balanced what was likely my best fishing trip ever. Great wadefishing, and we had it all to ourselves. Each day, peacock bass crushed our lures, even feeding like tuna at mid-day in the oxbow lake in front of our campground. The Cinaruco River was back in the woods, where a horde of monkeys howled at midday for no reason. After decades of fishing there, our hosts were nonchalant, while we three gringos could easily have stayed another week. We wade-fished barefoot with piranha (should have brought wading shoes), freshwater stingrays, and killer bee nests up in the trees. Never did see their anaconda snake, the world’s biggest. Their Orinoco crocodile was “just about poached out.” None of us suffered a scratch.

A few years before that, Miss Amy and I were on Blackbird Caye, about 30 miles offshore of Belize City. It was another dark of the moon trip. Back then the island was a retreat with just four palm thatched bungalows, a meeting room for meals, and one rickety dock. No TV or Internet, which is a blessed holiday in itself. The generator was shut off after 10 p.m. and everything became very dark. But that wasn’t the half of it.

Determined to make a night dive, we were accommodated by a reluctant guide who dropped us off at sunset on the reef, where it drops off into deep water. He claimed they couldn’t run boats after dark, said we could swim back across the lagoon to camp. It was our only chance for a night dive, so we jumped overboard, exploring the reef in twilight. Soon, darkness fell. Grouper dozed under coral heads, while lobster crawled out from their lairs. We swam around coral heads to the edge of deep blue water, and something wasn’t right, we had a bad feeling we shouldn’t proceed any deeper. We didn’t care to see the eye of the tiger, much less meet him, so we eased back to the safety of tall coral heads all around, in eight feet of water. Feeling safer when surrounded by a veritable stone wall, we shut off the dive light and submerged. Floating in black watery space, tiny plankton began to glow in strings of light like green pearls. It was mesmerizing. Our night vision grew more acute and we could make out the dim shapes of coral. This was underwater, on a night as dark as the proverbial black steer’s tookus on a moonless prairie night. After 20 minutes we surfaced with the Caribbean slick as glass, with an incredible Milky Way above and reflected on the water. The entire horizon was black, save for one small light bulb on the end of our distant pier. It was a long swim back across a lagoon 12 feet deep, after a full day of fishing.

Closer to home, making an overnight offshore trip in the Gulf can be a fine experience in the right weather. We’ve made some five-day trips offshore, way out beyond the Flower Gardens. In calm weather on a dark August night the Milky Way can be vivid. If you tie the boat to a well-lit platform (closer to the coast), with lights glaring down, you can’t see the stars. We’ve also spent the night anchored over snapper rocks with a big sky overhead, but you have to keep a sharp lookout for boat traffic.

And then there was Big Bend, where they say the view there isn’t what it used to be, because of clear-cut burning in Mexico. However, with a north wind the sky clears. One March we took a bunch of kids camping there, and the first night a north wind kept blowing, typical spring break weather. Walking in the desert at night, the air was clean and once again the Milky Way stretched out for us, amazing as always.

The kids ran around that desert like a band of wild Indians. Each found a long stick and carried it daily. Our campfires were small, allowing the night sky to burn brighter. It made us wonder what the native people talked about around their own campfires, watching that same sky for centuries. Turns out, they had countless stories about the origins of the Sun, moon, stars and Milky Way, handed down through generations.

In one of their stories, a giant dog flew down from the sky and for several nights ate corn meal stored in a Cherokee village. Alarmed, the villagers grew determined to scare off the dog. The next night they stayed up late and when the dog returned and began feeding, they all jumped out and put up a huge ruckus. The startled dog with a mouth still full flew away forever, spilling a cloud of cornmeal across the sky. To this day, Cherokee people refer to the Milky Way as Gil’ LiUtsun’yi, which means, “Where the dog ran.”