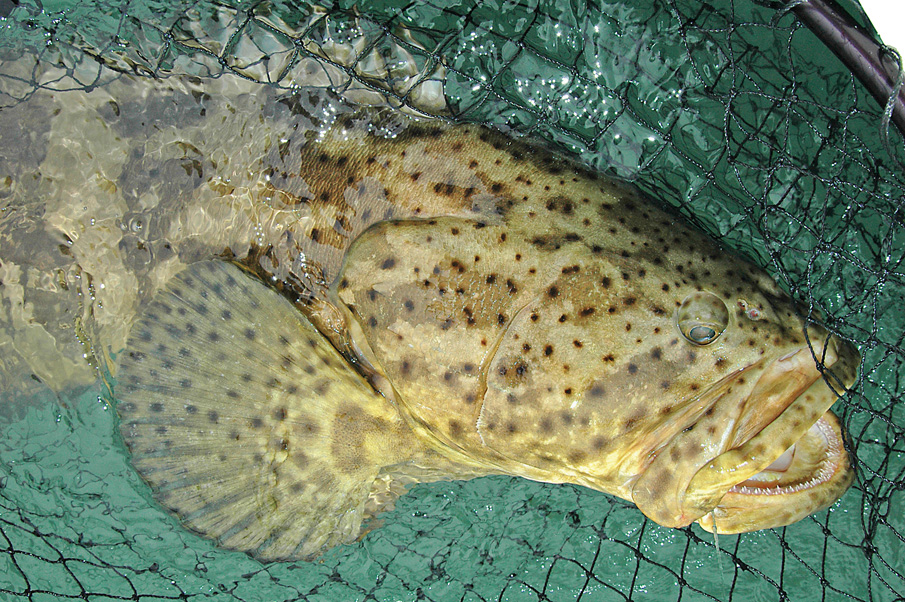 Smaller goliath grouper in the landing net, about to be released.

Texas used to be known for catching monster “jewfish,” which today are called goliath grouper. The name changed only a few years ago, but the jewfish’s name origin apparently dates back to 1697 and before. In his book published that year, William Dampier the explorer logged an expedition to Jamaica, where the Jewish minority there favored the grandest kosher fish. He said: The Jew-fish is a very good fish, and I judge so called by the English, because it hath scales and fins, therefore a clean fish, according to Levitical Law.”

Back in the 1930s, huge ones were landed at the Aransas and Galveston jetties. The old-timers knew how to catch them, but years later it has become something of a lost art. Probably because these fish have been federally protected since 1990. In Florida, with this protection, they’ve become something of a problem, eating countless hooked fish, even blacktip sharks. But in Texas? Nada. We hear nothing about them. They have to be down there in the depths somewhere, around old shrimpboat wrecks, the jetties, and murky waters around old Gulf platforms in state waters. And make no mistake, goliaths are perfectly happy in murky, even milk chocolate muddy water. When they’re hungry, they simply inhale whatever bottom fish is passing by.

This is the most shallow grouper of about 14 species in the Gulf and Atlantic, spending perhaps its entire life in less than 100 feet of water. A big one might lurk right under the dock, at least in warm weather. There is a story from years ago of a big one that lived under the dock at Clark’s Marina in POC. They said when the shrimp boats docked, they would soon dump buckets of shrimpheads overboard, and they’d see the big grouper come up and inhale gallons of heads. Eventually the behemoth was caught. If memory serves, it weighed 300 pounds or so.

Back in our serious spearfishing days at the platforms off Sabine Pass, or the South Padre jetties, we’d see big goliaths, but our light spears practically bounced off them. Our boats were small and we weren’t very far offshore—the serious divers with bigger boats always passed by, heading for blue water much further out. Shooting at a variety of fish species, we became very accurate with the short 3-band guns we had; I even speared pompano a few times. But a goliath? We knew we would need a bigger boat and heavier gear. When we did, we soon landed a pair of big goliaths. The smaller of the two fish dragged me endlessly through bottom murk and pipes overgrown with barnacles like an underwater obstacle course. The bigger fish dragged both of us around until my buddy’s scuba air ran out, leaving me alone. Sensing time was running out, I pulled myself up the cable onto his back and finally steered him up to the boat; the water was only 30 feet deep. Even with a gaff, it was difficult dragging both fish into my 15-foot Thunderbird boat; the gaff almost straightened. We set both fish in the bow, so we could get the boat up on plane, the Johnson 70 horse outboard straining with the heavy load. Back at the Sportsman’s Supply in Sabine Pass, the two fish weighed 165 and 210 pounds on the store scales. Filleting each fish was like cleaning a hog, and I wasn’t impressed with the quality of the meat, with lots of fatty strips. After that, we never speared another. That was the summer of ‘79 and we’ve left them alone ever since, at least while underwater.

But hey, catching one of these giants on a hook and line would liven up any fishing trip, even if they do have to be released. They have to be down there after so many years of protection.

I talked to several old-timers years ago, and they always advised me to use stingrays for bait. Apparently, goliaths are crazy about platter-sized stingrays, like we see so often in shallow water.A goliath will scarf one down like a boneless steak. I’ve seen one video of a hooked cownose ray circling under the boat, and a huge goliath rising to inhale it near the surface. And, pictures of guys on a Florida pass using heavy tackle and frozen stingrays for bait. The rays were easily collected while flounder gigging. These guys would gig and then freeze an entire flat of stingrays, and then peel off a few for their beach trips. The frozen rays worked just fine with goliath grouper. This is not a picky fish.

So, imagine drifting a fresh stingray deep around the end of a Texas jetty, when the tide has slowed. Years ago I scuba dived the end of one jetty, and saw four big goliaths cruising by, averaging about 150 pound each. The water was a very rare blue and the incoming tide had almost stopped. Those big puppies would have been real happy to find a fresh stingray, of which Texas bays are in plentiful supply. After getting hooked, these fish would make a power dive into the nearest hole unless stopped with heavy tackle. With these fish, it’s brute force stopping them or they reach their rocky lair, where they can wait out most anglers. The typical snapper tackle of old, like a Penn 4/0 reel, would not suffice here. Best consider a 6/0 or 9/0 reel.

In Florida I’ve hooked a few goliaths in recent years, often in water as shallow as 12 feet. We caught eight of these fish up to 25 pounds without moving the boat, while anchored near Shark River in the Everglades. It was like fishing a cove at Toledo Bend, the water was so calm with lots of shade trees. However, the water was salty at high tide. We used live pinfish on “knocker” rigs, which is just a one-ounce egg weight knocking against the hook. With a 50-pound mono leader.The water was shallow with little current.

What a region: That incredible maze of sheltering mangrove islands stretches for about 70 miles, from Flamingo to Naples, now the center of the universe for goliath grouper. Perfect habitat for juveniles but also hiding some big ones, too. On a previous trip we stopped at a channel marker in Florida Bay just south of Flamingo and I tossed out a live, 2-pound jack crevalle, and a huge goliath inhaled it within 10 seconds. It was a savage battle at close quarters, more like fighting a manatee, and we had to crank the engine and motor away from the pilings about 40 yards. When the behemoth was finally brought alongside, we took pictures and twisted loose the 20/0 circle hook. The guys estimated the fish at seven feet and perhaps 400 pounds. We kept it in the water; it’s now considered uncool and I think prohibited in Florida, to drag goliaths into the boat for hero pictures. These fish are said to age very slowly and deserve protection. Lip-gaffing one of these heavy fish and holding it up might pop a vertebrae behind the head.

The Texas state record for goliath grouper is still about 550 pounds, and that will be hard to beat. Aside from illegal harvest, an inshore fish of that size is pretty rare these days. However, there has to be plenty of old wrecks off the beach that could harbor a big, residential fish that doesn’t move much, just sits there and inhales passing bottomfish, which are plentiful enough.

It was Gus Pangarakis, a Houston firefighter, who caught our state record goliath grouper at Galveston’s north jetties. That grouper was way bigger than he was. He had a talent for catching huge fish; he also landed the state record sawfish at better than 700 pounds. Sawfish were pretty much wiped out by nets in Texas, and the goliath population laid low perhaps for other reasons. But they’re still out there and their population should be rebuilding.

This summer, I may try dropping a fresh stingray bait around the jetties, just to see what happens. Maybe a mean old bull shark will grab on, something I’m not looking forward to. But if it’s a goliath grouper, it would certainly liven up the day.